Former Penn State athletic physician Dr. Scott A. Lynch has sued the university for more than $50,000 in damages, claiming he was removed from his position as director of athletic medicine after telling athletic officials head football coach James Franklin attempted to persuade him to clear injured members of the football team for play. 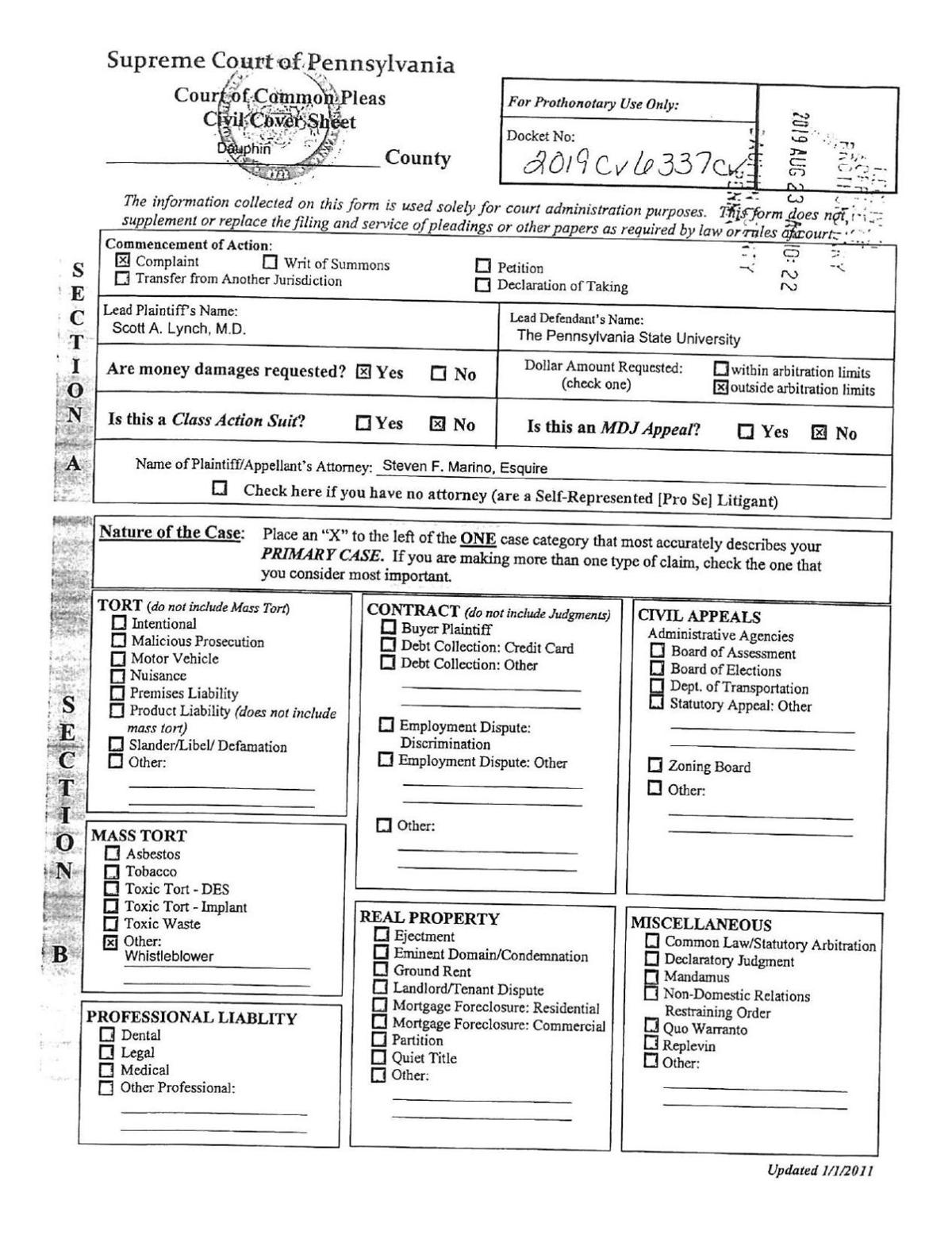 Lynch, a Mifflinburg native and NCAA wrestling champion for Penn State, asserts his removal was in retaliation to his defiance toward Franklin and athletic officials. The lawsuit claims the removal is in violation of Pennsylvania’s Whistleblower Law. Lynch is still employed by Penn State’s Milton S. Hershey Medical Center.

“In February 2019, Penn State Health administrators decided to change leadership for athletic medicine and the delivery of care for Intercollegiate Athletics. This transition was completed with the best interests of student-athletes in mind, given the increasing complexity and growing demands of sports medicine, as well as health care in general.

“While we reject Dr. Lynch’s claims and will vigorously defend our program and its representatives, we remain grateful to him for his five years as director of athletic medicine for Intercollegiate Athletics and for his continued association with Penn State Health.”

Lynch’s lawsuit, in part, alleges, “James Franklin attempted to interfere with the plaintiff’s autonomous authority to determine medical management and return-to-play decisions related to student-athletes.” It also claims “Franklin created a culture and climate which, at a minimum, obstructed full compliance with the aforementioned standards and rules implemented to safeguard the medical management of student-athletes.”

The suit does not mention any specific instances of Franklin influencing a player's return to the field.

Lynch is represented by Steven F. Marino of Marino Associates.

Lynch claims he “refused to relent” despite Franklin’s attempts, and he reported “Franklin’s wrongdoing and infraction” to Penn State athletic integrity officer Robert Boland, as well as to Black, Barbour and Green.

The suit states “on or about January 24, 2019,” Barbour and Green demanded to Black that Lynch “be relieved from his assignment as the Intercollegiate Athletics Team Orthopedic Physician for the Penn State University Football Team and Director of Athletic Medicine for Penn State University.” Black was hired by Penn State Health in 1997.

Lynch believes his removal from his role is a result of his complaints.

The suit references standards safeguarding institutional governance of athletics and highlights rules adopted by the Big Ten Intercollegiate Athletic Conference designed to, “Prevent coaches from (i) having direct responsibility for, or exercising undue or improper influence over, the hiring or supervision of any mender of the medical or athletic training staff who works with the coach’s own team, and (ii) attempting to influence inappropriately any member of the medical training staff regarding the medical treatment of a student-athlete.”

Calls to NCAA and Big Ten officials had not been returned by late Monday afternoon.