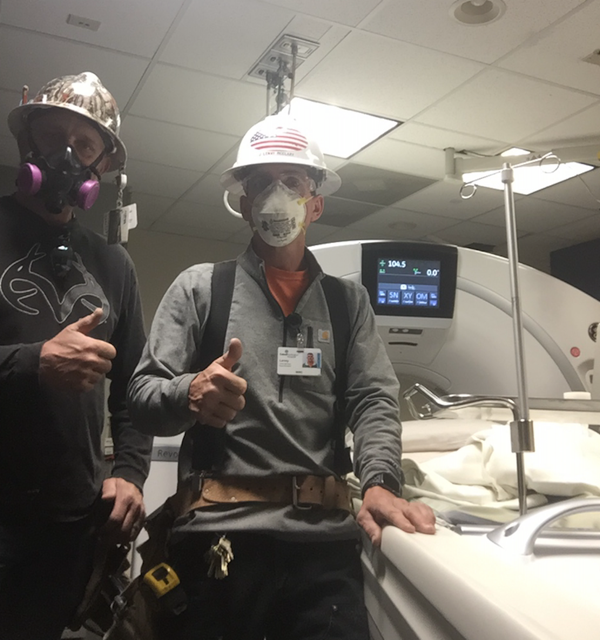 Gary Hall, left, and Lenny McClary wear masks while working for MIRC Construction Services at Cabell Huntington Hospital. They are both members of Carpenters Local 439. 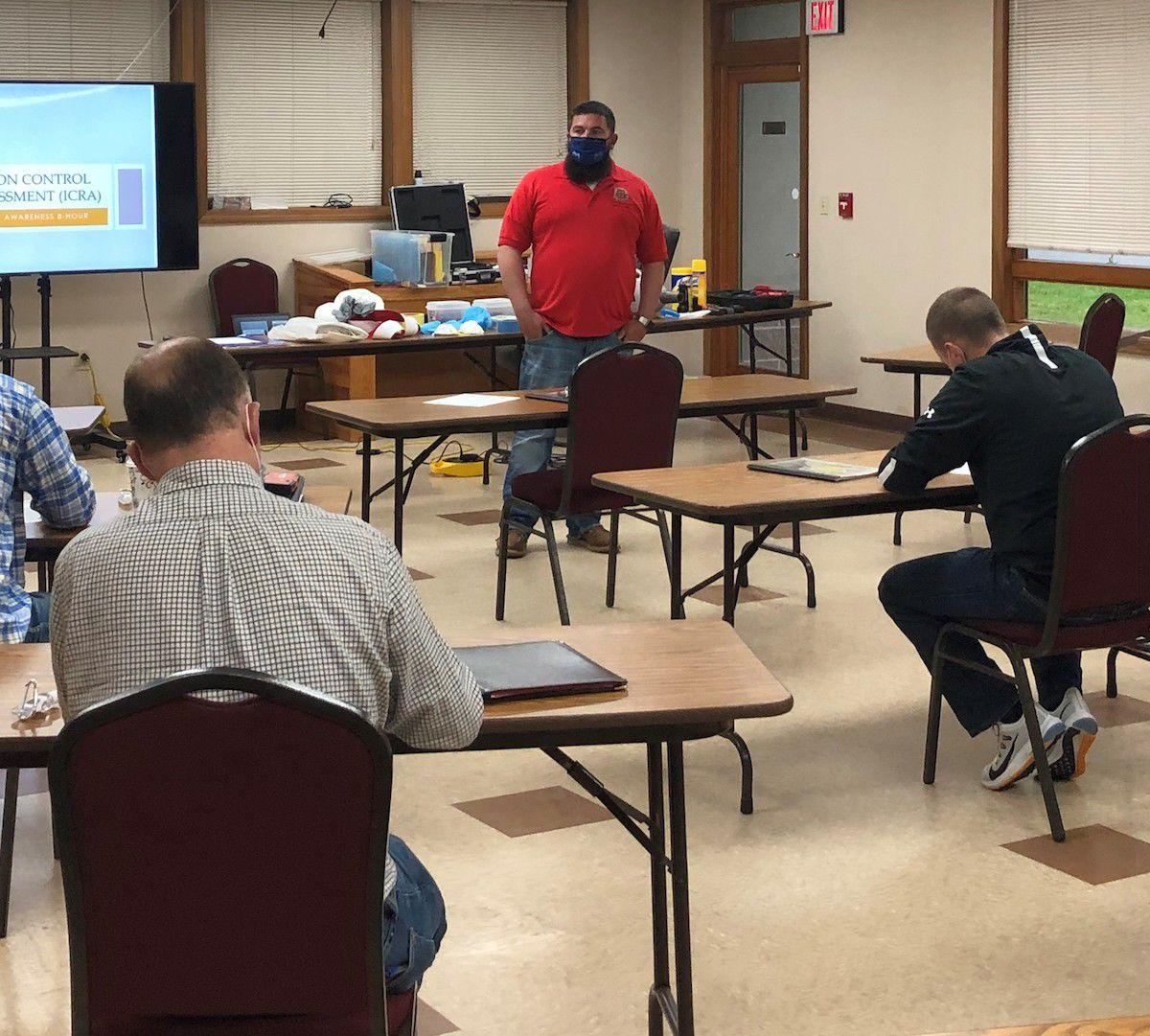 Gary Hall, left, and Lenny McClary wear masks while working for MIRC Construction Services at Cabell Huntington Hospital. They are both members of Carpenters Local 439.

CHARLESTON — Planning is key in the construction industry, but there wasn’t a blueprint for handling the impact of the coronavirus.

On March 24, Gov. Jim Justice issued the statewide stay-at-home order. Justice deemed construction as one of the select occupations considered essential during the ongoing pandemic. That designation, however, didn’t address the concerns and questions about how the industry would function during the pandemic.

“Even though construction is considered essential, there’s been a lot of unemployment, and a lot of places where we work don’t want contractors there,” said Steve White, director of the Affiliated Construction Trades.

With many projects halted in the state, some contractors have been unable to find gigs.

The ACT represents union construction trade workers of various crafts in West Virginia, including boilermakers, carpenters and pipefitters. While some members were able to continue working, others had to file for unemployment. A handful who applied for unemployment, White said, fell between the cracks when the influx of applications were initially filed with Workforce West Virginia.

For contractors, spring and summer mark peak construction season, and it’s the time of year when the ACT members are “usually close to full employment,” White said.

Though ACT employees are encouraged to follow all coronavirus safety guidelines recommended by the Centers for Disease Control and Prevention, White expressed concern over the lack of federal safety standards and requirements for contractors. If anyone on a site “cuts corners,” it could put everyone at risk.

“This [virus] is here to stay in one form or another, and we’re going to figure out how to live with it,” White said. “We’ve worked in chemical plants, around asbestos and worked around dangerous situations. We really need rules and limits set by the government because right now there’s nothing. We just want to go to work and come home like everyone else.”

Another concern is the risk of transmission between local and out-of-state crews. When construction was halted in other states, White said, some workers sought work in West Virginia, which posed a risk of spreading the virus across state lines.

For now, there are still questions that may not yet be answerable.

“If you’ve got one guy changing the filters on an HVAC unit, is it safe? Is that a collection point for the virus?” White said.

From digitizing blueprints for use on iPads to cleaning tools after each use, the Contractors Association of West Virginia has made adjustments to prevent the spread of the coronavirus, said Mike Clowser, the organization’s executive director.

“Almost every project has a job trailer, and as such, most of the meetings are held in the job trailer,” Clowser said. “Under the new normal, members are moving the meetings outside of the trailers and distancing themselves outside. They’re not inside the small trailers with five, 10 or more people standing around.”

When working between rooms, doors are also being left open to prevent contractors from touching surfaces unnecessarily. Physical weigh tickets, which are normally exchanged between truck drivers and the Division of Highways inspectors to document tons of stone or asphalt, are being communicated verbally instead.

“We’re not doing those transfers of paper now,” Clowser said. “That’s something we wouldn’t have been talking about six months ago.”

Clowser, who recently celebrated his 42nd year with the Contractors Association, said he has a unique understanding of why safety is so important because he recently recovered from coronavirus.

“I’ve got a better perspective on why we need to have all of our members working to keep their employees and their families safe,” Clowser said. “I’ve been so impressed by our members, and they’ve done everything possible to make sure their employees are safe when they come to work everyday.”

Over the last few months, Clowser said several opportunities such as the Division of Highways’ spring paving programs have been postponed.

“Road revenues are down because people are staying home and not buying gas or driving,” Clowser said. “Gas tax revenues are down, people aren’t buying new vehicles and sales tax on vehicles is down. The department had to cancel the paving program because of the declining revenues.”

In a national survey of 40,000 Contractors of America firms nationwide, 40 percent of respondents said they were experiencing cancelations or postponements, Clowser said, but in West Virginia, the state chapter, hasn’t yet dealt with many delays as a result of the virus.

If revenues fail to rebound quickly, he said, that could change. But for now, he doesn’t anticipate that to be the case.

“My impression is that the major projects that are planned, at some point, will return to a normal,” Clowser said. “It may be a new normal for how we operate going forward, but if there was a school project needed that will still hopefully continue to be ongoing. Those projects, providing those are good projects today, will be a good project when we get back to it.”

The Contractors Association has focused on sharing the webinars and training videos that help employees protect themselves and each other. On April 9, state members participated in the Associated General Contractors of America Coronavirus Safety Stand Down, during which they took a portion of the day to discuss safety, Clowser said.

“Contractors are very innovative people, and I’ve been very impressed by how they’ve been able to modify given this new normal and business environment,” Clowser said. “I think there will be a lot of good things to come out of the pandemic in how we operate and do things differently going forward. Always take a negative and turn it into a positive.”

When the virus broke out, Bryan Hoylman, president and CEO of the Associated Builders and Contractors of West Virginia, said the statewide trade association started training early.

In a matter of six weeks, a lot changed for the organization. During the first two to three weeks, he said, the primary goal was to “shift gears as an organization” by compiling information and sharing with members often so they were always in the know.

“We developed countless toolbox talks for supervisors and employees for each day, updating them on new policies and social distancing,” Hoylman said. “We had HR toolkits for employees in offices and project managers to use if they want to and other policies for working at home. We covered every angle of safety and policy working with our safety team.”

Though much is dependent on how the economy recovers, Hoylman remains optimistic.

“We anticipate the downfall will be short and fierce,” Hoylman said.