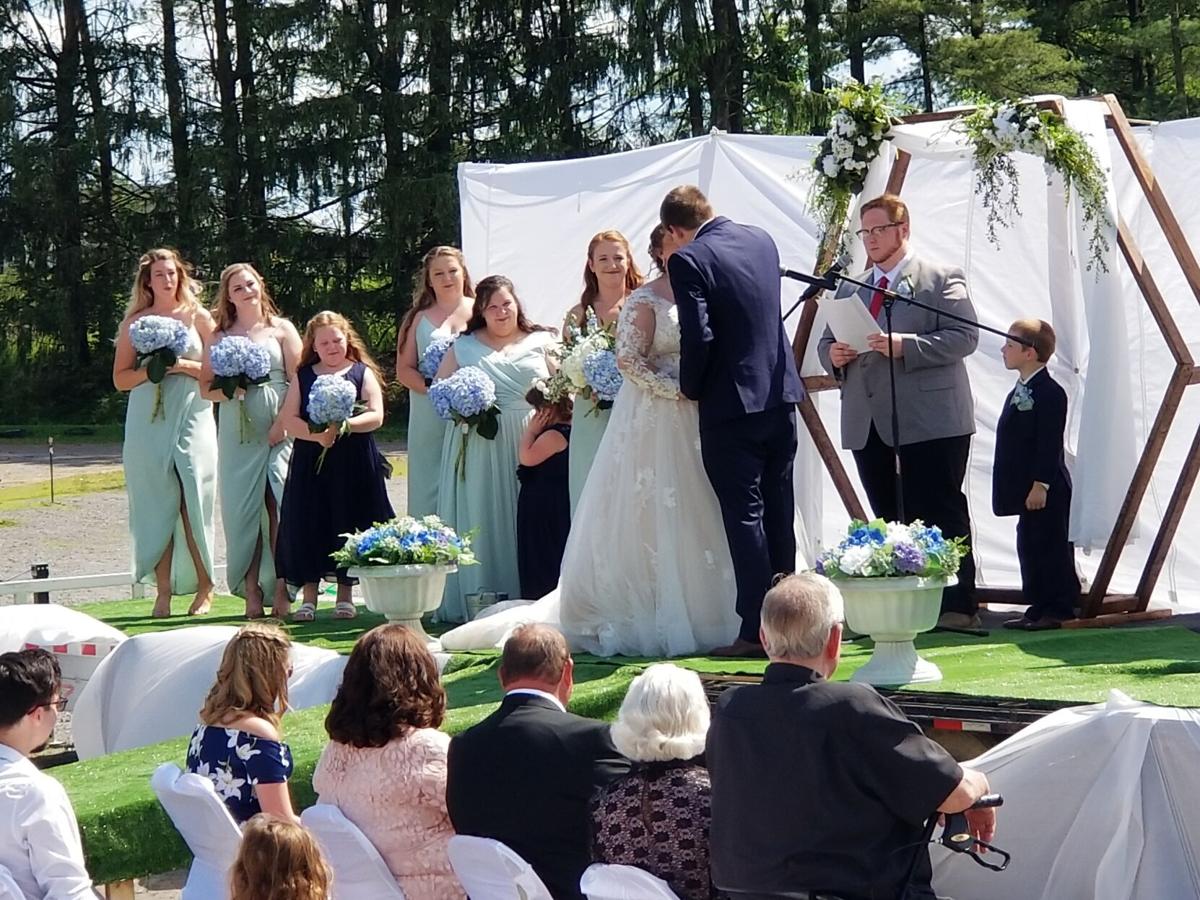 You may kiss the bride. Chris and Meghan Lewis were married last Saturday at the Sunset Drive-In in Shinnston under safe distancing guidelines for the coronavirus. 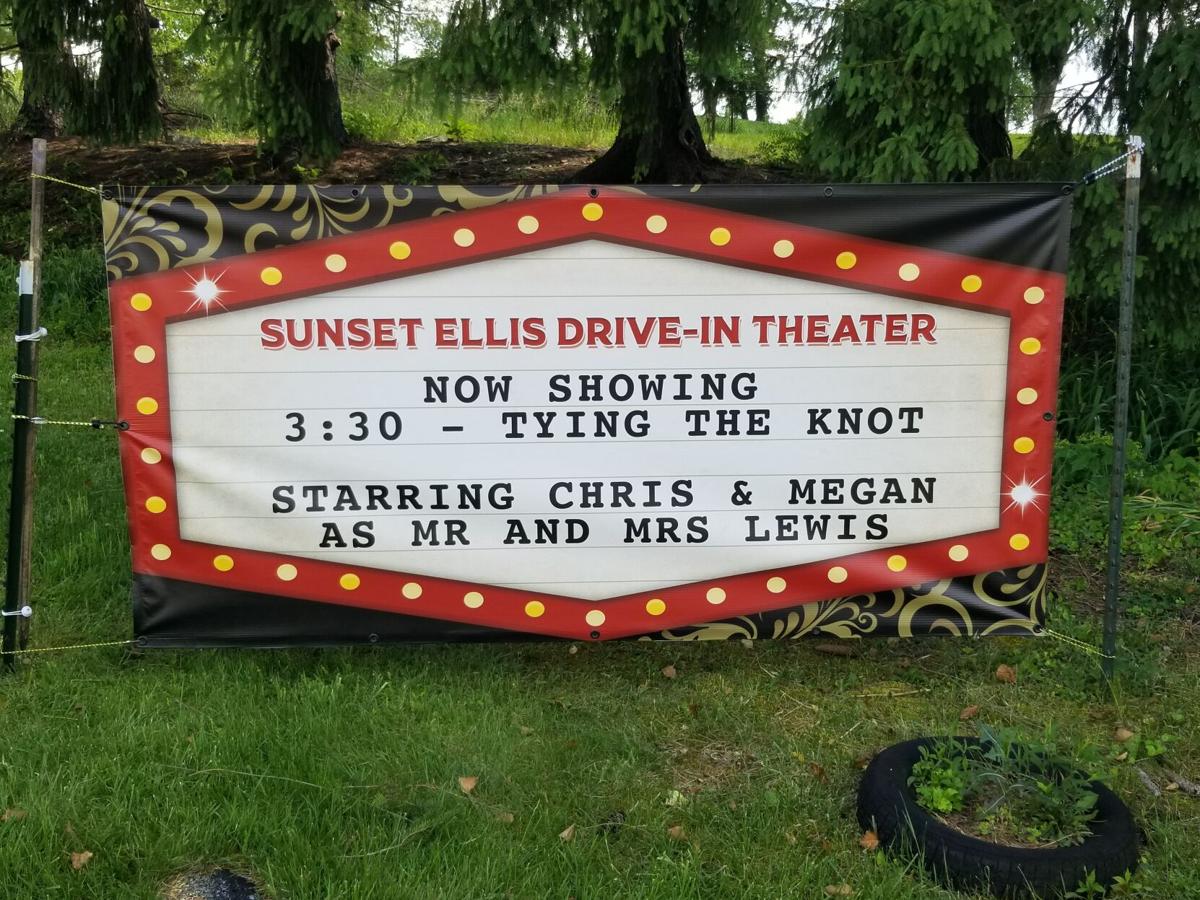 The sign at the Sunset Drive-In on Saturday says it all. The theater hosted the wedding for Chris and Meghan Lewis. 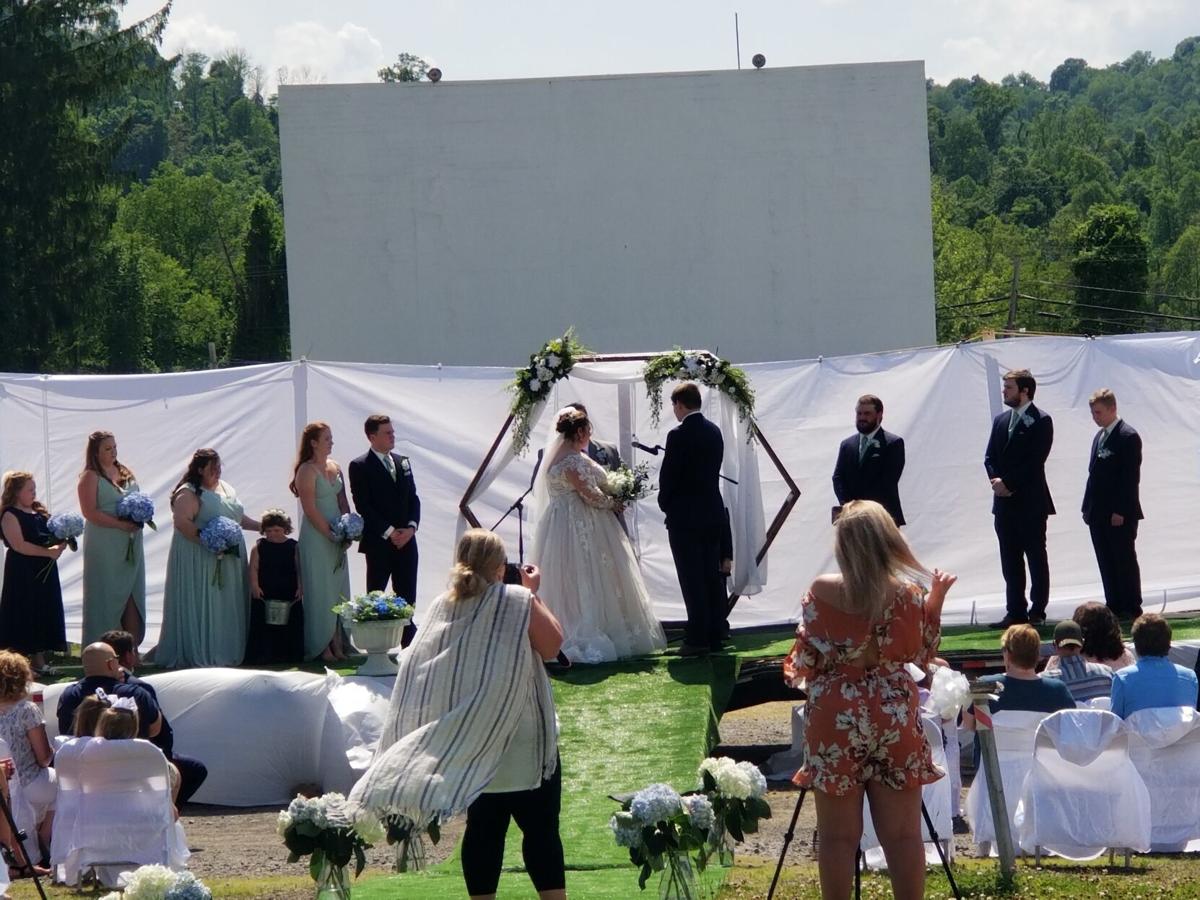 Meghan Weber, left, became Meghan Lewis on Saturday as she married Chris Lewis at the Sunset Drive-In near Shinnston.

You may kiss the bride. Chris and Meghan Lewis were married last Saturday at the Sunset Drive-In in Shinnston under safe distancing guidelines for the coronavirus.

The sign at the Sunset Drive-In on Saturday says it all. The theater hosted the wedding for Chris and Meghan Lewis.

Meghan Weber, left, became Meghan Lewis on Saturday as she married Chris Lewis at the Sunset Drive-In near Shinnston.

SHINNSTON — As a little girl, the blushing bride admitted a few minutes after her wedding ceremony had ended, she had never dreamed of marrying her beloved at the Sunset Drive-In Theater just south of Shinnston on Route 19 before a double feature of Bloodshot and Fantasy Island, both rated PG-13.

So here she was, in her white bridal gown on an Instagram-perfect June wedding day, surrounded by socially-distanced family and friends, some in their cars, some sitting on lawn chairs or standing and chatting, all of them there to witness the wedding ceremony of Chris and Meghan Weber Lewis.

“We had a church wedding arranged and then COVID-19 happened,” said the new Mrs. Lewis. “I called my mom who was like ‘What are we going to do?’ and made the joke ‘I’ll get married at the drive-in.’ My mom didn’t think it was a good idea at first, but when the church called and said they couldn’t perform the ceremony because of the coronavirus lockdown, she said ‘Let’s call the drive-in.’”

It was also a first for the Sunset Drive-In, the last operational drive-in movie theater in North Central West Virginia. Having opened in 1947, the drive-in has hosted flea markets, concerts, and thousands of movies, but never a wedding.

“The owners of the drive-in told us it’s the first wedding ever to take place here,” said Chris Lewis.

The groom also pointed out his wedding has being held on, appropriately, on National Drive-In Day.

The stage on which the ceremony took place consisted of two flatbed trailers put together. Seating for family was provided near the stage. Vehicles fanned out from the stage area across the tiered drive-in layout and wedding attendees listened to the exchange of vows on the drive-in’s closed-circuit radio broadcast.

Instead of a reception, each car in attendance was given its own pizza.

The entire backdrop was assembled the morning of the wedding and torn-down before movie gates opened.

“Today, two people joined together to make a new family. And while I’ve never performed a wedding ceremony a drive-in theater, it was a beautiful opportunity to help two people to commit to each,” said Young.

The wedding officiant said the ceremony was conducted with COVID-19 best practices in mind.

“The cars are parked far enough apart to adhere to social distance protocols. I think it’s safe to do something like this.,” said Young. “The coronavirus pandemic has unfortunately forced many people to change their wedding plans this summer, but as we see with Chris and Meghan, people can get creative and it all works out wonderfully.”

Meghan Lewis recently graduated from Marshall University with a degree in radiology, while Chris Lewis is self-employed. Both are graduates of Grafton High. The couple resides in Grafton.