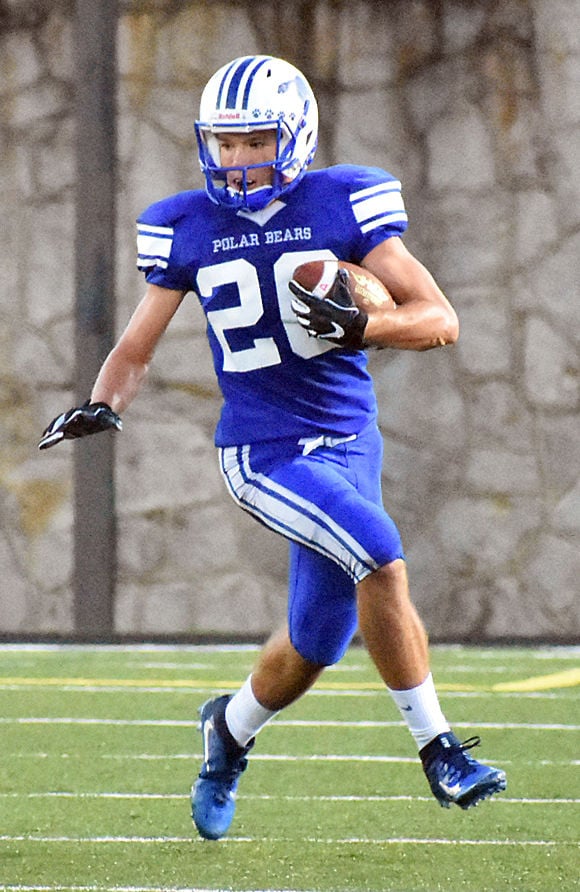 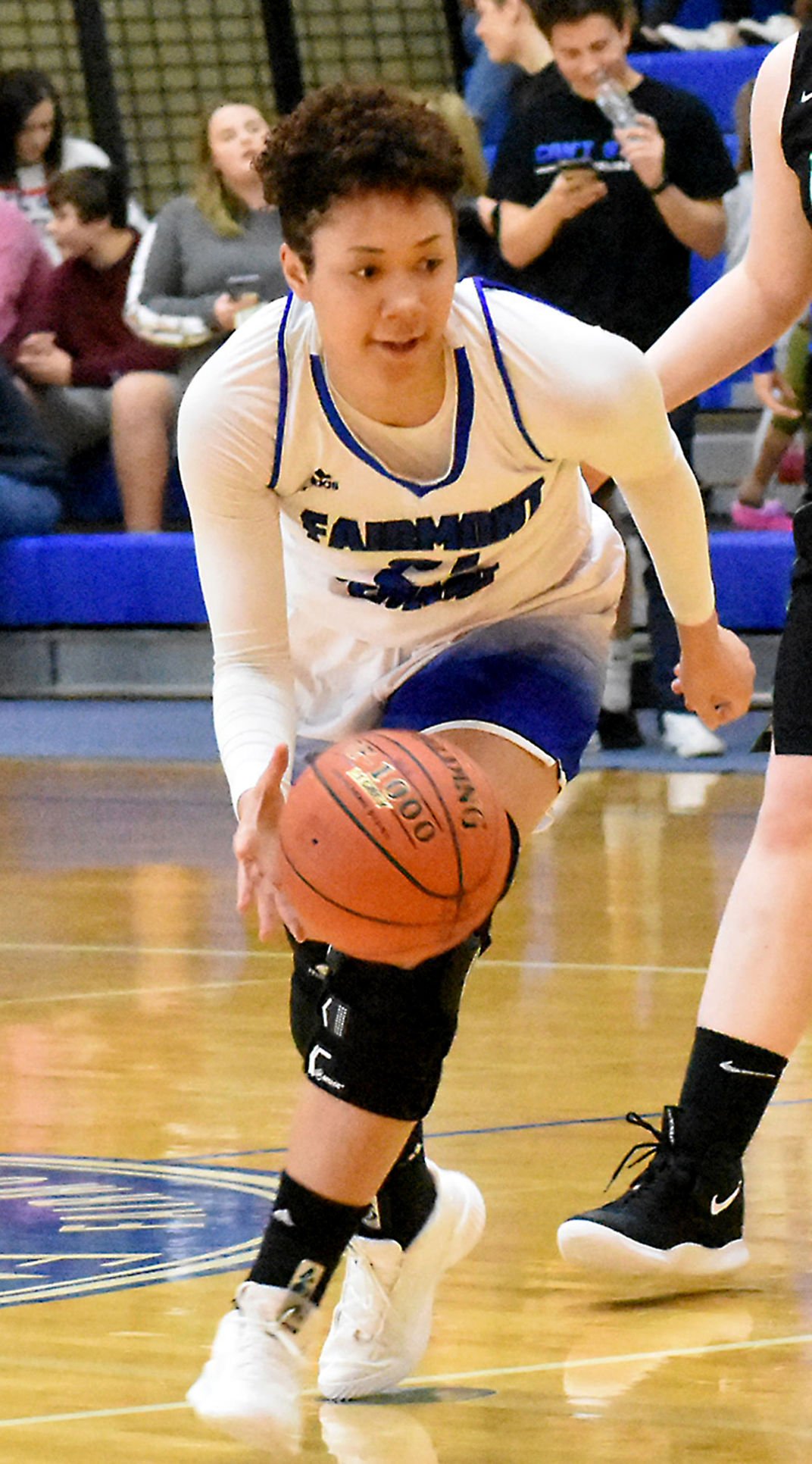 FAIRMONT — Senior athletes from across the state will compete on the high school circuit for one last time this weekend with the annual North-South All-Star games in boys’ basketball, football and girls’ basketball slated for today, on Saturday and Sunday, respectively.

Marion County will have multiple players in each of the games, with eight total players dotting the respective rosters across the three sports.

Seven of those eight players hail from Fairmont Senior. Connor Neal, Rhett Heston and Exavier Posey are on the north roster for football, Zyon Dobbs and Jalen Bridges for boys’ basketball, and Anysa Jordan and Courtney Wilfong for girls’ basketball. The lone county player outside of Loop Park is North Marion’s Desmond Fluharty, who will suit up for the north in football.

Neal, a Fairmont State University commit who finished his high school career as Fairmont Senior’s all-time leader in passing yards (6,449) and passing TDs (79), is just one of FSHS’s competing seniors flush with accomplishments as the Polar Bears say goodbye to an all-time senior class across many sports.

“Just knowing this is the last time I wear any Fairmont Senior gear into the field of play, I’m just taking it all in as a last experience,” said Neal, who led FSHS to an undefeated season and state title while throwing for a school-record 3,620 yards and 46 touchdowns en route to winning the Kennedy Award as the state’s top player as well as the House Award as the State’s top quarterback.

In total, Fairmont Senior’s seven seniors competing in this weekend’s all-star games have combined to appear in 10 state championship games, win five state titles and earn 11 all-state honors, with nine of those coming as first-teamers.

Neal and Bridges also won the Kennedy Award and Bill Evans Award this past season as the state’s top player in their respective sports, while Jordan won the Huff Award, which is given annually to a senior whose contributions go beyond the statistics.

Bridges and Dobbs, both 1,000-point career scorers at FSHS, set a historic precedent during their high school careers, playing in the Class AA state title every year of their career, winning the championship in their freshman and sophomore seasons. Over their four seasons, Fairmont Senior went 99-11 overall for a .900 winning percentage.

Jordan and Wilfong played for the Class AA state championship in three of their four seasons playing for coach Corey Hines at FSHS, with the only season in which they didn’t being their junior years when Jordan missed nearly the entire season with a torn ACL. The Lady Polar Bears took the title in two of those three seasons, winning in 2017 and 2019. Fairmont Senior went 91-19 over their four seasons for an .827 winning percentage.

Neal, Heston and Posey appeared in three straight Class AA state title games in football, winning it all this past season with a 23-13 win over Bluefield in a record-shattering 14-0 undefeated season. This year’s 11-man senior class for the Polar Bears was the winningest in program history at 46-8 for an .852 winning percentage.

The seven FSHS seniors selected for this weekend’s all-star games finished their careers with an absurd combined overall record of 236-38 for an .861 winning percentage.

Bridges, who has announced he will attend Scotland Campus prep school to prepare for a collegiate career, has fielded a wealth of Division I offers and interest, picking up his most recent on Wednesday from N.C. State. Bridges, a two-time all-state first teamer, averaged 21.6 points, 6.7 rebounds, 2.2 blocks and 1.9 steals on insane 62/51/78 shooting splits en route to winning state player of the year.

Dobbs, meanwhile, who just this week announced his commitment to James Madison of the Colonial Athletic Conference, is a three-time all-state first teamer and the lone boys’ basketball player in state history to start four state championship games. This past season, he averaged 16.0 points, 6.1 assists, 5.5 rebounds and 1.8 steals for the Polar Bears.

Jordan and Wilfong, who will play in the comforts of Marion County at East Fairmont High School in Sunday’s girls’ basketball North-South for team North, each earned all-state honors this past season for the state championship Polar Bears. Jordan, who has committed to continue her career at Eastern Kentucky, was a two-time first-team all-stater for the Polar Bears, including this past season when she captained the squad after averaging a double-double with 20 points and 10 rebounds a game.

Wilfong, an established defensive menace throughout her career, nabbed her first all-state recognition as a senior this season, where she was named to the Class AA second team.

Fairmont Senior’s football trio of Neal, Heston and Posey will take the field on Saturday with a familiar face on the sidelines, with offensive coordinator and play caller Mark Sampson also representing the Polar Bears as an assistant coach for the North squad.

“It’s cool having people I know also here so we can experience it together, and then having Coach Sampson here — he’s of course a savant, always — to make sure everyone is on the same page, that’s a huge help,” Neal said. “There are a couple of good plays up the sleeve, but I don’t want to give anything away.”

Neal, who is one of four quarterbacks listed on the North team, finished this season completing 211-of-282 for 3,620 yards with 46 TDs versus a mere three INTs to win the Kennedy Award. He also captained the all-state first-team, his second career all-state nod after making the second team as a junior.

“It’s a cool challenge,” Neal said of the North-South game’s outlook. “I’m just going to spread the ball around as best I can, but I think that’s also going to help me playing at the college level because all of those receivers are going to be good too, so it’ll be the same type of thing.

“Seeing how much talent there is down here, it’s crazy to watch us all click; everybody knows what they’re doing, everybody contributes different things.”

Heston, who has committed to continuing his football career collegiately at West Virginia, emerged as a one-man wrecking crew on both sides of the ball this season, and is fittingly listed as a utility player offensively and defensive end on the North roster. He finished his senior season with 684 rush yards, 329 receiving yards, 45 tackles, 12.5 sacks, 17.5 tackles for loss and 17 total touchdowns en route to earning first-team all-state honors.

Posey, who was named all-state honorable mention and received consideration for the Fulton Walker Award as the best special teams player in the state, is listed as a wide receiver and defensive back on the North team. He tied with his brother, Elijah, for a team-high six interceptions this past season, two of which came in the state championship game. Posey also caught 15 passes for 144 yards and averaged 22.6 yards per punt return, including four return TDs.

Fairmont Senior’s triad will be joined in the county ranks by Fluharty, who turned in his marquee senior campaign for the Huskies. Fluharty, who is listed as a utility player and defensive back, finished his senior season at NMHS with 1,431 rush yards, 186 receiving yards and 18 total TDs as he earned a spot on the all-state second team.