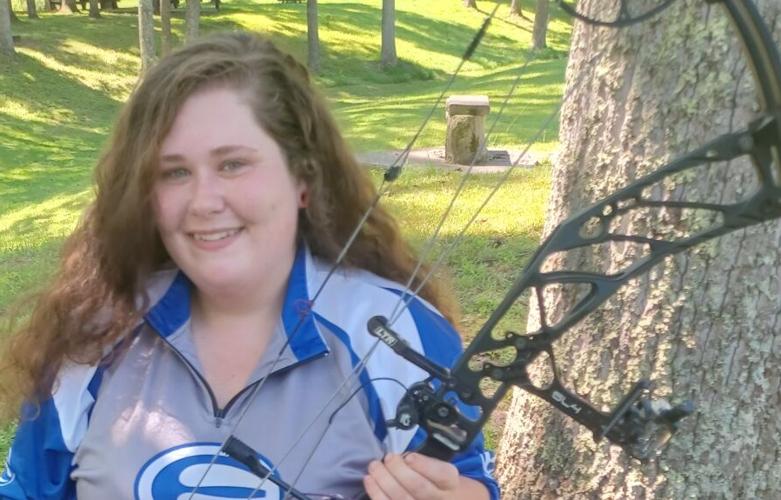 Tiffany Greathouse, pictured with her bow, a target, and several awards the archer has won throughout the years. 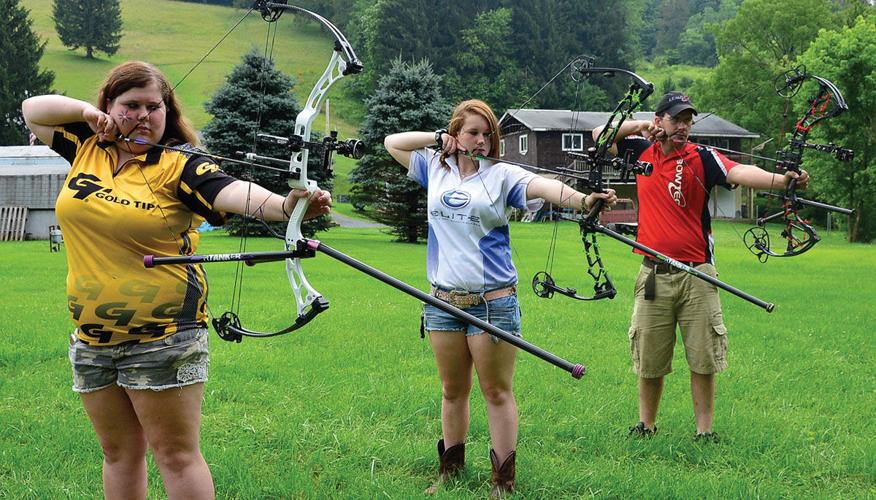 In this photo from 2015, Tiffany Greathouse, at left, shoots against, Ashley Payton and Travis Payton. 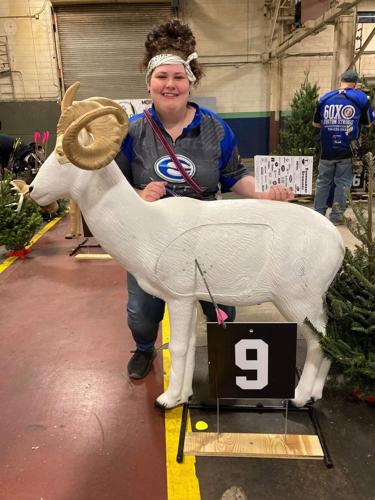 Archer Tiffany Greathouse is always up for a laugh as well. Here, she poses with a mountain goat archery target.

Tiffany Greathouse, pictured with her bow, a target, and several awards the archer has won throughout the years.

In this photo from 2015, Tiffany Greathouse, at left, shoots against, Ashley Payton and Travis Payton.

Archer Tiffany Greathouse is always up for a laugh as well. Here, she poses with a mountain goat archery target.

“You shoot for two days, and then at the end of the two days they take the Top 5 shooters from every class and they go out and shoot totally different courses for a third day,” Rodney Greathouse, Tiffany’s father, said.

With Vermont, Ohio, Virginia, Pennsylvania and West Virginia represented in the Top 5, Greathouse — who attended Fairview Middle School and North Marion High — had her work cut out for her.

After the competition had ended, her father, a director for the championships who was overseeing a different competition at the time, got a phone call.

“She called me, and was a little bit quiet, and my heart kind of sank,” Greathouse said. “I thought 'Ah, she blew it.'

“But then she said “Dad, I got her by two points.” I’m not ashamed to say it, Dad had to take a moment by himself. It’s that big a deal.”

Tiffany Greathouse’s world championship win was the culmination of a comeback to bowhunting, and also a continuation of what has been a part of her life since she was a six years old.

Rodney was a longtime bowhunter and competitive shooter himself, and the apple, it seemed, did not fall far from the tree.

What could have been thought of as a passing interest quickly revealed itself as budding enthusiasm.

As a teen, Tiffany was involved in a local 4H club, that, at its core, teaches character development and offers youth opportiunites to explore a range of different hobbies and activities— including, as Tiffany would find out, archery.

“I took her to the meeting, it was at her school,” Rodney said. “And they had a big table laid out there with all kinds of projects, and the kids were supposed to walk around the table and pick what project they wanted to do.”

“They had a bunch of activities you could do, so of course archery was the first one I grabbed,” Tiffany said.

After that, Tiffany took on archery as a serious pursuit, going far and wide to enter into competitions and hone her craft as she grew up.

“That’s how it was for many years,” Rodney said. “Ever since she was a little girl, her and I would load up and go all across the country to different events. It was pretty awesome, these events were held in places where there were other things to do, touristy stuff. Basically every month we had a little vacation.”

And while the trips made for nice “mini-vacations,” they also proved that the young Greathouse had quite the aptitude for archery since she began competition at just seven years old.

“Down in Florida they have an organization called the ASA [Archery Shooter’s Association], it's just like the IBO but only in the south,” Tiffany said. “I used to have a crowd follow me around whenever I was in 4H and then in field competitions.

“At the risk of sounding like bragging, there were many events where grown men would fuss about having to shoot against her,” Rodney said. “It was just a natural talent that she has.”

Along the way, Greathouse claimed the crown in a variety of different competitions, including winning IBO championships in West Virginia. As time went on though, other things inside Tiffany’s life had to take priority.

Greathouse took a break as she had children, needing to shift her efforts away from archery for some time. But after four whole years, she decided to pick up her bow again.

"This year was my first year back into it," Tiffany said.

It didn’t take long for Greathouse to recapture that competitive spirit. After qualifying for the World Championships, Greathouse took off to Seven Springs Mountain Resort, in Champion, Pennsylvania, the site of the tournament.

Shooters from all over the USA, as well as Australia, South America, Central America, France, Canada, Italy, Spain, South Africa, and elsewhere converged for the IBO World Championships across different age ranges and skill classes, numbering over 1,700 total competitors.

After her break, Greathouse was in the Beginners class, with the returning archer using a 60-pound hunting bow.

"I was using a bow that I could pick up right now and go shoot a deer with it," Tiffany said.

After three days of competition ending on Aug. 14, Greathouse found the top of the slope she had returned to climbing after four years and did it with a newfound attitude.

"I took the year to pretty much just have fun with it,” Greathouse said. “I was in a whole different class in the women's group. Before I'd quit, I was in the youth group and it was all high-strung, very tense, very competitive. I came back into it with a commitment to not be like that, and to just have fun with it — and, well, I won."

Greathouse said she will be moving up next to the “Amateur” with the goal of going pro by the end of three years.

For the present time however, Greathouse’s triumphant return finished with a storybook ending.

"It was always a dream of mine to win the worlds,” Greathouse said. “The first day I was winning, the second day I ended up down two points, and then the final day I came back. I won't lie and say I didn't cry. It's mine and my dads' hobby, that's our bonding experience, and to be able to share that with him, it really meant a lot to me."

Father and daughter got to celebrate Tiffany’s win in a sport they’d both done all their lives. Rodney had shot at the IBO World Championships before, and was by Tiffany’s side when she shot her first deer and her first elk. Tiffany’s eldest son just turned five, and she recently gave him his first bow — a sign that more treasured memories may yet come by way of bow and arrow.

"Honestly, I can't remember a time it wasn't a part of my life,” Tiffany said.