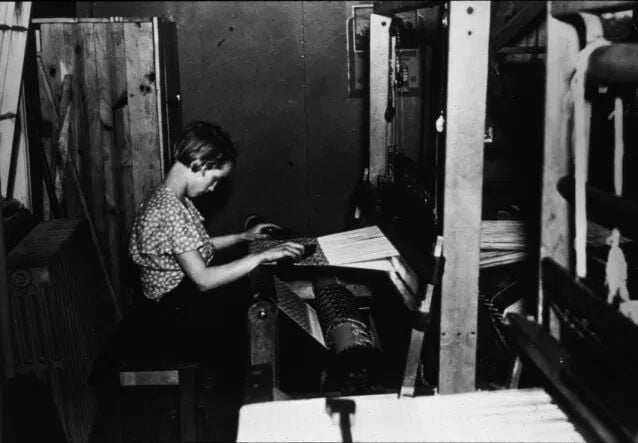 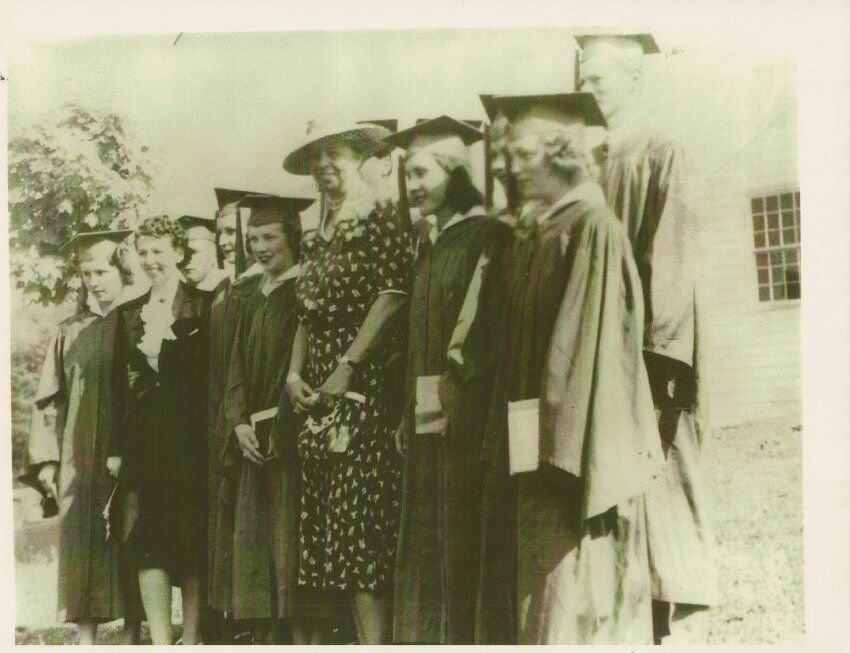 First Lady Eleanor Roosevelt, third from right, attended the graduation of one of the first classes to come out of Arthurdale High School. 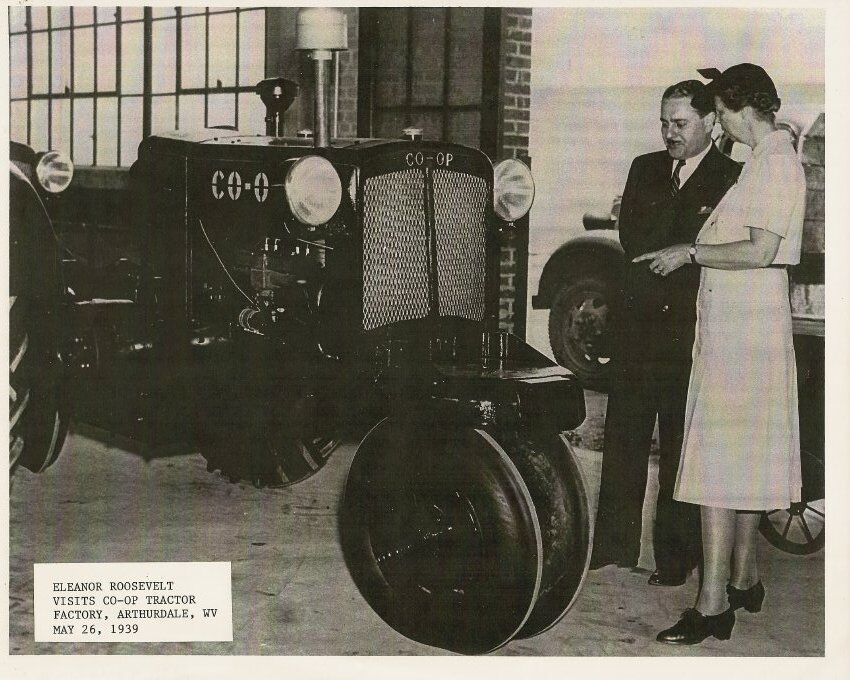 Eleanor Roosevelt visited the tractor factory that had been built in Arthurdale. 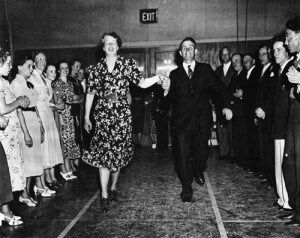 The first lady danced at the community square dance in Arthurdale during the first years of its existence. 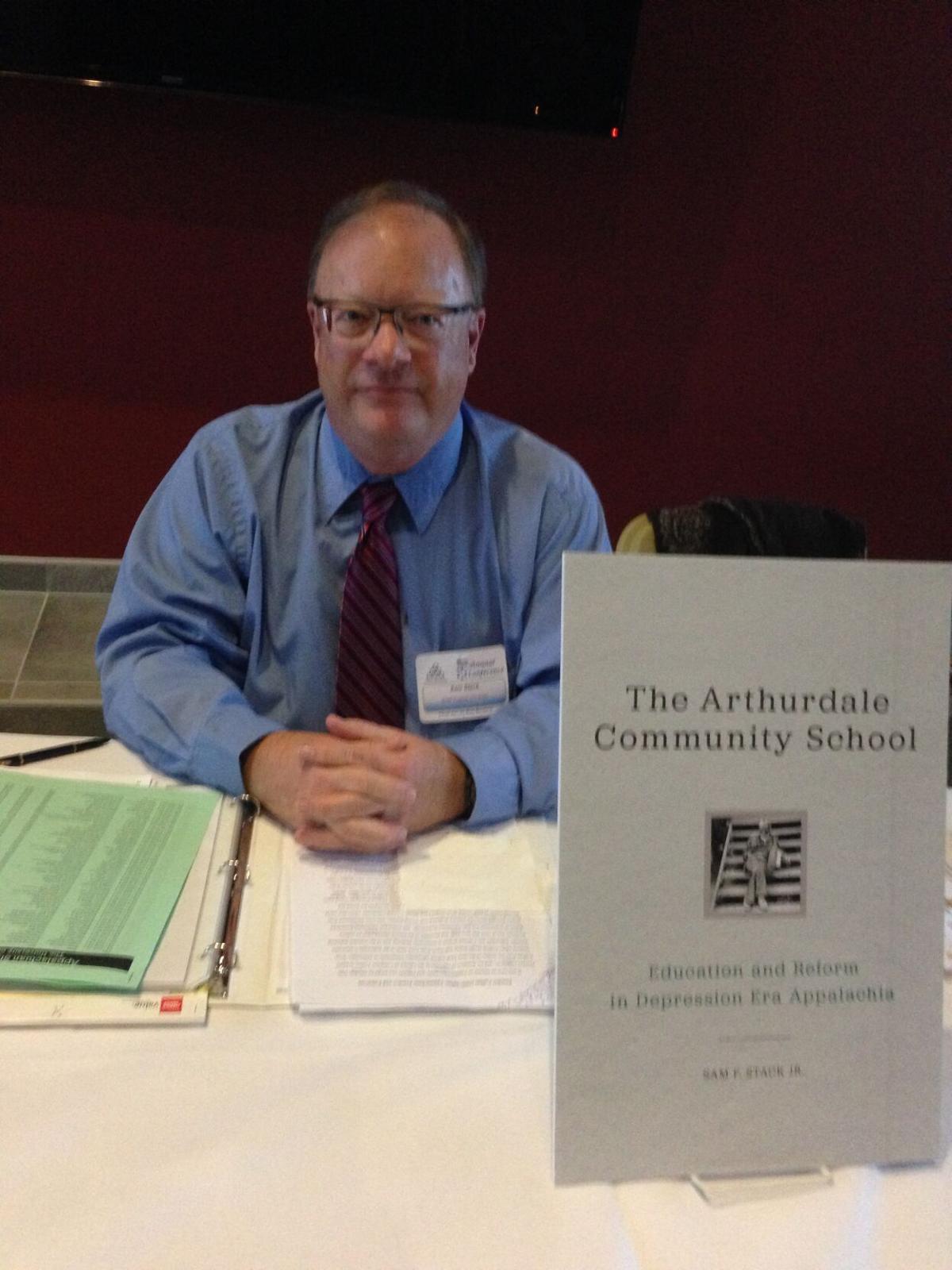 Sam Stack at a book signing for his book on the topic of the school at Arthurdale. This was taken at the Appalachian Studies Association.

First Lady Eleanor Roosevelt, third from right, attended the graduation of one of the first classes to come out of Arthurdale High School.

Eleanor Roosevelt visited the tractor factory that had been built in Arthurdale.

The first lady danced at the community square dance in Arthurdale during the first years of its existence.

Sam Stack at a book signing for his book on the topic of the school at Arthurdale. This was taken at the Appalachian Studies Association.

The Great Depression had America in its grasp, and President Franklin D. Roosevelt set his eyes to a community in West Virginia called Scott’s Run.

At the time, the small town was a five-mile long hollow in the backwoods of Monongalia County, named for the winding creek that ran through the town and nearby local communities.

The town was filled with jobless, former coal miners who had relied on the local mines for their livelihoods. However, most of the mines had closed up due to the Depression.

In 1933, a reporter named Lorena Hickok came to West Virginia to inspect the Appalachian coalfields and called Scott’s Run the worst place she had ever seen. Hickok said of the housing, “most Americans would not have considered fit for pigs.”

The first lady saw this as an opportunity to try out an idea. The project was mostly carried out by the short-lived Subsistence Homesteads Division with much personal involvement from the first lady herself. According to historical documents, within two weeks of the first lady’s visit, plans to create Arthurdale began in Washington.

The government purchased 1,200 acres of land in Preston County from a man named Richard Arthur, whose surname would become part of the town’s name.

“There’s no question it was a test run,” said Sam Stack, a West Virginia University professor who studies the history and philosophy of education, and author of the book, “The Arthurdale Community School.” “They called it a ‘back to the land’ movement.”

Faculty at WVU led a selection process to determine which families would be chosen as homesteaders in the new planned community. The major requirements to be one of the first 50 homesteaders was basic farming knowledge, being physically fit and having an acceptable level of intelligence.

Due to these restrictions, the majority of the first 50 residents were white, despite there having been an abundance of immigrant and Black families in Scott’s Run at the time.

“The idea was to move people out from the areas where they lost work due to the closure of the coal mines,” Stack said. “The people were highly selected and mostly white. In the 1930s, West Virginia was a Jim Crow state.”

Those who moved into the town had to rent their homes and grow and produce their own food. The idea was to keep people from flocking to the already overcrowded cities and allow them to live off the land and work and provide for themselves.

The planned town was far over budget and government officials considered it a failure even before it really got going. But Eleanor Roosevelt refused to give up her pet project and continued pushing on. The town included a store, a farm, an inn, a barber shop, a service station and an industrial factory. The federal government lost money on each of these amenities.

“The Republicans hated it,” Stack said. “They saw Arthurdale as a socialist experiment. Anything that went wrong with Arthurdale was blamed on FDR and his policies.”

Arthurdale and other similar planned communities became a headache politically for FDR and his cabinet. Although many of the facets of these communities were seen as a failure, one area stood out as a success even to today — the school.

“Historians who have written about Arthurdale would suggest that [the school] was one of the more successful parts of the venture,” Stack said.

The school was a central part of Eleanor Roosevelt’s vision for what Arthurdale would become. The first lady was a fan of American philosopher John Dewey and his ideas about the role a school should play in a community. Stack’s book focuses on Dewey’s concepts about schools.

“Mrs. Roosevelt wanted the children at that school to have a progressive education,” Stack said. “She was very cognizant of new educational ideas going on and I think that had a lot to do with it.”

From 1934-1936, Elsie Ripley Clapp served as administrator of the Arthurdale School. A student of John Dewey, Clapp saw the school in Arthurdale as a great opportunity to create a community school.

Students learned through hands-on activities rather than theoretical learning and undertook projects related to agriculture and construction. The students also learned about their Appalachian culture. The first lady donated books, money and supplies to the school.

When the school opened in the fall of 1934, the school buildings were not complete. Determined to begin the education of the children in Arthurdale, Clapp set about placing the students in various community buildings.

The elementary school held classes in the Arthur Mansion, high school students learned in the Center Hall, and the nursery school filled the space newly completed by homesteaders at the center.

This “progressive education” curriculum was much different from the usual lectures and tests. Second graders learned about construction by watching the workers build the homes throughout Arthurdale and put their knowledge to practical use by building their own homestead community.

“Progressive education, to me is a very community focused education,” said Stack. “It’s very attentive to the history of the community, the culture. The purpose was to prepare kids for participating in a democratic society.”

Clapp and her educators were only in the Arthurdale schools for two years, after which, in 1936, the Preston County Board of Education took over control and reverted the schools back to the usual curriculum.

“These were poor kids from coal mining camps,” Stack said. “The first lady believed these kids needed a very special kind of education and that’s where progressive education comes in.”

Stack says that Eleanor Roosevelt and others who believed in progressive education at the time said that life in the coal camps was a terrible environment for the children, calling it, “social Darwinism” where only the strong are worthy of survival.

But in the 1930s, progressive education was not a new idea.

“At the time progressive education was largely in private schools,” Stack said. “Arthurdale was very unique in that it was a public school that was adopting progressive ideas and offering them to poor kids.”

Today, we can learn from the history of Arthurdale and see what the role of education in a community should be and how it affects the group as a whole, Stack said.

“I agree with the educational philosophy at Arthurdale,” Stack said. “What [education] should really be all about is preparing kids for participation as citizens in a democratic society. I think Arthurdale did the best they could. There’s no question that the school... created a sense of community among Arthurdale people, adults and children alike.”

In 1984 the community celebrated the 50th anniversary of its homesteading. The celebration resulted in the establishment of Arthurdale Heritage Inc., a nonprofit organization whose mission is to preserve the historic community of Arthurdale.

Tours of the buildings and community are offered still today. Information about the Arthurdale Heritage can be sent to their email at ahi@ArthurdaleHeritage.org or called in at 304-864-3959.