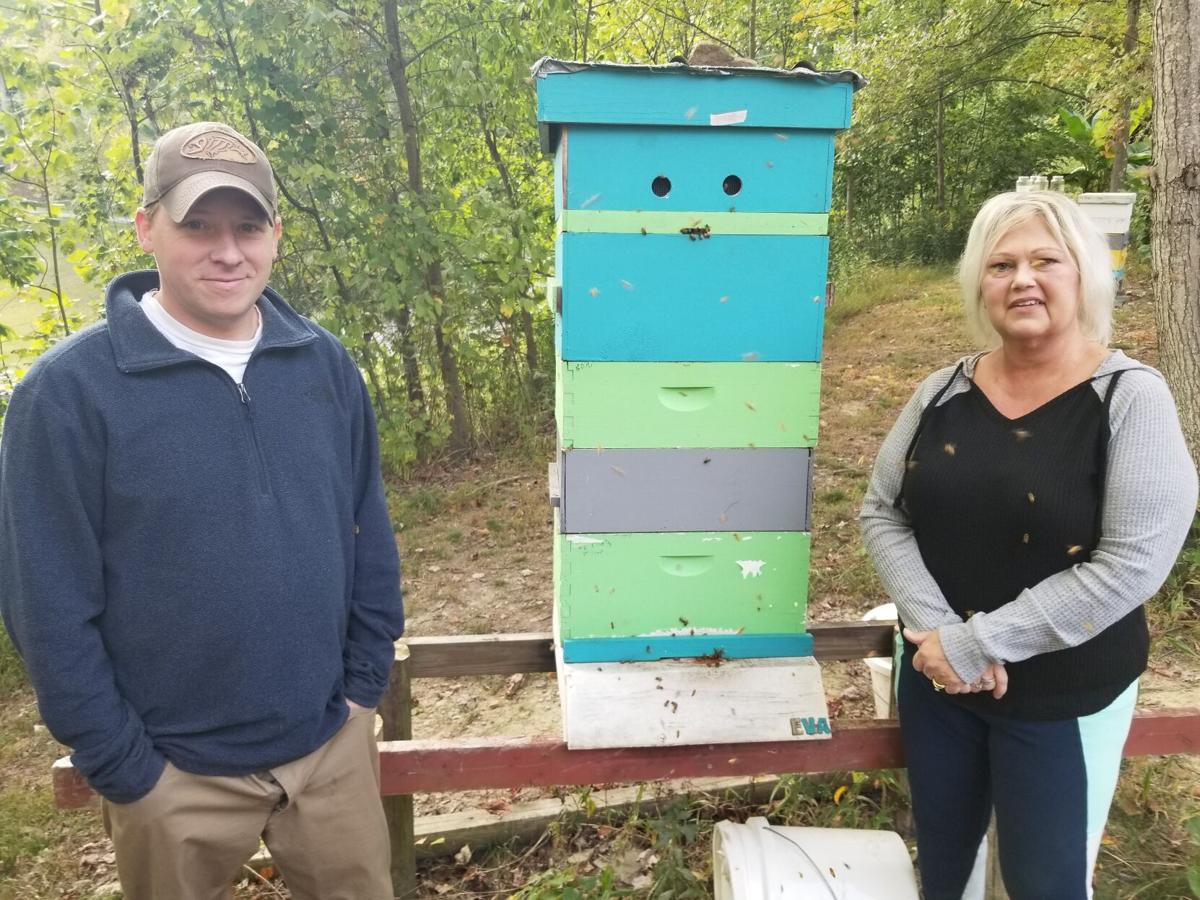 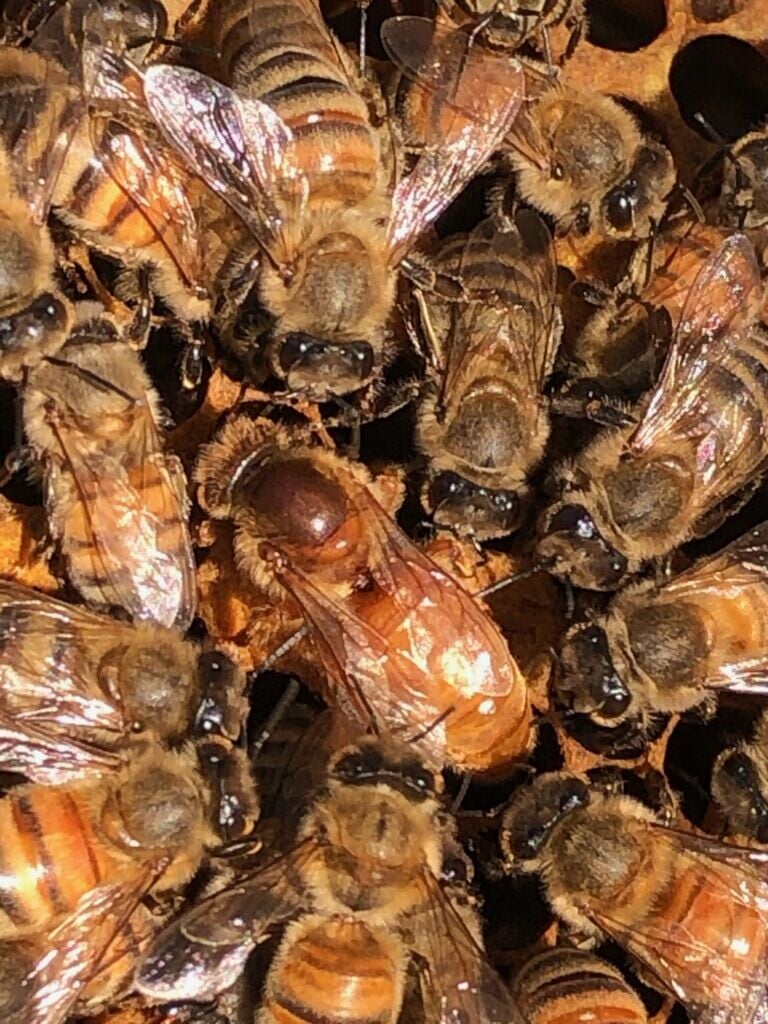 The queen bee, center, is surrounded by worker bees inside on the hives owned by Debbie Martin, West Virginia Beekeeper of the Year for 2020. 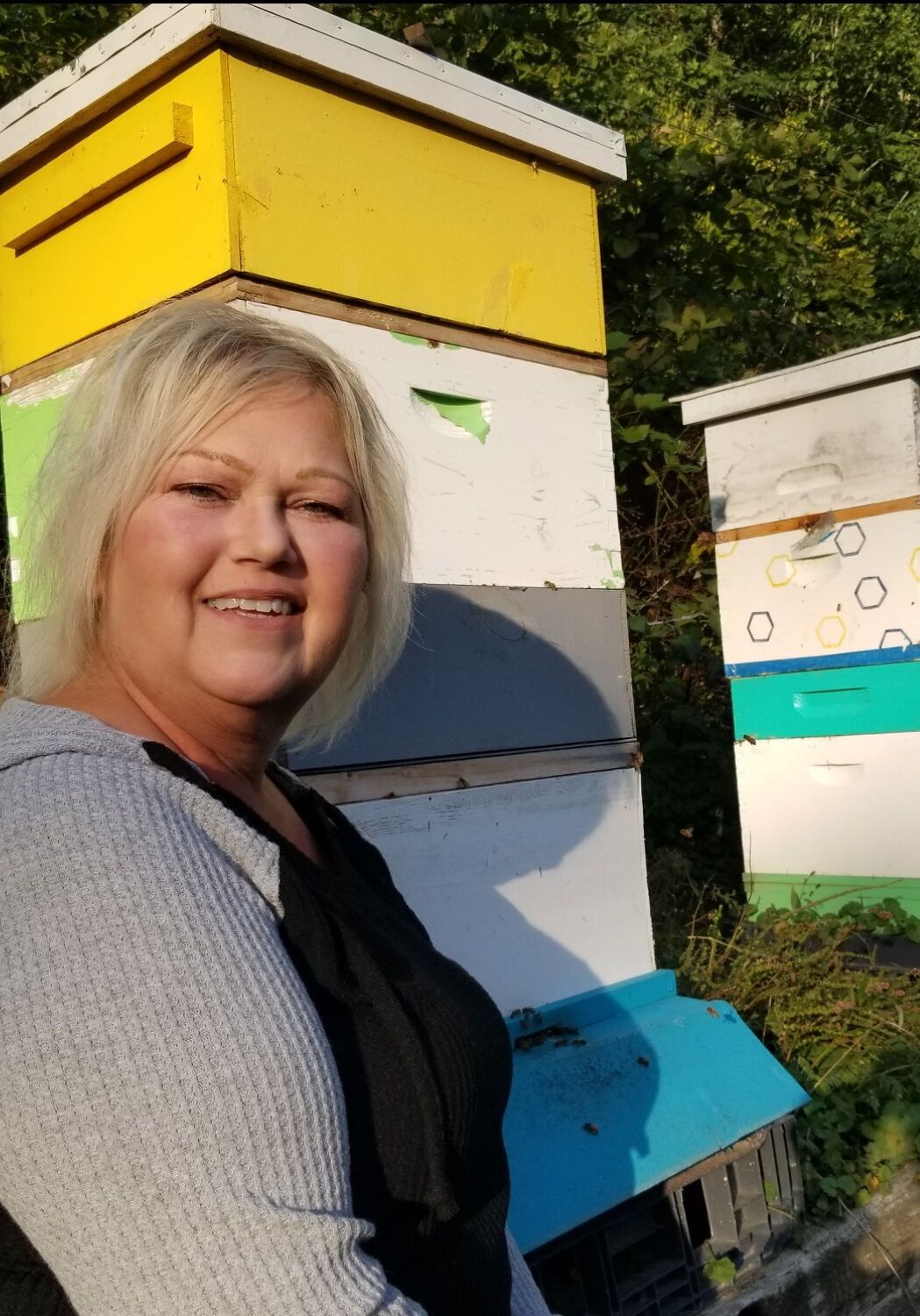 The queen bee, center, is surrounded by worker bees inside on the hives owned by Debbie Martin, West Virginia Beekeeper of the Year for 2020.

BUNNER RIDGE — Eleven years ago, Debbie Martin became interested in beekeeping when her son discovered a swarm of honeybees he was convinced would not make it through the then-coming cold weather.

Martin decided to save the swarm and moved it into a makeshift hive she’d constructed in her yard. Today, her apiary on Bunner Ridge features 16 hives and 21 different colonies of honey bees. Martin, whose honey bee advocacy earned her the honor of 2020 Beekeeper of the Year from the West Virginia Beekeepers Association, said part of her fascination with bees stems from their evident self-sufficiency.

“Honeybees are classified as a super organism because they take care of themselves. They create their own system of managing everything, from how many eggs a queen lays every day to how many bees die every day,” she said. “They segregate spaces inside the hive for food — pollen goes here, honey goes here, babies go here. And they do it all themselves. They need nothing from the outside. They manage it all.”

“Think about this: The only hole in the hive box is the tiny entrance, where they go in and out. The box is dark inside. And yet inside those dark boxes, honeybees construct perfect hexagons. Over their years of evolution, bees have figured out that hexagons give them the most space inside that rectangle in order for them to maximize every bit of space,” she said.

An average hive in summertime has one queen bee and up to 60,000 worker bees, said Martin.

Martin also said a worker bee colony works seamlessly together seamlessly for the good of the whole, as opposed to other societies that, well, often don’t.

“Worker bees spend their lives helping one another, even though a bee’s life lasts only about 45 days. Once a worker bee emerges fully adult from her egg after 21 days, she will clean herself, eat a little honey to gain strength, and then she’ll immediately be given duties — tending to the brood that’s younger than her, cleaning house by dragging out dead bees, guarding the hive’s entrance, and lots of other jobs she’ll have to do depending upon her age,” Martin said.

So, what are the male bees, called drones, doing while the females are busy running the colony?

“I always say they’re sitting on the couch with the TV clicker and their feet up,” Martin said. “But actually, the drone’s only purpose is mating. Mating is their only reason for existence.”

Which seems like great work if you can find it. But, alas, there’s a catch.

“Come wintertime, the female worker bees start kicking the male drones out of the hive. The females will drag the males out of the box, kicking and screaming. Or they’ll sting them to death, whatever they have to do,” Martin said.

This, too, is done is for the greater good.

“They do this because the males are big and they eat a lot. The females don’t want them in the box over winter taking away the food they’ve stored up for the workers and the new arrivals,” she said.

Martin said part of her mission as a beekeeper is reminding the public why honeybees are important in the global food chain.

“One of every three bites of food a person take goes back to a bee,” she said. “For example, clover blooms in a pasture. A honey bee fertilizes the clover flower. Because of this fertilization, when the clover goes to seed, its seeds falls off and more clover grows. Then cattle come through the pasture and eat the clover. If there were no bees and just the original clover in the pasture, when the cows ate it, it would simply be gone. But by pollinating all of the clover, the bees make lots more clover — and there’s plenty more clover for the cows to eat. If the cows didn’t have abundant clover — and if the clover didn’t have the bees to pollinate it — we wouldn’t have hamburgers. Everything is tied back to pollination.”

“Bees are very well-balanced within the society they’ve created and it’s fascinating how they work together,” Straka said.

Like Martin, Straka is a member of the Monongalia Beekeepers Association, and he works closely with his colleague selling nucleus colonies to aspiring beekeepers across West Virginia.

According to the West Virginia Department of Agriculture, beekeeping is the fastest-growing agricultural sector in the state today.

For the past seven years, she has taught beginner beekeeping classes to more than 500 individuals and she plays a major role in the state association’s public outreach efforts. A Facebook group she founded for beekeeping newbies now has more than 16,000 worldwide followers.

“Debbie’s greatest contribution to beekeeping has been her passion and commitment to education and continual learning, both within the club and in the community,” said Debbie Mayne, treasurer of the Monongalia Beekeepers Association. “She regularly has invited members to her own apiary or has gone out to members’ apiaries to assist and teach new beekeepers.”