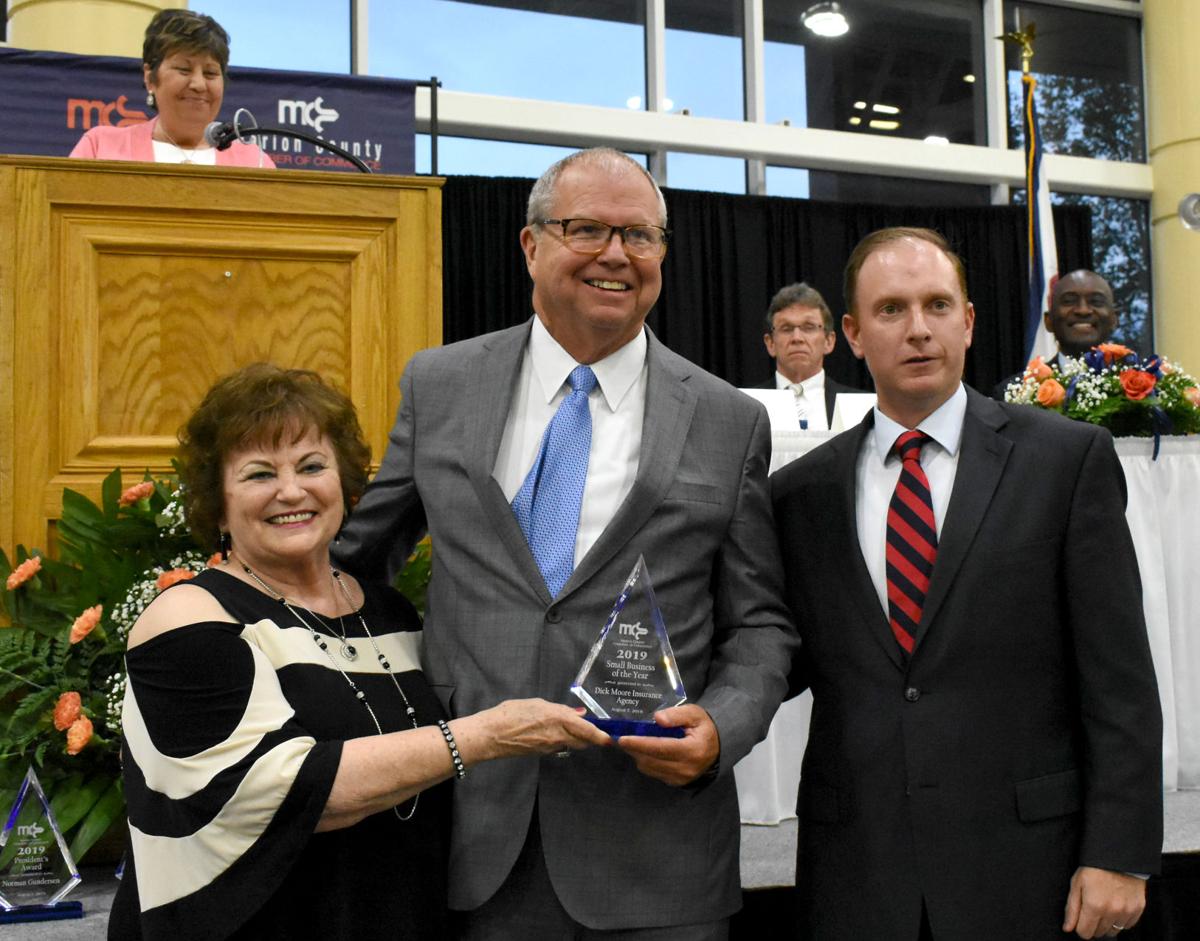 The Small Businesss of the year was awarded was presented to the Dick Moore Agency from left, is Mary Jo Thomas, Dick Moore and J. B. McCuskey, state auditor. 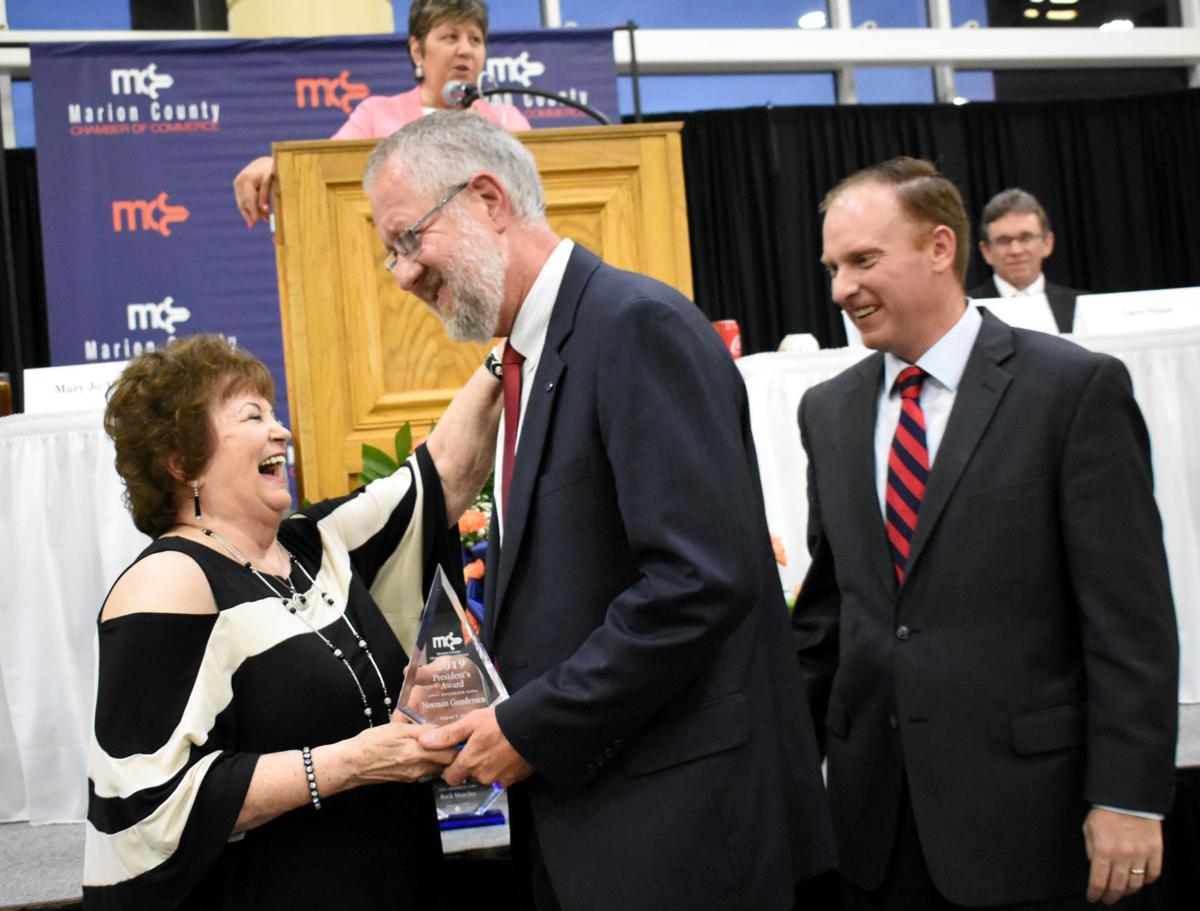 The Small Businesss of the year was awarded was presented to the Dick Moore Agency from left, is Mary Jo Thomas, Dick Moore and J. B. McCuskey, state auditor.

FAIRMONT – Norman Gunderson was intrigued at the individual being described at dinner Wednesday night.

Marion County Chamber of Commerce President Tina Shaw was introducing the winner of the President’s award at the Awards Dinner Wednesday night, which sounded both exciting and familiar to Gunderson.

The connection didn’t click for him until his own name echoed throughout the auditorium at the Falcon Center.

“I didn’t even know who she was talking about until she was two-thirds through it,” said Gunderson, who received the President’s Award from the Chamber of Commerce. “They started talking about working with the handicapped kids and I said ‘Boy, I should talk to this guy, we’ve got things in common.’”

Gunderson was one of seven honorees recognized Wednesday night for their efforts to improve the quality of life in Marion County.

“These are the businesses and community leaders that have truly gone above and beyond over the past year for not only the Chamber, but for all of Marion County,” Shaw said. “Every year, it’s not the same set of awards, they are changed every year. A few are the same every year, but we do have some that change.”

This year’s awards, along with the President’s Award, included the Education Award, Volunteer of the Year, Community Service, Small Business of the Year, Chairman’s Award and the Rev. Squires Lifetime Achievement Award.

According to Shaw, some awards are not granted each year because the Chamber wants to ensure each year’s recipients are truly deserving. Honorees are nominated and selected by the Chamber Board.

“We like to keep it a secret because we want them to be surprised,” Shaw said.

Gunderson was not the only honoree who was surprised by winning an award.

“It’s amazing,” said Dick Moore, who was named Small Business of the Year. “I was shocked, I was very surprised.

“It’s an honor and humbling.”

He talked about having to be a hands-on dad and what it means to live in a state where we have good neighbors who genuinely care.

“I was at home with my kids for five days, my wife is in New York for work, and on Saturday my 2-year-old got strep throat,” McCuskey said. “I had to take my 4-year-old to soccer and then I had to stop by the office, and one of my neighbors cam over and watched my kid. We don’t go to church with the, we don’t go to school with them but it’s my neighbor.

“You find me another place in this country where that’s possible.”

The positive aspects of living in West Virginia are still abound, he said, and the people who remain in the state to work can make a difference by staying in the state.

“My friends are all gone,” McCuskey said. “They’ll send me these little stupid text messages all the time about some bad story that happens in West Virginia and quite frankly they piss me off.”

He said he often turns the text messaging around and asks his friends to come back home and help him change the narrative and make West Virginia better.

“It’s not going to fix itself with you in Raleigh or D.C. or Dallas,” he said. “I’m trying to make this place better and the longer we take crap from people, the longer that’s going to take. It’s time for us to say ‘Hey, West Virginia has got something nobody else has got. This is the place to do it.’”

While the night’s events were able to provide many people with a pleasant surprise, the feelings that emerged from being selected as an award winner will be carried forward in continued service to the community. As Gunderson put it, the service he performs isn’t for himself, but the people that are helped by his work.

“The things they said about me were just so far above what I really do,” Gunderson said. “To say I was surprised is an absolute understatement. It was humbling, embarrassing almost.”

Joseph "Joe" L. Banken, Jr., 69, of Fairmont, died on Sunday, July 5, 2020. He was the son of the late Joseph L. Banken, Sr. and the late Willie Newberry Banken. His surviving relatives are his daughters, Mourine and Jennifer of Evansville, IN, and his sister, Joan Schroering of Fairmont, WV…