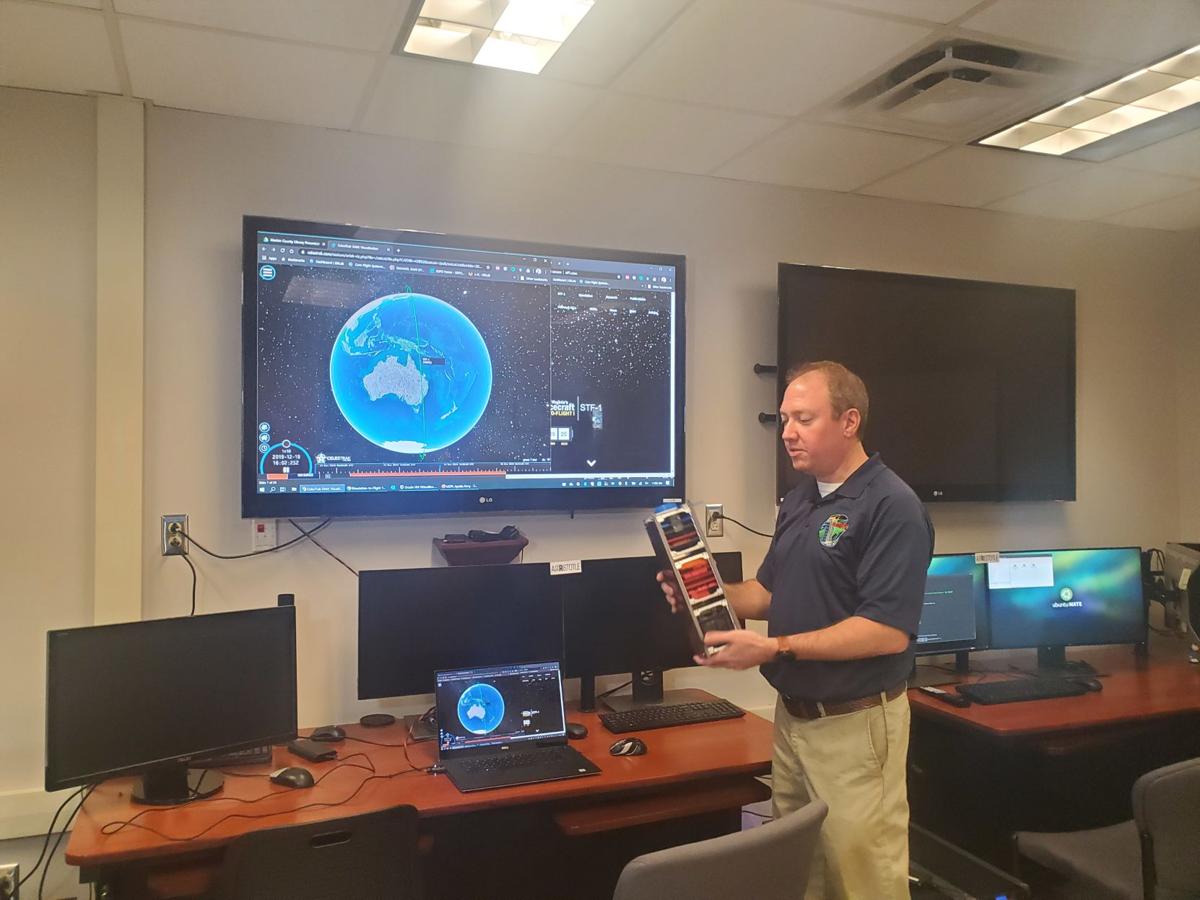 Scott Zemerick, TMC Technologies’ chief engineer and program manager, shows off the model of the STF-1 in the NASA IV&V facility Thursday. 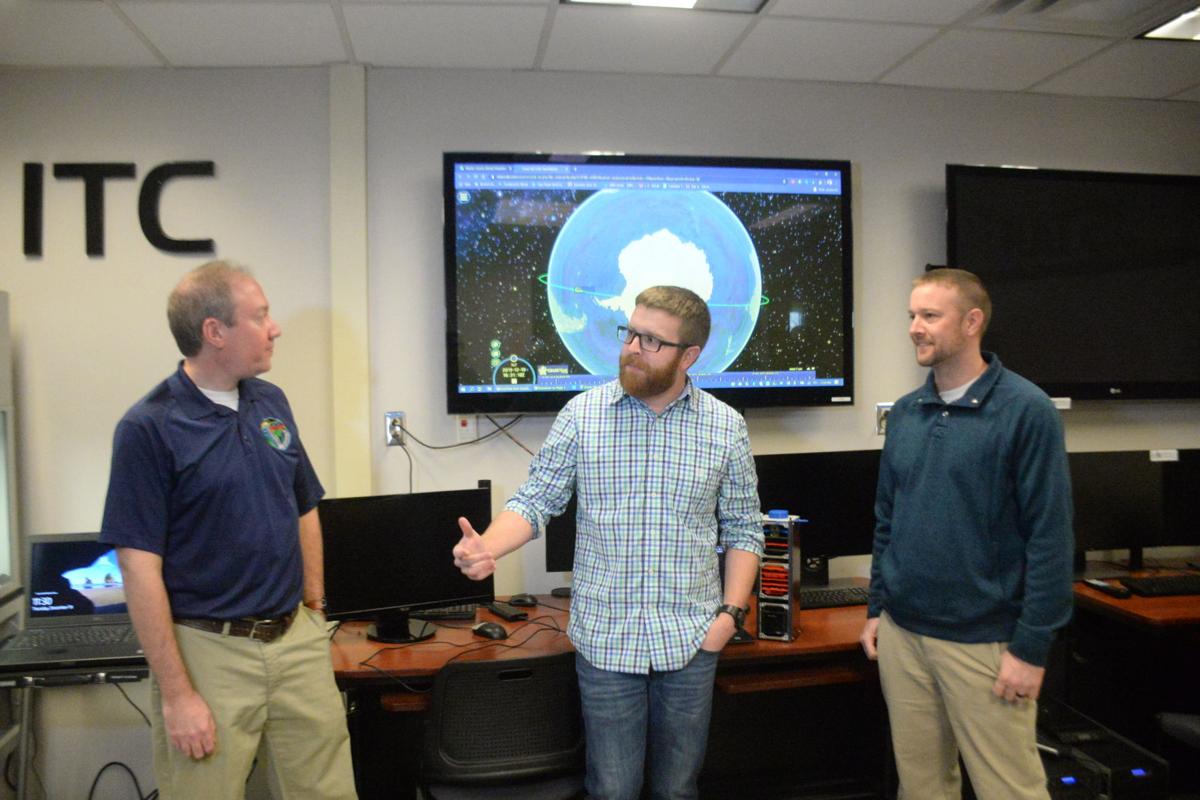 Scott Zemerick, from left, Matt Grubb and Justin Morris of TMC Technologies, explain the programming and construction of the STF-1 at its one-year anniversary in orbit celebration Thursday.

Scott Zemerick, TMC Technologies’ chief engineer and program manager, shows off the model of the STF-1 in the NASA IV&V facility Thursday.

Scott Zemerick, from left, Matt Grubb and Justin Morris of TMC Technologies, explain the programming and construction of the STF-1 at its one-year anniversary in orbit celebration Thursday.

FAIRMONT – The only space craft to ever be constructed in West Virginia – the Simulation to Flight 1 – launched into space just over a year ago.

The unmanned module was only supposed to orbit Earth for about three months, but the pod has remained in orbit where it continually collects data for four different NASA-related experiments.

“We’re very proud to say we have done one year in orbit,” said Scott Zemerick, chief engineer of TMC Technologies and program manager. “We have successfully hit all of our research and scientific goals, so any other additional research we can do, any additional data that we can download is really additional icing on the cake as far as this mission goes.

Engineers at TMC Technologies built and programmed the pod, and sent it away to be launched into space.

For the engineers, this accomplishment is not only groundbreaking, but exciting, especially after the craft earned national recognition for its programming.

“We were runner-up for NASA’s software of the year award,” said Matt Grubb, STF-1 lead engineer. “We’re really proud to say that software is now proven in space, we can use it to work on our STF-2, our next mission, as well.”

Grubb said the construction and programming of the module required years of planning to meet the needs of the mission. In order to ensure the craft would operate at the necessary level, engineers used a simulation program to map out the trajectory of the program, hence the name Simulation to Flight.

“We didn’t expect it to live this long. Our initial mission was three months, that’s the typical lifetime of these cube sets. At the end of three months everything looked stellar,” Grubb said. “Now we’re up to a year, and the scientists continue to ask for data, because the more data they get, the more they can expand their research.”

Grubb also said the importance of the simulation could not be understated, because the average failure rate for crafts like STF-1 hover around 41 percent, so tests were imperative.

“There’s a pretty high failure rate,” Grubb said. “This being the first one West Virginia has had, we didn’t want to take that option. We had a zero percent chance of failure, 100 percent chance of success and the simulator led to that.”

According to Grubb, STF-1 uses a relatively cheap processor, one that may be used in an device as small as a toaster, which is also about the size of the craft. The project as a whole cost just under $1 million, which is relatively cheap for an initiative of this kind and length.

“Overall budget cost was about $900,000,” said Justin Morris, principal investigator for NASA. “Your materials, you’re probably talking about $200,000. It was actually a very bottom-up approach, a lot of organizations, universities provided funding for this project.

“We believe one of the lowest cost small sets in NASA.”

Engineers can track the location of the STF-1 module in real time, and view its trajectory around the earth via the web at  stf1.com. The engineers in West Virginia communicate with STF-1 when it passes over the region, and they also attached a camera to the craft, which became one of the creators’ favorite aspects.

Grubb said now that the capsule is in operation, other organizations can download the software the engineers used for programming and further extend the influence of the project.

“We’re working with universities and other government agencies across the country to put this into place,” Grubb said. “It’s open source so anyone can go online and get it... So that has driven people from other countries, Japan ... and I think we have University of Israel is using it.”

To have this kind of impact on NASA and its data collection capabilities is an achievement for the craft’s programmers and engineers. However, many at TMC are simply proud it was created in West Virginia.

Grubb said the team is planning its next mission with the goal of making STF-2 as equally successful.

“This one proved that some of our technologies we could fit in orbit and be successful flying them on a real space craft,” Zemerick said. “Now we’re going to think about ways we can apply this to a second cube set in orbit, or STF-2.”

John Richard Spadafore,86, passed away Saturday, February 22,2020. Full arrangements will be published Thursday, February 27,2020 and are under the care of Domico Funeral Home in Fairmont.

Daniel Allen Keener, 69, of Salem, West Virginia died Wednesday, February 19, 2020 in the Genesis Salem Center, Salem, WV. He was born February 12, 1951 in Fairmont, WV a son of the late Howard M. Keener and Novella I. Shaver Keener. Mr. Keener is survived by four brothers and their spouses …

Helen "Pete" Haught formerly of Fairview passed away February 20th at Madison Center in Morgantown where she had been a resident for several years. She was born in Fairview on September 5, 1925. She was preceded in death by her husband, Gordon. She is survived by a brother, Robert Hunter of …