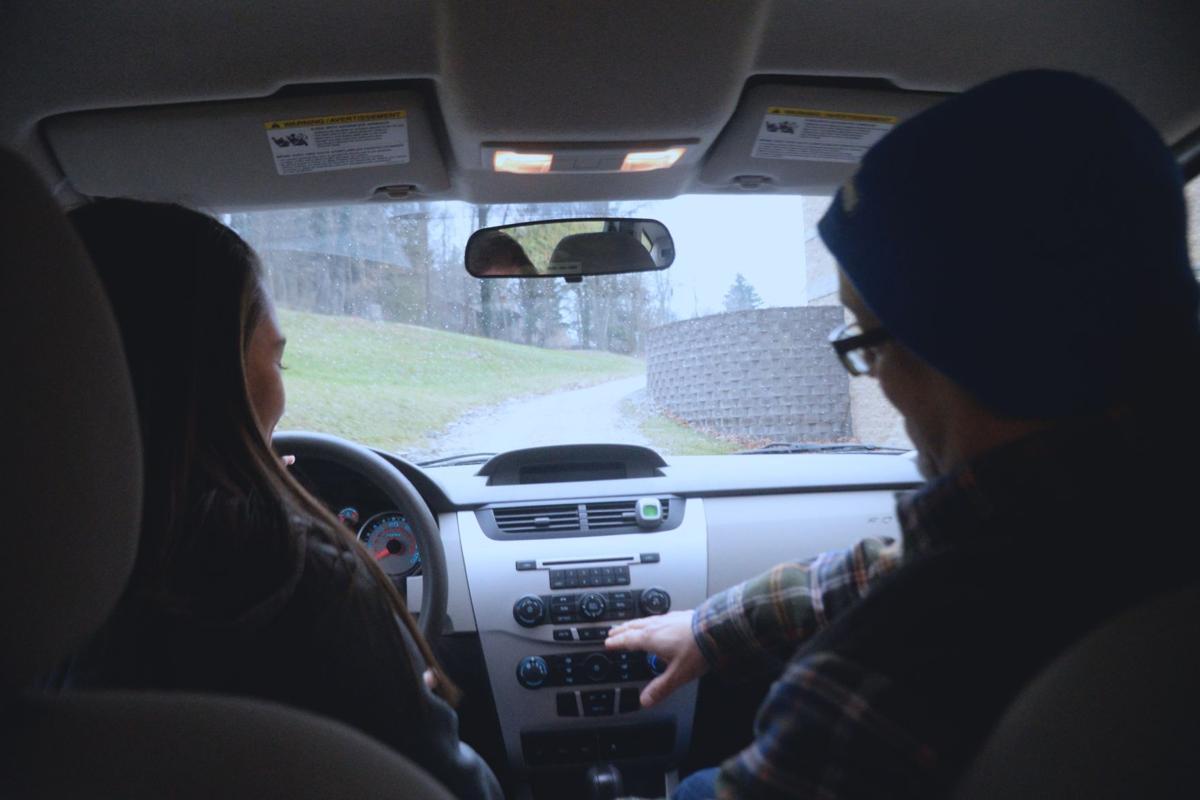 Fairmont Senior junior Leah Shaw, left, gets instruction from driver’s education instructor Bob Costelac, preparing to get the education vehicle on the road for a lesson. 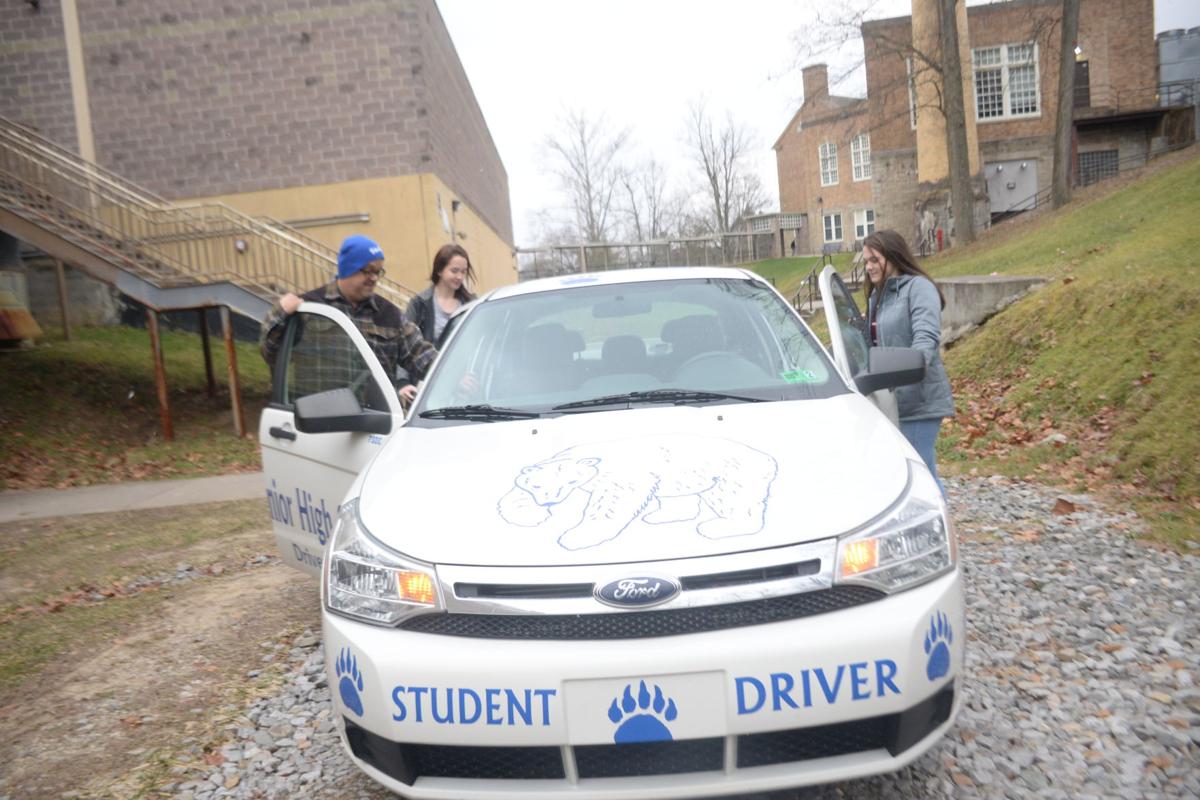 Bob Costelac, left, gets into the instruction vehicle at Fairmont Senior with student drivers Leah Shaw, right, and Ariana Asbury for a workshop lesson.

Fairmont Senior junior Leah Shaw, left, gets instruction from driver’s education instructor Bob Costelac, preparing to get the education vehicle on the road for a lesson.

Bob Costelac, left, gets into the instruction vehicle at Fairmont Senior with student drivers Leah Shaw, right, and Ariana Asbury for a workshop lesson.

FAIRMONT – According to the West Virginia Division of Motor Vehicles, police made 167 arrests for underage drinking and driving in the 2018 fiscal year.

That number is down from 2017, when police made 604 arrests for the same charges. According to Chris Freeman, driver’s education instructor at North Marion High School, part of his course focuses of drinking and driving, and the dangers that the crime presents to all drivers on the road.

“You look at what’s killing teens, the No.1 killer is driving an automobile,” Freeman said. “I have a unit on drinking and driving, we bring the simulator in, we do a mock accident, that’s all to teach them about the dangers.”

While this is a lesson in his and Fairmont Senior High School’s driver’s ed classes, many teens taking their first touch on the gas pedal won’t be learning this lesson from teachers, or any other lessons of their classes. According to Freeman, there aren’t as many driver’s education courses in the state or even in Marion County as there used to be. That means teens won’t get the full range of lessons provided through these classes.

“I’m overbooked every year,” Freeman said of the enrollment in his class. “A study I read about is in Ohio, they took driver’s ed out of schools, and the accidents increased significantly for the ages of 16 to 18-year-olds. It’s a class I wish all teenagers could take, I guess if we had more teachers, we would be able to do that.”

“There is a shortage of electives, but you have to offer it as long as you have somebody to teach it,” said Bob Costelac, driver’s education instructor at Fairmont Senior. “I take 96 students a year and I’m always maxed out.”

Both Costelac and Freeman said the absence of these courses in high schools is a detriment to students both with and without their licenses, because they will be driving mainly in the areas surrounding their schools.

“The students get to use the skills as soon as you teach them, and they use them for the rest of their lives,” Costelac said. “One of my goals is for my students to get their permit by the end of the semester, and if they have their permit, go to the license stage.”

One possible reason for the decline, at least in Marion County, is the lack of resources for getting certified to teach driver’s education, Costelac had to take classes at Shepherd University for his certification, while Freeman had to go out of the state, to Nebraska, to complete his training.

“I went to Hundred High School, and I didn’t have my driver’s ed degree,” Freeman said. “West Virginia used to have a safety degree, which counted, they didn’t have any anymore. There were two places I found; California, Pennsylvania, you had to drive up there every Tuesday night, and the other one I found was the University of Kearney, Nebraska. It was all on DVDs they sent to you.

“I got on a plane, flew to Kearney, Nebraska, took a class out there, and everything transferred to West Virginia.”

Andro Barnett is a driver’s education educator at Shepherd University, and said he believes the school is the only one in West Virginia that can certify a teacher in driver’s education. The university previously had the certification, but reworked the degree to accommodate those who want or need to earn it quickly.

“The state wanted to come up with a curriculum to help teachers become certified in driver’s ed,” said Barnett, professor in the School of Recreation, Sport and Exercise Sciences at Shepherd University. “So we went back and revamped the driver’s ed course to make it a certification for teachers in West Virginia to be certified.”

Costelac said he believes more people will be trying to be certified to teach driver’s education because more people want the insurance discount that often comes alongside taking the course. He said parents with teen drivers often see their premiums go up, so having their teen driver take the course could lower that cost.

“Most of the insurance companies offer a discount, and insurance is going up,” Costelac said. “If there’s more accidents, they raise everybody’s premiums, so people are in the business of making money, so I think you’re going to see an increase in the courses.”

The courses taught at the individual schools utilize book learning, class lessons and demonstrations and hands-on driving workshops. To pass the course, Freeman said the students have to get three hours of experience behind the wheel if they have their license, and six if they have their learner’s permit.

“The kids go in groups of three and go out and drive for 45 to 50 minutes a day, and obviously I’m with them,” Freeman said. “We start with the introduction to the car, the brakes, the mirrors, seatbelts. We look under the hood, go over the major things, how to change a tire. Then we let them drive around the parking lot the first day to see where they’re at.”

Barnett said that the courses offered at Shepherd are built around educating a teacher to be able to teach students how to drive in a safe and formal manner.

“The goal of a driver’s ed program is to provide teachers with the knowledge and the skills to safely operate so they can show students how to operate a motor vehicle,” Barnett said. “There’s a very intensive online class, and they have to do 24 hours in a vehicle with a certified driver.”

Some Marion County students currently enrolled in driver’s education said they have enjoyed the course, and that their teachers have helped them become better drivers.

“I just got my driver’s license in August,” said Leah Shaw, a junior at Fairmont Senior. “I feel like you learn how to handle situations that you don’t learn from your parents teaching you.”

Others need driver’s education just to get their learner’s permit, because they need to pass an initial test just to be allowed to start learning to drive.

“I just recently got my permit and it was because of the help of this class,” said Ariana Asbury, a junior at Fairmont Senior who has her learner’s permit.

Freeman said that the change in a student driver’s confidence as the course goes on is exponential, and he believes it helps them become better drivers.

“It’s amazing how much progress they make in a semester,” Freeman said. “From when they’re nervous about going around the parking lot and they can’t drive there, to driving to the speed limit and how to control the vehicle.”

“If we don’t have driver’s ed courses, my prediction is you will see a lot more accidents on the major highways and such,” he said. “This is a very serious problem that we’re having that we don’t have these certified teachers teaching driver’s ed to high school students. If they don’t take these courses in high schools, these accidents are happening.”

Freeman, too, believes the course is invaluable to students, because of the dangers they face just driving a car in everyday life.

“This is supposed to be a fun class, it’s an elective, but it’s also maybe the most important class you’ll have,” Freeman said. “I’ve never known anybody who missed a math question and died from it, but if you mess up out there on the roadway with a 3,500 pound vehicle going 55 miles per hour, you’re going to hurt yourself or someone else.”