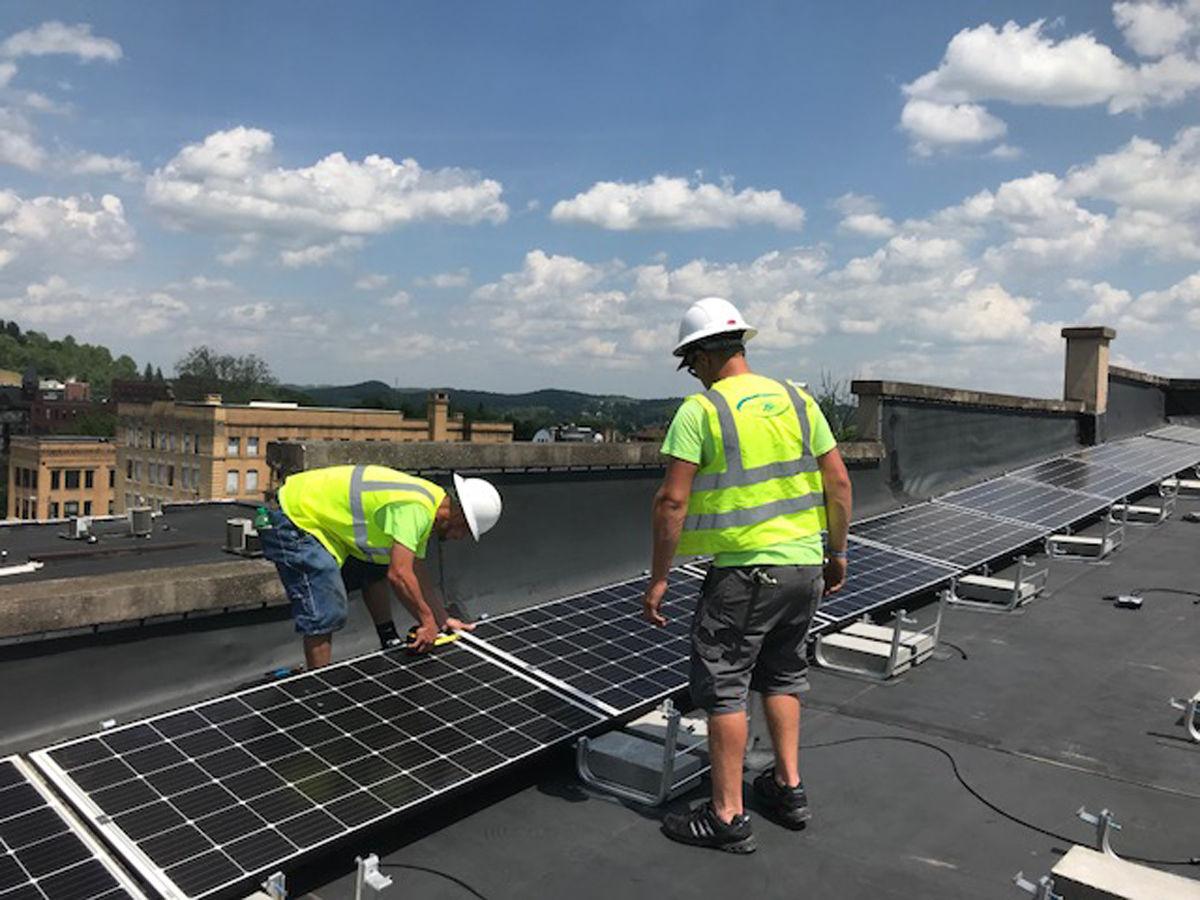 Robert Thompson, left, and Brandon Widdows, with MTVSolar of Berkeley Springs, install solar panels on the roof of AllPro Home Improvement in Fairmont. 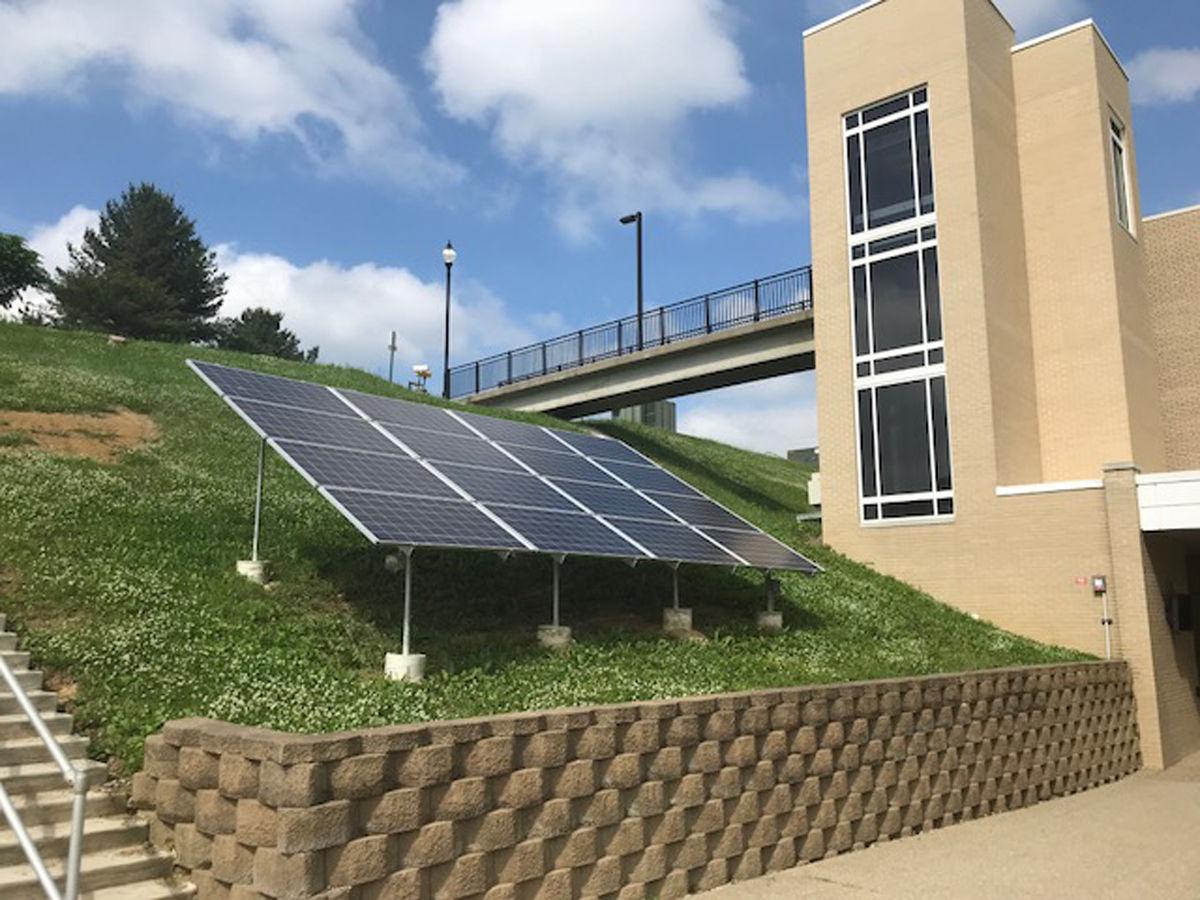 Fairmont State University has embraced solar energy with this ground mount by the library.

Robert Thompson, left, and Brandon Widdows, with MTVSolar of Berkeley Springs, install solar panels on the roof of AllPro Home Improvement in Fairmont.

Fairmont State University has embraced solar energy with this ground mount by the library.

FAIRMONT — Cliff Jackson has been interested in solar energy since he was in elementary school.

He read about the topic in the “Weekly Reader” publication back in the 1970’s.

“It just fascinated me,” he recalled.

Now, he has realized his lifelong dream of installing a solar energy array.

Approximately 60 solar panels were put in place on the rooftop of his business, AllPro Home Improvement, on Fairmont Avenue in Fairmont.

“AllPro Home Improvement is going green,” reads a message on AllPro’s Facebook page about the project.

The installation of the solar panels at AllPro is part of a growing trend toward solar energy in West Virginia.

Since 2011, West Virginia’s installed solar PV capacity (photovoltaic solar used to generate electricity) has increased six-fold, from 0.75 MW (megawatts) to 4.4 MW at the end of 2016, according to research commissioned by the West Virginia Office of Energy from Marshall University’s Center for Business and Economic Research.

Jackson expects to save $2,500 to $3,000 a year at his business with his solar array and offset 96 percent of his business’ annual electric usage.

He will use the solar energy captured in his 18 kilowatt solar array for the manufacturing of the awnings that his business installs, as well as for general business office purposes.

Because of federal incentives for solar energy, he expects his solar array to be paid off in two years.

The government allowed him to fully depreciate his solar array on his taxes in one year, and he received a 30 percent tax credit as a result of the federal incentives.

He also received a REAP (Rural America for Energy) grant through the USDA to cover 25 percent of the installation cost.

The total cost of his solar array, including installation, was approximately $56,000.

Jackson is excited about the use of solar energy, saying he wants to decrease the carbon footprint.

“I think it is a very important part of our energy future,” he said.

“The great thing about solar is once it’s installed, it’s going to continue to produce, with very little maintenance for decades and decades,” he added.

He noted that his solar array is expected to have a long life. He estimated that it will still operate at more than 90 percent efficiency in 50 years. He based his estimate on data about the longevity of solar arrays, going back to the 1970’s.

Jackson said people who have been curious about his solar array have stopped by his business to check it out.

“Most of them are very supportive,” he said.

According to Jackson, the Marion County Technical Center senior and junior electrical classes visited while the installation of the solar array took place. They were able to see how a solar array is put in place and provided some assistance with the installation.

For Jackson, the irony that his solar energy array sits atop a building that was built in the 1880’s and has used gas and electric as energy sources over the years is not lost.

“This old technology is meeting the new,” he said.

Jackson expects to be able to start using his solar array in the next week or two, once all inspections are done.

Michael P. McKechnie, president of Mountain View Solar, commented on how solar energy is growing in the Mountain State.

“West Virginia has plenty of sunshine and solar energy to be captured,” he said. “There are already hundreds of residential systems and 40-plus commercial systems installed and operational in West Virginia. The interest and need for solar energy systems is growing rapidly. To meet this demand, we are seeing more and more solar companies open business in West Virginia. As the largest solar PV company in West Virginia, MTVSolar has installed over 70 percent of all the solar in the Mountain State. In Morgan County, West Virginia alone, we have 56 solar installations, making our home county the highest solar density per capital county in the state, maybe in the mid-Atlantic region.”

He noted the benefits of solar energy.

“Utility bills are an expense for all Americans,” he said. “Installing solar is a way to take that expense and turn it into an asset. Solar is an investment that pays a high return and can help with energy independence. Plain and simple, solar is the fastest-growing energy source in our country, and the world, it just makes sense.”

“MTVSolar would like to thank Cliff Jackson and AllPro (Home Improvement) for leading the way in Fairmont and West Virginia. With this sound investment and all the financial incentives, and financing programs,  AllPro will be able to reduce their expenses and continue to grow and serve their community.”

“West Virginia has been an energy state for nearly two centuries. That legacy can continue in a 21st-century energy economy if our state embraces the potential of solar to create a smarter, more efficient, equitable, resilient and democratic energy system. Hundreds of thousands of Americans already work in the solar industry, and solar is the fastest growing source of power in the country. West Virginia families, businesses, and communities deserve to save money and take control over where their energy comes from. Solar allows us to do that, and will provide good local jobs for West Virginia workers for decades to come.”

There is a rooftop mount on the roof of the library and a ground mount by the library.

Information from the university shows the ground mount produced 278 kilowatt hours in May. It was installed on July 29, 2016.