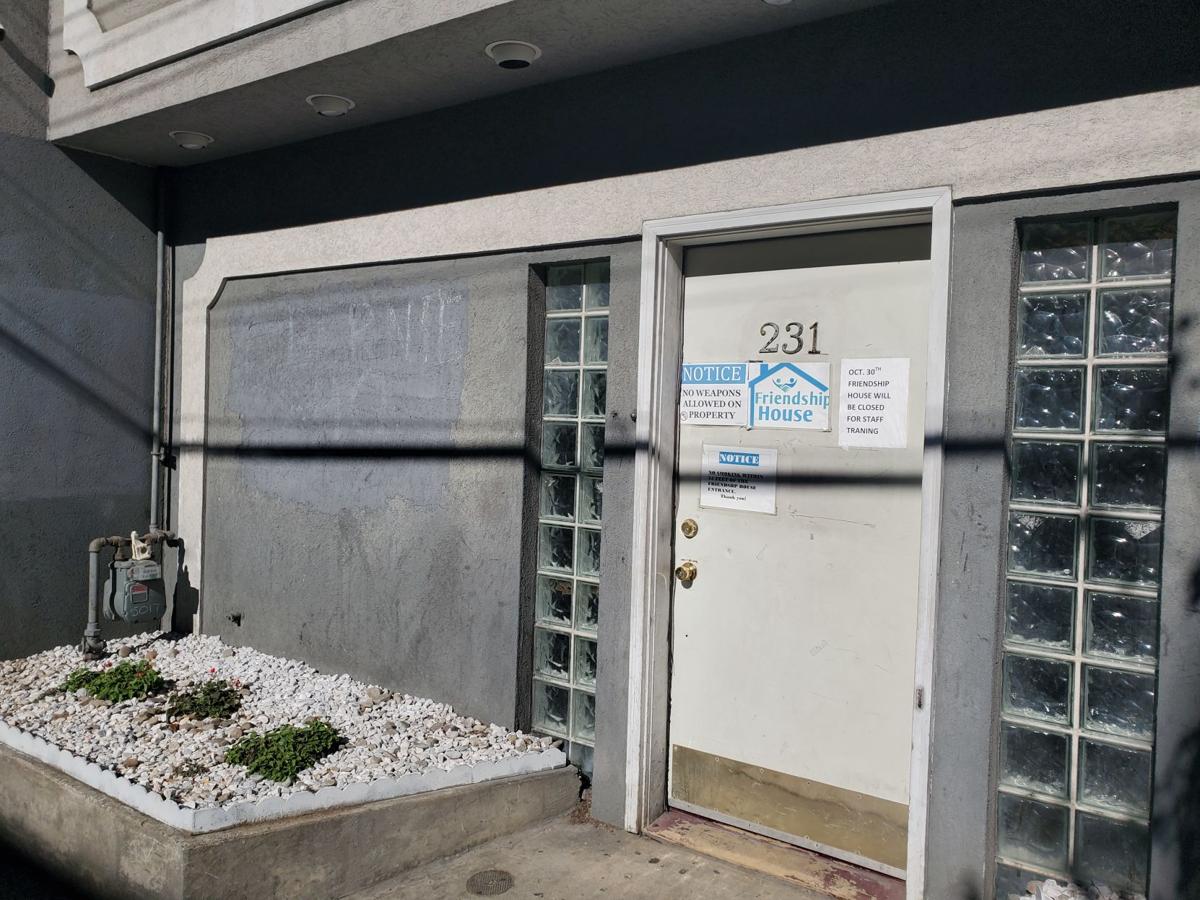 The Friendship House has an entrance on Spruce Street, alongside the other organizations and businesses in downtown Morgantown. 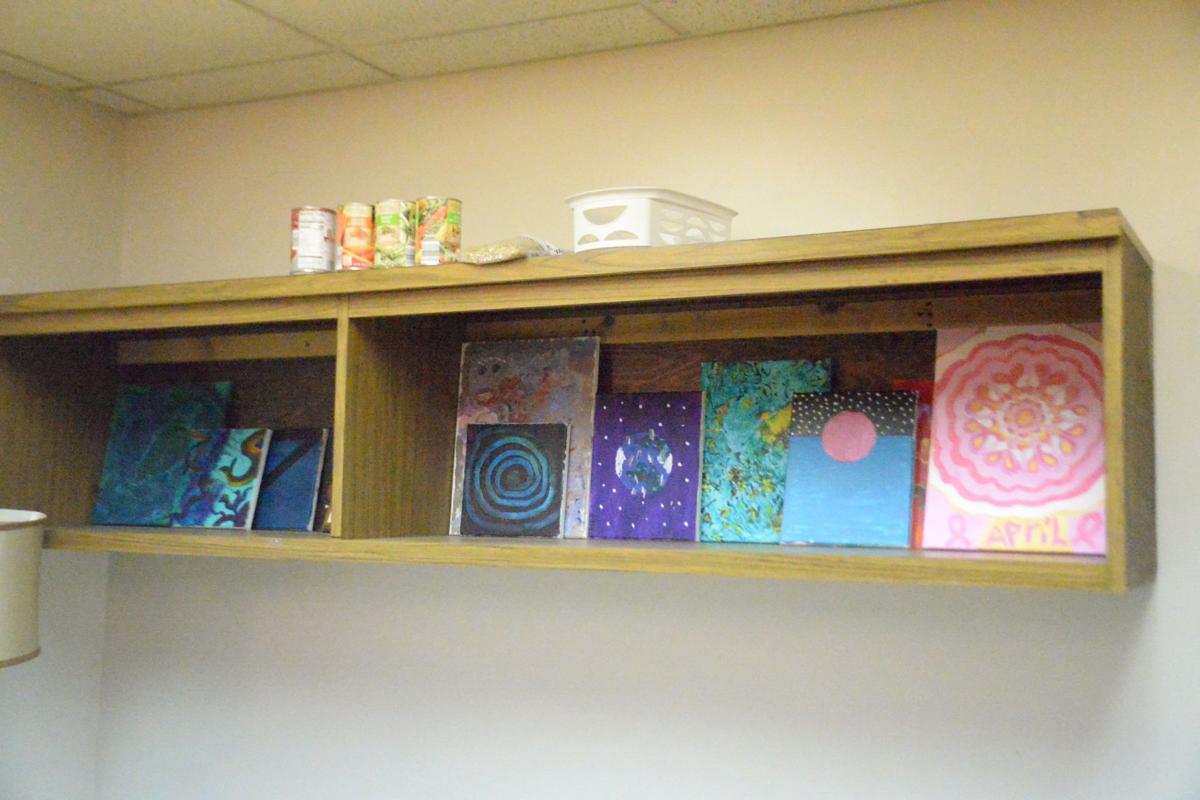 Painting plays a role in the therapy and recovery of those who frequent the Friendship House in Morgantown.

The Friendship House has an entrance on Spruce Street, alongside the other organizations and businesses in downtown Morgantown.

Painting plays a role in the therapy and recovery of those who frequent the Friendship House in Morgantown.

Rather than sit in sadness over the memory, Power headed to his regular hangout spot, the Friendship House, where he has been going almost daily for four years.

“It’s a hard thing to deal with, I was really close with him,” said Power, who is 24. “Any other time I’ve ever known was, ‘Well, I don’t know how to deal with this so I’m going to get high.’ That’s not the case for me anymore.”

Power is currently working toward an assistant manager position at Fat Angelo’s Pizzeria and is a bouncer at a bar called the Bank. He said all this would not be possible without the help of the people, staff and friends at the peer recovery center called Morgantown Friendship House.

He credits the center that is operated and funded by Milan Puskar Health Right as the reason he can maintain sobriety.

“I woke up and the first place I came was right here,” Power said. “If this place wasn’t here, personally, I know for a fact I would still be on the street getting high.”

Power is one of approximately 60-80 individuals who visit the Friendship House on a near-daily basis. They go in search of solace from the outdoors during the day, as well as support and counsel.

“Homeless people need to sleep, they need to eat, they need to be safe,” said Jacob Eye, a recovery coach at Friendship House. “When they’re not, they’re just causing more problems than good.”

Milan Puskar Health Right took over operations of Friendship Morgantown about three years ago and moved into its current location on Spruce Street a little more than a year ago. Caitlin Sussman, Friendship House program director, said the house is open 312 days a year, serves between 1,000-2,000 people a month. In 2018, it served about 19,830 people.

Along with peer counseling, the Friendship House uses music, writing and art support groups to help those dealing with substance use disorder and homelessness. Clients also can get job referrals from employers and volunteer to maintain a community garden.

While the Friendship Room was founded in 1964, Health Right has added the counseling and peer recovery services.

“People need community in general; they need to belong,” Jones said. “The other thing is that we want people to also be part of the larger community, and we have the opportunity to help make those things happen.”

Seeing a need for an expansion of services, Health Right has been working to implement a similar Friendship Room in Fairmont. Work is underway to move into space on the fourth floor of the Marion County Courthouse Annex since this fall.

“We have a projected opening date for this fall, once we get our volunteers trained,” said Rochelle Satterfield, who will serve as the program director for Fairmont’s Friendship Room. “We will have an open house in the upcoming months for the peers to get involved with the community and be excited about showing what they’ve accomplished.”

Since being approved by the Marion County Commission to use the space, Satterfield has been developing a cadre of volunteers and counselors, who will are required to complete 500 hours of training before offering the first piece of advice to others.

The location of the Fairmont center will be similar to that of the Morgantown Friendship House – near the city center where other services are also located.

According to Satterfield, the room will also provide limited food and drink to those who enter, and supplies necessary for artistic expression including painting, making music and writing.

Since its announcement, Fairmont’s Friendship Room has been met with differing opinions from government officials, business owners in downtown Fairmont. Mayor Brad Merrifield said the city council favors having a place to help those in need of recovery, but it is the location of the room that is troubling to some members.

“We just feel it is a less desirable location,” Merrifield said. “The council as a whole supports the concept, it’s just the location that we have a problem with.”

Friendship Fairmont will be housed in the same county building that houses the court system’s Day Report Center, which already gets criticized for leading to a group of people who seem to loiter around the downtown area.

“We are pretty much in favor of a trial period in putting it downtown,” said Randy Elliott, president of the Marion County Commission. “We’re also very aware of the complaints and the issues facing the business people that have concerns; it seemed that (foot traffic) would be comparable to what we already have down there.”

Elliott said, at this point, the commission has not signed a lease with Health Right for the space. However, they will likely decide after a 90-day trial period whether or not to continue housing the Friendship Room in the county building.

According to Jones, controversy has followed the Friendship House since it began, and especially during its recent move to Spruce Street in downtown Morgantown. She said people say that the house brings individuals to the downtown area, and their presence will damage the business climate in the city.

“The problem downtown isn’t just people coming to Friendship House,” Jones said. “There are economic issues that are related to why there are businesses that aren’t doing well.”

Sussman has advocated on behalf of Friendship House to the Morgantown City Council. She said its members, too, were skeptical about the lingering effects of the Friendship House.

“There’s been a number of business owners on our street who have expressed concern,” Sussman said. “I think they feel like they want to make their business good downtown, but they also understand that service provision is also important; they’re kind of stuck in the middle.”

Jones sees the loitering controversy as something the Friendship Room will help alleviate because people can go inside rather than stay outdoors.

“That’s part of the argument, that the folks in downtown Fairmont don’t want our people to be where they’re at,” Jones said. “Even though they are already there.”

Officials at Health Right agree that no recovery program is perfect. Jones said there have been occasions where authorities had to be called to a situation at Friendship House.

“We’ve done really well; we haven’t had to call the law in months,” Eye said. “Any public place that has a traffic of people, there is going to be ambulance calls, etc. We’re dealing with a tougher population.”

Satterfield also said Friendship Fairmont won’t tolerate illegal activity of any kind and people will have to leave when the room closes each day.

“This isn’t going to be a drop-in center without rules,” Satterfield said. “We’re going to have groups and those who can’t follow the rules won’t be welcome there.”

However, staff members in Morgantown said the guests who visit regularly are the ones most dedicated to following the rules and forming connections and friendships with people who are trying to better themselves. Jacob Eye said the connections he has made in Morgantown are legitimate.

“We’ve seen a lot of people come through here and get a job, get a place and then don’t come around anymore other than to visit,” Eye said. “If not, some people, they just need food and shelter and a place to have community and engage.”

A day at the Friendship House is filled with variety. Some people sleep on couches available in different rooms of the two-story structure, while others watch TV, some read and a woman can be seen simply brewing a pot of coffee. Walking around the shelter, Eye greeted regular visitors with high fives, hugs and questions about their day, to which he received affectionate smiles.

While they are all there for different reasons, their activity while indoors keeps them occupied and productive through creating art or speaking with counselors about housing or job searches. Most just want a place to be safe and off the street.

“We want people to feel safe enough to where they can come here and sleep,” Eye said. “A lot of businesses, they don’t want somebody just loitering – come loiter here.

“If you want to stay out of trouble and have somewhere to chill because you’re homeless, this is the spot.”

Despite any controversy that surrounds the room, Power sees a different story. Power sees a community of damaged people coming together in a safe, friendly environment, specifically for the company of that community. To Power, the Friendship House is extremely positive.

Even though the concept of a Friendship Room will be new to Fairmont, Eye said he thinks the center will bring about positive change.

“If you want to help the community, then you want those people to have a safe place,” Eye said. “They don’t just disappear, they’ve got to have somewhere. That’s what we want to be here for them, just supplying for a need.”

Acknowledging the controversy, Power said he believes Fairmont at large will benefit from the Friendship Room.

“These people, they genuinely love and care for the people they work with,” Power said. “Yeah, shit’s not always perfect, but at the same time, nothing is ever going to go 100 percent to the tee.”