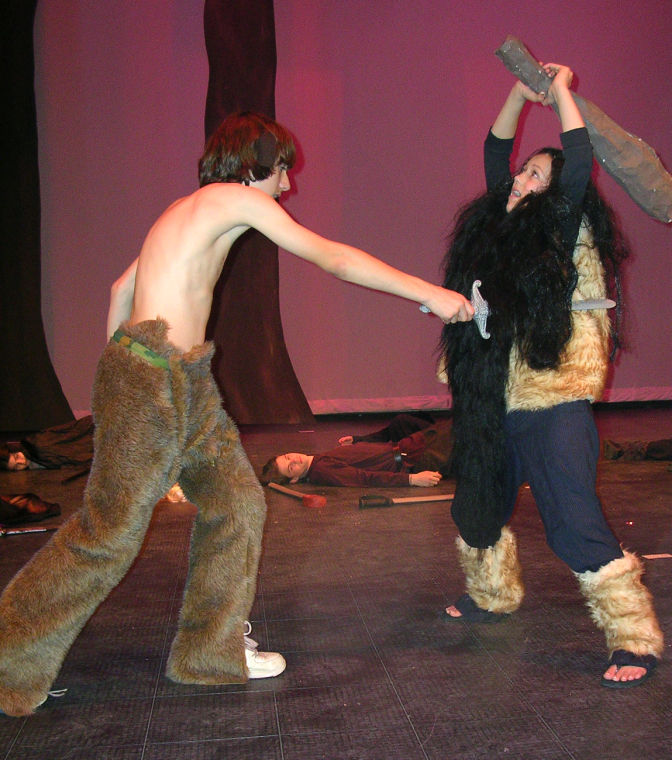 In a fight scene from the play, Corey Rexroad (left) and Sarah Hefner battle it out around the slain. 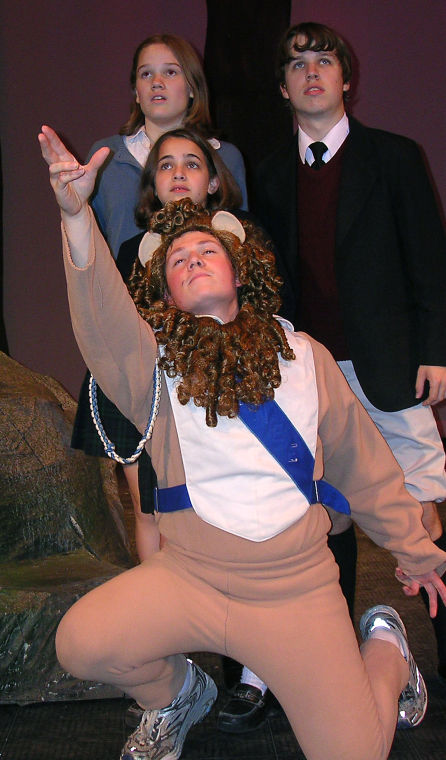 Jake Brady (top), as Aslan, stands before the children who enter the magical world of Narnia in a scene from “The Lion, The Witch and The Wardrobe” presented by the Morgantown Theatre Company.

In a fight scene from the play, Corey Rexroad (left) and Sarah Hefner battle it out around the slain.

Jake Brady (top), as Aslan, stands before the children who enter the magical world of Narnia in a scene from “The Lion, The Witch and The Wardrobe” presented by the Morgantown Theatre Company.

“Narnia” goes from big screen to a local theater as Morgantown Theatre Company takes on C.S. Lewis’ “The Lion, The Witch, and The Wardrobe” this weekend. The school-age actors have gone to different lengths to learn to play the classic characters, including background research and even being coached in their English accents. Hillary Phillips, MTC artistic director and executive director for the nonprofit organization, is hoping the success of the big screen adaptation will translate into ticket sales for the Friday-Sunday performances at the Metropolitan Theatre in Morgantown. “I’ve always enjoyed the story, and I did ‘Narnia’ a year ago, so when the movie came out, it seemed like an opportune time to bring that back,” she said. “So hopefully, the people are on the ‘Narnia’ craze right now and really interested in it.” The story is about children growing up in Britain during WWII who move to live with their uncle in the country. One day the children stumble across the land of Narnia after playing hide and seek in an enchanted wardrobe. The tale of good triumphing over evil, which touches children and adults, has often appealed to people of all ages. The costumes and set for this musical adaptation were a challenge to make the intricate fantasyland come alive. “There’s so many different, interesting characters as far as the costumes, and it is a big challenge to portray those wonderful magical characters in the book. ... We’ve also done a lot of learning (such as with) the battle scene — stage fighting, learning fight choreography.” The performance will feature Jake Brady as Aslan, Jessie Douglas as The White Witch , Jonah Christoff as Edmund, Rachel Moore as Lucy, Abby Outterson as Susan, and Roy Pride as Peter. Playing the “bad guy” has been something new for Douglas, 15, of Morgantown. She is the White Witch in the “Narnia” performance. “I’ve never really played someone evil before,” she laughed. She spent some time preparing for the role. “I reread the books and paid a lot of attention to what C.S. Lewis said about the character,” Douglas said. Brady, 18, of Morgantown, who plays Aslan, said a couple of challenges were learning an English accent and playing a lion. “What I did, I mainly I watched a lot of videos of lions to try to get down the movement,” he said. “There’s no lion that walks on two feet (like he does in the play). It’s my own interpretation. (But I) take the aspects of how a lion would walk and how he’d move his head. And the emotions he would feel and how he’d move then.” Brady will go onto study theater at WVU this fall, and says the MTC has really helped him development more confidence. “I think it’s been good or me being a part of the MTC because I used to be a really shy person,” he said. “It’s helped me with my confidence. It’s built a lot of character in me.” Fredrica Dooley-Brown, 17, of Fairmont, is Mr. Tumnus in the production. When asked what it’s been like to play a male fawn in “Narnia,” she said she’s had to make herself masculine and lower her voice with an English accent. The MTC is open to Marion County residents and surrounding areas. And Dooley-Brown said she’s enjoyed being a part of the MTC. “It’s been a great experience. Everyone is very nice, and you have to be hard working to make sure you get everything finished,” she said. Show times for “Narnia” are 7:30 p.m. on Friday and Saturday, and 3:30 p.m. on Sunday. Ticket prices are $8 for adults and $5 for children. For more information or tickets, go to www.morgantowntheatrecompany.org or call 291-6826. The MTC box office will be open two hours prior to the performances, but will not accept credit cards at that time. E-mail Jennifer Roush at jroush@timeswv.com.

George Lee Huey, 93, of Fairmont, passed away on Tuesday, May 11, 2021 at Fairmont Healthcare and Rehabilitation Center. He was born June 26, 1927, in Fairmont; the son of the late George C. and Anna O. (Dixon) Huey. George was a United States Army veteran and served during WW II. He worked …

Helen D. Bodzek Merico, 99, of Fairmont passed away Sunday May 9, 2021. Arrangements are under the care of Ross Funeral Home 801 Fairmont Avenue Fairmont. A complete obituary will follow.