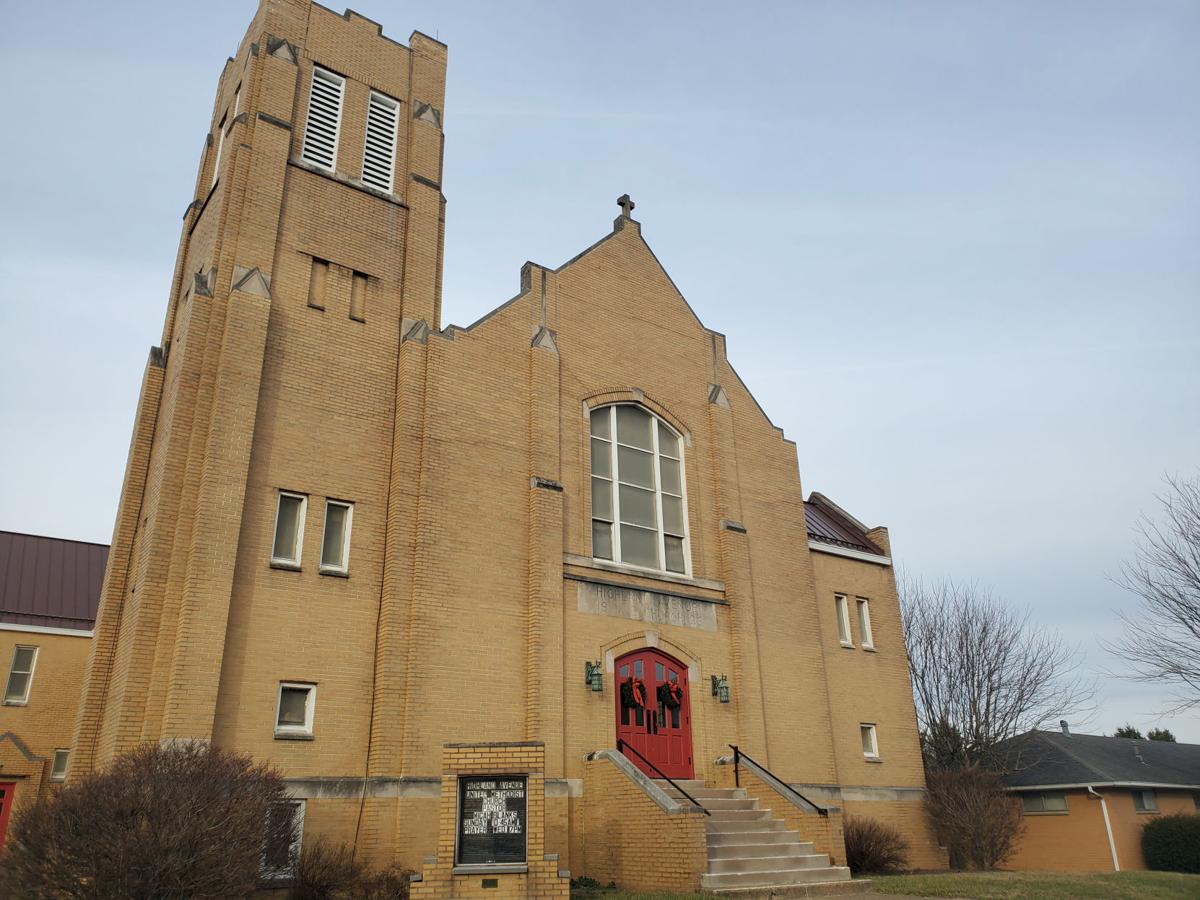 There are numerous United Methodist Churches in Fairmont and Marion County that will have to make a decision about which plan they will operate under after this year’s General Conference. Shown is Highland Avenue UMC 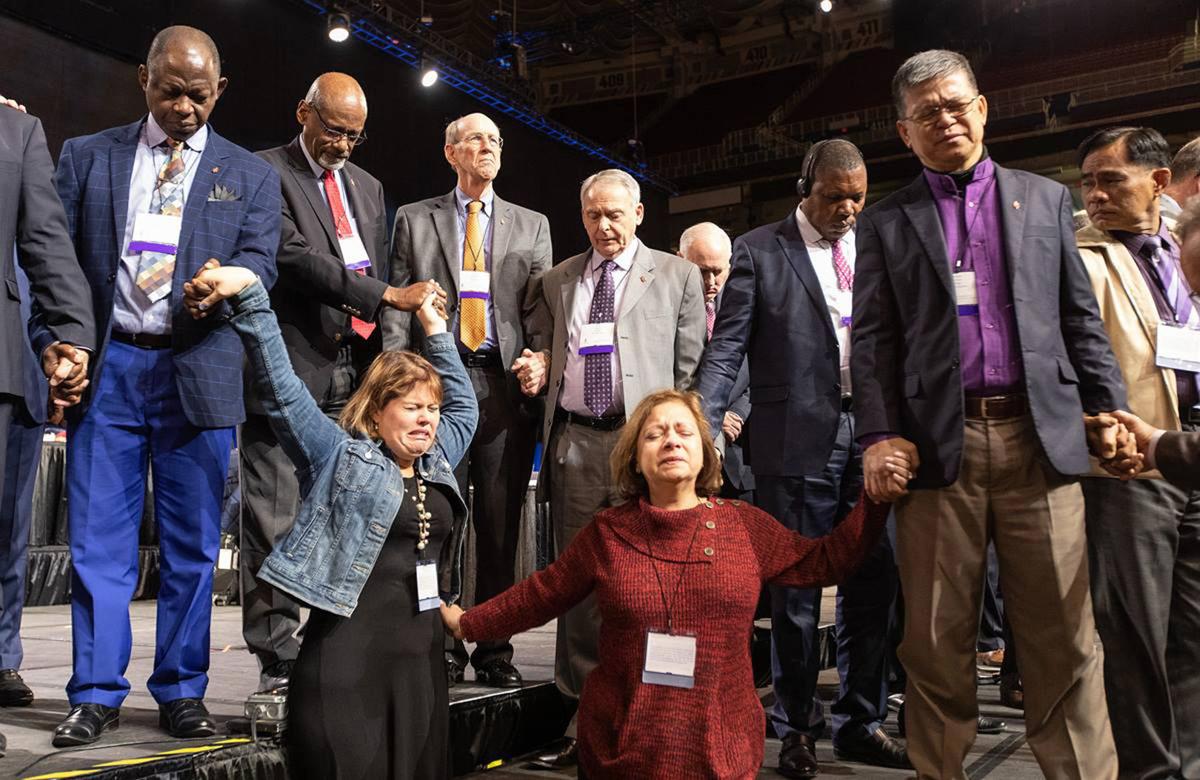 Florida delegates Rachael Sumner, front left, and the Rev. Jacqueline Leveron, front right, of the UMC’s Florida Conference join in prayer with bishops and other delegates at the front of the stage before a key vote on church policies about homosexuality during the 2019 United Methodist General Conference in St. Louis.

There are numerous United Methodist Churches in Fairmont and Marion County that will have to make a decision about which plan they will operate under after this year’s General Conference. Shown is Highland Avenue UMC

Florida delegates Rachael Sumner, front left, and the Rev. Jacqueline Leveron, front right, of the UMC’s Florida Conference join in prayer with bishops and other delegates at the front of the stage before a key vote on church policies about homosexuality during the 2019 United Methodist General Conference in St. Louis.

FAIRMONT – While a proposal to split one of Protestantism’s largest denominations still needs the approval of its global decision-making body, local members of the United Methodist Church are torn over the reasons for the pending schism.

As drafted, the Protocol of Reconciliation & Grace Through Separation, would create a new conservative “traditionalist” Methodist denomination that would receive $25 million over the next four years to fund its launch.

The Traditional Plan as amended, affirms the church’s current bans on ordaining LGBTQ clergy and officiating at or hosting same-sex marriage ceremonies.

“This is one of a number of resolutions that will be coming before the whole Methodist Church,” said Rev. D.D. Meighen, a retired United Methodist pastor in Fairmont. “There are five or six different proposals, and this is one of them, and it looks like an attempt to offer a compromise between those who accept the LGBT community, and those who do not accept the LGBT community.”

While the LGBTQ issue is one that has been the subject of argument in other denominations as well, Meighen said ideological beliefs have come between members of the United Methodist Church in the past, and this issue is no different. He also said he would not like to see this issue break up the UMC.

Carolyn Orr, a member of Highland Avenue Methodist Church, said she is against the acceptance of homosexual leadership in the church based on what she believes the Bible says.

She referenced several Bible passages that she interprets as condemnations of homosexuality, and said that she will remain against its acceptance even if the church changes its doctrine.

“The scripture teaches that homosexuality is sin,” Orr said. “Why should we have somebody living in sin preaching in the church. I am against that altogether.

“In other words, I’m going by what the Bible says. No matter what the church says, we have to go with the word of God because he has the final say.”

Orr also referenced a Bible passage that says “A house divided against itself cannot stand,” and said she believes this is another warning from God. Because of this passage, she does not want to see the church break up at all.

“In Mark 3 verses 23 through 26, it talks about a house divided against itself cannot stand,” Orr said. “They’re talking about splitting the church, well if that’s the case then it will not stand.”

Former United Methodist pastor Bob Roberts previously served a UMC in Farmington, but left the denomination when leadership found his beliefs did not align with those of the church.

“I found it particularly challenging with the Methodist Church when you had all these churches saying ‘All are welcome,’” said Roberts, who is now a pastor at First Christian Church in Morgantown. “If your overarching statement is that homosexuality is incompatible with Christianity, you can’t possibly be welcoming to all people.”

“My sister is a member of the LGBT community, I have a lot of gay friends, and I was at the point where I couldn’t look them in the face and tell them ‘I’m a pastor in this church that won’t accept you,’” Roberts said. “Those attitudes are just so beaten in and entrenched, folks are repeating what their church taught them in the ‘70s and ‘80s and that is a hard road to turn. They have a lot of work to be done.”

Roberts also referenced the Bible and its teachings as supportive of accepting beliefs, and said his interpretation is that it teaches acceptance and love for everyone regardless of who they love.

“One of the turning points for me was frankly just reading the Bible,” Roberts said. “If you come out of reading it thinking that you should be hateful and not loving of anybody out there, I just don’t know what to tell you.”

Meighen, too, said he believes the church should accept all people, including LGBTQ members. He would like to see the UMC work towards a more accepting environment.

“I would be hopeful from my personal standpoint, that we could get beyond labeling people, and see everybody as a child of God,” Meighen said. “I support the inclusion of people within the community of faith.”