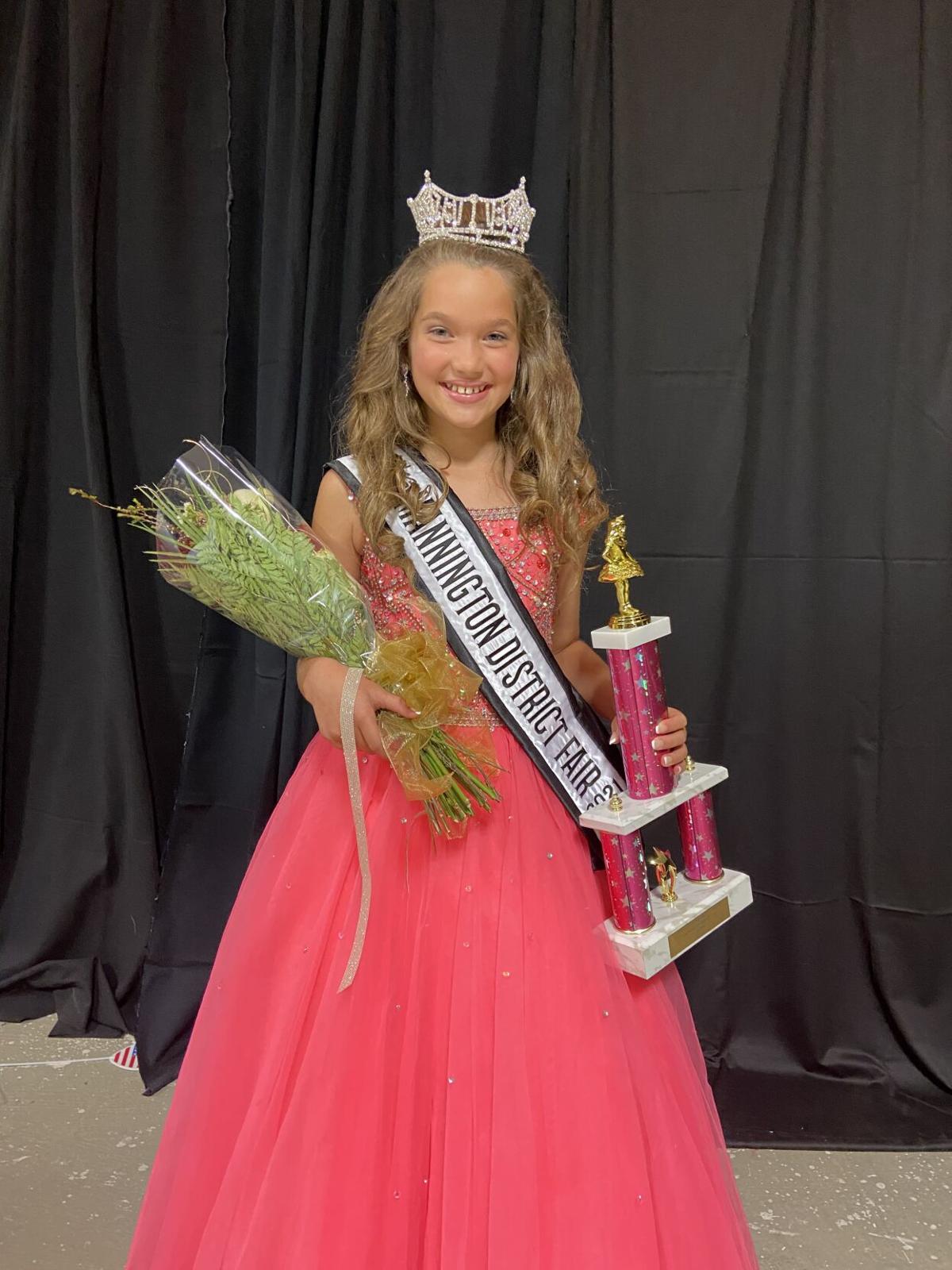 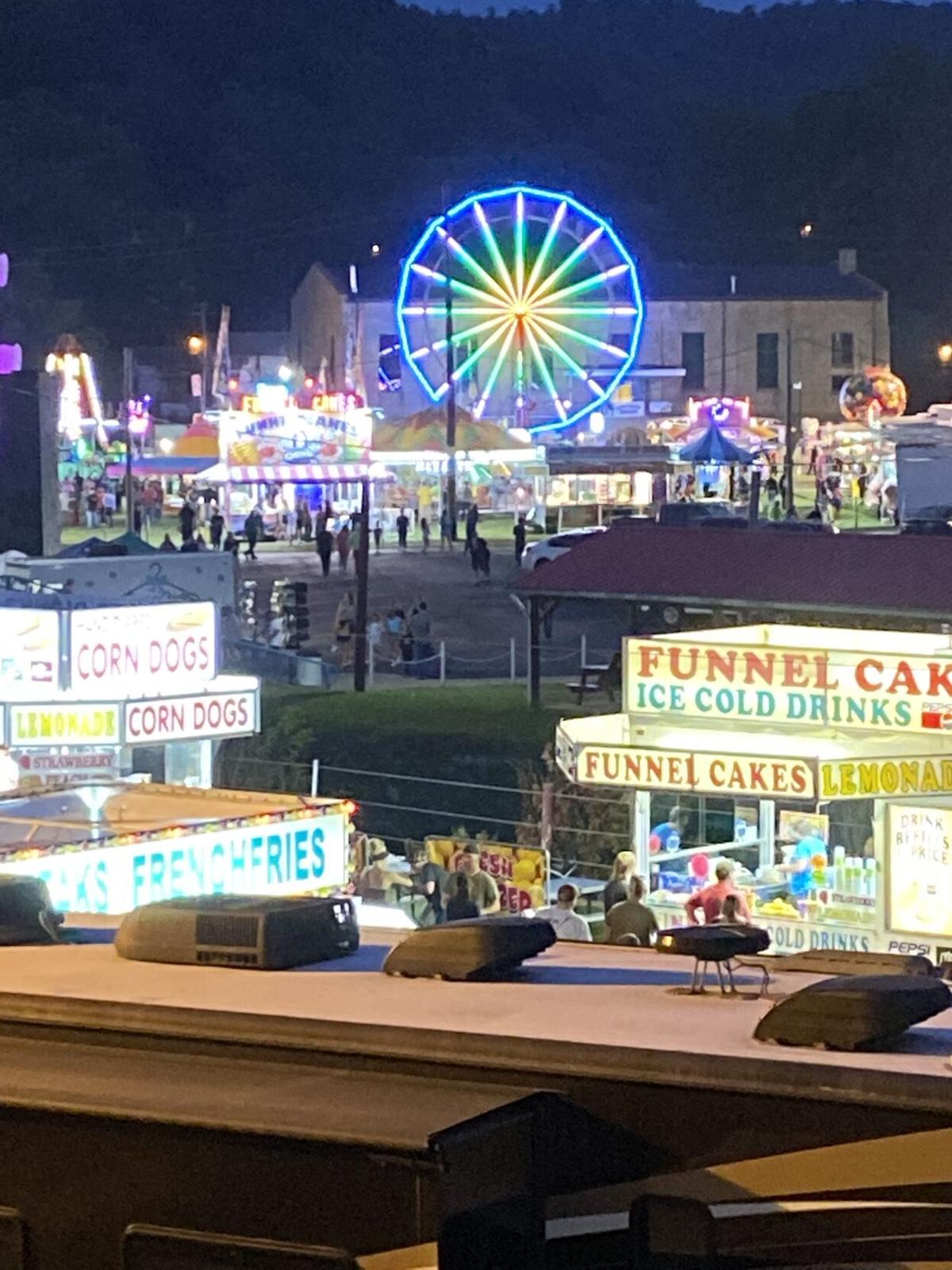 The Mannington District Fair is back this year after being cancelled due to COVID-19 last year. The fair kicked off Monday and runs through midnight Saturday.

The Mannington District Fair is back this year after being cancelled due to COVID-19 last year. The fair kicked off Monday and runs through midnight Saturday.

MANNINGTON — At 8 o’clock on Monday evening, 10-year-old Izabella Steele learned she is the 2021 Little Miss Queen for the Mannington District Fair.

Nine little contestants, ages 6 to 10, squelched their nerves, walked on stage and introduced themselves. The girls were judged on their answers to questions during an off-stage interview, as well as their onstage introduction, theme wear and formal wear. They also performed an unscored choreographed dance, just to do something with those stage jitters.

This year’s theme for the costume competition was “Everyday Heroes” to honor those who served during the pandemic. “Each contestant chooses a specific ‘character’ for their theme wear,” said Brittany Cross, one of the event coordinators. “We have all ranges of costumes, from homemade to store bought to rented.”

The girls chose a hero in advance, then dressed up as they believed that person would dress. Since duplicates weren’t allowed, the girls were able to express themselves without fear of similar costumes. Heroes included a doctor, nurse, EMT, soldier, veterinarian, grocery store worker, train conductor and school bus driver.

Following contest rules, contestants were all from Marion County, and when the evening portion was over, there were plenty of awards. Bailyn Enyart was named most photogenic, based on the number of likes on the Fairmont community Facebook page.

Dakota Summers was named Little Miss Personality by her fellow contestants. Second runner up for Little Miss Queen title was Krosbi Toothman. And should this year’s winner, Izabella Steele, not be able to carry out her duties, Avery Hawkinberry will step in as first runner up.

To add a humanitarian element to the pageant, organizers Brittany Cross and Bridget Travinski started a food drive competition for the girls. “We have a queen of hearts award,” Cross said. “Bridget and I started it a few years ago after the former president of the fair, Bob Thorne, passed away. Each contestant collects food, and the contestant with the most food wins.”

Cross said the food drive is an optional contest for the girls, but with more than 10,000 food items collected this year, it appears to be popular. Some girls organized food drives at local businesses to boost their numbers.

“We wanted the pageant to mean something to the community,” Cross said, “more than just a crown and sash.”

The winner of this year’s queen of hearts award, with more than 3,400 items collected, was Krosbi Toothman.

“This morning [Tuesday], the fair and pageant directors delivered [the food] to the Mannington Food Pantry,” Cross said.

The Little Miss Queen pageant was one of several events that kicked off the 2021 Mannington Fair. Also on Monday was the grand parade, which made its way through downtown Mannington, as well as the introduction of this year’s fair queen candidates.

Returning to the fair this year is the popular Kent Family Circus, performing several times over the course of the fair. “They’re always a huge draw for people. They do a little bit of everything,” said Eva Yoho, the fair’s publicity coordinator.

“We’re having drag races Saturday night,” Yoho said. “And, we’ll have a magician on the grounds, TJ Hill, he’s new, he will be strolling and doing a stage show on Saturday.”

One popular fair tradition that has been around for many years, said Yoho, is the lightweight and heavyweight horse pulling events. Also, talented artists from around the county have submitted their handmade quilts for a quilt show that will be held in the community center.

“Everybody has been cooped up for so long,” Yoho said. “I think they are so excited just to be out, and to have a little bit of ‘normal’ in the community. Everybody seems to be really, really happy, getting to see friends and family that they’ve not seen now for over a year.”

Fair attendance Monday night was about what it has been in previous years, said Yoho. “But I would say with rides are up and running, we’re going to see a much larger crowd than we have in the past. People want to go out. They want to go do something,” she said.

The musical performance scheduled for Wednesday is Rick K Road Trip. On Thursday, the stage will be held by the Davisson Brothers; and on Friday, fans of Jason Michael Carroll will be able to see him perform on the main stage. All musical performances take place at 7 p.m. and 9 p.m. There’s no extra charge to attend the music performances.

On Saturday, musicians are invited to gather on stage for an old-fashioned music jam. Starting at 1:30 p.m., musicians of all skill levels can hop on stage for fun, foot-stomping music-making. People who would like to participate in the open jam are encouraged to bring instruments, and reminded not to worry if they’re not well-versed in old-time music. This gathering on Saturday is a modified version of PattyFest, an annual celebration of old-time mountain music that was canceled last year and this year due to the pandemic.

Ride passes will be on sale each night, and entitle the wearer to unlimited rides that evening. At the door, ride passes are $20 during the week, and $25 for Friday and Saturday nights, which have extended hours. To buy ride passes in advance for a small discount, go to www.gambillamusements.com. The fair will conclude Saturday night at midnight.

Fair admission is $7 for adults and free for kids 11 and under. For a complete fair schedule, go to www.manningtondistrictfair.org.