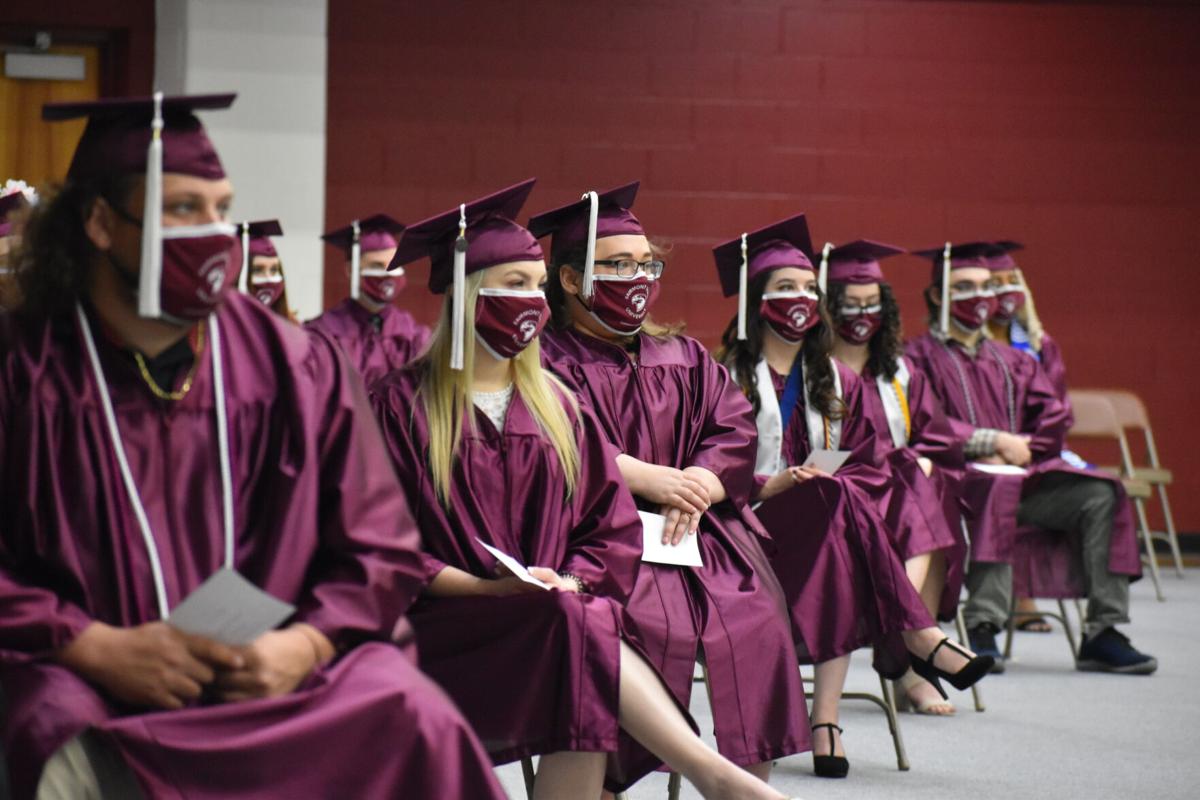 Fairmont State graduates listen to the speakers during Sunday’s commencement ceremony. For the story, see Page 3A. 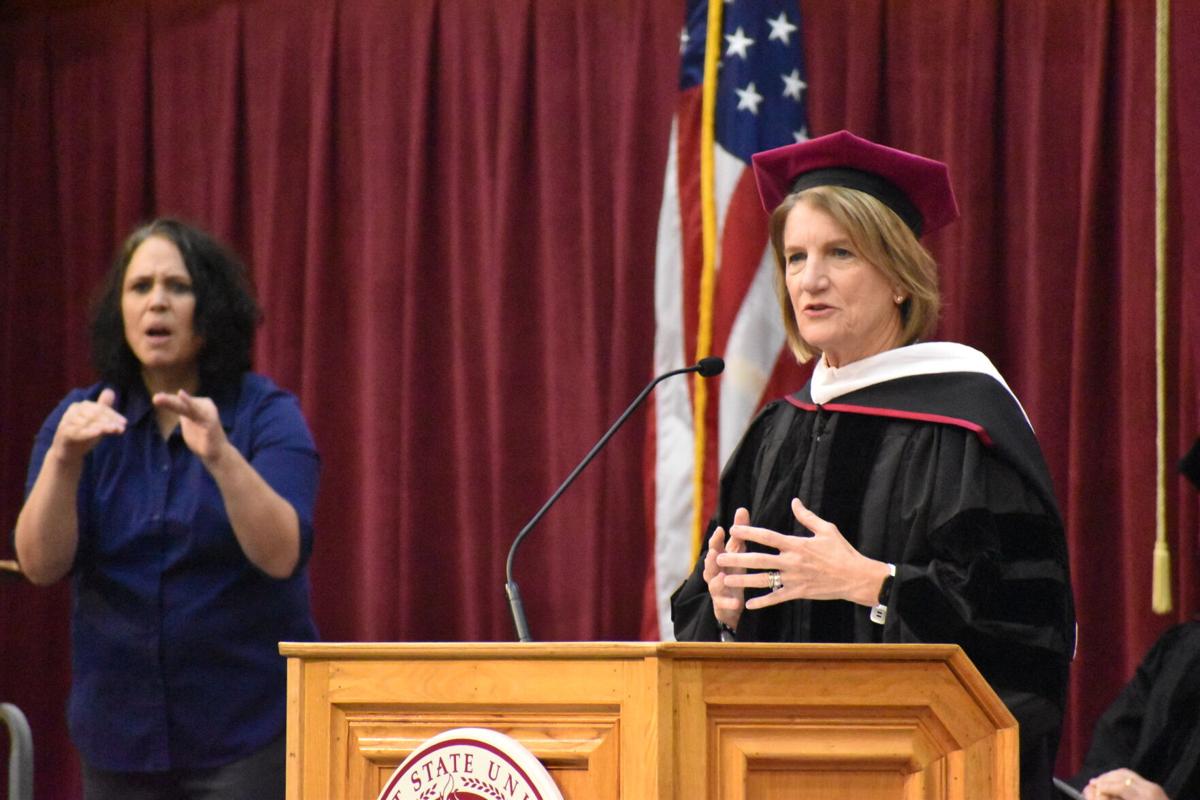 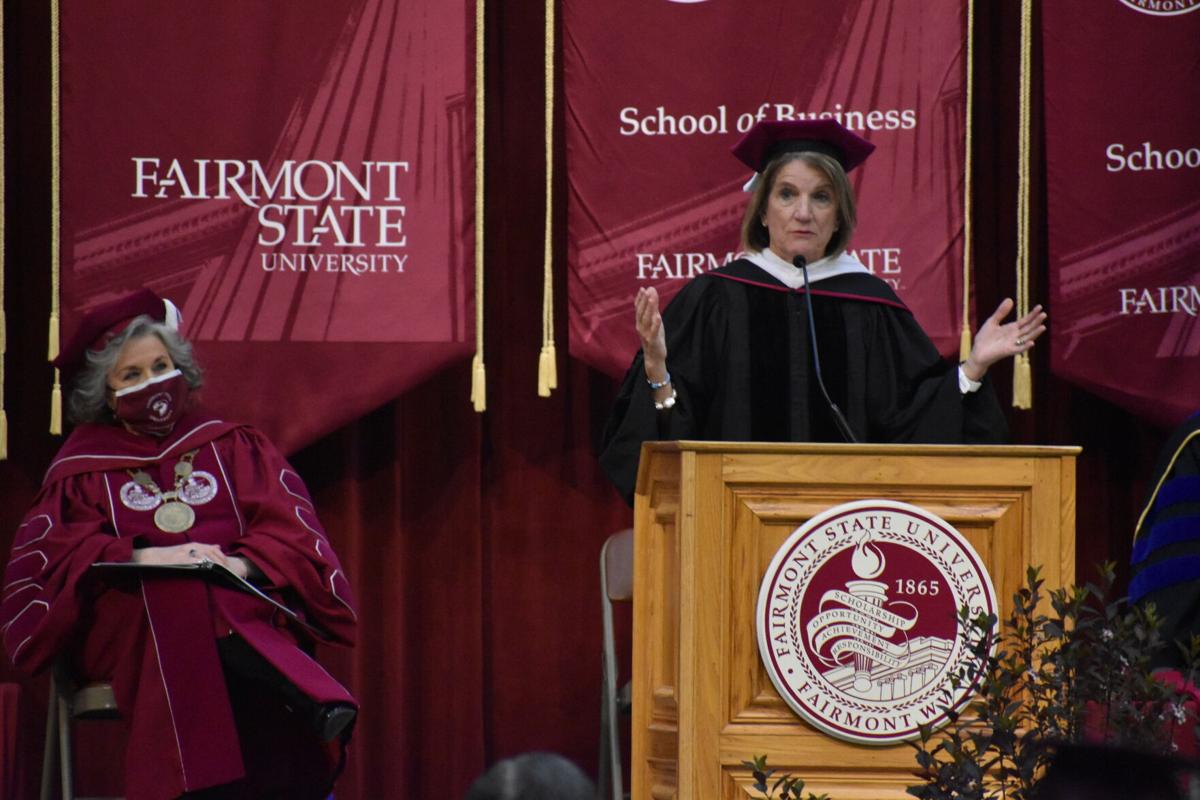 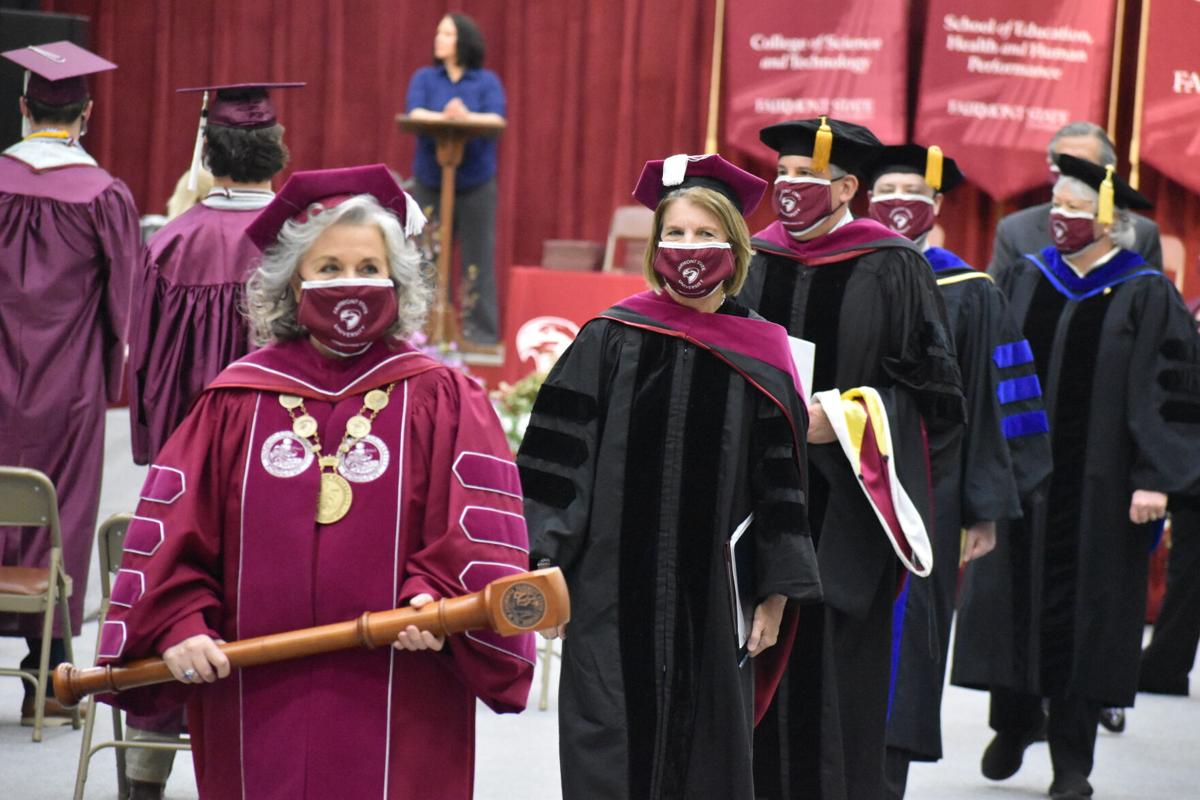 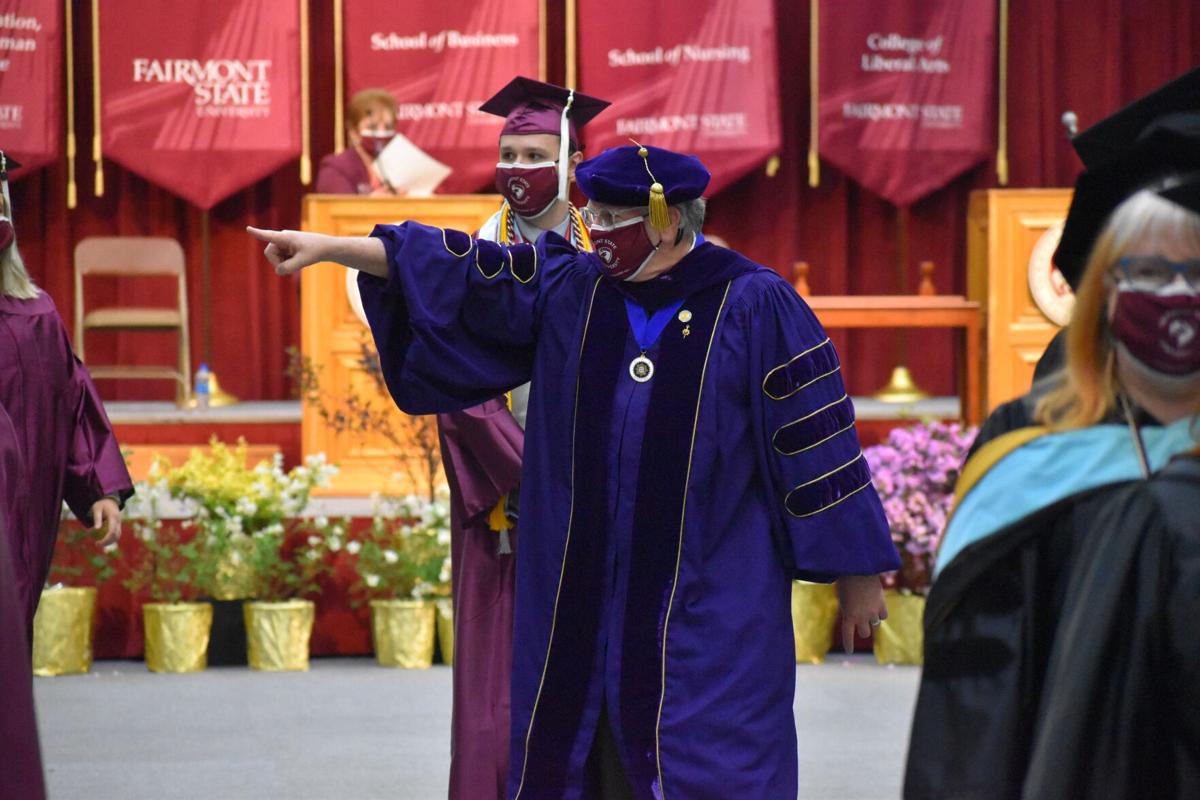 John "Doc" O'Connor congratulating a student as he exits with the precession. 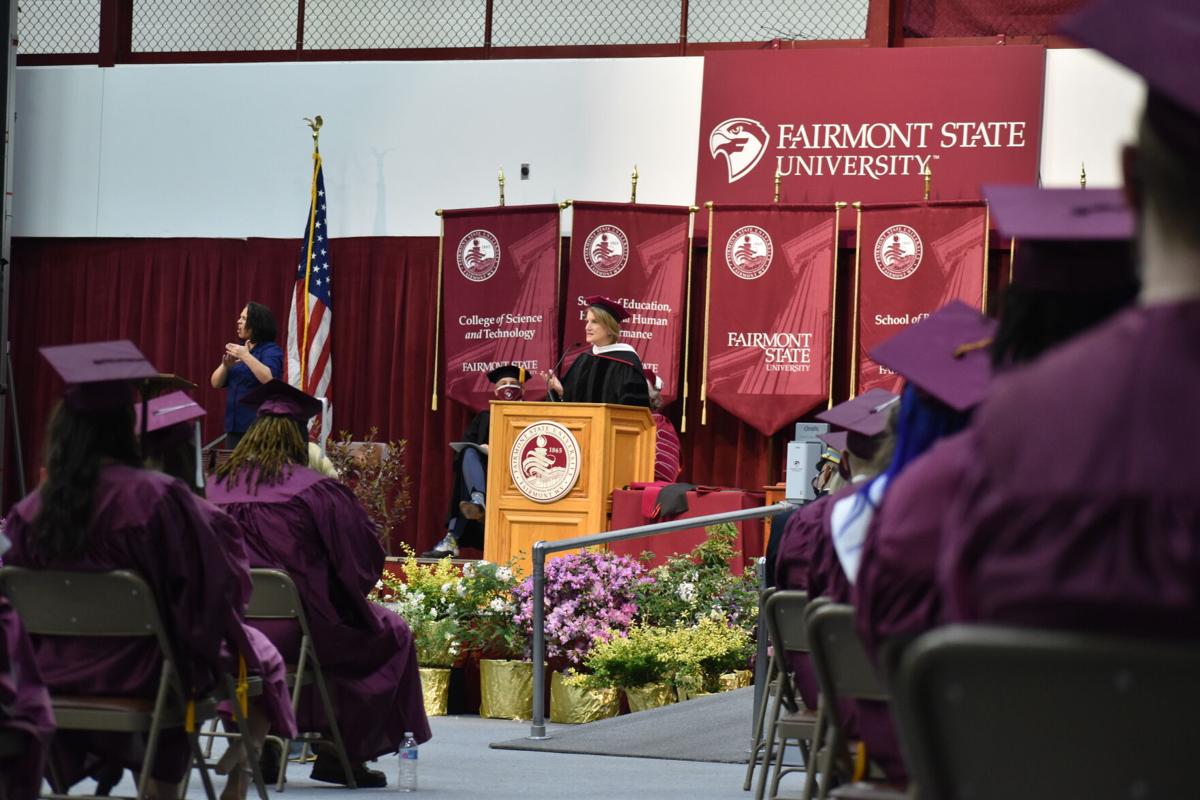 Fairmont State graduates listen to the speakers during Sunday’s commencement ceremony. For the story, see Page 3A.

John "Doc" O'Connor congratulating a student as he exits with the precession.

FAIRMONT — After a year hiatus amid the COVID-19 pandemic, Fairmont State University held its 2021 commencement in person.

Last year, COVID-19 brought a halt or vast change to everything normal and the university had to move its commencement ceremony online. But this year, graduates filled the Feaster Center and walked in-person.

“A year ago I stood here — well not here, but on camera,” Martin said. “You each have proven that you have the ability to overcome, adapt and innovate.”

The weekend’s commencements honored graduates from both the 2020-21 school year and the 2019-20 school year. These ceremonies together involved over 400 graduates.

The weekend contained six separate ceremonies for the different schools and colleges under the university. Each ceremony saw the graduates file into chairs spaced apart on the floor of Joe Retton Arena.

The keynote speaker for Saturday’s ceremony was Gayle Manchin, co-chair of the Appalachian Regional Commission and director of the university’s first Community Service Learning Program and wife of Sen. Joe Manchin.

”The most difficult thing is the decision to act, the rest is tenacity,” said Manchin in her address.

Manchin’s speech centered around that quote, driving home the idea that the students’ only limits are the limits they place on themselves.

”The courage to act upon your dreams,” Manchin said. “Then you can do exactly what you dream to do.”

Sunday’s keynote speaker was U.S. Sen. Shelley Moore Capito, R-W.Va., who was awarded an honorary Doctorate of Humanities after her speech.

“I add my voice to the many voices saying, ‘good job,’” Capito said, in her remarks. “These circumstances have been difficult on all of us, but, certainly, seeking your education during this time is an added stress.”

Capito and Manchin were originally booked to speak at the 2020 commencement, however, due to COVID, that ceremony was cancelled and moved online. When asked to return, both speakers agreed again to speak at this year’s graduation.

The speakers continually mentioned the difficulty of the past year, and praised students for their resilience and diligence. Many of the graduates are glad the majority of the stress is behind them.

“The adjustment to online classes was really tough,” said Cameron Russell, who graduated Sunday with a degree in sociology and psychology. “I worked in the dorms as an RA. Having to enforce things like masks and sanitation, it’s been a really stressful adjustment for students.”

The professors had a tough time as well with the adjustments necessitated by the pandemic. Another graduate, Jaden Savage, is thankful for all the extra work that went in this year.

“I think our professors have really tried to help us the best they could while adjusting to all the different teaching styles,” said Savage, who graduated with a degree in criminal justice on Sunday. “It was an adjustment for sure.”

Now that the ceremony is out of the way, they look forward to the next chapter in their lives.

“I’m very excited,” Russell said. “I took two extra years because I switched my major, but I’m very excited to move on to the next phase of my life.”

“It feels very rewarding and achieving,” Savage said. “It’s accomplishing to say despite a lot of changes that I still met my end goal.”