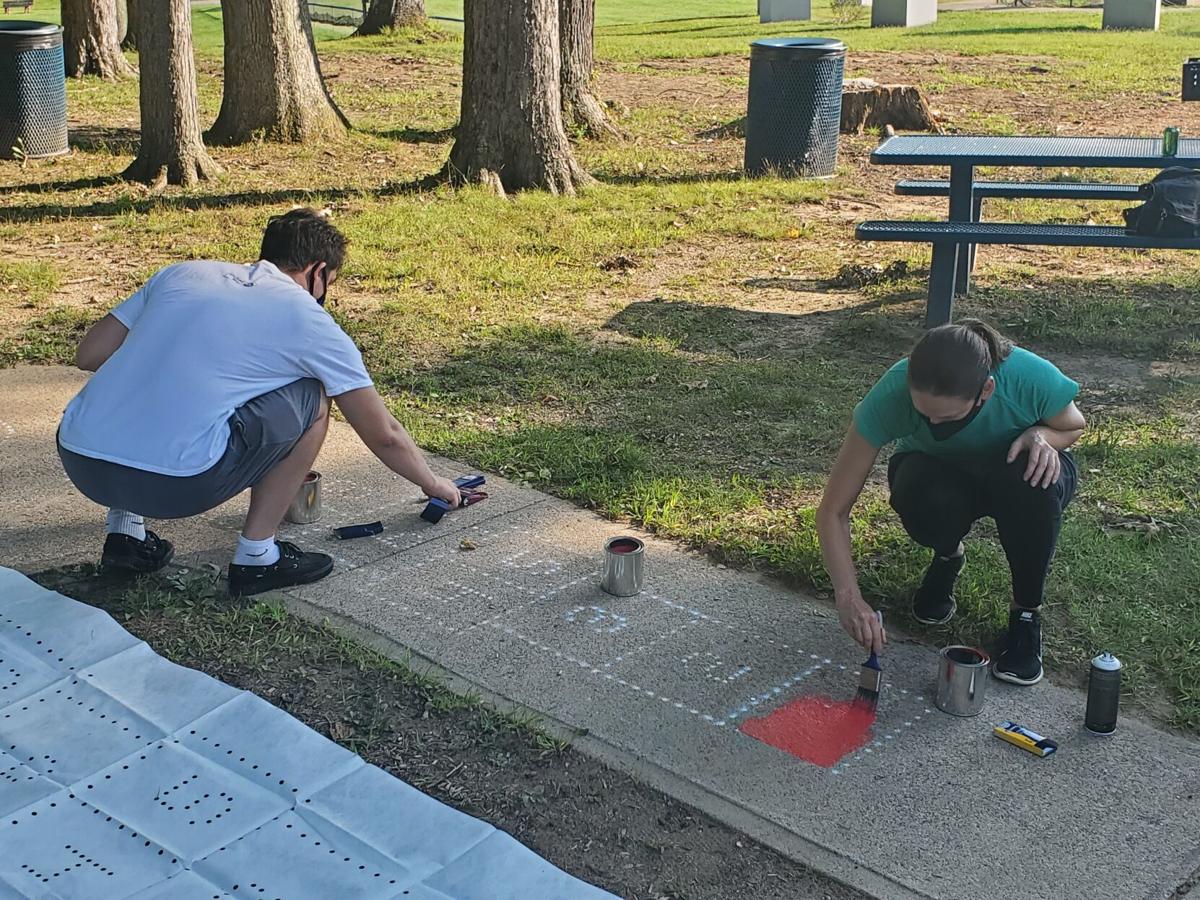 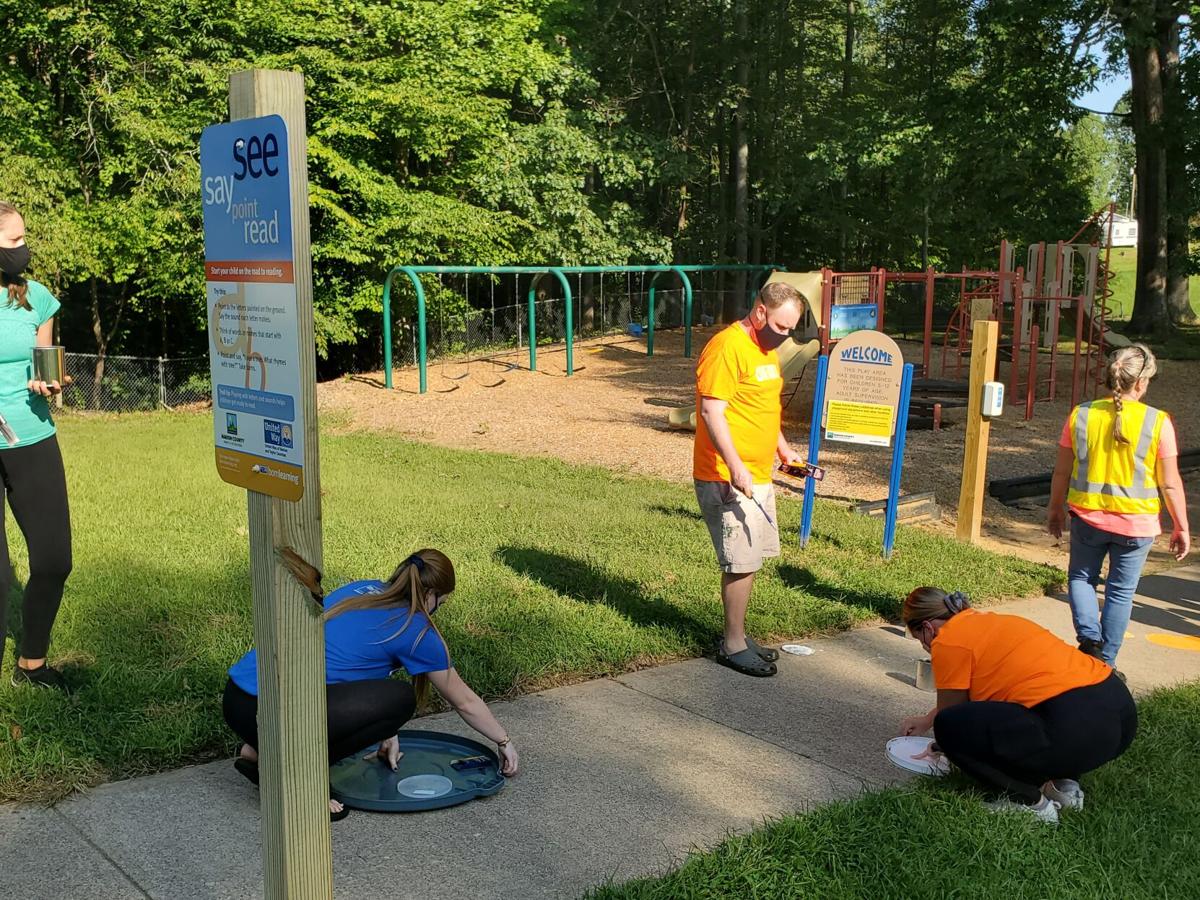 Volunteers paint the sidewalk of the Born Learning Trail, that was installed Tuesday at Mary Lou Retton Park.

Volunteers paint the sidewalk of the Born Learning Trail, that was installed Tuesday at Mary Lou Retton Park.

FAIRMONT — Looking out at the landscape of Mary Lou Retton Park, Joel Dugan sees a canvass ripe for visual decoration.

On Tuesday, Dugan, who is chair of the Art, Architecture and Design Department at Fairmont State University, painted new shapes and designs on the sidewalks of the park, along with a few of his students who volunteered their time alongside him.

The art is a new feature of the Born Learning Trail, which the United Way of Marion and Taylor Counties worked with the Marion County Parks and Recreation Commission to install, in order to expand on the recreational opportunity available in the park.

“It really is a common goal to have an environment that is more interactive and engaging to young children, at a time when so much is being developed mentally and physically for them,” Dugan said. “We are just really excited to participate, and I think my kids have used this park before. I just think the park is such a great canvass for it.”

Born Learning Trails are present in parks across the country, installed by individual United Ways throughout the U.S. as community projects. Emily Swain, community impact director for the United Way, said she worked with MCPARC on the Mary Lou Retton Park project, to enhance the park and its offerings.

“It’s a nationwide initiative with United Way for early learning and early childhood education,” Swain said. “They’re all across the country, and this one in particular was exciting for us because MCPARC was involved and they saw the value in the program and the value added to the park for their community members.”

Swain said the United Way and MCPARC aimed to install the trail signs around March this year, but the coronavirus pandemic held the organizations up until now. However, the timing of the project actually makes it even more relevant, because of the intended purpose of the Born Learning Trail.

A Born Learning Trail is mainly made up of signs, which provide instruction to kids and their parents for a specific activity to do at each stop on the trail. Swain said the trails are meant for young children, who benefit from activities that engage different aspects of their development.

“It’s for early childhood, so younger kids and even early elementary students, their parents or caregivers can walk through the trail with them and each sign gives educational prompts for the children to respond to,” Swain said. “So it’s engaging their body, it’s engaging their mind, it’s engaging all of their senses by being outside and encouraging physical movement as well as educational activities with word recognition and being aware of storytelling.”

Rachel Mitchell, assistant director of the Marion County Parks and Recreation Commission, said she was excited for the project. She said of all the parks maintained by MCPARC, Mary Lou Retton Park was a good candidate because of its landscape and its accessibility.

“We chose Mary Lou Retton because it had an excellent sidewalk and it was accessible,” Mitchell said. “So this is an excellent opportunity to get kids outside of all ages and families alike, and just create an interactive area.”

Mitchell agreed that the timing of the trail’s installation could not have been better, because parents and caregivers can bring their kids to the park knowing they can participate in its activities while social distancing.

“It being in an outdoor park setting, it’s always open to the public, so it’s easily accessible for everybody,” Mitchell said. “It is a socially distanced activity, so even if you’re by yourself or with your family, you can do this and stay properly spaced.”

The installation of the trail acted as the kickoff of the annual United Way Campaign, which officially began Tuesday morning. Although this type of event is not typical of the campaign kickoff, Brett White, executive director of the United Way, said the installation of the trail aligned with the values of the United Way, which invited some of it community volunteers to help complete a project to benefit others.

“Doing a volunteer project is always important to us,” White said. “The Born Learning Trail has been something we had wanted to get started, and we had it planned before COVID, and we thought this would be an excellent opportunity to social distance, be outside and to kick off the campaign while actually doing something.”

Mitchell said the trail should be completed and ready for interaction by the end of the week. Dugan he believes public art can enhance the experience of being outdoors and in nature.

“It’s interesting how simple things can draw you into an environment,” Dugan said. “I think that’s such a big part of this is each one of these little signs is a prompt to find new ways to engage with the surrounding space and allow your children to have wonder and excitement of being a part of the natural landscape and seeing everything.”