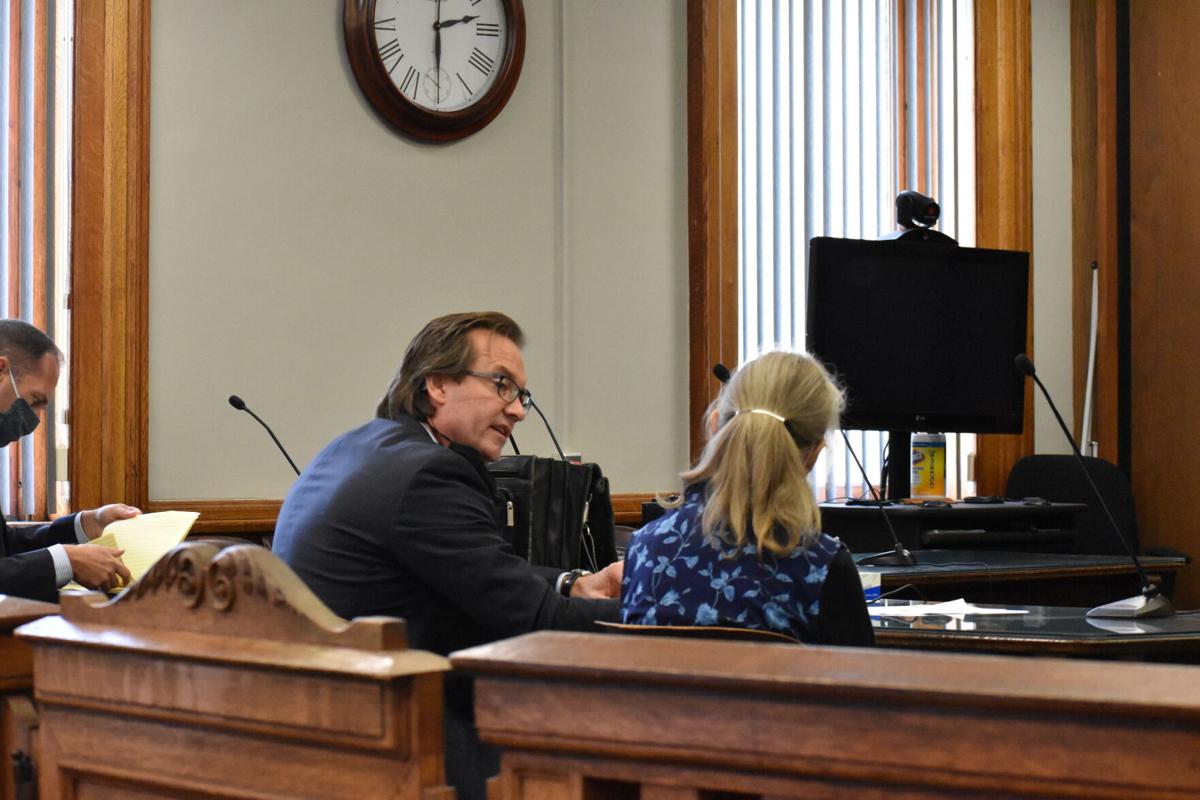 Charleston-based attorney Tony O'Dell, left, questions his client, Emily Santini, the widow of Steven Gene Santini, who was killed in July 2019 in a crash with a Fairmont Police Department police K9 vehicle. Monday, a judge approved the $1.8 million settlement agreement.

Charleston-based attorney Tony O'Dell, left, questions his client, Emily Santini, the widow of Steven Gene Santini, who was killed in July 2019 in a crash with a Fairmont Police Department police K9 vehicle. Monday, a judge approved the $1.8 million settlement agreement.

FAIRMONT — A Marion County judge approved a $1.8 million settlement agreement between the City of Fairmont and the estate of a man who was killed in July 2019 in a crash caused by a Fairmont Police Department officer.

Marion County Circuit Court Judge Patrick Wilson approved the settlement agreement Monday during a brief hearing where the Santini estate and the contracted attorney for the city agreed to the proceedings.

The victim's wife, Emily Santini, pushed for a jury trial for Streyle with advise from attorney Tony O'Dell, of Charleston, but the request was thrown out. However, the Santini estate and O'Dell were able to come to a settlement with the City of Fairmont for the $1.8 million. This money will be divided up between Emily Santini and her three sons, with an amount of $4253.90 being paid as a fee to O'Dell for legal counsel.

In putting the case to rest, O'Dell said Steven Gene Santini was "a devout man of God" and went on to discuss the three steps of repentance. He said the first step is to accept one's transgression, take full responsibility for it and then, take action to right the wrong that had been committed.

"We all try to teach our children to make it right when they do something wrong," O'Dell said. "The [Santini] family is glad that the city’s insurance company saw the writing on the wall and paid what is fair under the law. But Officer Streyle, and for that matter, the powers that be with the city of Fairmont, will never have closure until there is true repentance."

O'Dell went on to say that the city and the Fairmont Police Department should accept responsibility for Santini's death.

"Now that the case is over, for their sake and the sake of the Santini family, they should call, accept full responsibility and tell the family that they deserved every penny plus their heartfelt apology. And, they should tell Emily and Steven Santini, the son, that they learned from their transgressions and that changes have been made so no other innocent life is lost," O'Dell said.

Judge Patrick Wilson confirmed with Santini and O'Dell that this settlement would essentially end the legal proceedings of this case, and Santini could not file any more lawsuits for the death of her husband.

When O’Dell filed the suit in March, he used data from the police vehicle’s black box that showed the vehicle was traveling “at least 73 MPH in a residential area of Fairmont with a posted speed limit of 35 MPH without sounding the siren and/or the flashing blue emergency lights,” states the original complaint.

In a statement from O'Dell from Aug. 20, he said the reason Santini's estate is seeking so much money in damages is in hopes that this kind of preventable incident will not happen again.

"Money is a poor substitute for the life of a loved one. However, once a very preventable death is tragically caused by the recklessness of a public servant sworn to protect and serve, it is the only way to try and hold those in power accountable," O'Dell said in the statement. "One of the main purposes of civil lawsuits is to shine a bright light on wrongful conduct so that hopefully the same thing doesn’t happen to someone else.

"The Santini family hopes that the senseless death of Steven Santini, a father, husband, brother and dedicated man of faith, results in changes at the Fairmont Police Department. Having a badge does not give anyone the right to needlessly endanger the lives of innocent people. To date, we are unaware of any changes or discipline to the involved officers or the people who tried very hard to cover up this very troubling conduct."

In the original complaint, O’Dell said Streyle's fellow officer, Christopher Guinup, who was riding with him during the fatal crash, had also acted negligently in that he did not ask Streyle to slow down in the 35 mph zone where the crash took place at the intersection of Bison Street.

O’Dell also said the city’s attorneys admitted that Streyle and Guinup were not operating the Dodge Ram in pursuit of a “suspected violator of the law at the time of the motor vehicle crash...,” states court documents.