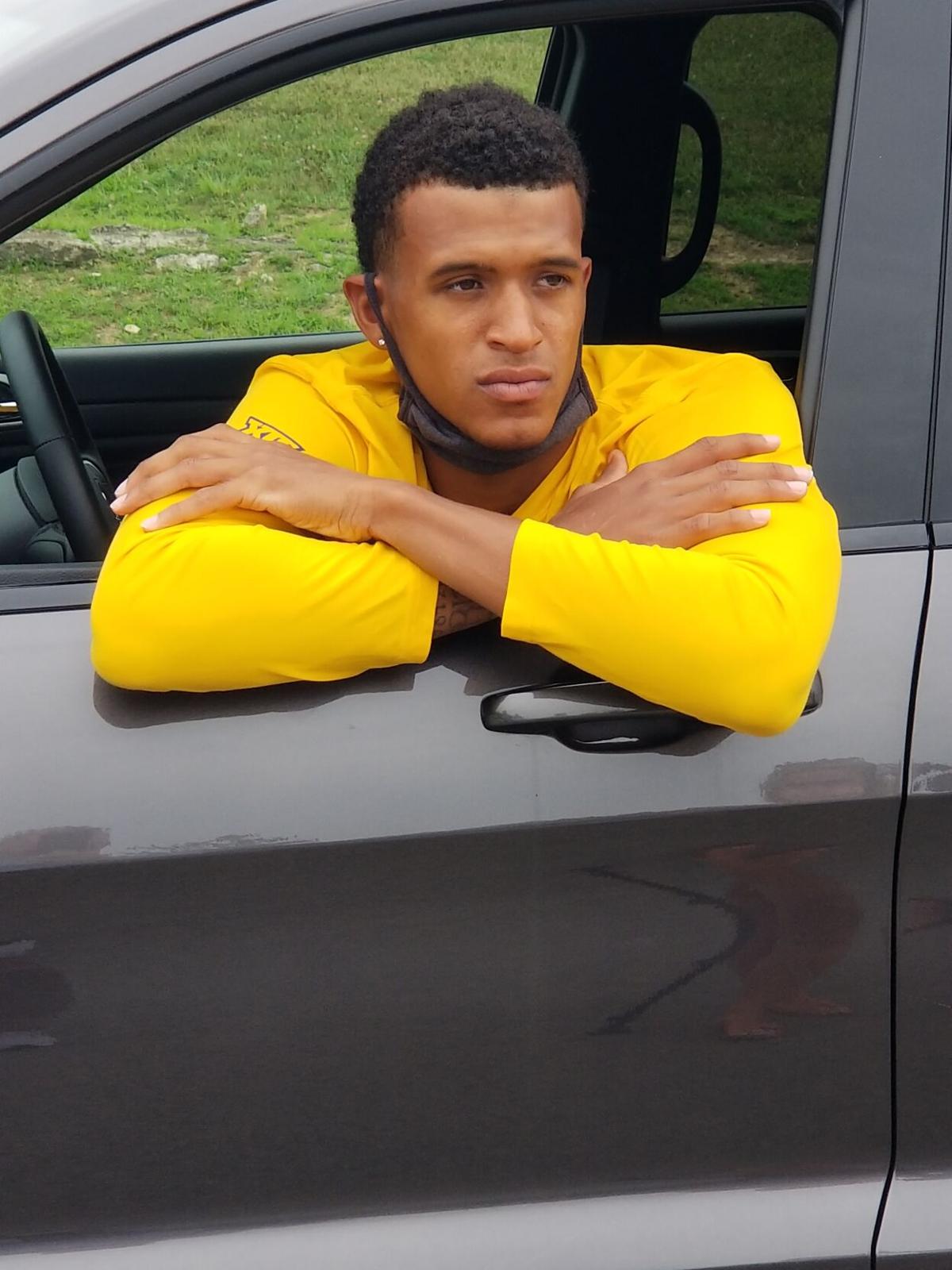 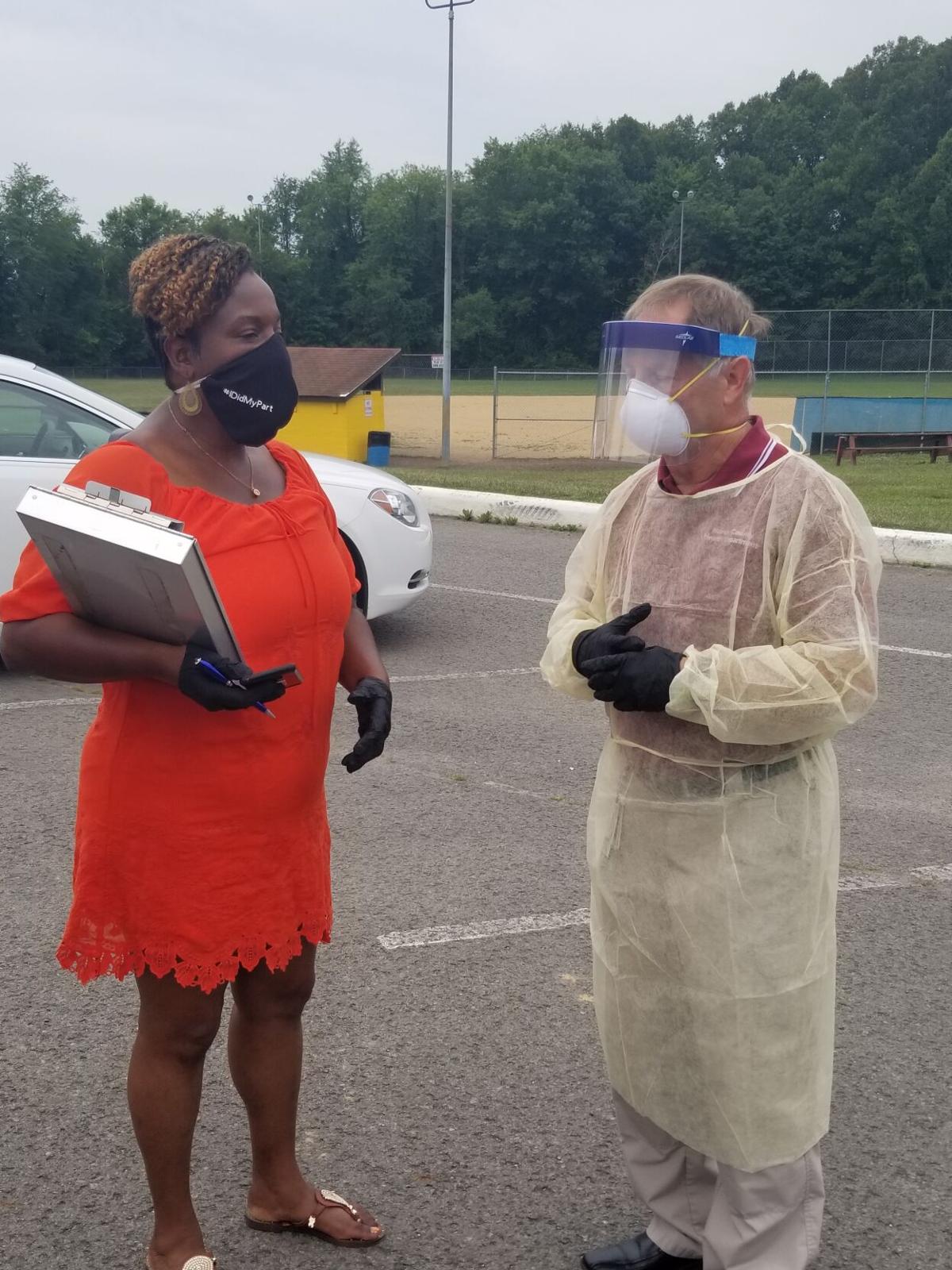 Romelia Hodges, of Fairmont, a member of the Governor’s Advisory Commission on African-American Disparities, discusses COVID-19 testing with Marion County Health Department Administrator Lloyd White Thursday at a demo session at Windmill Park to explain how easy and painless testing is for the virus.

Romelia Hodges, of Fairmont, a member of the Governor’s Advisory Commission on African-American Disparities, discusses COVID-19 testing with Marion County Health Department Administrator Lloyd White Thursday at a demo session at Windmill Park to explain how easy and painless testing is for the virus.

FAIRMONT — Marion County residents, especially younger members of the African-American community, a group that is being disproportionately affected by the COVID-19 crisis, are encouraged to participate in free, quick, drive-thru coronavirus testing this weekend.

The testing will take place Saturday, Aug. 1, from 9 a.m.-4 p.m. at Windmill Park in Fairmont. No appointment is necessary for the procedure, which takes only seconds.

The commission particularly encourages young people to be tested, as the rise in coronavirus cases has quickly shifted from older to younger individuals.

“Our goal is to get our youth tested. The age range of local individuals with COVID-19 has dropped precipitously within the past month,” said Romelia Hodges, of Fairmont, a commissioner with the task force. “The average age of a person infected with COVID-19 in our area of West Virginia has dropped from age 37 a month ago to age 22 last week.”

African-Americans account for 30% of all COVID-19 cases in the U.S., despite comprising only 13% of the population, according to the Centers for Disease Control and Prevention.

“It’s scary because young adults are very active and very mobile. Oftentimes, these individuals are asymptomatic and possibly taking the virus home to their parents and grandparents,” said Hodges. “My goal as a commissioner is to stop the spread not only among the African-American community, but also the community at-large.”

Both Bridges and Samuels were tested by nose swabs as part of the demo.

“It’s not a painful feeling, more like an awkward feeling, like a bug or something flew up your nose,” said Bridges. “It doesn’t hurt at all and it only lasts about five or 10 seconds.”

Bridges recommends young African-Americans get tested on Saturday at Windmill Park, if not for themselves, then for others.

Samuels echoed Bridges’ sentiment regarding the ease of the test.

“Honestly, it’s just a little tickle,” she said. “It’s very quick and not too bad at all.”

Samuels, who turned 25 yesterday, has friends who have contracted COVID-19.

“I’ve known people in my age group who’ve been ill with coronavirus and others who’ve been asymptomatic, but all of them have dealt with very difficult times,” Samuels said. “One friend of mine had to be away from their family, which is really hard. Another one infected three older family members.”

Tiffany Walker-Samuels, also of Fairmont, is also a commissioner with the COVID-19 Advisory Commission on African-American Disparities. She said it is worrisome the coronavirus seems to be increasingly infecting younger people.

“The average age is dropping each week. When this virus was first detected, it was thought to affect mostly older people. I think young adults believed they were immune and wouldn’t be affected by it. And now they’re the predominant ones who have the virus. They’re also the super-spreaders within the community. It’s critical we get our young adults out and tested,” Walker-Samuels said.

Walker-Samuels said the Saturday testing location was chosen “because Windmill Park is the heart of the African-American community in Marion County. We selected this location because it’s convenient for the majority of the community.”

Marion County Health Department Administrator Lloyd White personally conducted the COVID-19 demonstrations in order to show the speed and ease of a coronavirus swab, as well as to stress its importance in combating the pandemic.

“We wanted to show how testing is not really a big deal. I think a lot of people are apprehensive about testing, they have different perceptions on how it’s done,” he said. “The real value is it lets us know what the prevalence of the virus is in the community. It’s the only way to know if you have it or not.”

Hodges, who once tested positive for COVID-19 herself and self-quarantined for two weeks, encouraged all local residents, and especially younger people, to take advantage of the testing, which is paid for by federal CARES Act funding.

“The testing process is painless, easy, and quick. You don’t even have to leave your car. We want to show people they shouldn’t have any anxiety about coming and getting tested. It’s important to know your status because it’s important to do your part,” she said.