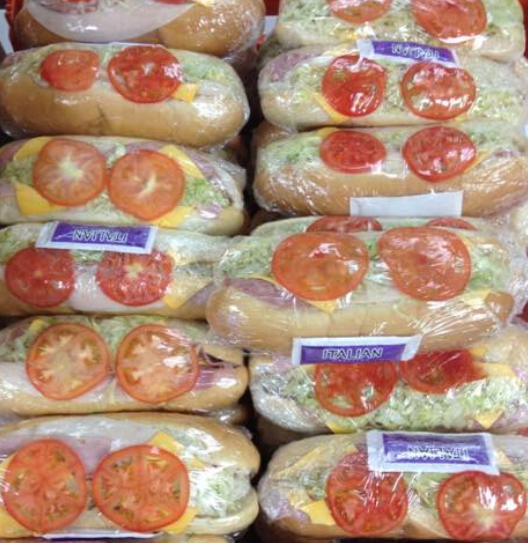 The Disability Action Center is able to hold its annual sub sale this year, by reducing the number of people making the food to allow for social distancing.

Members of the Fraternal Order of Eagles donate a check to the Disability Action Center. From left are Cindy Saloky, Julie Sole, Akira Jones, Crystal Wolfe and Maggie DeNoon.

The Disability Action Center is able to hold its annual sub sale this year, by reducing the number of people making the food to allow for social distancing.

Members of the Fraternal Order of Eagles donate a check to the Disability Action Center. From left are Cindy Saloky, Julie Sole, Akira Jones, Crystal Wolfe and Maggie DeNoon.

FAIRMONT — While the Disability Action Center has several fundraising events it uses each year, the coronavirus pandemic has forced the cancellation or delay of several of those events.

However, one of the nonprofit’s most popular fundraisers — its annual sub sale — will go on this year, with some changes made for safety and social distancing.

“We wanted to be able to still hold this fundraiser in a safe way,” said Julie Sole, executive director of the Disability Action Center. “We feel we can absolutely do that. We have adequate volunteers, we are following all the safety protocols from the Health Department and we are excited to offer it.”

According to Sole, the DAC has been holding sub sales for more than 20 years, and it has grown exponentially in terms of profit every year. In the past, the DAC has sold about 2,000 subs at $5 each in one sale, and with numbers like that, the sale is an integral part of the DAC’s annual budget.

“We really count on not only the funds from this fundraiser, but also the other fundraisers,” Sole said. “They are a vital, vital part of our budget. There’s no way to replace them.”

Although the sale will be scaled back this year in terms of personnel and volunteers, Sole said they are still prepared to make as many subs as ordered. She said she believes the community will still come out and support the sale, seeing that the DAC has helped so many families and individuals in Marion County.

“We are scaling things back a bit, we’re not anticipating as large of a sale as we have done in past years,” Sole said. “The community and our supporters may surprise us, and we may end up bringing in equal to or more than we have in sales’ past.”

The sale will take place Aug. 6 and Aug. 7, and orders for $5 subs can be placed on the DAC’s website or Facebook page.

While a golf fundraiser and a Bingo fundraiser had to be postponed, Sole said she plans to bring those back as soon as conditions are safe. However, Sole received somewhat of a surprise last week, when the Fraternal Order of Eagles donated more than $13,000 to the DAC as one of the organization’s service projects. Current state president of the FOE, Crystal Wolfe, kick started a donation jar project that brought in a total of $8,179 and the organization donated an additional $5,000.

“It’s just a touching thing to my heart,” Wolfe said about the service the DAC provides. “Throughout my life, we’ve had people with disabilities in my family. So it just touched my heart and something I wanted to give back to and do.”

Wolfe said she got the idea for the project at night when she couldn’t sleep, and thought it would be an easy way to convince people to donate, at just a few cents a day. She set a goal to raise $10,000, and came close despite the pandemic taking place.

“I was trying to think of a project that would be an easy project to make money for the DAC,” Wolfe said. “In the middle of the night I came up with this idea of a jar, so I went out and bought 14 jars. And on those jars, we had put vinyl on it that said ‘25 cents daily challenge.’”

These jars were placed in different locations around the county, and would soon fill up with coins that would be donated in check form to the DAC. Wolfe gives the credit for the fundraising to the people who donated, because she’s just the one who set up the project.

“It was my idea to do these jars; it was everybody else who made it possible,” Wolfe said. “I was very surprised, very happy, and if this pandemic hadn’t came along I would have been over $10,000 as the goal.”

Sole said she, the staff and the clients of the DAC are grateful for the Eagles’ donation, especially seeing that many fundraisers have had to be canceled lately. Sole said these funds will help the DAC maintain its programming and will ensure its clients still get the services they need during the pandemic.

“We are overwhelmingly grateful for the efforts of Crystal and her statewide support from the Fraternal Order of Eagles,” Sole said in an email. “Her efforts, along with the grant from the Eagles Charitable Foundation, will make big impact in our children and youth programming and could not have come at a better time.”