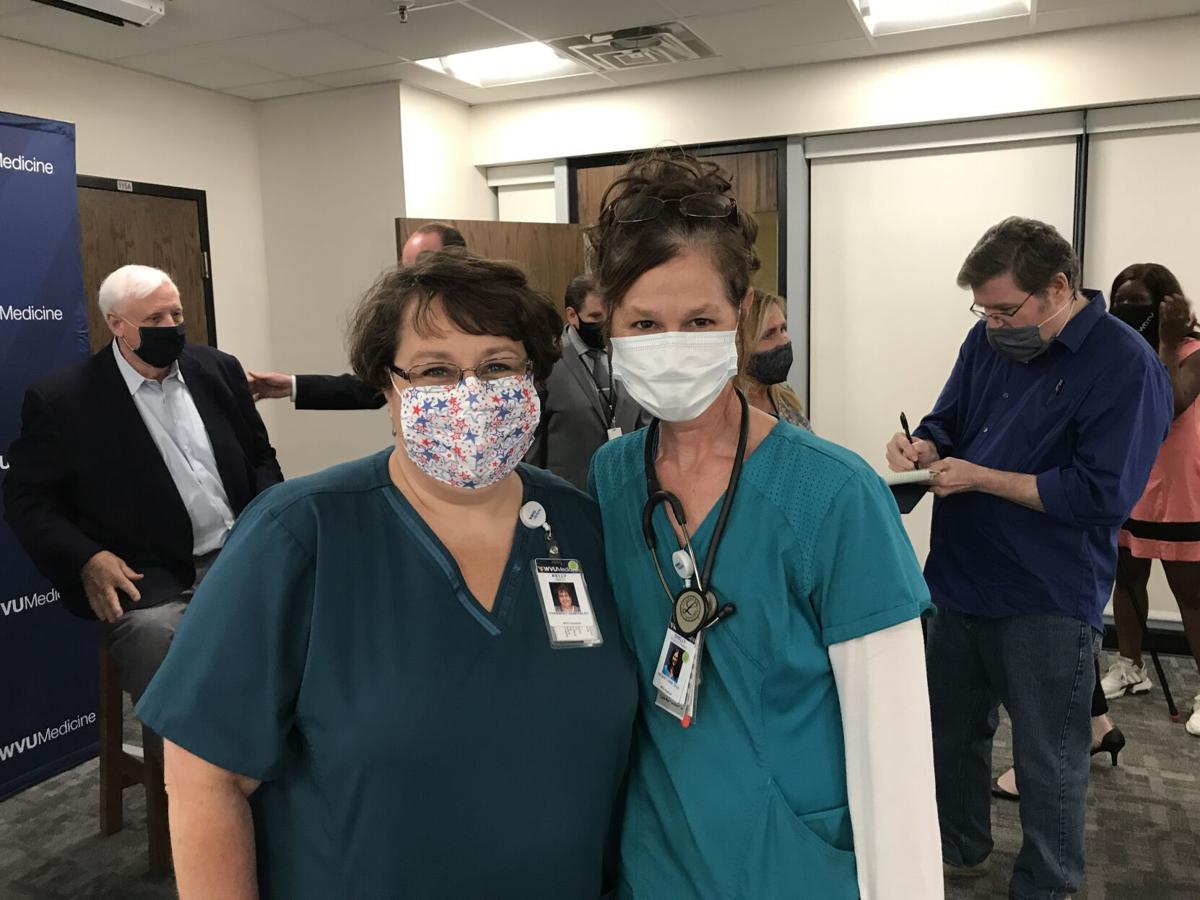 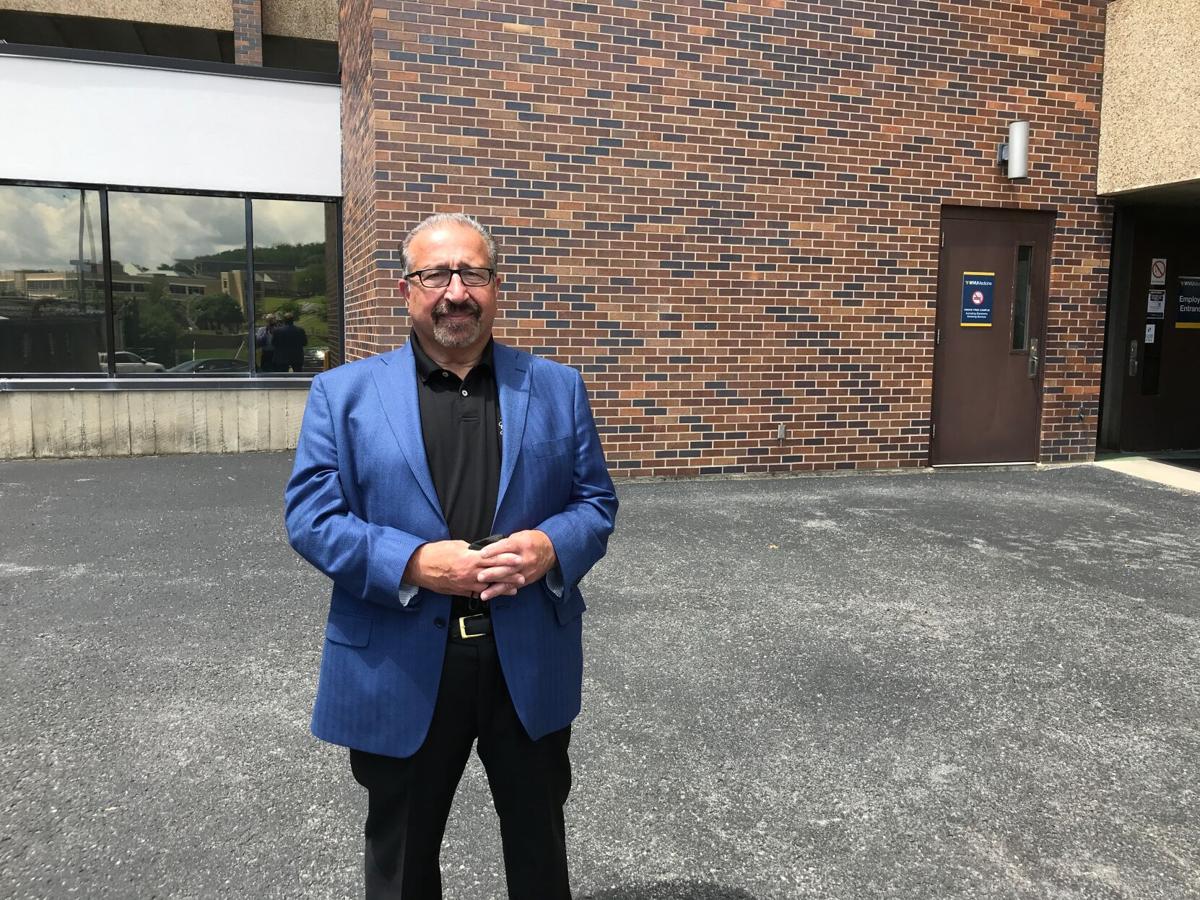 WVU lobbyist Larry Puccio, 65, of Fairmont, was a key player in bringing Gov. Jim Justice on board with WVU Medicine to ensure the city has its own hospital. 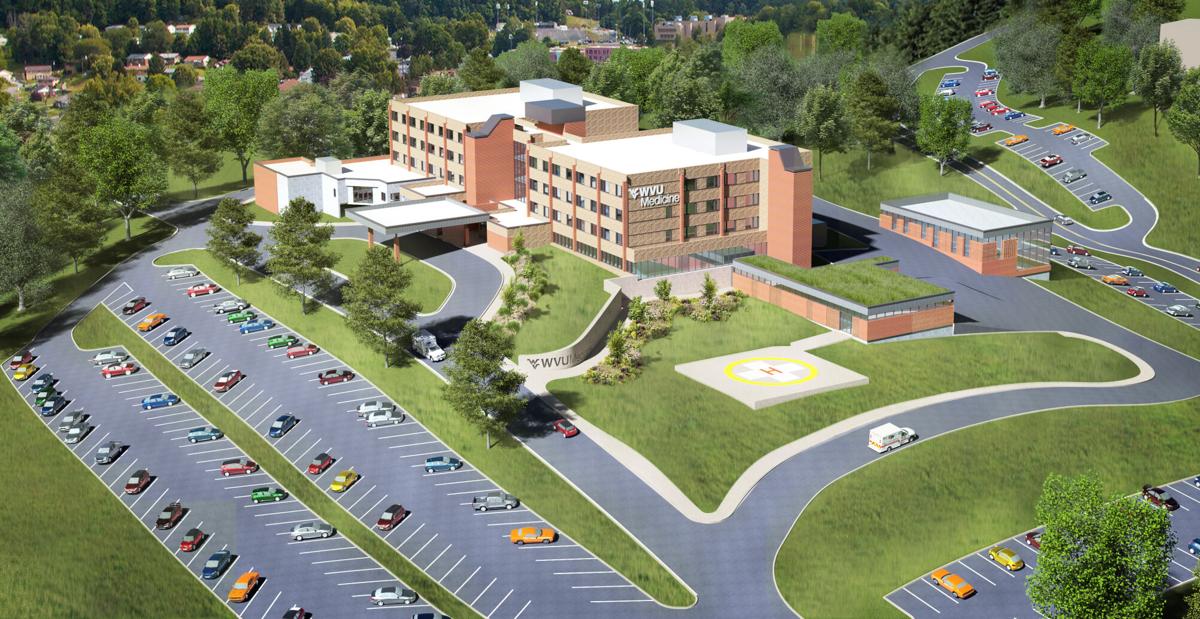 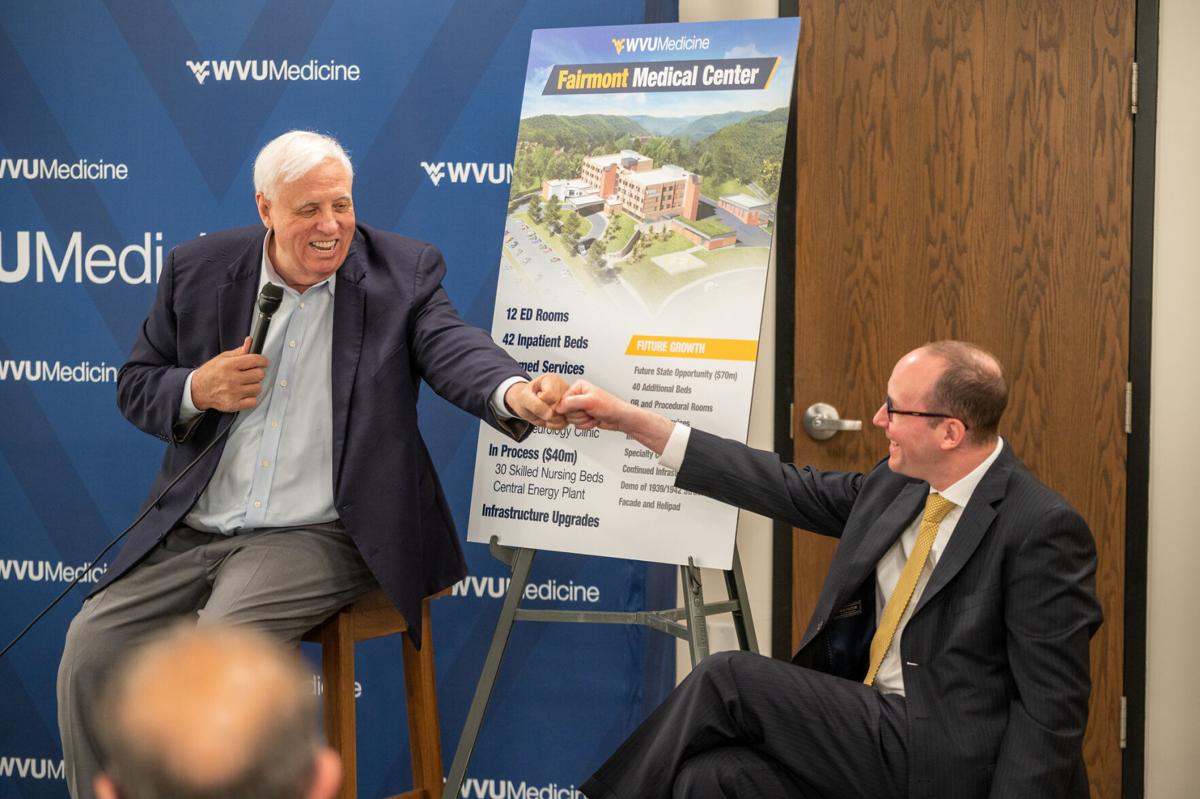 WVU lobbyist Larry Puccio, 65, of Fairmont, was a key player in bringing Gov. Jim Justice on board with WVU Medicine to ensure the city has its own hospital.

FAIRMONT — In her 23-year career as a hospital pharmacist, Kelly Smith endured what she describes as a rollercoaster ride at different times.

When she was pharmacist at then-Fairmont General Hospital, Smith, her coworkers and the community took a deep breath as the hospital’s top three leaders — CEO, CFO, vice president of human resources — resigned in 2013. Then came the heavy stuff — Chapter 11 bankruptcy and a restructuring team appointed by the federal courts.

New hope came along in June 2014 when Irvine, California-based Alecto Healthcare Services LLC announced it was buying the hospital and changing its name to Fairmont Regional Medical Center.

However, the hospital continued to lose revenue under Alecto’s ownership until it all finally unraveled in the fall of 2019. Alecto officials issued a press release on Aug. 14, 2019 stating that Fairmont Regional would stay open. Company brass wanted to calm the Fairmont community’s fears after news spread that Alecto was going to close Ohio Valley Medical Center in Wheeling on Sept. 3, 2019 and nearby “sister hospital” East Ohio Regional Hospital in Martins Ferry on Oct. 7, 2019.

A month later, in September 2019, Michael Sarrao, executive vice president for FRMC and Alecto, announced 25 employees were laid off as “part of an overall effort to become more efficient at Fairmont Regional Medical Center.”

Five months later, on Feb. 28, 2020, the community’s darkest fears came true. Alecto presented its 528 employees at Fairmont Regional Medical Center with letters that stated the facility would be shut down in 60 days citing losses of more than $19 million during the previous three years and the inability to find a buyer for the facility.

Smith was devastated despite knowing the move was coming because she was part of the hospital management team.

“I never expected that I wouldn’t have a job; that we wouldn’t be able to have health care, so it was total devastation. And I was a director of pharmacy prior, so I was part of management, so I knew a lot of information and I kind of had hope but it didn’t work out unfortunately,” said Smith. “Emotions were all over the place and it was a very confusing time, very frustrating and going into COVID too. You know, your like ‘How can you close a health care system down when we have a pandemic.’”

Smith returned to the Locust Avenue campus of WVU Medicine’s Fairmont Medical Center when it opened June 30, 2020. She describes the work environment as a family and said it’s hard to believe it’s almost been a year since the hospital was reopened by WVU.

“This is real. It’s finally kicked in. I said I didn’t realize that I probably was depressed, going through those emotions, until probably August [2020]. I think it took me until August when I finally realized, ‘Yeah, this is going to stick around and yeah, we’re going to be OK,’ Smith said, smiling. “I’m so excited about what’s to come and what we’re going to have.”

On Friday, Smith and a number of her coworkers joined WVU Medicine President and CEO Albert Wright Jr. and Gov. Jim Justice as they announced the newest chapter in the life of Fairmont’s hospital.

Wright unveiled a $110 million, multi-year expansion and rebuilding project at the campus on Locust Avenue that includes adding new operating rooms, 40 new in-patient beds and other upgrades. The first thing to be developed is a new central energy plant to install new boilers and chillers for the campus. WVU Medicine also will add 30 skilled nursing beds for which it already has been granted a certificate of need from the state.

“We had to figure out, this is a very old building, this is a hospital that struggled for years. The original nonprofit ... hospital went bankrupt back in the early 2010s, the Alecto company came in and ran it, struggled for a number of years and there was a lot of deferred maintenance in this building,” Wright said.

Wright and Justice, on March 13, 2020, announced a plan to build a new 10-bed hospital at its property off the Gateway Connector where it has a 25,000 square foot outpatient center, while using the Locust Avenue facility temporarily until construction was completed. However, WVU Medicine never turned a shovel of dirt at the site, and after more research, Wright scrapped that plan and decided to reinvest on Locust Avenue.

“The first thing that became evident to me is, one is there is a need for a large comprehensive hospital in this community and ... so once you make that decision, then two, it really becomes, ‘Do you stay here or do you build a new building,” Wright said. “We decided it’s going to take a ton of work.”

Wright said the structure on Locust Avenue is a great building with a great number of great stories, but it would be too costly simply to repair it. He called it a “fixer-upper.”

“We’re going to rebuild this hospital in place and it’s going to be something that goes over the next five years or so,” Wright said.

Wright said if WVU Medicine built the same size facility somewhere else, it would probably cost twice as much. Plans call for demolishing the structures on Locust Avenue that date back to the late 1930s and early 1940s.

“The second thing is, this is really right in the core of Fairmont and Marion County. It serves the entire region, it’s right by Fairmont State University, so this is the right decision and the right thing to do, so we’re excited to come to this point,” Wright said.

Wright said the hospital currently sees an average of 55 patients a day in the emergency department, a number he expects to increase as the COVID-19 pandemic winds down and people are out and about enjoying activities.

“Remember, WVU Medicine is the academic health system and land-grant university of the state of West Virginia and we have certain treatment protocol standards and we also have facility standards, so it’s going to take a while to get this building up to where we want it to be. But, long term, we didn’t want to commit to this until we knew we could do it in a fashion that we’d all be proud,” Wright said.

WVU lobbyist Larry Puccio, 65, was born in Fairmont General Hospital. When Alecto made its closure announcement in early 2020, he picked up the phone and called Gov. Jim Justice. Having served as head of Justice’s transition team, he figured he could plead the case to the governor for helping keep the Fairmont hospital open and serving his hometown.

“So, when we were getting ready to lose this hospital, I sat down with the governor and just shared with him how important I thought it was to keep a hospital here and then he went to work and I attended meetings with him and he went to work on talking about different options to save this hospital and give quality health care to this community,” Puccio said.

He said his role at Friday’s press event was that of a concerned citizen who is simply excited to have health care back in the heart of Marion County. Puccio said the WVU Medicine expansion is the culmination of research and planning that allowed Wright and his team to craft a strategy to make the hospital successful.

“The truth of the matter is, it was a matter of doing the due diligence and coming up with a good quality plan that could provide the health services that we need — and the jobs — that Marion County so deserves. We deserve quality health care. We’re heavily populated with seniors. Those seniors have paid their taxes and worked all their lives and are in an important part of their life to have health care. I think it’s important to be able to offer them that and I think now we can be happy to say that this facility is offering them that care,” Puccio said.

Meanwhile, Justice said the community deserves the credit for saving the local hospital. However, Justice also said he’s “pretty good” at knowing when a project has a chance of being successful or failing.

“When the people, really, really have passion and conviction that they can make it go ... you deserve so much credit. You really do,” Justice said. “You saved a hospital. WVU surely saved the hospital. I’m surely a part of that, but maybe just only a pebble of the sand.

“I believed because you believed,” Justice said.

Justice thanked Puccio for bringing the hospital closure to his attention.

Puccio echoed Wright’s reference to the proximity to Fairmont State University and being able to serve the heart of the community at the Locust Avenue site as one aspect that makes the expansion project exciting.

“And then you look at this part of the county that, without a quality medical facility here, I don’t know what would have happened to this building. And you know what ends up happening when you let a building set and this is just a part of our community and a part of Marion County that I didn’t think that we could allow to deteriorate because when it starts deteriorating, everything around it starts deteriorating,” Puccio said.

Patient care technician Shelly Postlethwait worked at Fairmont Regional Medical Center for four years before she was laid off last year and later rehired when WVU Medicine took over the building last year. She was there Friday to applaud the expansion announcement.

“It’s amazing. Everybody is so happy. It’s like a family coming back together, so I’m glad to be a part of it. They’re family-oriented, definitely,” Postlethwait said.

She said the expansion is the right decision for Marion County “because it’ll keep the people to stay in Marion County. I know a lot of people were concerned about the hospital closing; they were really sad and now they know it’s going to be here bigger than ever, so it’s a wonderful opportunity.”

“This is real. It’s finally kicked in."