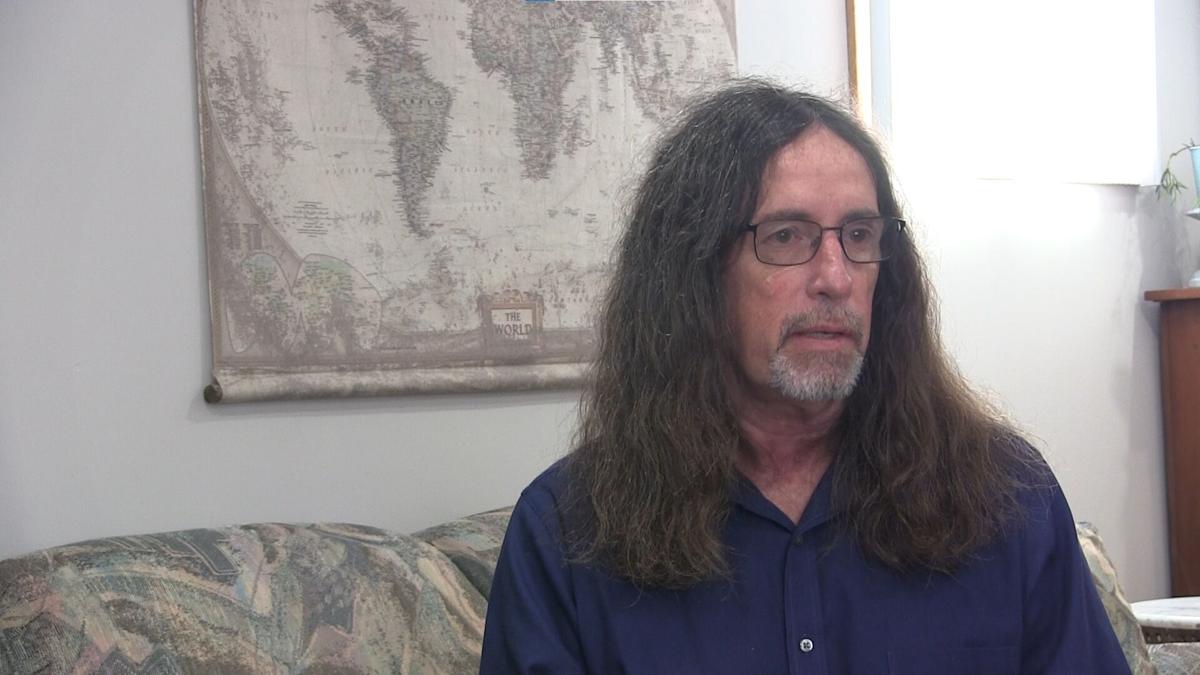 Jim Nolan, chair of the West Virginia University Department of Sociology, member of the Fairmont Human Rights Commission. Before entering higher education, Nolan served as 13 years as a police officer in Delaware. 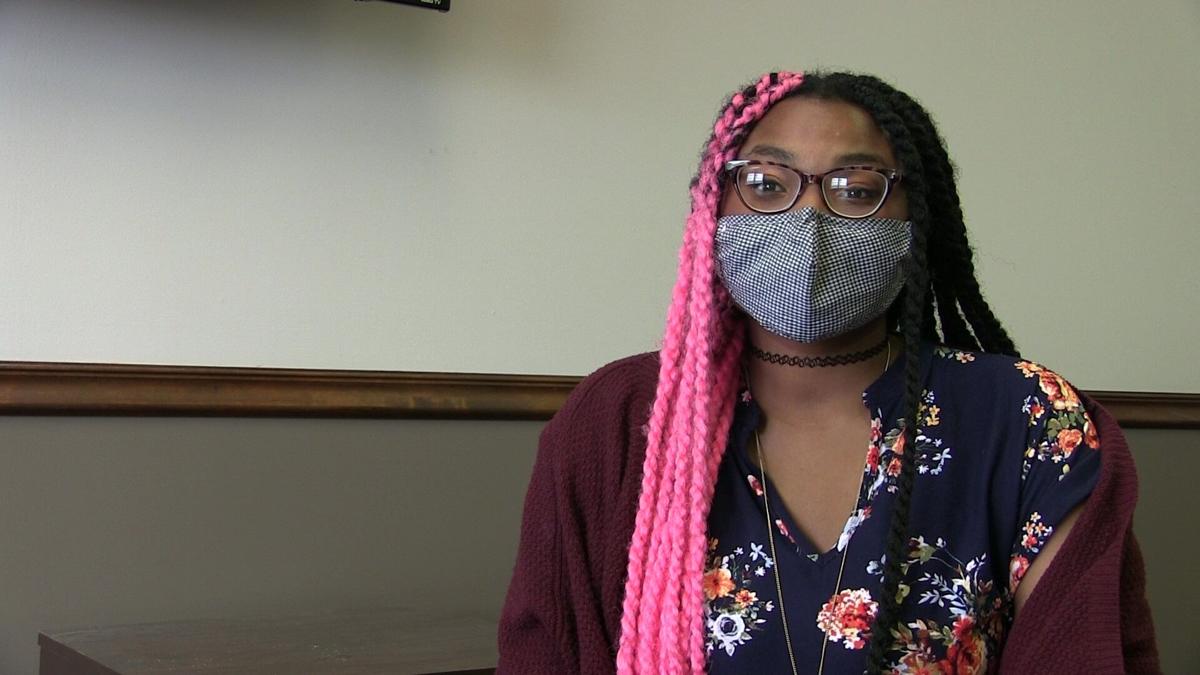 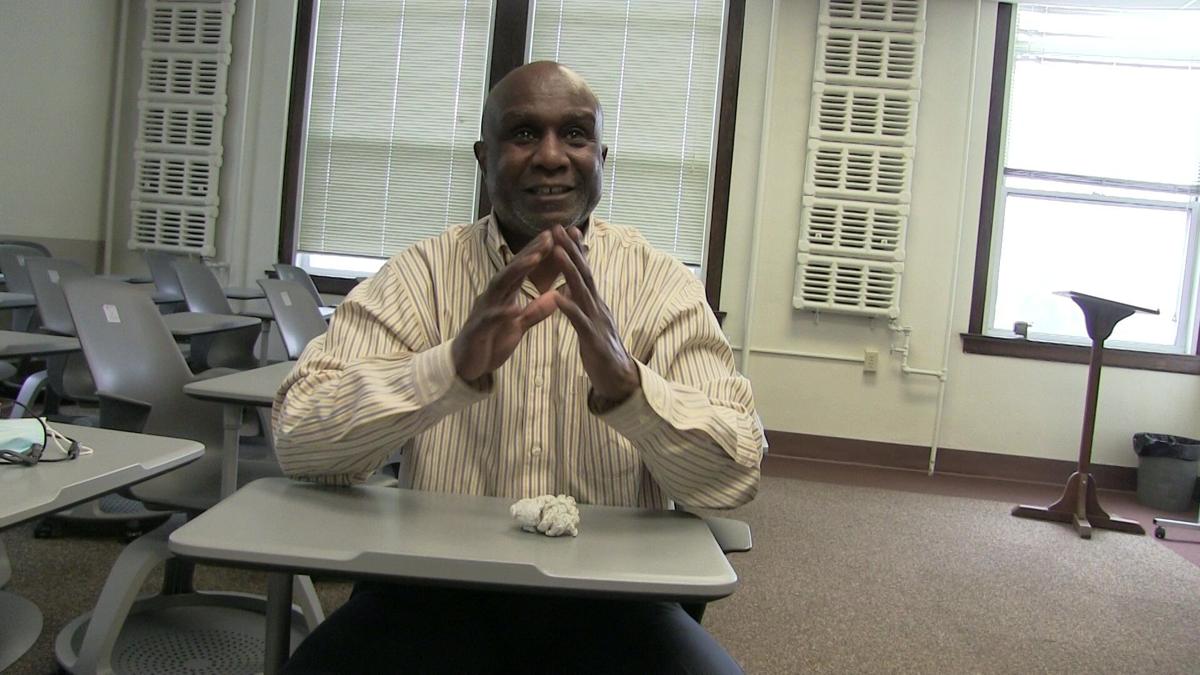 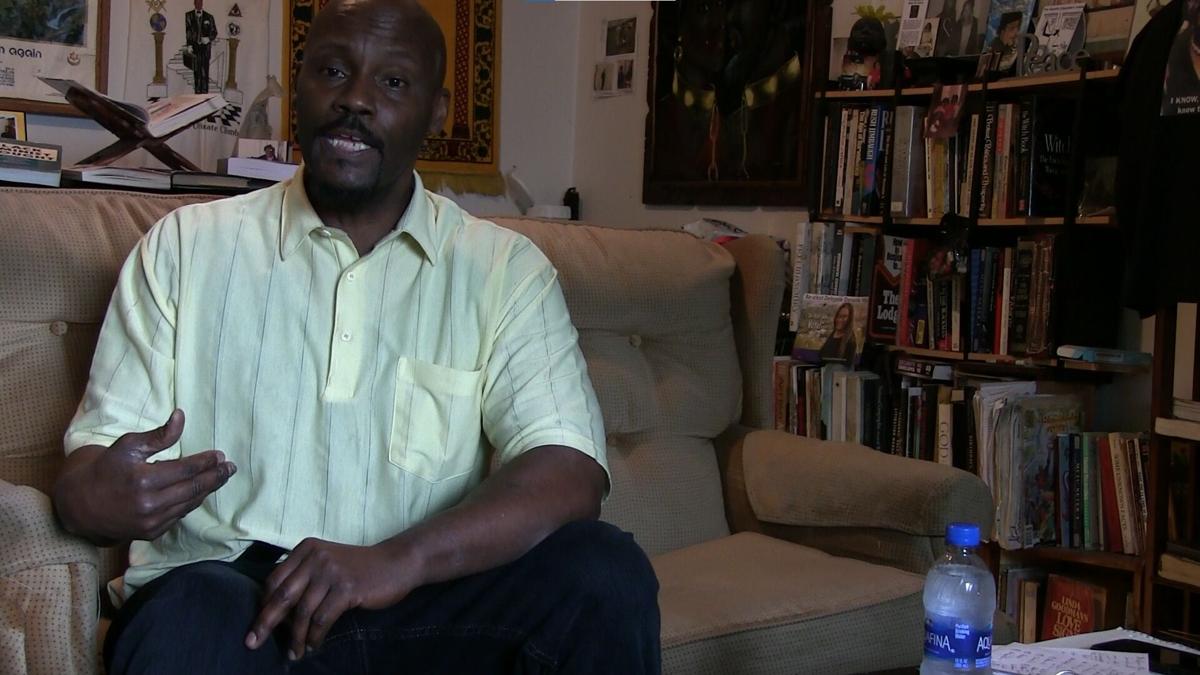 John Shabazz, of Morgantown, is chair of the West Virginia Black Unity Coalition and organizer of the Upper Monongahela Juneteenth celebration. 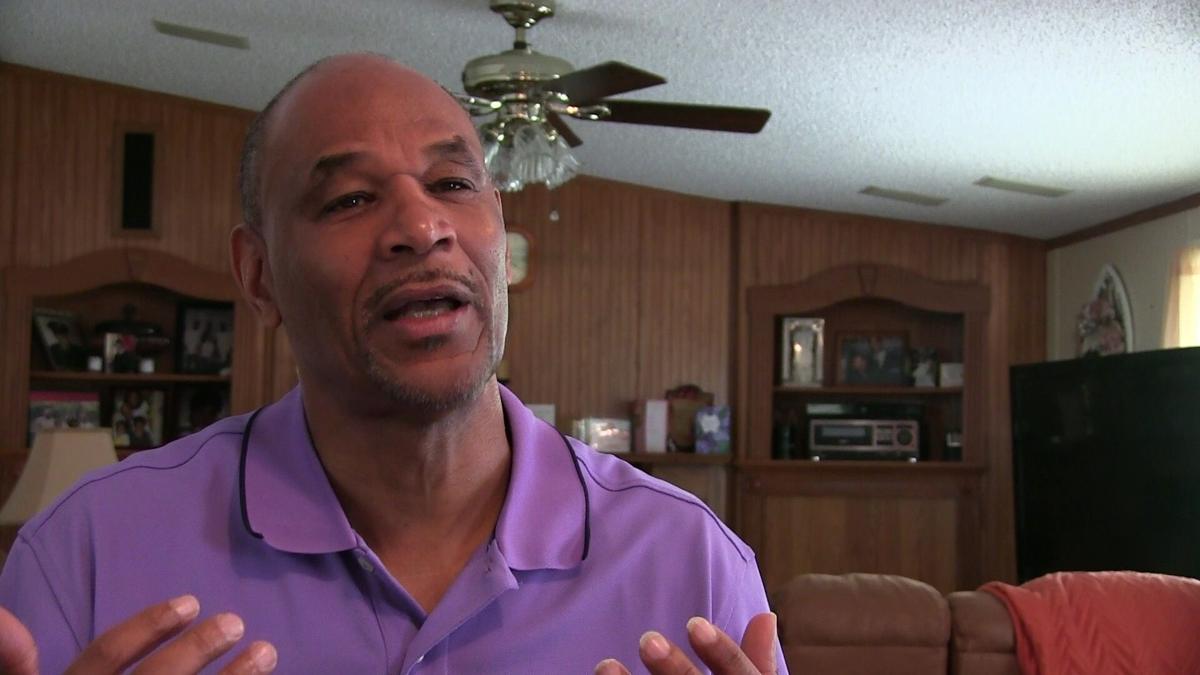 Mike Little, pastor of Good Hope Baptist Church in Barrackville and a member of the Fairmont Pastoral Alliance. 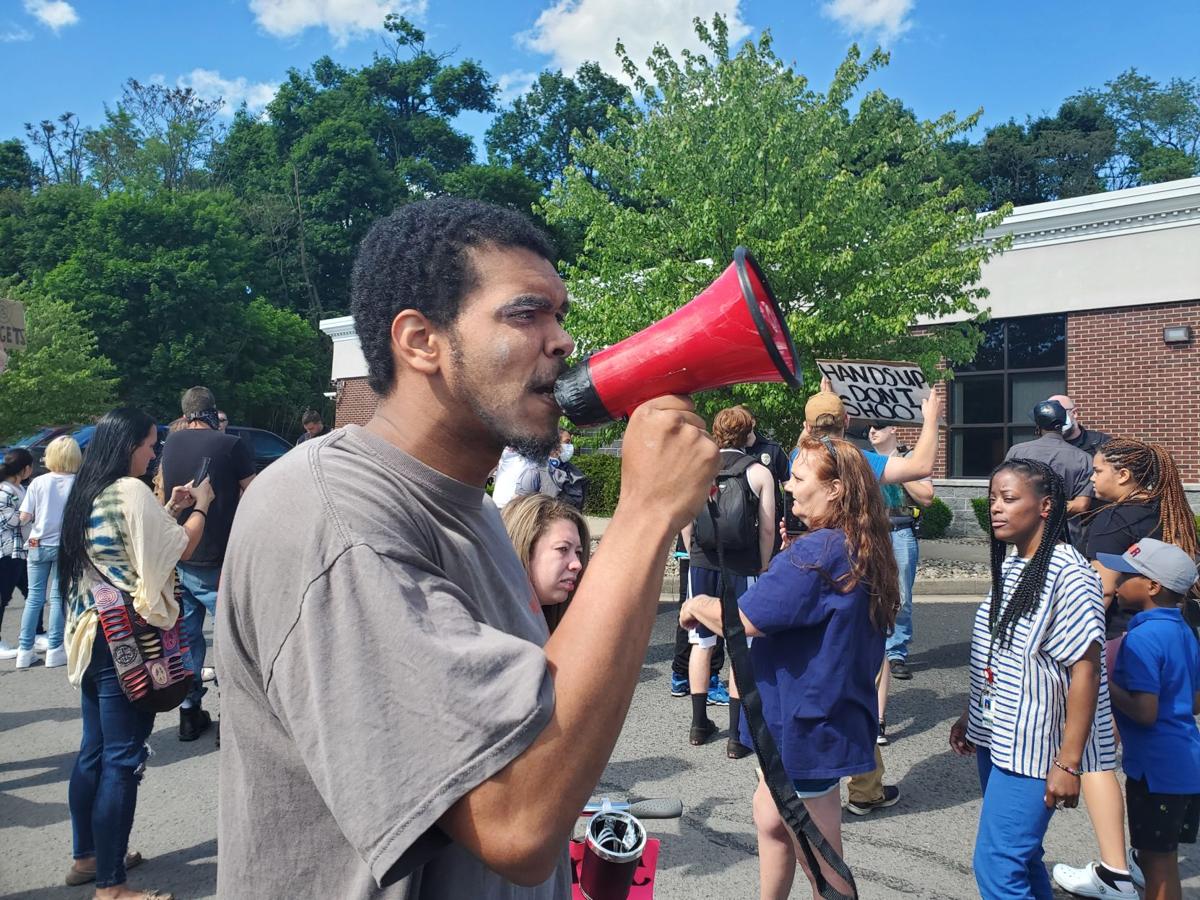 Demetrius Mitchell rallies the crowd of protesters at the Fairmont Public Safety Building, still with mace residue on his face after marching in June 2020. 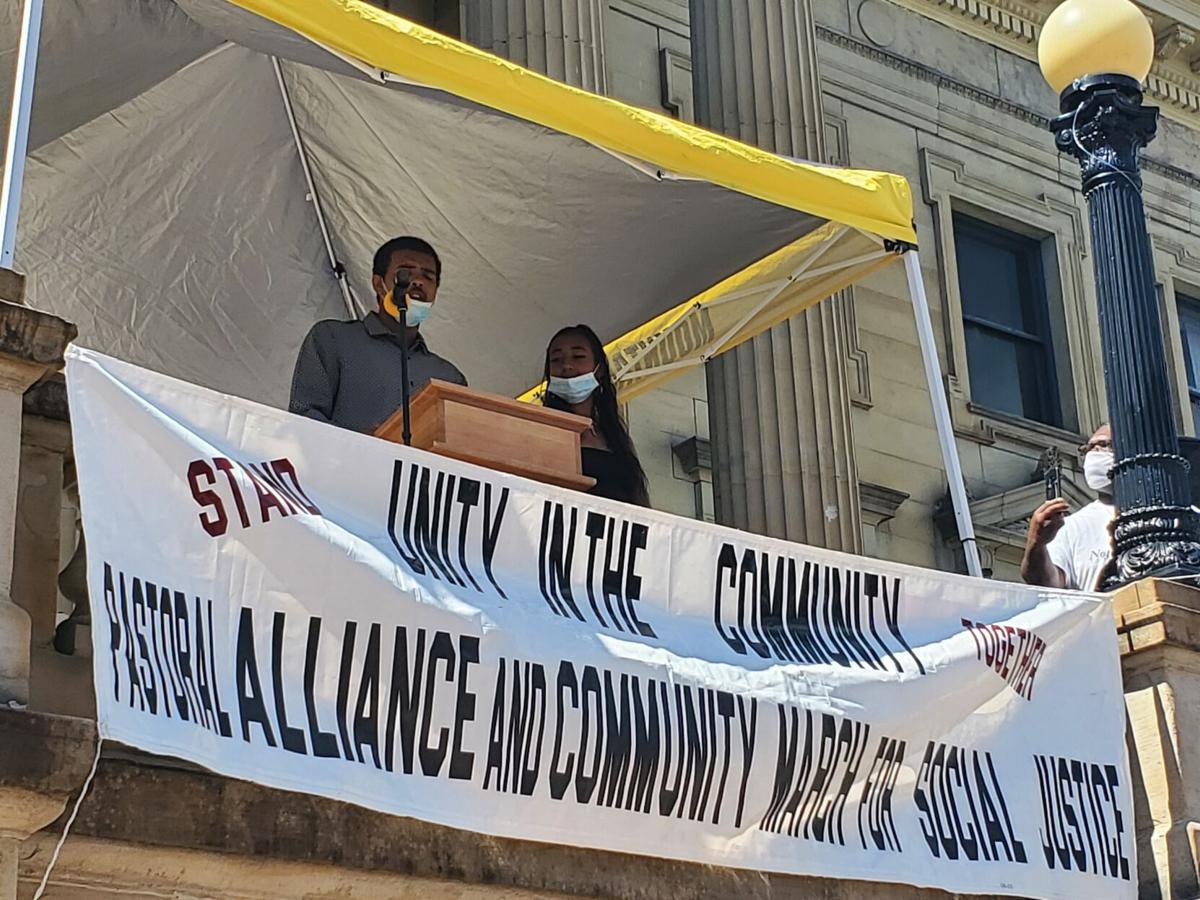 Demetrius Mitchell, left, and Hydia George speak to the crowd gathered at the Marion County Courthouse, as Mitchell recites portions of Rev. Dr. Martin Luther King Jr.’s “I Have a Dream" speech in June 2020.

Demetrius Mitchell rallies the crowd of protesters at the Fairmont Public Safety Building, still with mace residue on his face after marching in June 2020.

Demetrius Mitchell, left, and Hydia George speak to the crowd gathered at the Marion County Courthouse, as Mitchell recites portions of Rev. Dr. Martin Luther King Jr.’s “I Have a Dream" speech in June 2020.

A year after the world watched Minneapolis resident George Floyd suffocate under the knee of former police officer Derek Chauvin, many hope a change is about to take place in policing, while others remain skeptical.

On May 25, 2020, Chauvin knelt on Floyd’s neck for more than 9 minutes causing him to suffocate while a nearby teen used her smartphone to video the atrocity.

A year has passed, filled with worldwide heartache and protests for justice and accountability. Marchers took to the streets of Fairmont for five days after the video of Floyd’s death spread across media and internet channels.

Eleven months later, on April 20, 2021, a jury convicted Chauvin of second-degree unintentional murder, third-degree murder and second-degree manslaughter. However, many advocates say this is only the start of true justice. The real changes must occur within the law enforcement system.

“I think this verdict is a wake up call for police reform,” said Fairmont resident Jim Nolan, a former police officer and current chair of the Sociology Department at West Virginia University. “We need to think about new ways of doing policing.”

Nolan, who is also a member of the Fairmont Human Rights Commission, served as a Delaware police officer for 13 years before entering teaching. He said he and other officers were trained to make arrests and conduct investigations, because that’s what makes a “good police officer.” The metric of success, according to Nolan, is how many arrests an officer makes.

“When I saw the video that everybody saw, before I recognized [Floyd] was going to die, I recognized this as routine police practice,” Nolan said. “This is what the police do, any sort of resistance is going to lead to physical constraint.”

As Nolan sees it, the system is designed to escalate situations.

“If I tell you you’re under arrest and grab you and you pull away, this is an act of resistance,” Nolan said. “It opens the opportunity for the police to use violence and take you down quickly. George Floyd was on the ground when I saw the video and everything looked routine.”

It’s that so-called normal that Nolan and others in law enforcement believes needs to change.

“My instinct at the present moment is that the police are geared up to fight against any sort of significant changes,” Nolan said.

In the eyes of the police force, it’s likely Chauvin was considered to be what a police officer should be.

“If you’re playing football... and someone comes after you and you tackle them, no one is going to ask, ‘Why did you tackle that guy?’ Because that’s the game we’re playing,” Nolan said. “Derek Chauvin’s mindset didn’t originate in him. That mindset comes up from the law enforcement game.”

Nolan’s calls for change may sound far off, but others see the slow progress happening already.

“To me, the verdict is extremely telling that there is some progress going on,” said Kianna Wills, a Black student majoring in studio art at Fairmont State University.

Due to asthma, Wills wasn’t able to march in Fairmont last summer during the pandemic, but she was as vigilant as the marchers in the streets.

“[The police] are starting to speak up and hold themselves accountable, morally and ethically,” Wills said. “Most everyone in [the Floyd] situation recognized that it was really messed up, including [Chauvin’s] partners.”

Wills believes that if police were trained better, these sorts of situations would never happen.

“No one caused [Chauvin] to do that, no one forced him to hold his knee on [Floyd’s] neck like that,” Wills said.

According to organizations such as Black Lives Matter, there are still many police officers who must be held accountable like Chauvin.

“More trials like the Chauvin trial need to happen,” Wills said. “More cops need to be held accountable and made an example of. It needs to be shown that people are taking it seriously.”

Both Nolan and Wills believe the current system of policing does not allow officers to hold each other accountable.

“Just because things are how they are institutionally, like cops don’t hold each other accountable like that,” Wills said. “That’s the old system, and things are changing and they need to change in a way that is not cops just covering their own backs.”

Former Fairmont mayor Greg Hinton, a 71-year-old attorney and professor of business law at Fairmont State, said a lot of people are angry, and because of that anger, the attention has shifted toward change.

“It started a movement. Something that was long overdue. But, I think, although it was tragic, a lot of good has come out of it,” said Hinton, who is Black.

Hinton pointed to Chauvin casually crushing Floyd’s neck as a point of outrage.

“He was very casual. Everybody’s seen the video. He had his hands in his pockets and he just casually with a knee on this man’s neck,” Hinton said.

As Nolan pointed out, this sort of police work is routine and it’s no wonder Chauvin was as casual as Hinton described.

“Why could a man do what he did in broad daylight with other people standing there watching him do it and nobody did anything about it?,” Hinton said.

Hinton compared the racial climate in the U.S. today to the civil rights movement.

John Shabazz, of Morgantown, is the national chairman of the WVU Black Unity Coalition and has organized the Upper Monongahela Juneteeth Celebration since 2011. Shabazz said he has closely followed the Black experience in West Virginia, and as he sees it, the situation involving Floyd’s death is nothing new.

“It brings policing under a microscope because the fact that that just didn’t happen with George Floyd,” Shabazz said. “That happened with so many others. If it had only been one or two maybe we could sit down and negotiate.”

Shabazz says that if the Floyd murder wasn’t filmed, he doesn’t think that Chauvin would have been convicted at all.

“Inherently, by me being a Black man, I see a law enforcement officer as an extension of the slave patrols,” Shabazz said. “I would be surprised if Derek Chauvin makes it through prison. He’s got to go and be around some of the same Black men that might have watched that.”

But despite all the bad that has surfaced because of this trial and murder, Pastor Mike Little, of Good Hope Baptist Church in Barrackville, and a member of the Fairmont Pastoral Alliance, said he has seen good things alongside the bad. The Alliance was formed primarily by a group of Black pastors after the local Floyd marches appeared to get out of hand and came across as anti-police.

“I’ve had the [Fairmont] chief of police in my home to sit down and talk about these issues,” Little said.

A major purpose of the meeting was in an effort to mend some misunderstandings between police and people of color. However, the Alliance has also been working to get the Fairmont Police Department to end the use of chokeholds and no-knock warrants. No decision has been made to date on the use of either tactic.

“I wanted to make sure that, for one, people of color understand that not all policemen are bad,” Little said. “But also from the police standpoint that when they see a person of color they realize that they’re not all bad.”

Little hopes to bridge what he describes as a gap of misunderstanding. As he sees it, human beings seem to find more reasons to hate than to love.

In spite of the good he’s seen, Little still believes it was appropriate that Floyd’s death was categorized as a murder.

“The whole world saw what we considered murder,” Little said. “I think we’ve gotten to a point where people, white, Black, whatever, understand that this country is evolving.”

Little considers this evolution a good thing, however, the issue is that it’s being met with outdated solutions.

“The old mindset is to keep it the same and not allow it to evolve,” Little said. “That’s what needs to change.

“We saw something that should not happen in the United States of America to any human being. Mr. Chauvin made a huge mistake. But why he did it — why he thought it was OK — that’s what troubles me.

Little said outdated police tactics and overuse of force harm everyone, regardless of race.

“Why after five minutes, after six minutes, after seven minutes he showed no sympathy. That is challenging. Those are the types of things that keep us as a people — as a nation — handcuffed.”