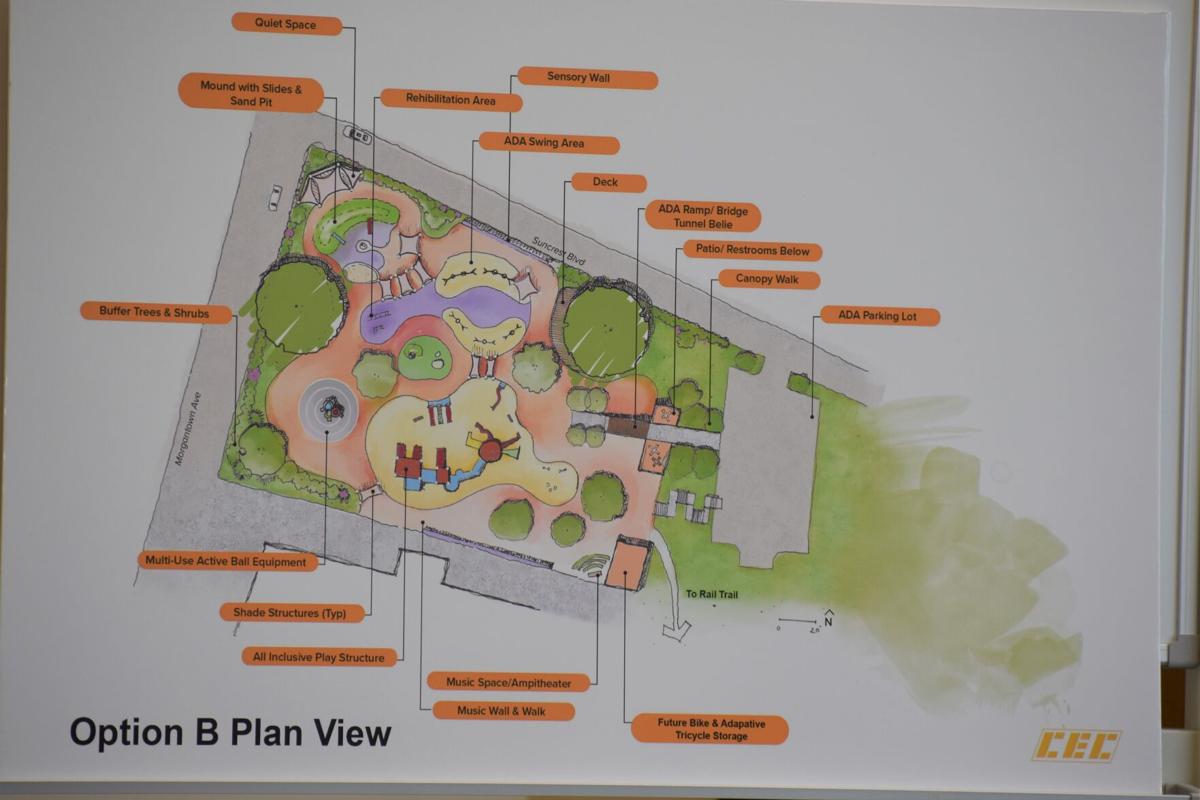 Jim Cristie of Civil & Environmental Consultants, of Bridgeport, unveiled this rendering for the new, all-inclusive Norwood Park in May. 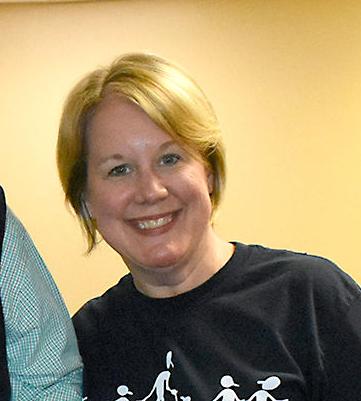 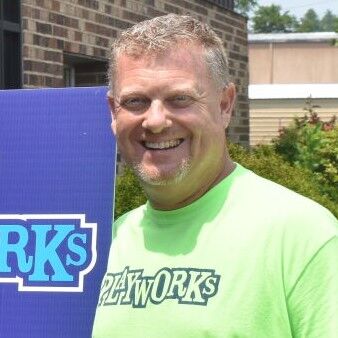 FAIRMONT — The transformation of Norwood Park in East Side will reach a crucial step this week.

On Tuesday, the City of Fairmont will hold a public hearing at the Public Safety Building from 4:30 p.m. till 6:30 p.m. to gather the community’s ideas and input on the Norwood Park project. Current plans call for the park to be transformed into an inclusive park, allowing anyone of any age and ability to play together in one space.

In 2017, the Fairmont Parks Commission made plans to “revitalize” many parks in the city. On their radar was Norwood Park, a small playground on East Side with not much going for it, but the location and property has much potential. The park sits at the corner of Morgantown Avenue and Suncrest Boulevard in proximity to Victory Baptist Church.

The commission continued to set plans for the park over the next year and in the fall of 2019 announced that Norwood Park would become all-inclusive. The commission voted and approved the decision to redevelop the location.

In May, the city’s parks commission met around the topic of Norwood Park again to catch up on the progress of the project. At the meeting, the commission was joined by Jim Christie of Civil & Environmental Consultants, a landscape architect and project manager, who led a discussion about the Norwood project.

At the meeting in May, Christie unveiled a conceptual rendering for the new Norwood Park. The commission was pleased with the progress CEC and Christie made. Norwood Park is next door to property owned by the Fairmont location of Novelis, which pledged to match up to $75,000 to fund the purchase of playground equipment. The company will also provide volunteers who will work on the park renovation project.

“What we’ve done is we’ve included other groups to be all inclusive,” Christie said at the May meeting. “The Disability Action Center is a big part of this, PlayWorks out of Morgantown, Messenger Speech Therapy, WVU Music Therapy and the Challenger League.”

Too often with projects like these, the planners and architects will avoid counsel with the community members who are affected by their project, but CEC approached those who stand to gain the most from the new inclusive park. Many organizations, such as the DAC and PlayWorks, who work with disabled individuals had direct input into the project.

“CEC has done an amazing job with the concept,” said Julie Sole, director of the DAC. “We gave [CEC] a lot of ideas when it was time to come up with a design and CEC really hit it out of the ballpark.”

The concept for Norwood Park goes far beyond the usual playground. The concept includes sensory spaces, communication walls, totally accessible for residents who experience different forms of mobility and an integration of the inclusive elements, rather than making them an addition.

“Those are the components we were looking for — unique, safe, accessible and inclusive,” Sole said. “For that, their initial concept is fantastic.”

While most parks are have ADA compliant elements, such elements are usually an afterthought. A park will have a swing set, then, off to the side, sits a lone wheelchair swing.

“We want inclusion to be a natural process, not a forced process,” said Mike Lentz, owner of PlayWorks. “It’s not really inclusion if it’s forced. By making these parks [inclusive] from the beginning, the inclusion is natural and that’s what every parents want for their children... they want it easy for their kids.”

This inclusive park looks to have those elements integrated putting everyone playing at the same level.

And these interactions are healthy, not just for those with special needs, but for the education of all the parties involved.

“This will really foster an inclusion,” Lentz said. “You can’t just call something inclusive and hope that it works, you have to build it from the inside out.”

This park will not be for just children, but for anyone of any age. Typically, playground equipment isn’t made to support a full-sized adult, however, plans call for the equipment in this new park to be specifically designed to accommodate adults.

“We wanted to take the size and weight of individuals into consideration and how everyone can have access to all the areas of the park,” Sole said. “There’s not going to be an area for those with special needs and an area for people without developmental disabilities — it’s just all there together.

“That’s the way the world should be.”

Questions or suggestions about the Norwood project should be sent to Hanna Turner, marketing and communications manager for the City of Fairmont, at hturner@fairmontwv.gov.