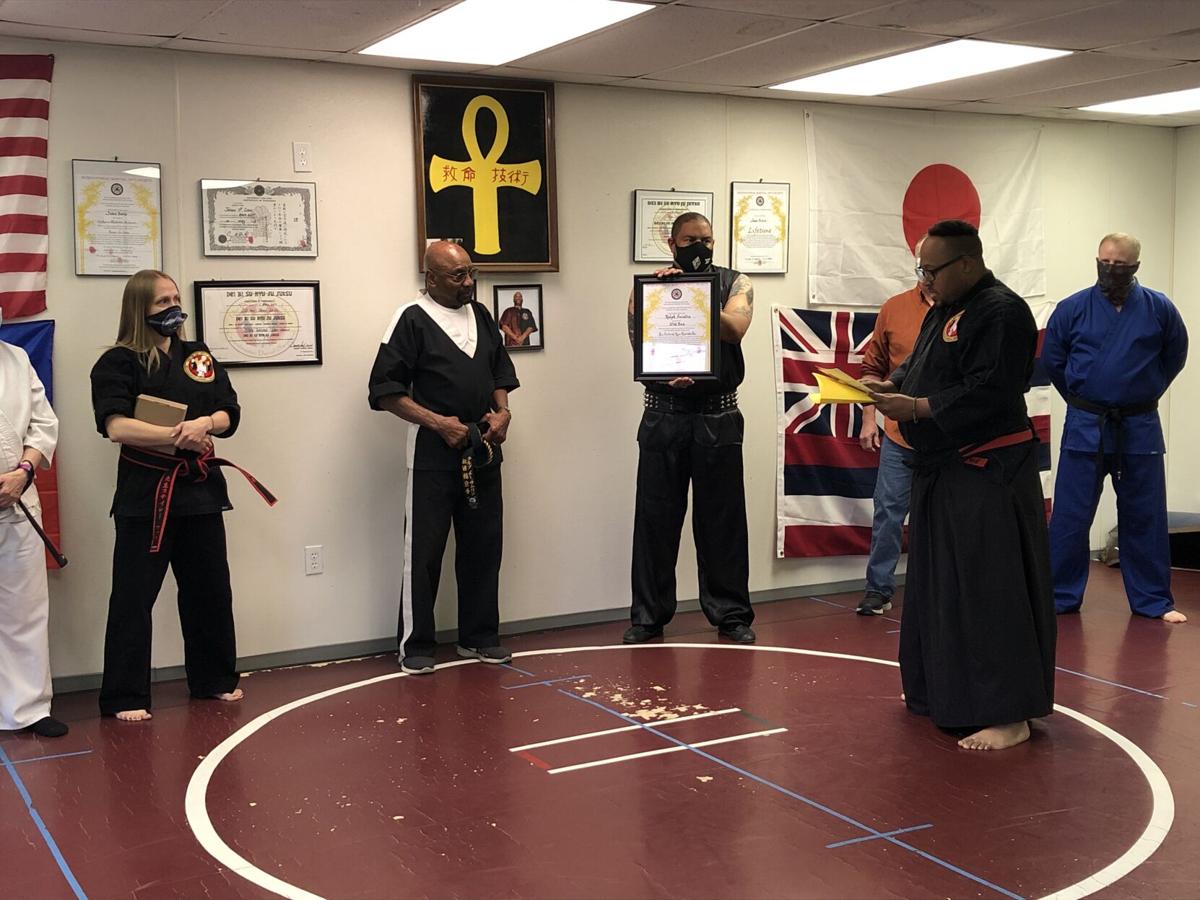 Ralph Sumlin, second from left, is presented with his award for reaching the 10th degree black belt as well as his own karate style at Kyumei ju jitsu on April 16 while Jason David reads from his plaque. 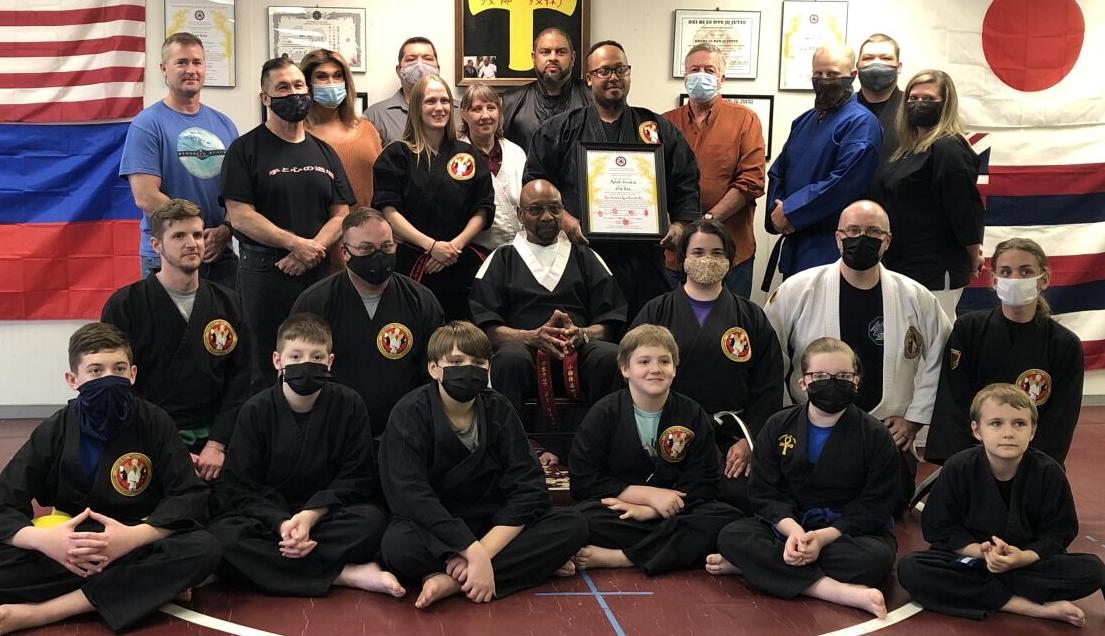 Ralph Sumlin, center second row from front, poses with the students of Kyumei ju jitsu after receiving an award for 10th degree black belt and recognition of his own karate style. 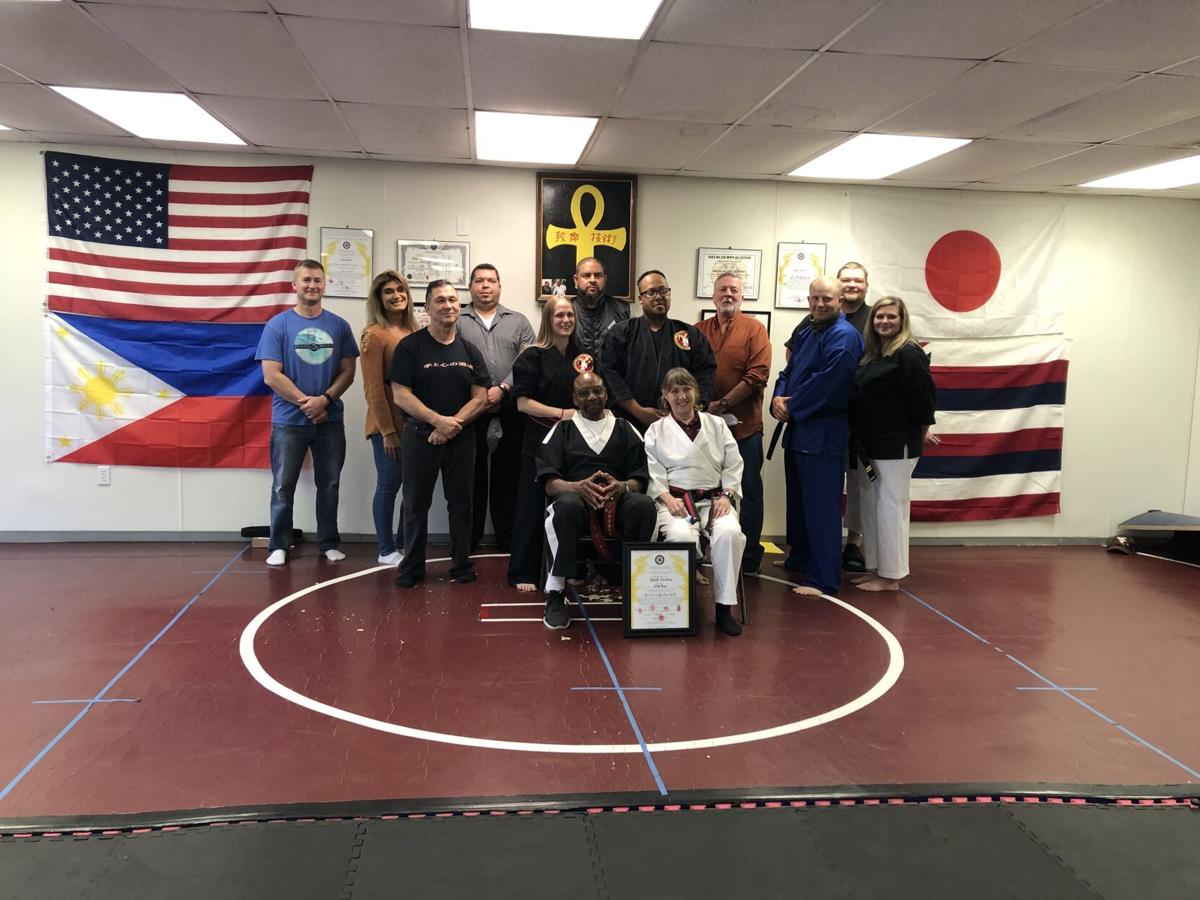 Winnie Sliger, front row in white, who will carry on the lineage of Sumlin’s karate style poses with Sumlin and students at Kyumei ju jitsu.

Ralph Sumlin, second from left, is presented with his award for reaching the 10th degree black belt as well as his own karate style at Kyumei ju jitsu on April 16 while Jason David reads from his plaque.

Ralph Sumlin, center second row from front, poses with the students of Kyumei ju jitsu after receiving an award for 10th degree black belt and recognition of his own karate style.

Winnie Sliger, front row in white, who will carry on the lineage of Sumlin’s karate style poses with Sumlin and students at Kyumei ju jitsu.

As a child, Ralph Sumlin was too small, too short and too skinny for most sports.

The Fairmont resident said the only thing he could find that he could enjoy was karate. Sumlin was recently awarded his 10th degree black belt as well as the recognition for developing his own style of martial arts, an honor that was met with tearful acceptance.

Sumlin’s peers presented him a framed certificate from the International Martial Arts Society stating he must carry on the lineage of Ko Sutemi Ryu Karate Do. Sumlin received his award at martial arts studio Kyumei Ju Jitsu in Fairmont.

Sumlin first got involved in martial arts one day when he was in Pittsburgh. He said he saw a school and found interest in the sport he loves.

“The main thing is with being an instructor is I want to try to teach the kids and young people that there’s more to life than drugs. I always try to help everybody,” he said.

Having his own system of martial arts was never his goal. But, he was in class one day and had a great instructor who told him, “Ralph, you got it,” and that’s when teaching started to become something Sumlin also enjoyed.

He’s been teaching martial arts for around 55 years. He said gaining the recognition of his own style was kept a secret until the April 16 ceremony.

“The only thing that I would try to do is let everybody I taught I want them to do their best and let them know the way that I came up and do the same thing if they want to,” said Sumlin.

He said it takes a lot of discipline to get to the point of being a 10th degree black belt. He said really what he likes to do is practice what you preach.

“If you see wrong, I can’t be doing wrong and by that it’s easy when you see someone or something that you know is going wrong and you can get in there and correct it,” said Sumlin.

Even though Sumlin is someone who can throw a punch, he said he likes to keep things peaceful. He said anytime someone gets in a confrontation, it doesn’t need to escalate.

“I still say, I tell them all, the best man is the man that walks away, and if you can talk it out that’s what’s best to do,” said Sumlin.

Some of his old students came back for the ceremony, and he said it was wonderful to see them. He said when he teaches, white belt to brown belt students belong to him, but when they advance to the black belt, they’re on their own.

“I always say, like a bird in a nest. When mom knows the bird is big enough she kicks them out. I always tell them, I got your back 24/7, if you need me OK, but if you’re not doing the right thing all they have to do is think back ‘did I learn this from sensei?,’” said Sumlin.

Winnie Sliger has trained beside Sumlin for most of his teaching career. She said she came up through the ranks just like everybody else and was treated like everyone else because that’s how Sumlin operates — everyone is the welcomed the same way and treated equally.

“It was an amazing part of my life because I never stopped to this day I have never stopped and I was the black belt that stayed with the school to help him run and instruct students and coach with him for many years,” said Sliger.

Sliger has the honor of carrying Sumlin’s style down to which she said is amazing, unexpected and huge.

“He’s the real deal. He’s genuine. When you see Ralph, you talk to him, you know him. That’s him,” said Sliger.

Stacy Fouse, one of Sumlin’s students, said it his accolades are well deserved.

“It was deserved a long time ago. I mean he molded me into the person I am and I wouldn’t be who I am without him. He was a father to all of us. He had a huge impact on all of our lives,” said Fouse.

Betty Louise Michael, age 87 of Seven Pines, Mannington, WV passed away peacefully at her home on Friday, September 24, 2021. She was born January 8, 1934 on Dents Run, WV, a daughter of the late Charles "Buster" McClure and Beulah McClure. She is survived by her husband of 63 years, Curtis …