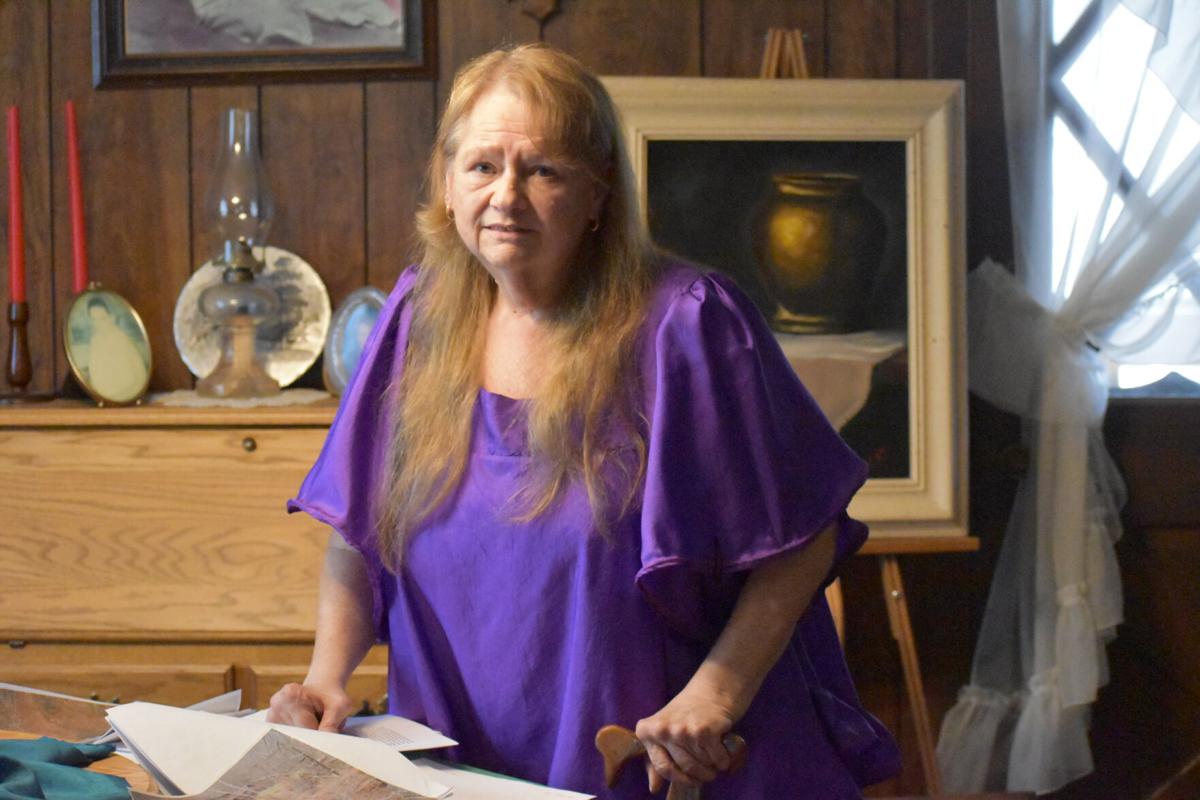 Cathey Morgan has stacks of letters from lawmakers, the West Virginia Department of Highways, her homeowner's insurance company and engineers regarding the slide on her property that began in the 1990s. 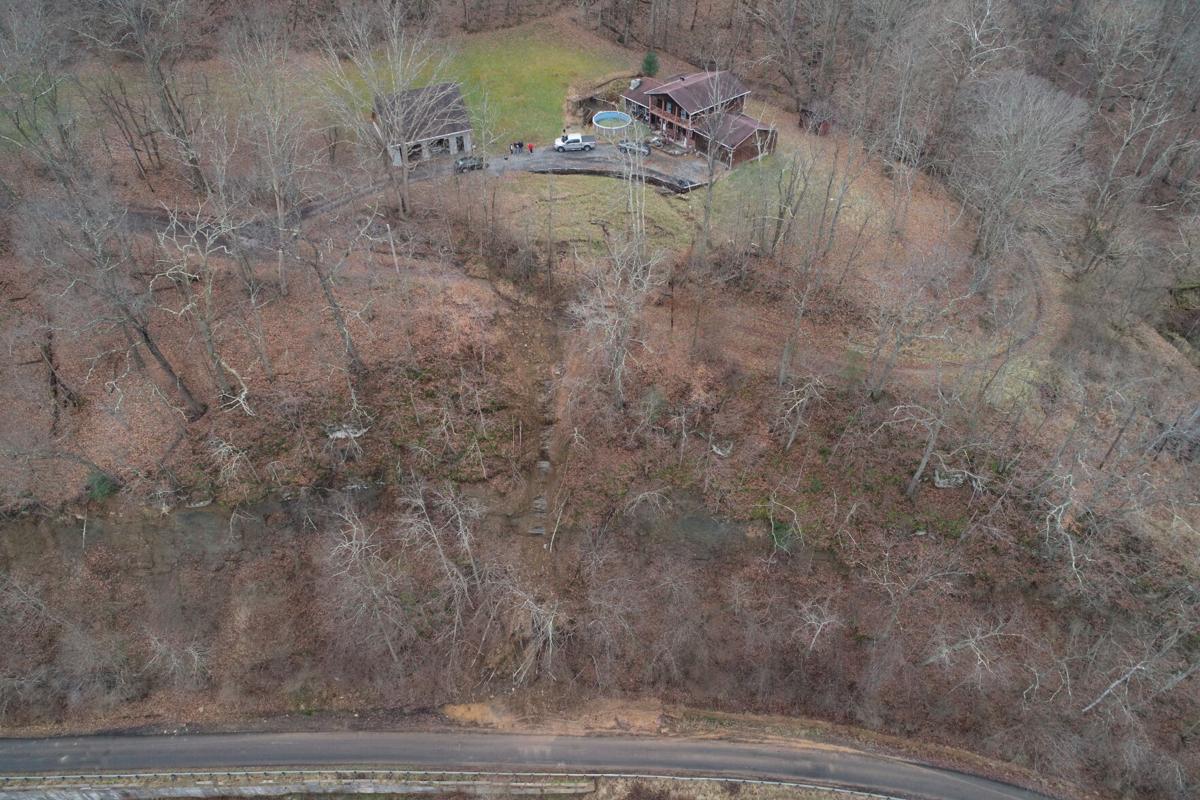 Drone photo of the slide on Round Barn Road in Mannington. 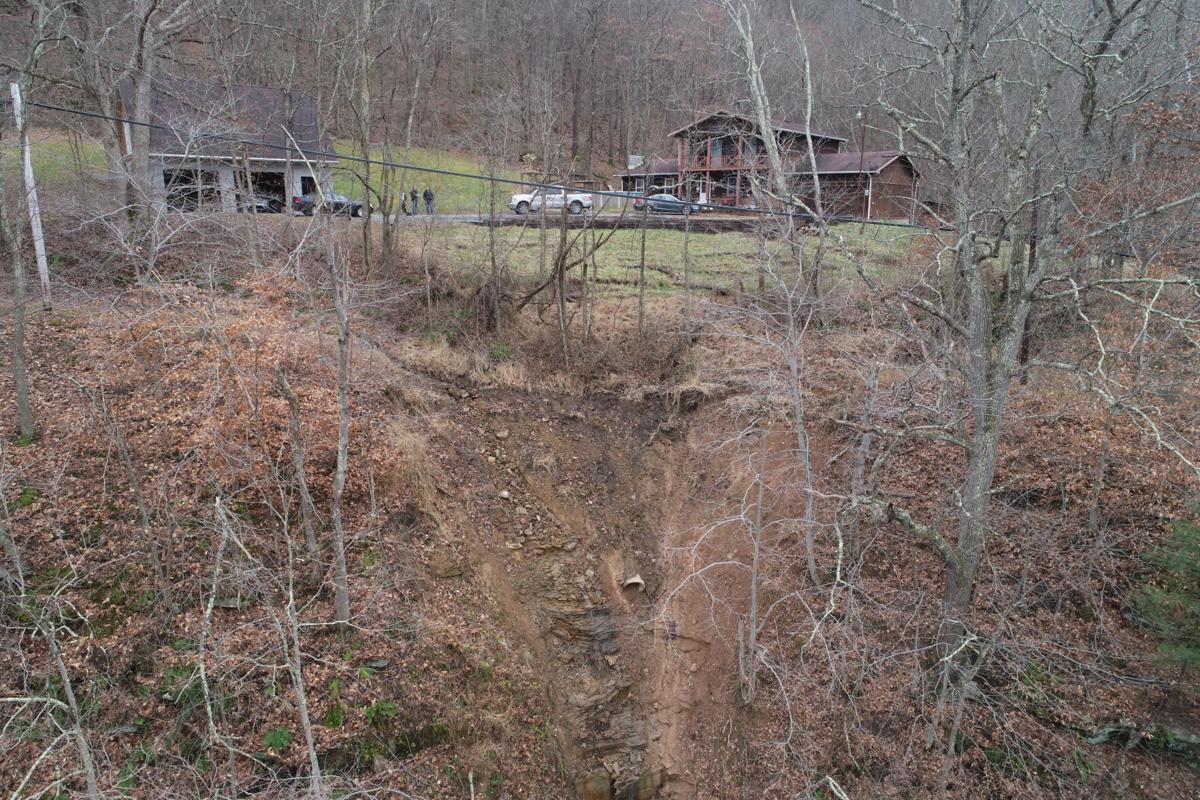 This drone photo shows how the layers of earth are sliding downward on Round Barn Road in Mannington. 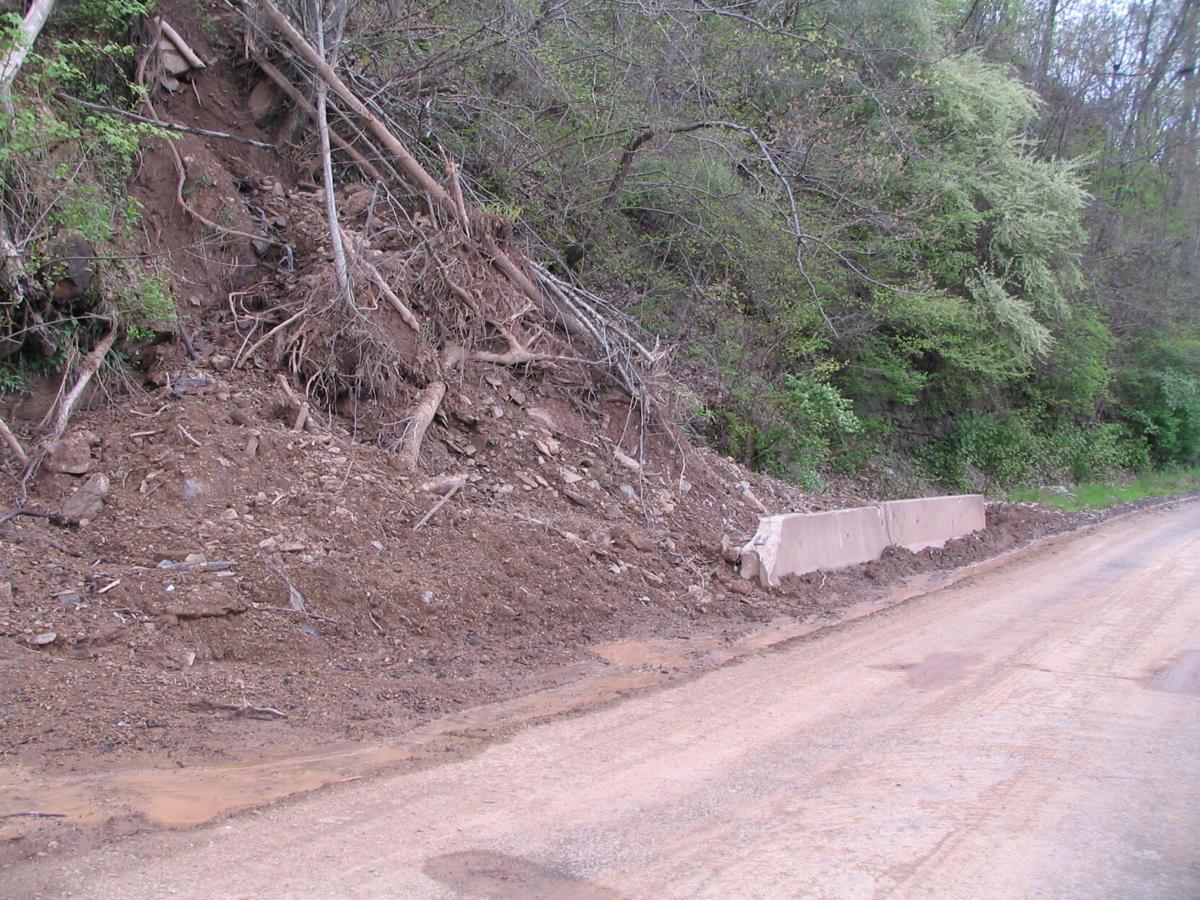 This slide on Sycamore Avenue in Mannington is a result of the slide up the hill on Round Barn Road. 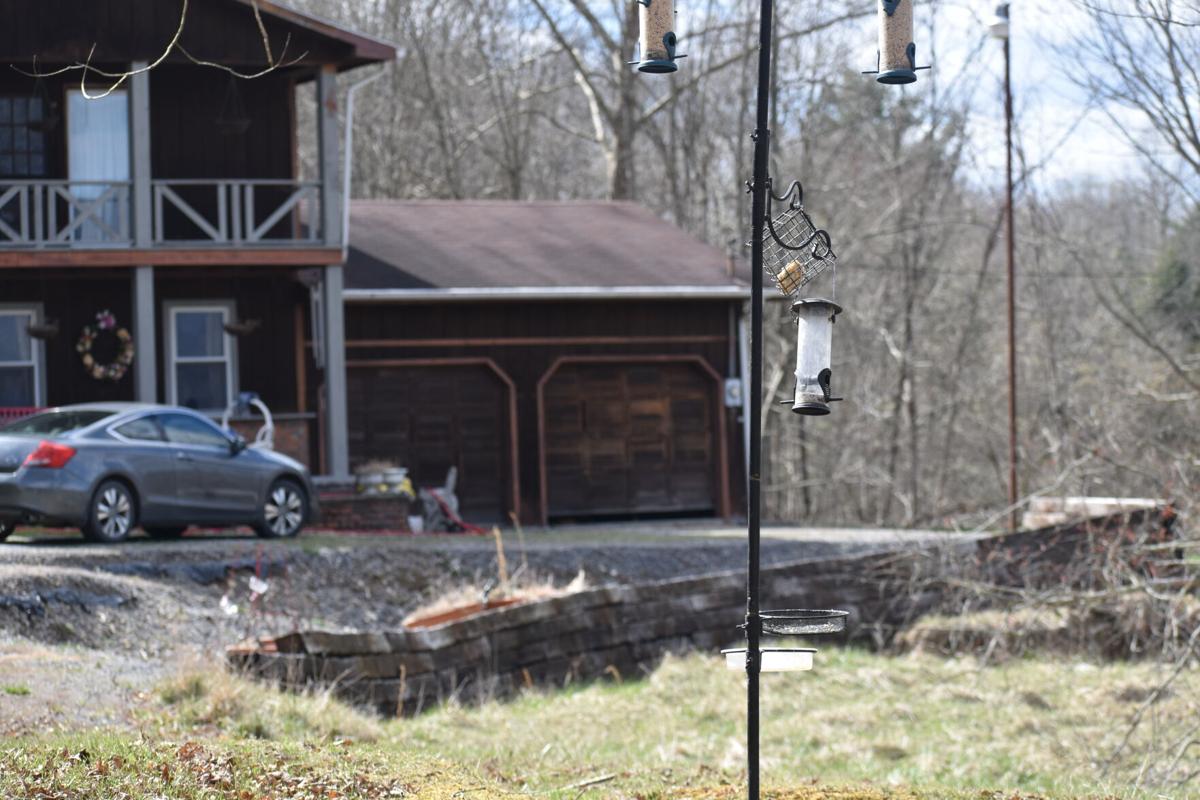 Cathey Morgan’s home on Round Barn Road in Mannington has been experiencing siding since the 1990s.

Cathey Morgan has stacks of letters from lawmakers, the West Virginia Department of Highways, her homeowner's insurance company and engineers regarding the slide on her property that began in the 1990s.

Drone photo of the slide on Round Barn Road in Mannington.

This drone photo shows how the layers of earth are sliding downward on Round Barn Road in Mannington.

This slide on Sycamore Avenue in Mannington is a result of the slide up the hill on Round Barn Road.

Cathey Morgan’s home on Round Barn Road in Mannington has been experiencing siding since the 1990s.

MANNINGTON — With Congress soon scheduled to debate President Joe Biden’s $2 trillion infrastructure plan, Cathey Morgan just wants the state to repair a road adjacent to her property that, she believes, is going to cost her her home.

All through the 1990s, Morgan and her late husband contacted the West Virginia Division of Highways repeatedly voicing their concerns that the Old Clarksburg Turnpike caused their driveway and adjacent property to sink.

The problem became even more real to her one winter day in 2014, when she backed her car out of her garage on Round Barn Road in Mannington and the back end of her car sank three feet. She first thought the cave-in was caused by mine subsidence. So, like any homeowner in West Virginia would do, she called her homeowner's insurance company who then sent out two engineers to look at the situation.

They told her that the state road was causing her property to sink.

Later that year, a DOH official told her, "I don't why we haven't fixed this." He went on to say DOH was to blame for the slide because the state road was built improperly from the start.

The first section of the culvert had fallen out nearly 20 years ago. The hill began to erode then.

Four wheelers would travel the road frequently, according to Morgan. She said she knows there are people who can testify that the road was in disrepair in the 90’s but she had no way of contacting them because they have all moved away from the hollow because they faced similar problems.

“But what they’re trying to say is when we dug out for that garage out there, we messed up the natural water system some way and that’s what caused all this damage,” said Morgan, who along with her husband, built the home in 1979.

She's convinced that her husband became so stressed over the road slide situation, it caused him to have a fatal heart attack.

The road is impassable and has slid significantly downward, with trees and Morgan’s yard following suite. Water has sat in a ditch for years and killed trees. After the trees died, the ground wasn’t solid anymore.

In a letter penned to Morgan in July 2020, Jimmy Wriston, deputy secretary and deputy commissioner for the W.Va. Division of Highways, said the site had been investigated several times since 2014. Wriston claimed water from above washed the roadway surface and embankment away.

His letter explained the roadway rock shelf shows no sign of slippage and there appears to be some erosion due to the 30-inch culvert pipe. Morgan said her letter from Wriston was full of lies.

When asked for comment again, the Department of Highways stated the situation started when the property owner excavated for a garage and placed the material excavated in the front yard; blocking the natural drainage. A slide occurred above the road in the property owners' yard which caused material to plug the drainage pipe below the house. Once the pipe was plugged, material began washing off the steep rock onto the city street below.

“WVDOH has helped to clean up the city street, but our roadway [Round Barn Road] did not slide,” the DOH said in an email.

Morgan said when the ground was excavated for the garage, dirt was not put into the front yard but was distributed to different parts of the property.

“They expect me to lose my house,” said Morgan.

When the hill started to erode further, Morgan told an engineer from DOH that the slide would come further back into her property. Morgan said she had two independent engineers who told her that the state road caused the slide. However, a DOH engineer argued differently.

Morgan said if the DOH had fixed it when she first called, it could have been an easier fix.

Morgan said she’s contacted senators and House of Delegates members over the year seeking help. Someone from both Sens. Joe Manchin and Shelley Moore Capito’s offices have been in contact with her but both said they had no control of what happened at the state level. She has stacks of letters and pictures she’s sent and received over the years.

“The first thing happened in 2014. But the big slide happened in 2016 and now it keeps over and over again breaking off and going down into Mannington,” said Morgan.

Officials from the City of Mannington wrote a letter to DOH imploring the state to do something because they believe somebody is going to be seriously hurt or killed.

“All those trees that are laying sideways out there, they used to be in my yard,” said Morgan.

The DOH came up recently and spent two days cleaning up some of the slide that went into Mannington. Morgan asked them what else they were planning on doing and they said nothing.

“This whole thing is going to come down into Mannington. I have not slept upstairs since 2016. I sleep in that chair because I’m afraid the back of the house will come in and I won’t be able to get out,” said Morgan.

Morgan tried to get a loan on the house so she afford paying a lawyer to fight on her behalf, but the bank wouldn’t loan her the money.

"My house is all I've got," she said. However, she said selling the house also doesn’t seem like a possibility.

Mike Angelucci, former Marion County Delegate, said he contacted DOH engineers several times on Morgan's behalf to have them look at the situation and try to develop a solution.

“Unfortunately, they have not taken that as a priority,” said Angelucci.

Mannington Mayor Ray Shadrick said the city's street superintendent, Tim Nice, has talked with the DOH district office about the situation. And city council sent a letter Feb. 1 to Michael Cronin, the DOH district engineer. Shadrick said Sycamore Road below Round Barn Road has to be scraped several times a year because the debris from above the road gets so bad. He said the state recently hauled 50 truckloads of rock and dirt away.

The letter to Cronin stated that the city contacted the DOH several times and their response had been “tepid at best.” Shadrick said the situation is dangerous.

“It could be any given time that that house could be just washed away down on Sycamore Road,” said Shadrick.

Shadrick said that with every major rain event the slide has given way. He said all the stuff that the city and the state has hauled out from the slide used to be on the hillside near Morgan's property.

“Their [DOH] response was given to my street superintendent Tim Nice that they had no responsibility for the problem. That the weight of the house must be pushing the ground away. That was one of their replies,” said Shadrick.

Shadrick has talked with Morgan and said he feels sorry for her.

“It’s not in the city. There’s nothing we can do,” said Shadrick.

Shadrick said multiple branches of government have been contacted about the road. He said Morgan seems to out of options. He said the house has been there for over 20 years, and until the culvert washed out, there were no issues.

“We believe it all stems from a washed out culvert that was the state’s,” said Shadrick.