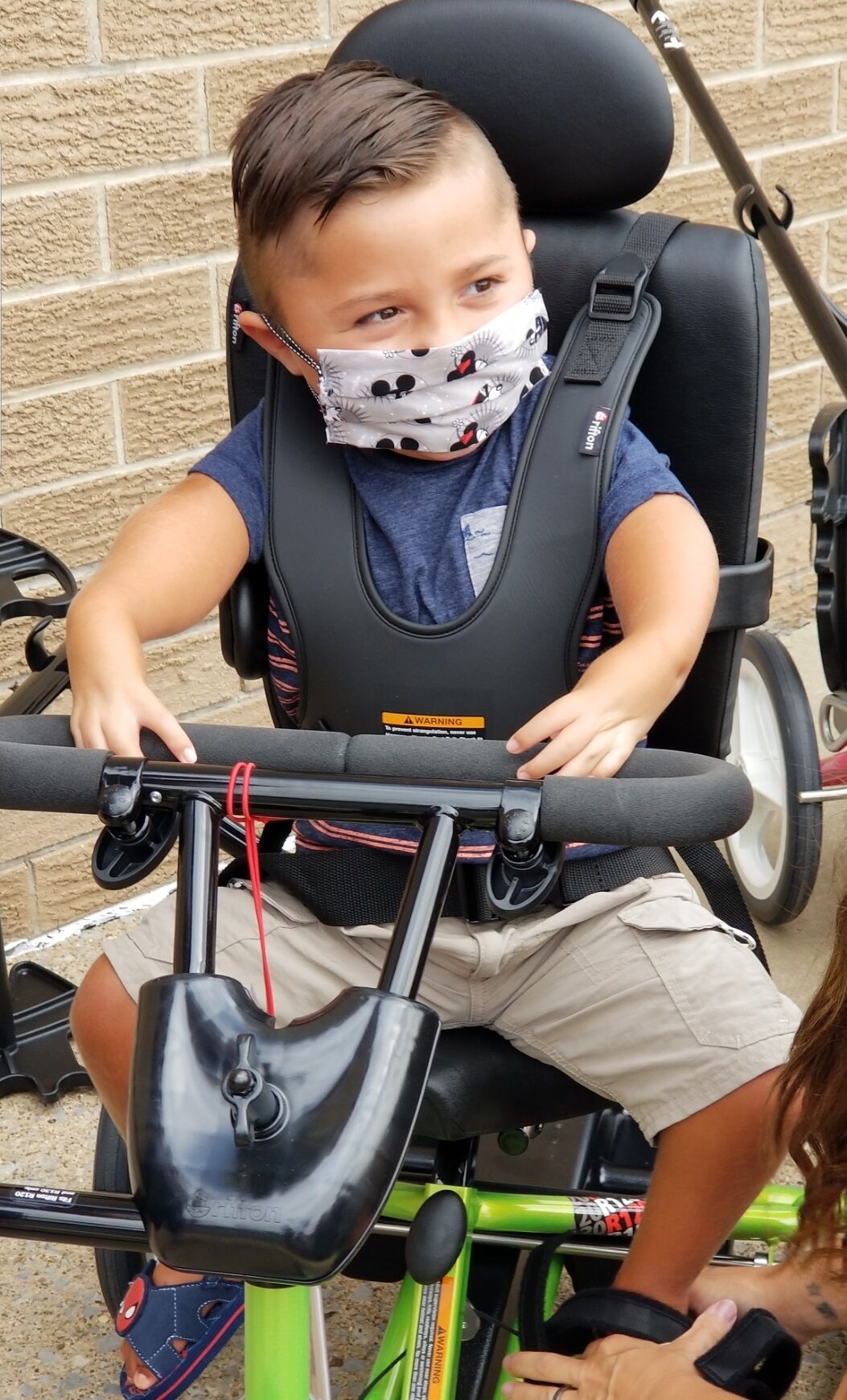 Zacari, 4, who was born with a rare neuromuscular disorder that causes a loss of flexibility in muscles, tendons, ligaments and joints, rides a bike for the first time on Thursday. 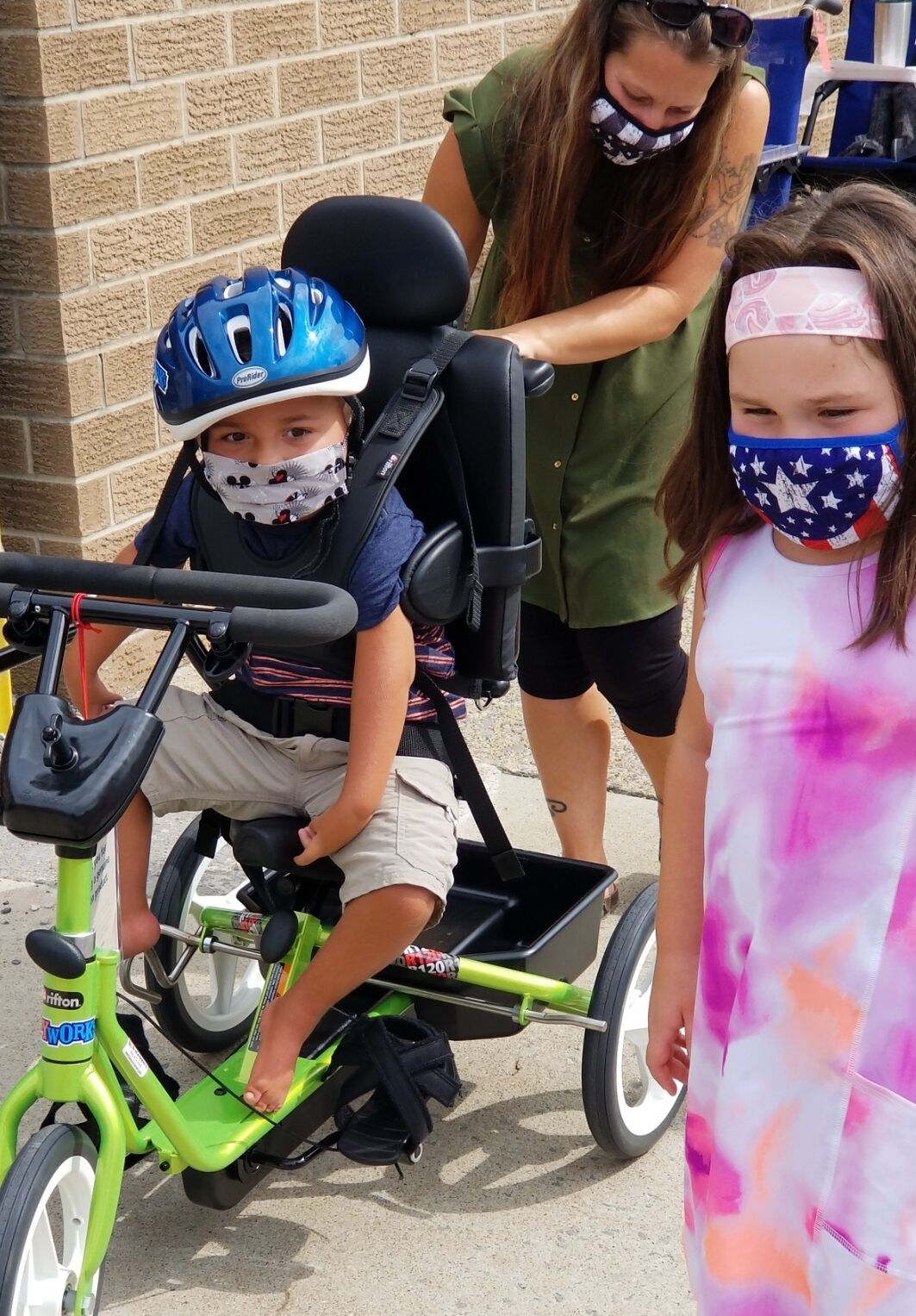 Zacari, age 4, of Fairmont, takes his first ride on his adaptive tricycle accompanied by his grandmother Abby Rager of Fairmont and sister Aleeah. 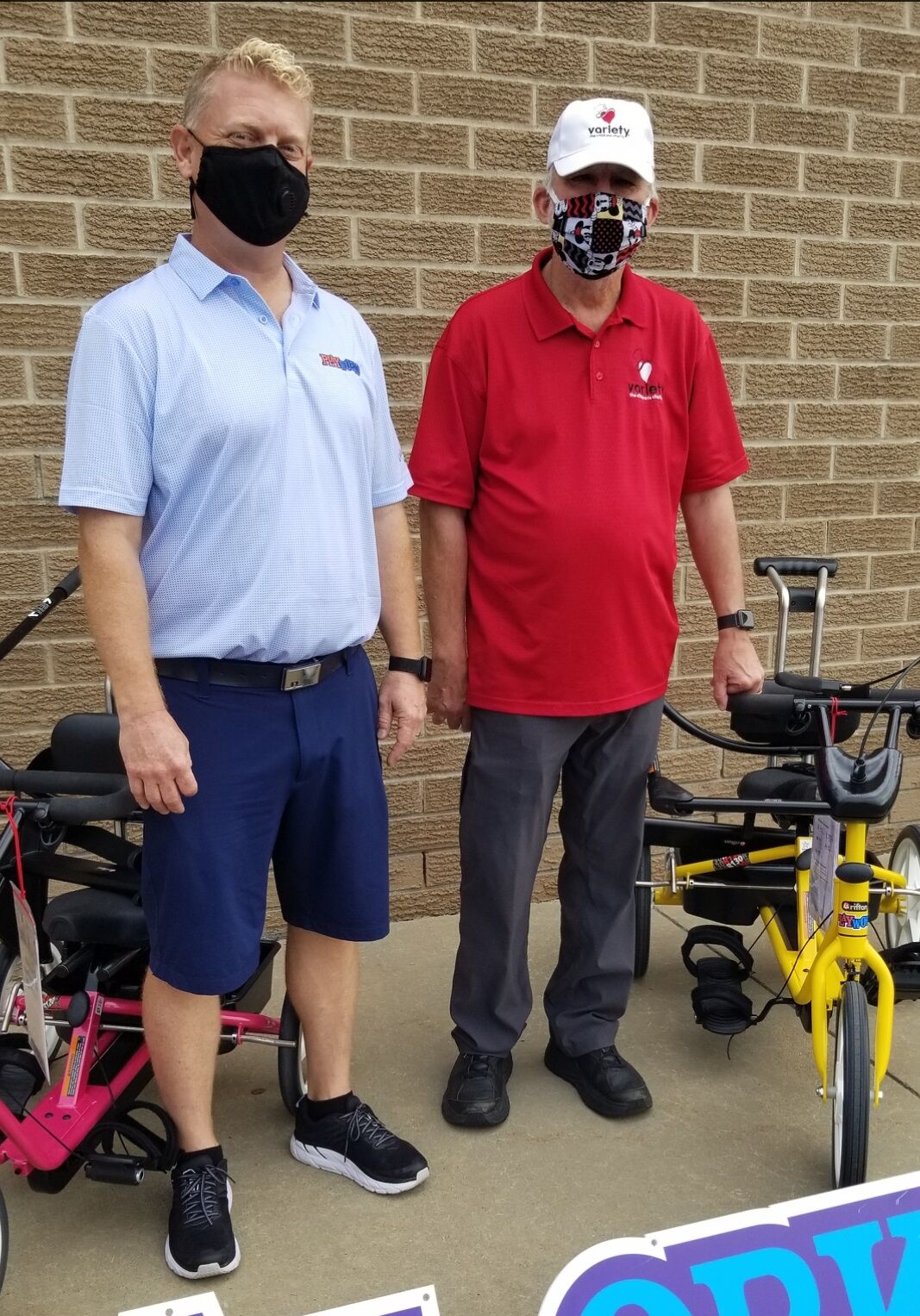 Zacari, 4, who was born with a rare neuromuscular disorder that causes a loss of flexibility in muscles, tendons, ligaments and joints, rides a bike for the first time on Thursday.

Zacari, age 4, of Fairmont, takes his first ride on his adaptive tricycle accompanied by his grandmother Abby Rager of Fairmont and sister Aleeah.

MORGANTOWN — A group of onlookers cheered as four-year-old Zacari rode a bicycle for the first time on Thursday.

Born with arthrogryposis multiplex congenita, a rare neuromuscular disorder that causes a loss of flexibility in muscles, tendons, ligaments and joints, Zacari has trouble bending or straightening his arms and legs.

“He can’t straighten his legs. They’re stuck in one position and locked. His elbows and wrists don’t bend. His feet and hands are clubbed. The muscles in his shoulders just hang there,” said Abby Rager, of Fairmont, Zacari’s grandmother and guardian.

But there he was, pedaling down the sidewalk in front of Playworks, a child development center located in Morgantown’s Mountaineer Mall.

“Zacari has been ecstatic. He’s never gotten to ride a bike until today,” said his great-grandmother, Sandra Morgan, also a Fairmont resident.

His older sister, Aleeah, beamed with pride as she walked beside him, offering him words of encouragement.

“Now we can ride together, bubby,” she whispered to Zacari.

Zacari’s bike was built specifically for him by Pittsburgh-based Variety, which bills itself as “the children’s charity.” The Rifton adaptive bicycle is individually customized to account for Zacari’s specific and significant needs, and allows him to have the freedom of a bicycle, the joy of riding alongside family and friends, and the safety and security his physical condition demands.

The bike cost $2,200. But Zacari’s family didn’t pay a penny for it. Nobody who receives a Variety device is charged, ever.

Throughout the day of Zacari’s first ride, Variety and Playworks hosted several area children with disabilities and their families, providing each of them with free adaptive bicycles or adaptive strollers or communication devices. Or sometimes all three.

Variety President & CEO Charlie LaVallee founded the nonprofit in 2014. Since then, Variety has teamed with organizations like Playworks to give away 3,500 bikes, strollers, or specially-designed iPads worth millions of dollars.

“When we started, I didn’t know if we could get to 50 bikes because they’re expensive. But now we’ve distributed more than $5 million in equipment,” LaVallee said. “We’re in 59 counties in Pennsylvania and 12 counties in West Virginia and our goal is to find every eligible kid.”

LaVallee, who was instrumental in forming what is now the Child Health Insurance Program and who was close friends with Mister Rogers, said costs are defrayed by fundraising activities to such an extent that most parents or guardians with a disabled child will likely qualify for the free adaptive bikes, strollers, and iPad-based communication devices.

“I’ve set our income guidelines very high, such as $131,000 for a family of four. Many people assume that’s too good to be true. It’s not,” said LaVallee. “I wanted to help moderate and middle-income families because when you’re raising a kid with a disability, you’re typically spending four to five times what a typical child costs.”

He said the Variety program exists to give away these items to families who might otherwise think they can’t afford it.

“You might want to get an adaptive bike because you think your child would have great fun with it, but you can’t fit it into your household budget because you just spent $40,000 on an adaptive van to accommodate your child’s power wheelchair. We want people to know our income guidelines are high,” LaVallee said.

He said he doesn’t want families to have to choose between a bike or a stroller or a communication device.

“If you’re eligible, get all three,” he said.

All that’s necessary is a note from the child’s therapist and the completion of an online form.

“The child’s therapist will need to determine if it’s appropriate, that he or she could benefit from having the item and that the child can use it safely,” he said.

The communication devices are important because “some kids can’t tell you how they’re feeling. Maybe they’re scared, maybe they’ve been bullied,” said LaVallee.

Playworks’ owner Mike Lentz is an occupational therapist by training. In 2008, he founded the company after working nine years in the Monongalia County Schools. Today, Playworks employs 14 therapists and serves hundreds of clients.

He said helping children such as Zacari is rewarding, professional and personally.

“The best part about what I’m able to do as a therapist is see guys like Zacari grow as people, to be able to do things they or their parents maybe thought they could never do. That’s why the bike program is such a big part of what we do,” Lentz said.

He said it’s important children with physical limitations are able to enjoy what other children are doing.

“As the kids get older, they often feel like they’re missing something. They realize that maybe they won’t be able to ride a bike. That makes them feel different and we don’t want anybody we see to feel different for any reason,” Lentz said. “We try to make whatever accommodations are necessary and work on whatever skills the kids need to be functional and happy and efficient. If we do that, then we’re doing our job.”

Both Lentz and LaVallee their goal is to give away as many adaptive bikes, strollers and iPads as possible.

“The best thing anyone can do is tell somebody about the program. If a neighbor kid gets a bike or if you read this article, please tell somebody you know. I challenge everyone to find someone whose life can be improved by one of these items we’re giving away. What we really need is for people to spread the word, so we can provide even more. We want to reach all the kids who need these devices,” Lentz said.

LaVallee echoed the sentiment as he quoted from his old friend Mister Rogers.

“Fred said, ‘The media can be a force for good.’ And I think what would be cool about this story is if somebody reads it and tells somebody else, then others kids can get these bikes,” he said.

“It’s been absolutely transformative. At first, I thought we were doing this for the kids, which we are. But it’s more than that. Seeing a brother and sister getting to ride together, which they’ve never done before, is wonderful. If that doesn’t turn you on, then you probably don’t want to be involved with us. But I think it’s knockout happy,” he said.

“I’ve noticed in all of us who’ve been involved, the kids’ joy changes us. If we do what we should do, which is to enable these kids to have the fullest life they can, their joy is our reward. I wish everyone could touch their joy,” he said. “How can you resist joy? Especially at this time, during a pandemic and all the impact it’s had on everyone. Joy changes us. I feel blessed and honored to be able to do it.”

For more information on Variety or to apply for an adaptive bicycle, stroller or communication device, visit varietypittsburgh.org or phone 724-933-0460.

For more information on Playworks, visit playworkscdc.com or phone 304-225-7529.