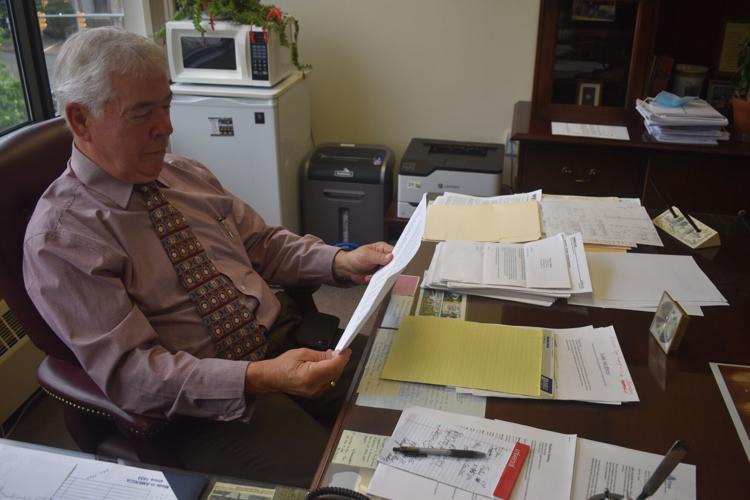 Marion County Assessor Mark Trach reviews the numbers of the possible impact of Amendment 1 at his desk. 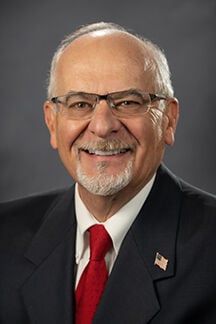 FAIRMONT — An amendment to the West Virginia Constitution heading to the ballot this November could leave an $11 million hole in Marion County’s funding.

The formally titled the “Property Tax Modernization Amendment” — shortened to Amendment 1 — passed through the West Virginia Legislature and now bears the governor’s signature. Now it’s headed to the ballot for the public vote.

Amendment 1 would change the state’s constitutional tax code and allow the legislature to make changes and exemptions to it. The main target of the exemption is the personal property tax, which is paid to counties by any resident who owns property that requires a title.

The most abundant examples are automobiles, but personal property tax is also paid on boats, RVs, trailers and other miscellaneous titled property.

This tax goes to the county coffers, and Marion County’s cut is in the neighborhood of $11.7 million based on estimates from the Assessor’s Office.

The original bill that led to the amendment was championed by Del. Phil Mallow, R-Marion. Mallow said in an email to the Times West Virginian that this bill is trying to lift the burden of taxes on the families who have chosen to stay in West Virginia.

“In the last 10 years, the State of West Virginia has lost approximately two hundred thousand people from its population as has been noted by the loss of a U.S. Congressman,” Mallow said. “For those who cannot afford or choose not to leave the state, they will be forced to pay higher and higher taxes to maintain the services that they have grown accustomed to like police and fire protection, road maintenance, and garbage removal.”

During the 2021 legislative session, House Joint Resolution 3 was overwhelmingly approved by…

However, the major concern among the counties is if the legislature will address concerns during the upcoming special session and address the possible monetary hole that will be left in the wake of Amendment 1.

“We have a lot of questions with it and not a lot of answers,” Marion County Chief Deputy Assessor Cathy Webb said. “Our biggest concern is that [the legislature] has not said how they’re going to make up that lost money.”

And that money isn’t just sitting in a general fund somewhere, that $11.7 million is what pays for the fire departments and police forces around the county.

But the entity who would feel possible cuts by Amendment 1 the most would be Marion County Schools, which receives 80 percent of the county’s annual take.

The school district receives these funds through its excess levy, which is also up for a vote this November.

According to School District Treasurer Scott Reider, these dollars are used to pay for items such as textbooks, instructional equipment, teacher pay and benefits.

“Our excess levy lays out what proportions of that money goes into several categories. If our total received shrinks, it’ll shrink the budget in each of these areas,” Reider said. “Eleven percent goes to instructional supplies, ... 37 percent goes to salaries and benefits, ... 16 percent goes to maintenance and transportation improvements, ... 24 percent pays for personnel overages, ... then technology and capital improvements is 13 percent.”

Were Amendment 1 to pass, it would give the legislature the power to shrink the budget of an already struggling school district. Marion County School officials have been transparent about its overages in personnel and its struggles with dropping enrollment.

Currently, the district employs 180 more personnel than the state pays for. While the levy does allow for some overages, the district is spending over the “optimal excessive cost.” The levy can cover $10.7 million in personnel overages and this year the county spent $2.7 million more than the levy’s optimal limit.

In tandem with falling enrollment and shrinking state dollars, a budget loss of around $9 million from changes due to Amendment 1 would be detrimental.

“It’s very concerning. We’ve lost $3 million in state aid the past three years and we’re not going to have that federal Band-Aid of [American Rescue Plan] dollars coming up in a few years,” Reider said. “The levy is 20 to 25 percent of our budget, that’d be a huge hit.”

However, Reider is hopeful that Marion County voter’s track record of supporting the levy will continue. Marion County residents have voted to pass the school levy since 1947, and he doesn’t believe that will end.

However, both he and the Assessor’s Office are worried that Amendment 1 will pass. The current wording that will be on the ballot makes the measure sound like a simple tax cut, when in reality it’s a blow to the funding of many organizations around the county.

The state has said it will cover the revenue of the personal property income, but some fear the state has overlooked the income that goes toward the levy funds.

Del. Mallow said this measure will allow the legislature to look at adjustments and find solutions to ease the tax burden on West Virginians, while maintaining county assets and services.

“This [amendment] simply allows the public to decide if they want the Legislature to be able to exempt tangible machinery, equipment and inventory directly used in business activity as well as motor vehicles from the personal property taxes we currently charge in West Virginia,” Mallow said. “Many folks have already begun discussions about how we could lift these tax burdens without harming our counties and all the important services they provide.”

Marion County Assessor Mark Trach said he and other assessors around the state are getting ready to educate the public about the possible ramifications if Amendment 1 is approved.

“We assessors collectively are amping up to be there [at the legislature] when all this comes to fruition,” Trach said. “Personally, I want my employees to be better educated on this topic, so when the taxpayer comes in with questions they know how to answer.”

The message to the voters this November from the Assessor’s Office is to look into Amendment 1 and really see what it would mean if it passed.

“We just really encourage the taxpayer to look into this and really know what you’re voting for,” Webb said. “On the outside it looks like an easy ‘yes’ but if you dig deeper, they’re going to have to make up this money somewhere, so [the taxpayer] needs to be asking where it’ll come from.”