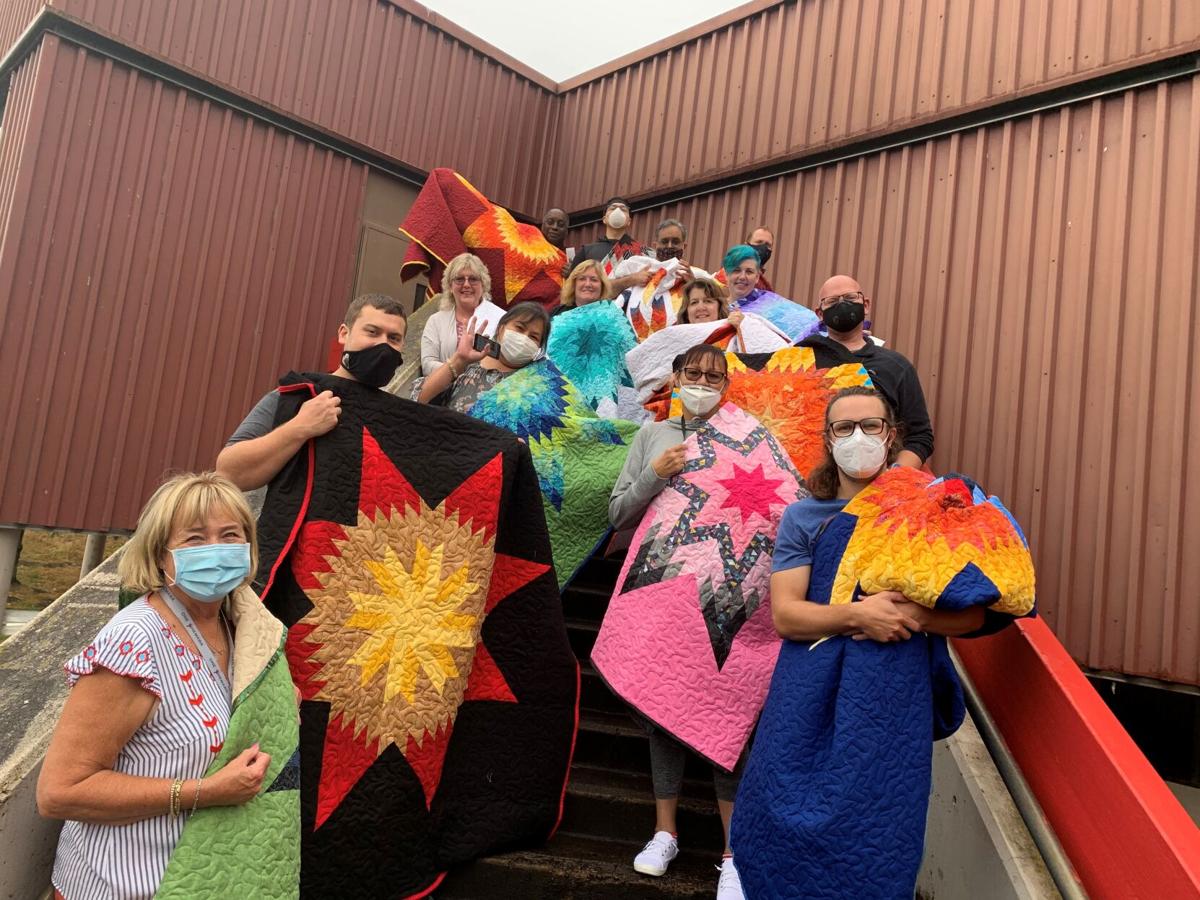 The star quilts displayed here were donated to Jemma Moccasin’s teachers when she graduated from Chemawa Indian School in Salem, Oregon. 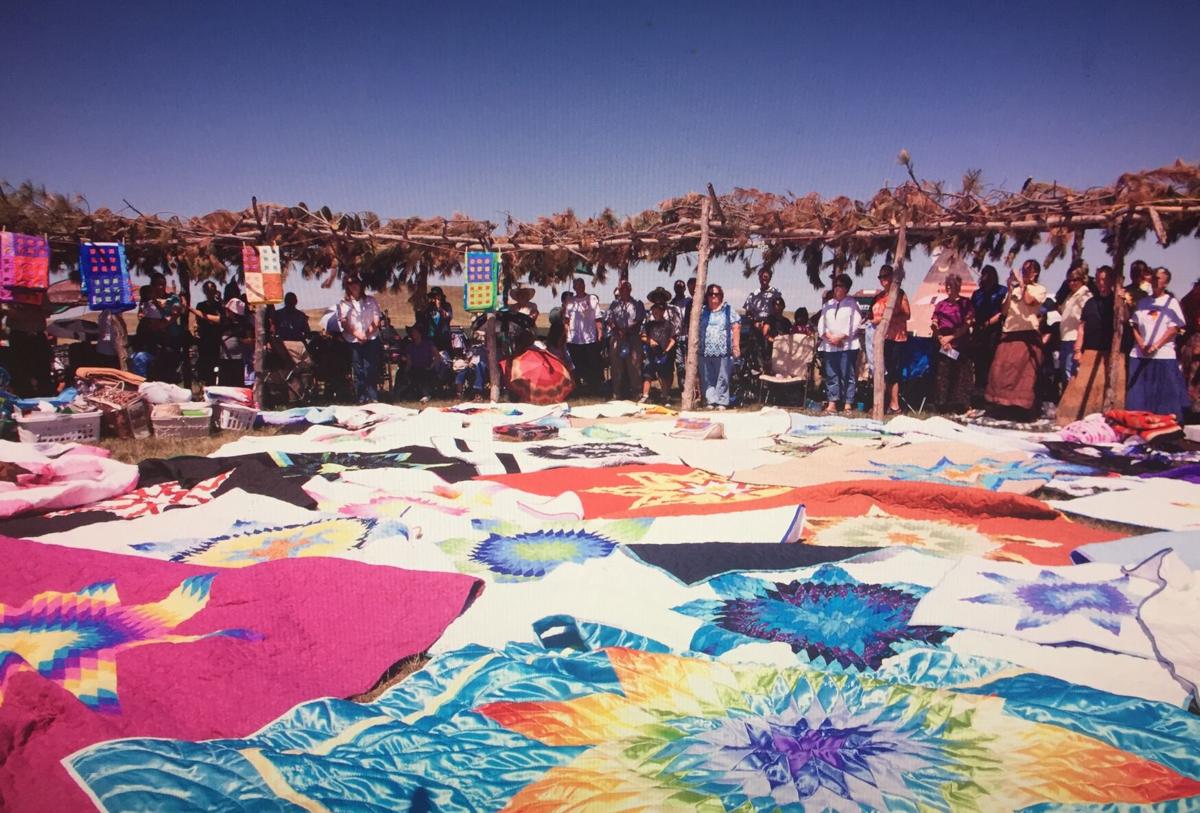 Lakota members gave away star quilts, shown here, at Don Moccasin's wake in South Dakota. Don's wife, Margaret MacKichan, recently gave a presentation about star quilts to the Mountain Heritage Quilters Guild, whose members in turn, practiced the Lakota give away in the form of fabrics, sewing notions, and machines that were trucked from West Virginia to the reservation.

The star quilts displayed here were donated to Jemma Moccasin’s teachers when she graduated from Chemawa Indian School in Salem, Oregon.

Lakota members gave away star quilts, shown here, at Don Moccasin's wake in South Dakota. Don's wife, Margaret MacKichan, recently gave a presentation about star quilts to the Mountain Heritage Quilters Guild, whose members in turn, practiced the Lakota give away in the form of fabrics, sewing notions, and machines that were trucked from West Virginia to the reservation.

FAIRMONT — What started out as a virtual lesson about the history and significance of the Lakota star quilt turned into a multi-state outreach project for members of West Virginia’s Mountain Heritage Quilters Guild.

To stay connected during the pandemic, the Guild continued to meet virtually, so Vice President Connie Pirner, of Barrackville, asked her friend Margaret MacKichan, director of the Great Plains Art Institute at Sinte Gleska University in South Dakota, to lead a class on the history and significance of the star quilt.

“I began the lecture with a history of the Lakota people,” said MacKichan, whose late husband, Don Moccasin, was a fluent speaker, Sun Dancer, teacher and Lakota language documentarian. “Initially robes of buffalo hide were the clothing and covering of the people. These robes were often painted with designs full of meaning. I told the story of the near extinction of the buffalo once the non-Indians came onto the plains, and how quilt designs began to fill the void in the culture. Much of the history and the people’s struggle to survive as a nation was very moving to the Mountain Heritage Quilt Guild.”

To the people of the Lakota Sioux tribe, located on the Rosebud Sioux Reservation in south central South Dakota, the star quilt is central in many of life’s big moments.

“Star quilts are needed to mark every important event in a Lakota life,” MacKichan said, known by her friends as Maggie. “They are given away to honor the people who have helped a family member in their journey. They are given to an individual to mark an achievement, like election to tribal council, or earning a diploma. They are given, sometimes in great number, by a family to other people, to honor a relative who has achieved something. Teachers, doctors, elders are remembered with the gift of a star quilt. They are given after someone is cured from illness, or a child is born, or a deceased is memorialized.

“Giving is a measure of love and respect.”

Inspired by the Lakota spirit of giving, Guild members gathered donations of fabric, sewing supplies, yarn and eight sewing machines and loaded it all into a truck and trailer. A Guild member drove the supplies more than 1,200 miles to the Rosebud Indian Reservation in time for the goods to be distributed to the Lakota people during the 145th annual Rosebud Pow Wow held Aug. 27-29. Th e goods were organized, neatly folded and laid out on a large sheet.

“My friend [Maggie] talked about how separated people are on the reservation and how a lot of women didn’t have money to buy fabric to make the quilts, so that’s kind of what inspired people to give because so many of us have extra fabric,” Pirner said. “People were crying, people were calling me and it was very emotional.”

Pirner said it is ingrained in the Lakota culture for people to be self-sufficient and the donations were unexpected and appreciated.

“If you’re on the reservation, you see someone walking, even if they’re walking 20 miles, they will not hitchhike,” Pirner said of her time living on the Rosebud reservation with husband and Lakota member Bob Pirner. “If you stop and offer them a ride, they’ll accept it but they won’t ask. They would never put you in a position to make you uncomfortable to say no.”

Although designs differ, eight small diamonds stitched together form the innermost star with colorful diamonds radiating outward, forming a large, eight pointed star. According to STJO.org, the inspiration for the star quilt’s pattern comes from the Morning Star, the brightest star seen on the eastern horizon before dawn breaks and is a pathway between Earth and the afterlife.

“You ever have something just fall in your lap?” Sago said. “Better than good and it was what everybody here needed halfway through the pandemic. You had faith and you had hope and we could help out this group tremendously. When [Maggie] spoke and touched everyone’s hearts so much on the Lakota and all this going on, one thing led to the next and the project took wings of its own. We’re always doing outreach in our surrounding community of West Virginia, but I don’t think we’d ever ventured out of state.”

MacKichan and her daughter, Jemma Moccasin, attended the Rosebud Pow Wow and witnessed every scrap of fabric taken to be used not only for quilting but to fabricate ribbon skirts worn today by Lakota women at all important ceremonies, dance outfits and bedding.

“Every speck of material and yarn was dispersed,” MacKichan said. “The women came with their families, who helped to choose the material they would like in their outfits and blankets. Ninety year-old women to toddlers looked through the stacks and boxes of material. The machines were given to young women and families who wanted to make items but were unable to due to lack of material and sewing machines.”

The Mountain Heritage Quilters Guild of Marion County is the second oldest quilt guild in West Virginia and is a nonprofit organization whose purpose is to promote quilting and to encourage learning, understanding, and appreciation of the art of quilting.

The group formed in July 1982 and completes many service projects for foster children, Meals on Wheels recipients and veterans. For more information, email Lynda Sago at ljsago4mc@gmail.com.