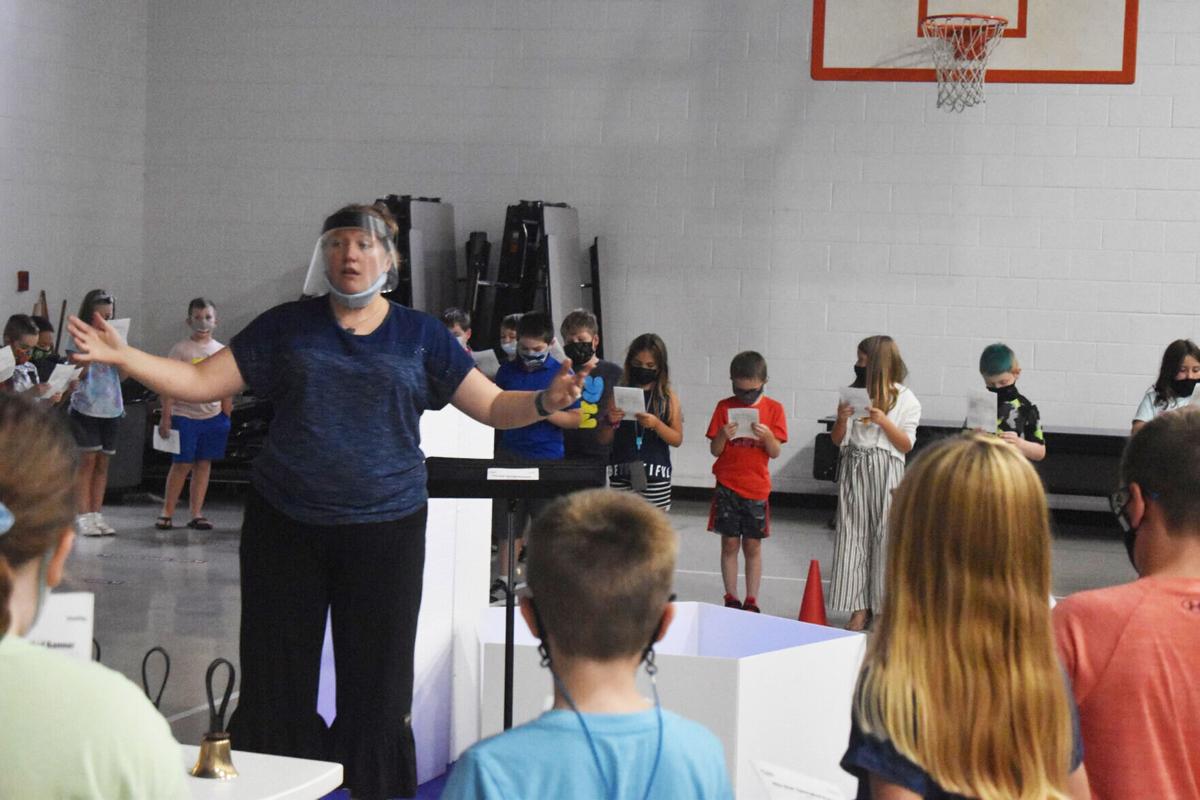 Brittany Oates conducts the students in singing a selection of songs to commemorate the 20th anniversary of 9/11. 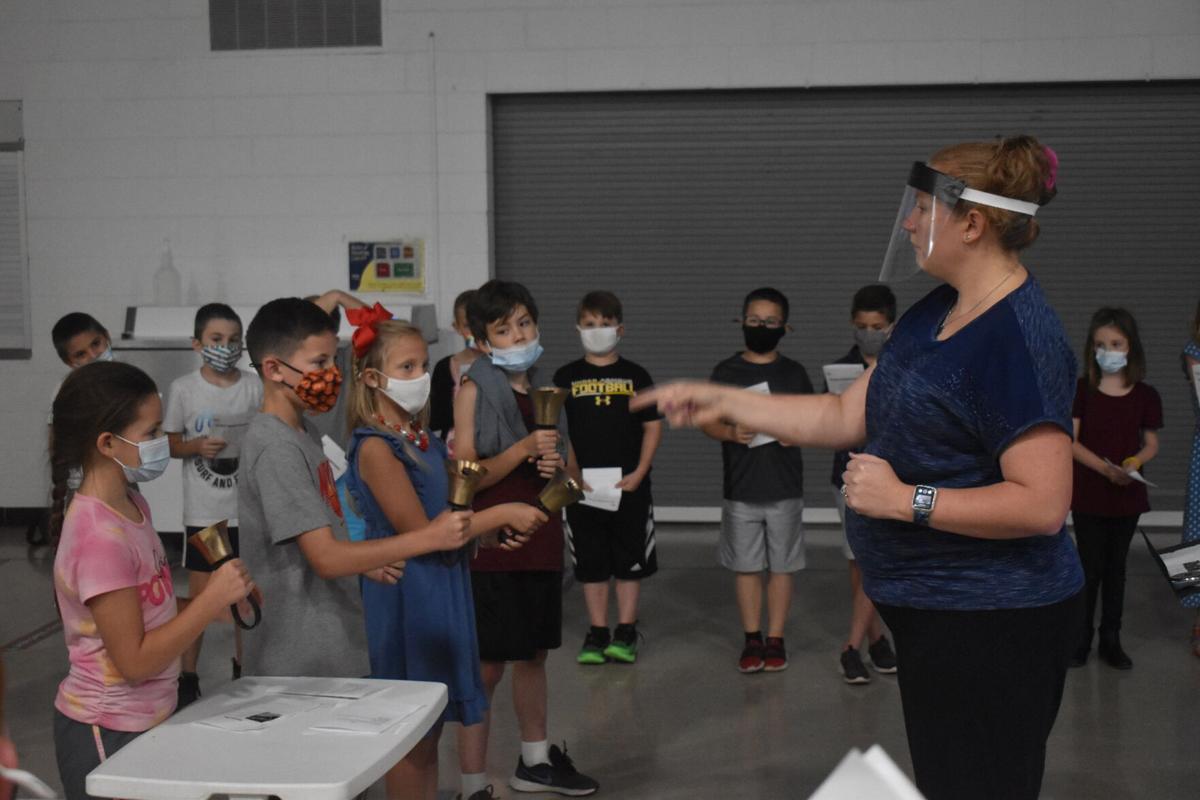 The final song students sang Wednesday was “Taps.” At the end, four students played the melody again with hand bells. 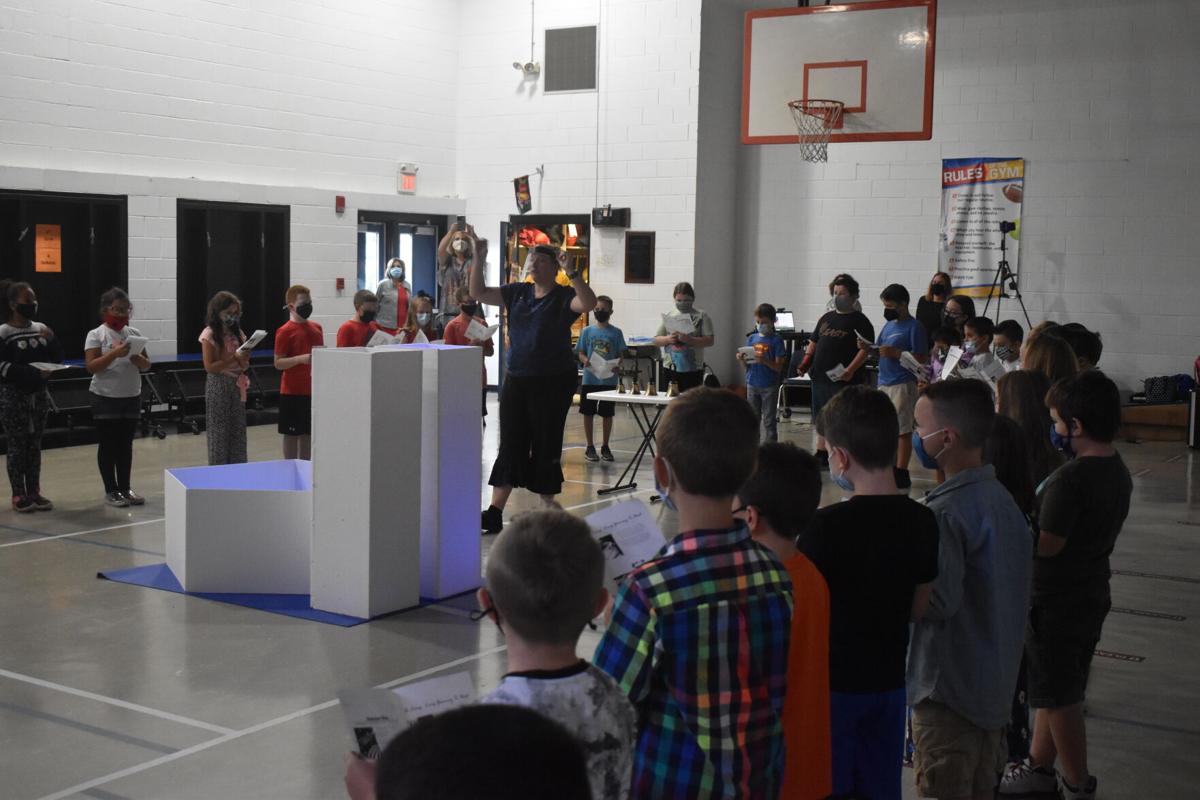 Pleasant Valley Elementary students stand in a heart shape around two model towers and a pentagon — the two major sites attacked 20 years ago.

Brittany Oates conducts the students in singing a selection of songs to commemorate the 20th anniversary of 9/11.

The final song students sang Wednesday was “Taps.” At the end, four students played the melody again with hand bells.

Pleasant Valley Elementary students stand in a heart shape around two model towers and a pentagon — the two major sites attacked 20 years ago.

“My student teacher was teaching ‘Dancing Spaghetti,’ I’ll never forget that,” said Middlemas, now principal at Pleasant Valley Elementary. “We [teachers] were all called out into the hallway and our principal told us to not discuss it with the kids.”

After all, these were elementary school children. The harsh realities of 9/11 are a bit graphic to teach to young kids.

However, to commemorate the 20th anniversary of that day, teachers at Pleasant Valley are looking to use the memory of that tragedy to teach their students some valuable lessons.

“I’m not so sure that I have the right as an administrator to teach [the students] all about 9/11, it could offend some parents,” Middlemas said. “Of course, we don’t want to go too in-depth with it, but I think it’s important that [the students] have respect for first responders and the flag and their freedoms.”

To Middlemas, 9/11 is the perfect opportunity to show kids the importance of citizenship and freedom.

However, there are some barriers. It’s hard to believe 2021 marks the 20th anniversary of the attacks, it’s even harder to believe that every U.S. public school student — barring a few outliers — was born since the attacks took place.

“A lot of [students] can’t relate to 9/11,” Middlemas said. “But if they know people sacrificed their lives for them to be free, that’s what’s important to me.”

Wednesday, third and fourth grade students gathered in Pleasant Valley’s gymnasium and were lead by the school’s general music teacher, Brittany Oates, in four songs to commemorate the 20th anniversary of 9/11.

The group sang “The Star Spangled Banner,” “Patriot Day,” “A Long Long Journey to Heal” and “Taps.” The students stood in a heart formation around models of the Twin Towers and the Pentagon as they performed.

“Music helps us understand and feel events no matter what they are,” Oates said. “Whether it’s a song written about an event or one we relate to an event, they help us understand and... draw a connection to [those affected].”

The performance was recorded and was later combined with a lesson that was given by school guidance counselor Lisa Boyle. The recording will be sent out on Sept. 10 over video feed for other teachers to show to their students and will be posted on the Marion County Schools Facebook page.

The lesson will be about helping out no matter how small a person feels. Boyle will be teaching from a children’s book called “Fireboat,” which is a true story about an old fire fighting tug boat that was set to be refurbished as a ferry, but with the sudden need for first responders on Sept. 11, the boat was brought out of retirement to help fight the fires in New York City.

“I’ll talk to the students about unexpected times when you’ll be called on to be helpful, lending a helping hand and unexpected heroes,” Boyle said.

In the high schools

North Marion High Principal Kristin DeVaul said that in the last 20 years, the way the events of 9/11 are taught to students has certainly changed.

“We have moved from our students having experienced it personally, to now ... where they get it secondhand through teachers telling stories in the classroom, through documentaries or textbooks,” DeVaul said. “For us, we want to make them aware of the events but we want to ... really call to attention the sacrifice that first responders make, not just on that day, but always.”

Students will make cards thanking first responders and sending them out to the local departments around the county.

Teachers will use 9/11 as a springboard to characterize the sacrifice first responders make every day.

“We also want to make sure our students can take the events of 9/11 and understand that they had a major impact on American society,” DeVaul said. “Those impacts are continuing to evolve. The world our kids know now is a result of 9/11.”

School Superintendent Donna Hage hopes to roll the teachings of the events of 9/11 alongside the teaching of the United States’ founding documents.

“We have selected Sept. 10-17 as our Celebrate Freedom Week,” Hage said. “Our hope is to not only wrap in our founding documents, but also to wrap in those conversations about 9/11 so we don’t forget those that sacrificed their lives.”

Hage’s life was directly impacted by the 9/11 attacks as her husband, who was already serving in the U.S. military, was deployed to the gulf.

“I just think, as a teacher perspective, it’s important to make students aware of the effects these events had,” Hage said. “It’s important to have those critical conversations so that we remember that important part of our nation’s history.”