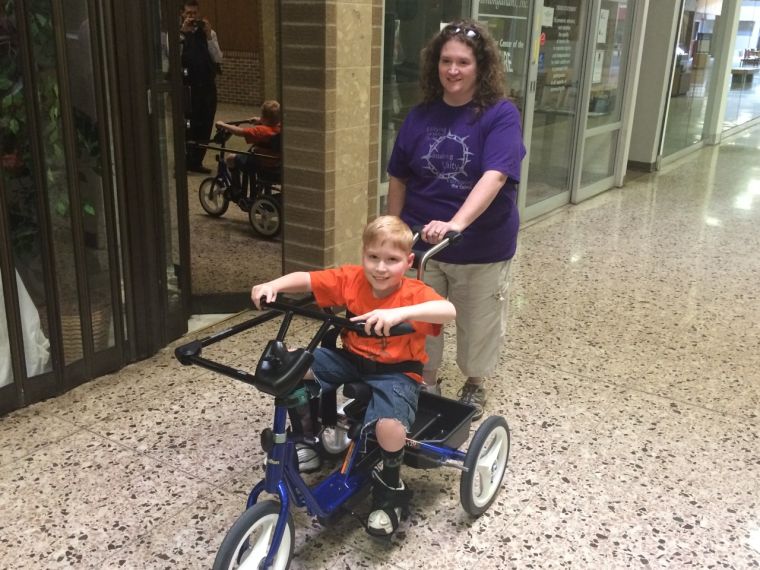 Noah, 9, and his mother Heather try out an adaptive bike during a fitting May 6 at the Mountaineer Mall in Morgantown. 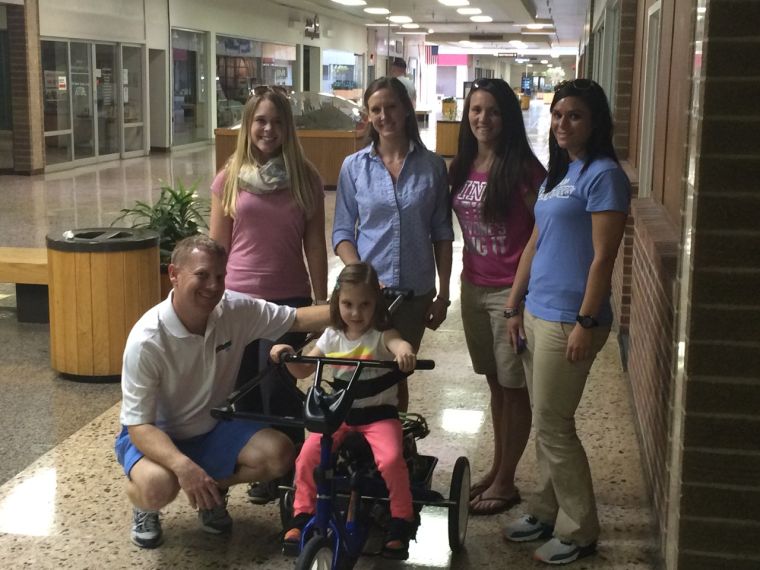 Lexi, 4, is shown with her mother Meloney and the staff of PlayWorks Child & Adult Therapies, a Variety adaptive bike-fitting partner. 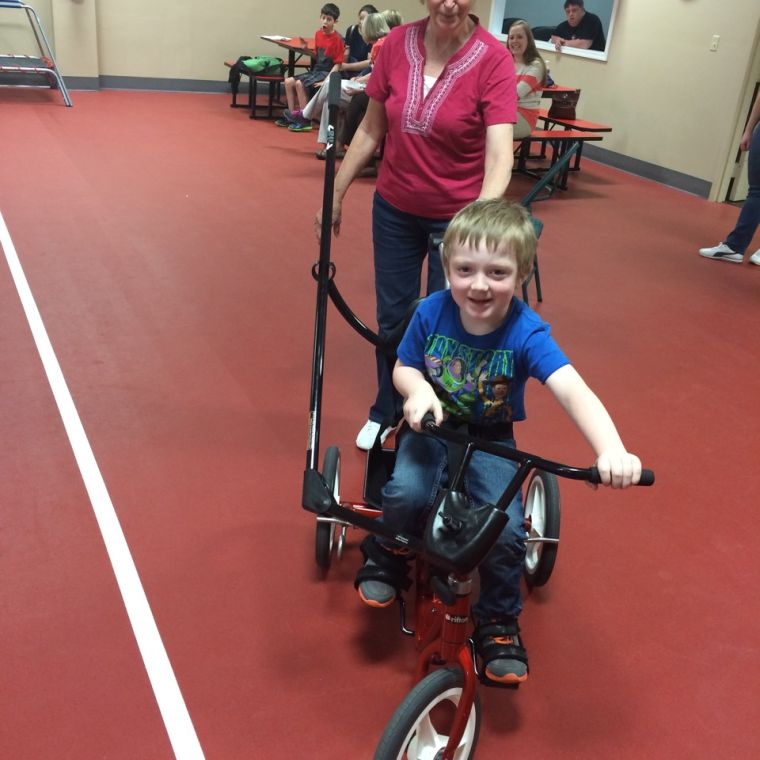 Thomas, 5, takes an adaptive bike for a ride around the gym at the Disability Action Center in Fairmont on May 6.

Noah, 9, and his mother Heather try out an adaptive bike during a fitting May 6 at the Mountaineer Mall in Morgantown.

Lexi, 4, is shown with her mother Meloney and the staff of PlayWorks Child & Adult Therapies, a Variety adaptive bike-fitting partner.

Thomas, 5, takes an adaptive bike for a ride around the gym at the Disability Action Center in Fairmont on May 6.

Most children remember their first bicycle.

They remember what color it was, how they felt when they mastered riding without training wheels, with who they rode with and where they went. They remember the feeling of being free, their hair in the breeze as they zoomed through their neighborhoods.

But for children with disabilities, those memories may not be part of their past.

Variety the Children’s Charity, an organization based in Pittsburgh, is working to change that.

Variety launched its “My Bike” program on November 2012, which helps children who can’t ride a normal bicycle by providing them with a customized tricycle that accommodates their limitations and allows them to ride with their friends and family.

“What I was hoping is that we could meet a very important need for the children and their families,” said Charlie LaVallee, CEO of Variety.

Parents apply online at Variety’s website and send in a letter of medical justification from a physical therapist or similar professional who can certify that the child will benefit from the bike.

Then, the child is fitted onto a bike, which gets different customizations depending on each child’s individual needs. The bike can be picked up about a month after the fitting.

While 19 percent of the families who apply are considered impoverished, the income guidelines are open to those who make up to $94,500 annually.

The bikes cost $1,800 to build and are paid for by local sponsors — area small businesses and organizations — so there is no cost to families.

LaVallee said he can’t decide who to watch when he sees children get on their bikes for the first time because their parents are often just as excited as they are.

He is a different person since the “My Bike” program started, he said.

“Their joy … I wish everybody could see their joy, because it changed me,” LaVallee said. “They’re so thrilled about receiving a bike. When you think about it, these kids, there’s so many things they’ve been told they can’t do and they won’t do and they’ll never do.

That sense of pride was true for Barbara Ray, a Farmington mother of two.

Her children, 4-year-old Ryan and 10-year-old Melanie Morrison, both have autism. They don’t socialize or make eye contact with other people, and they are nonverbal. They also have poor muscle tone and almost no hand/eye coordination.

“The therapist told me that Melanie and Ryan would never be able to ride a regular bike,” Ray said. “They don’t have the adaptive skills.”

When she heard about the “My Bike” program though the children’s doctor, she contacted the representative in Morgantown and filled out an application.

She took them in for a fitting the next day and got their bikes about a month later at Stepping Stones in Morgantown.

During Melanie’s fitting, she demonstrated an ability nobody knew she had and peddled the bike on her own.

“I cried, because it was just an experience I never thought I would ever see,” said Ray. “Now that they have their own bikes, we go to the rail trail.”

The family had no way of transporting the bikes, so Ray traded her car in for a truck that could carry them to Worthington Park.

The siblings race each other on the trail, and whoever is in front looks back at the other and laughs. Then, the other peddles faster to catch up.

It is the first time the children have ever interacted with one another.

Her children’s bikes give Ray and her family something they can do together, and the kids exercise and build up their muscles while riding.

The bikes keep Ryan and Melanie safe and are customized to allow them to ride easily.

Their feet are strapped onto the pedals, which work without applying pressure on them. Both have seatbelts and custom seats to hold the kids onto the bikes. There is also a handle in the back so Ray can control their speed and help steer from behind as they ride.

“It’s a wonderful opportunity to see your child ride the bike — be able to ride and know that they can do it,” said Ray. “It’s an awesome experience. You can get out as a family and get them to interact. There’s just so much.”

Children will receive and will be fitted for bikes June 13 at the Disability Action Center in Fairmont and again June 20 at Cornerstone Pediatric Center in Bridgeport.

To apply for an adaptive bicycle, fill out an application on Variety’s website www.varietypittsburgh.org/MyBikeProgram.asp or call the Variety West Virginia office at 304-400-8300.