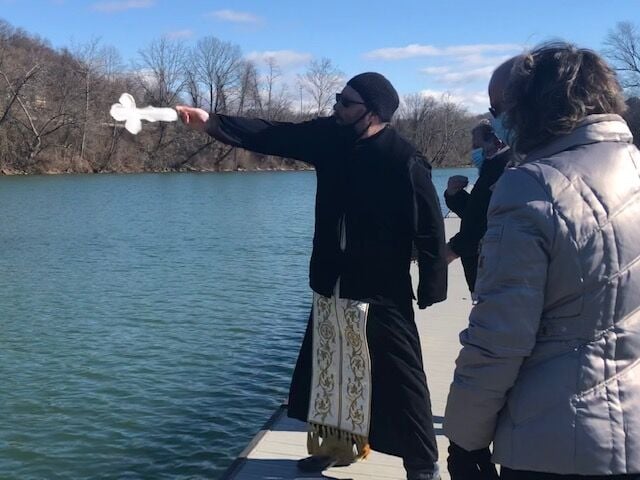 Parish Priest Sasha Nedich throws a cross made of frozen holy water into the Monongahela River Saturday at Palatine Park. 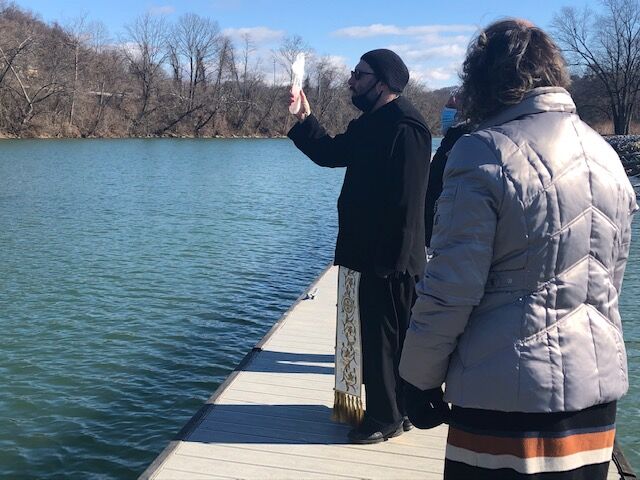 Parish Priest Sasha Nedich prays with a cross made of frozen holy water by the Monongahela River Saturday in the church's annual "Blessing of the River" service. 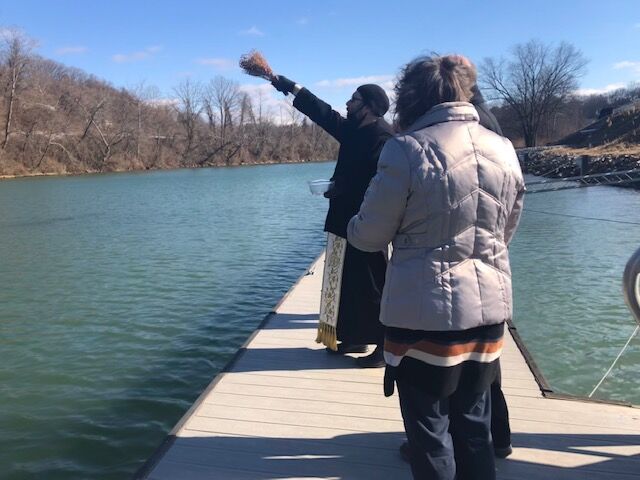 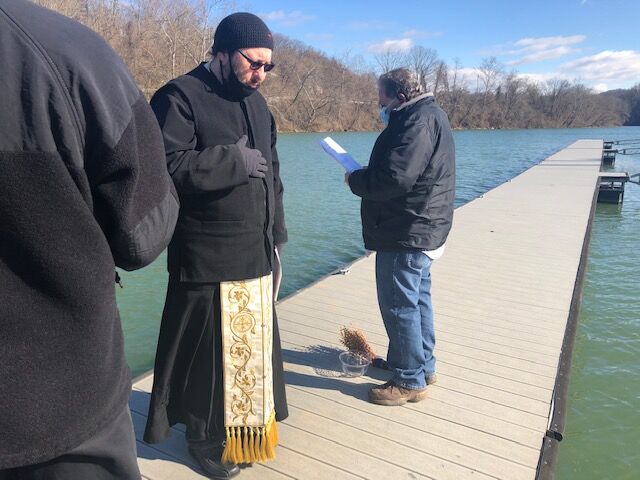 Parish Priest Sasha Nedich throws a cross made of frozen holy water into the Monongahela River Saturday at Palatine Park.

Parish Priest Sasha Nedich prays with a cross made of frozen holy water by the Monongahela River Saturday in the church's annual "Blessing of the River" service.

FAIRMONT — Along the banks of a cold Monongahela River, Priest Sasha Nedich blessed the waterway Saturday morning, a tradition that follows Christmas and Theophany, Christ’s baptism in the Jordan.

“At that time we usually bless water for our churches and our parishes and the tradition is to go to the local river and bless the river and thank God for everything the river and nature provides for us,” he said at the service, which was attended by about guests at Palatine Park.

It’s a double celebration of ecology and theology. He said it reminds the church to be mindful of what they are given. He said the ceremony was the shortened version given how Saturday’s cold weather.

“The longer version is more telling about tradition but you know how it is outside,” he said.

He said usually people of the church take holy water to their homes and bake it into things like bread. When they are sick, they partake of the bread for healing.

The month of January is full of celebration for Saint George Serbian Orthodox Church in Fairmont’s East Side. Nedich threw a cross made of ice into the river but he said traditionally the cross would be made of wood.

“It is thrown into the river and them someone goes, swims for it, and brings it back and receives blessings of the priest. There comes a little bit of superstition. It’s believed whoever catches the cross is going to have an extra good year,” he said.

Nedich said he’s never seen anyone get the cross. Nedich, who is originally from Croatia, grew up in Yugoslavia when the country was under communist rule, which prevented public religious services.

“The first time I witnessed this was when I came here to the U.S.,” he said.

The holy cross was made out of water that is blessed and so it dissolves into the water.

He also used basil to bless the river. He said basil is an imperial plant in that it means “czar” in Greek. Christ is king, so that is the significance of the basil.

The Orthodox Church is the Eastern side of the Christian church. Nedich said that the churches were all together until the 11th Century then the Eastern and Western side of the empire divided, which marks the origin of Roman Catholicism. Mostly Slavic countries are largely Orthodox in denomination, he said.

“That’s how it came here with immigrants. Although, Alaska used to be Russian so you might say when they sold it to the U.S. that’s the first the Orthodox who were in the U.S.A,” he said.

Nedich said the blessing of the river is mostly about thanksgiving. Being thankful for everything that was given to the people of the church. He said everywhere, cities and villages are built next to the river because the river is life giving.

“We bless everything and by blessing you are giving thanks to God and hoping what you give He will give you back sanctified,” he said.

Orthodox worshippers believe that the earth and animals were once in a more friendly state and they hope and pray that the Earth will go back to that state.

“That’s not some kind of magic. We hope that’s going to happen in the future, that it’s a better life. We just give thanks to God, to whatever he has given us and try to do better with those Earthly gifts,” said Nedich.