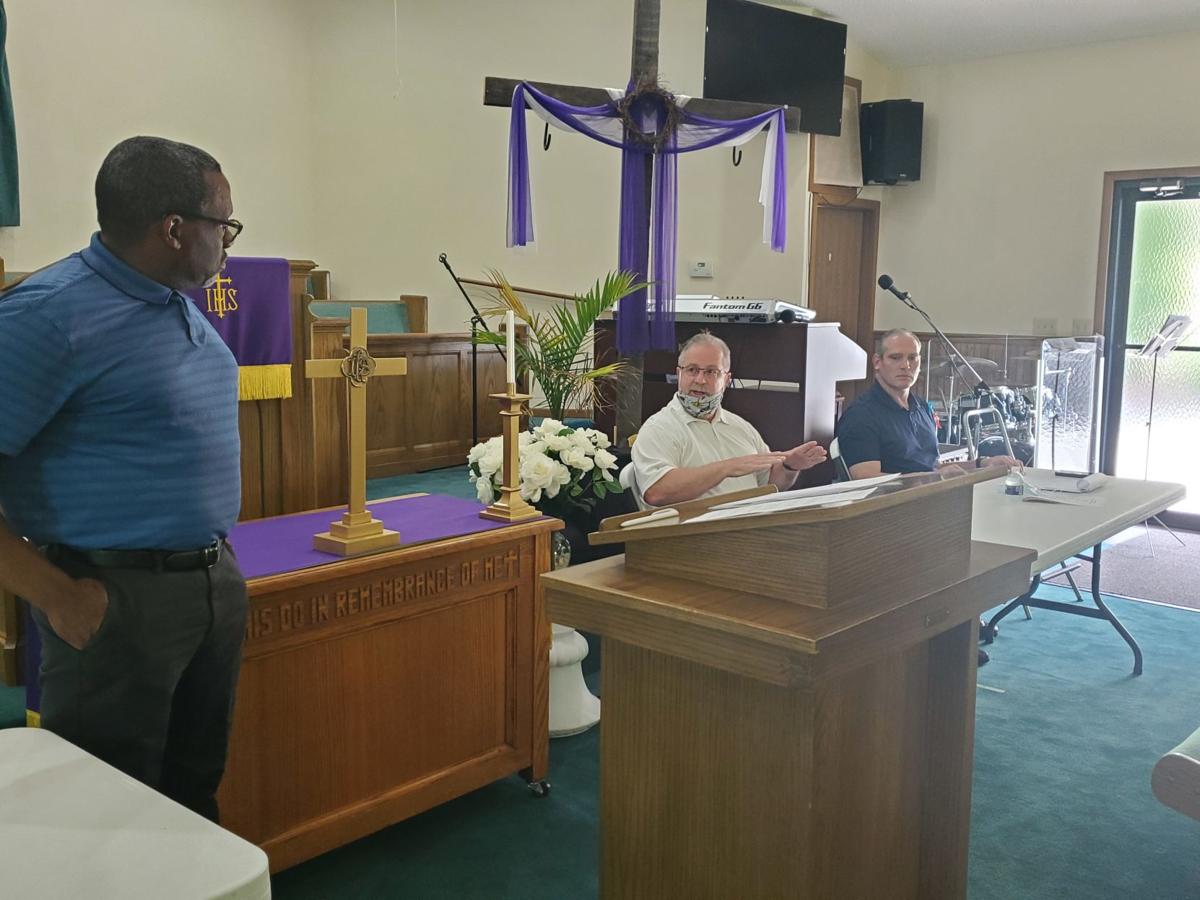 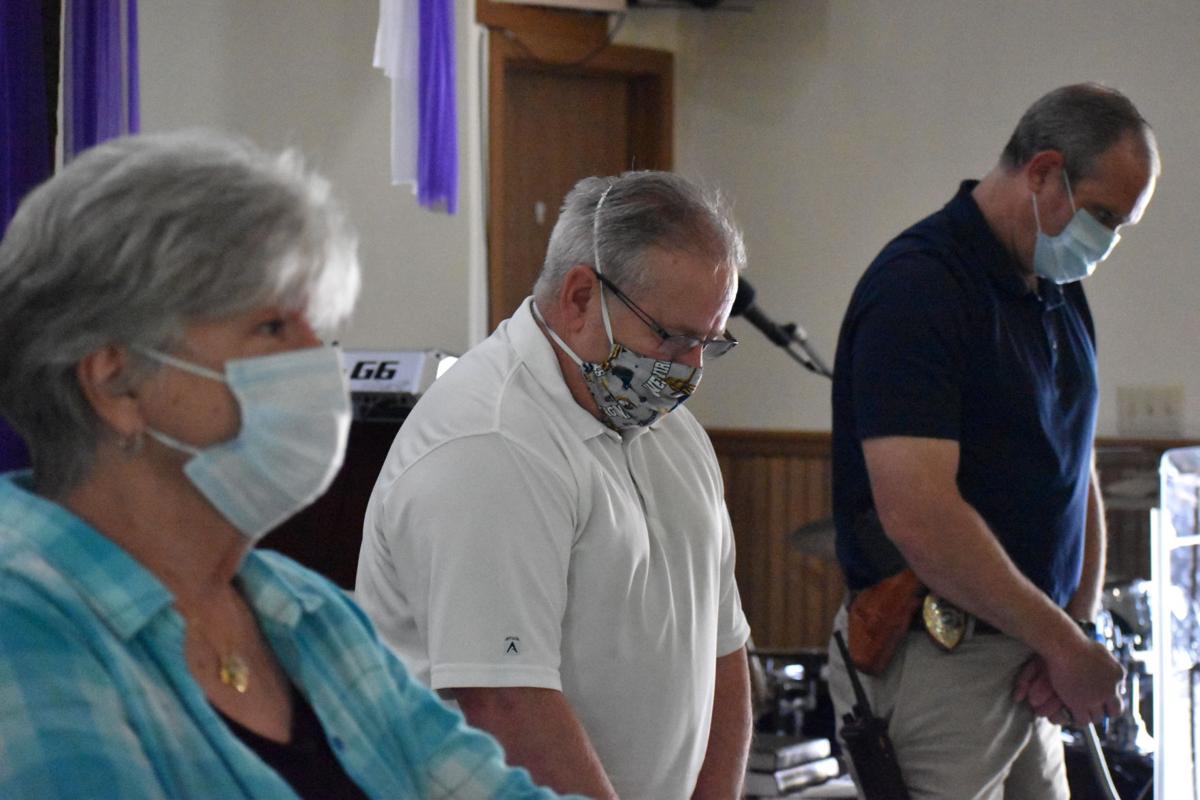 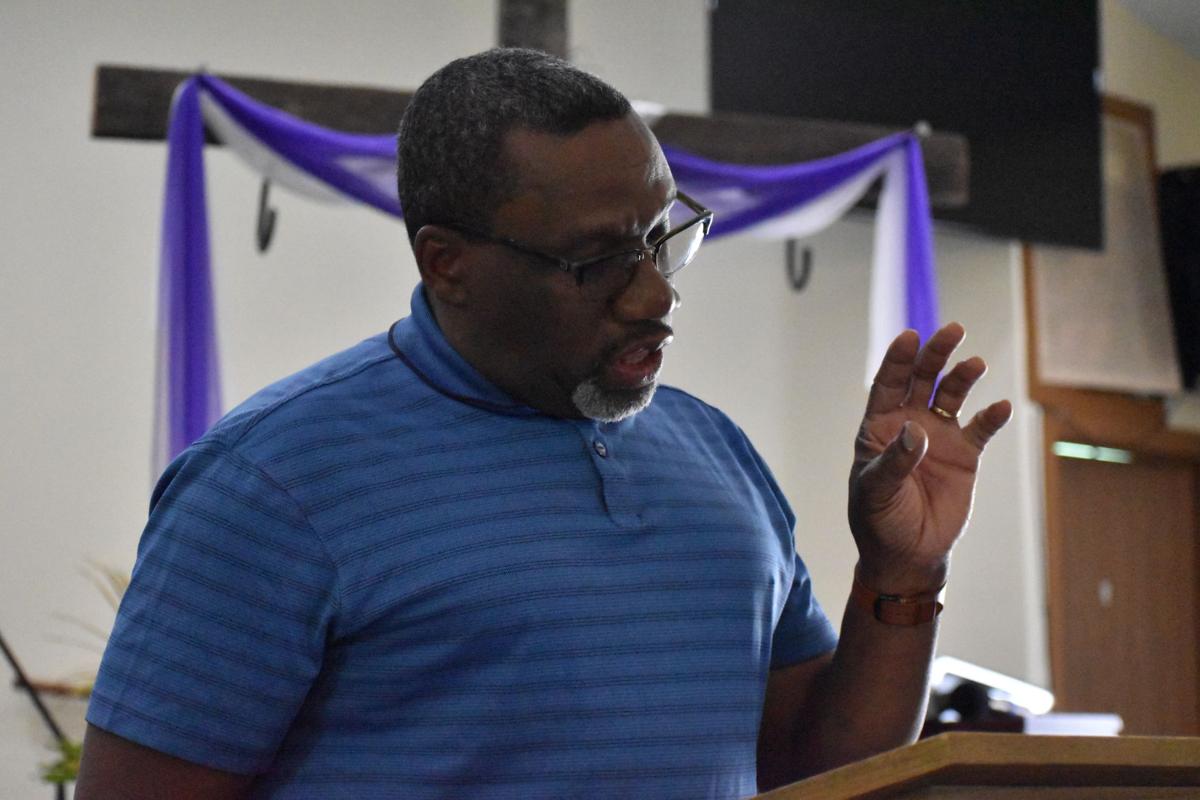 FAIRMONT — Marion County pastors joined forces with law enforcement and city leaders Thursday to continue a dialogue about social justice and change in the aftermath of the killing of George Floyd in Minneapolis and Rayshard Brooks in Atlanta.

Fairmont Mayor Brad Merrifield and Fairmont Police Chief Steve Shine joined with members of the Marion County Pastoral Alliance to discuss facets of police work such as chokeholds and other tactics, as well as systemic racism in general.

“We would like to see overall change,” said Mark Staples, pastor of Mt. Zion Missionary Baptist Church, which hosted the meeting. “We are hoping to look at all facets. Systemic racism doesn’t just hit law enforcement, but it’s education, higher education, school boards, employment, loans, thing of that sort.”

The Alliance is an outgrowth of several pastors’ wish to be involved in the demonstrations staged by local residents for Black Lives Matter. By bringing in Shine and Merrifield, the pastors wanted to be proactive to prevent any unnecessary police incidents from happening here.

“What we want to do is speak to our police department to see what their procedures are to help prevent something from happening here in Fairmont that has happened in some major cities,” said Pastor Leo Riley, of Agape Life Ministries. “Right now, we are not experiencing those problems, but we want to be forerunners in case something does happen, we have an outlet.”

Prior to the forum, Staples said he and other members of the faith community have been saddened by the deaths of Black individuals at the hands of police officers, which is why they wanted to get the conversation started with local law enforcement.

“We would be remiss for not mentioning those three names that sort of precipitated everything,” Staples said. “Ahmaud Arbery, Breonna Taylor and George Floyd. It hurt our hearts to see the eight minutes and 46 seconds.”

Arbery’s murder was captured on videotape in Brunswick, Georgia and was not being pursued as a murder until the shooting gained national media attention. Taylor died three months ago after plainclothes detectives in Louisville, Kentucky burst into her apartment to serve a search warrant. One of the three officers in that case has lost his job and no one is facing criminal prosecution. Floyd died May 25 after ex-cop Derek Chauvin in Minneapolis forced his knee to Floyd’s neck for almost nine minutes cutting off his airway.

Shine said he is disheartened by the lethal actions taken by police in the different deaths across the country. He condemned the actions of those officers who used deadly force, but said there are techniques officers are taught that are meant to be used in life threatening situations.

“I don’t think that any Supreme Court law or legal opinion gives them the leeway to take somebody’s life,” Shine said. “Officers are taught that if they’re in a situation where they’re in fear of losing their life, I don’t want anything taken off the table for them.”

He said officers are trained to de-escalate different situations in different ways, but it can come down to deadly force in certain situations. He said he tries to ensure his officers understand the standards they are held to in the department, so they understand what techniques.

“That’s through making sure the officers understand what is expected of them; that our first goal should be deescalation and not confrontation. If we can do that, that’s one of the major things we can do to stop brutality from happening in the first place,” Shine said. “I just want to make sure that everybody is aware that there are times that brutality is necessary in this job.”

This was one of the questions of Pastor Mike Little, of Good Hope Baptist Church in Barrackville. Little said he and other pastors want to know what standards Fairmont Police are held to.

“That’s the whole purpose is for us to come together and hear both sides,” Little said. “Get a better understanding of what’s expected from the community and then what we expect from the police officers.”

Staples said after the forum that the Pastoral Alliance would pursue any changes necessary to ensure the safety of all residents of Marion County. Merrifield said he and Fairmont City Council would also hear any suggestions for change at council meetings.

“We will abide by the rules that are made for us and we will make sure that it’s tidied up into our local language we can enforce,” Merrifield said. “The discussion the chief recommended I think is a very first step, then we can go from there.”

Riley said he would like to see the fear of local police departments be addressed as well, because it is one of the divides between officers and the public, particularly the Black community, he said.

“Removing fear on both sides is going to be equally important,” Riley said. “We need to, as young Black men and men period is not to have the fear of when you’re pulled over, and also for officers to not look at skin color and decide why they might be fearful.”

According to Shine, officers learn in the police academy and in other trainings how to best perform their duties without bias. He also said he would be open to having more sensitivity training implemented in Fairmont.

“There is nothing systemic we teach that involves taking actions against somebody negatively,” Shine said. “Any actions we take shouldn’t be based on the color of your skin, sexual orientation, anything like that.”

Riley, Little and Staples said as Black men, they have all been in situations where they believe the color of their skin influenced police action, although luckily nothing that involved the use of force. However, Staples said he wants to see this issue cease to exist.

“As African American men, we have been stopped as well,” Staples said. “We all have stories and if you sat down and have coffee with us, we would agree that we’ve got some stories where we have felt that we were stopped and it was an inappropriate stop.”

Riley said keeping the names of Arbery, Taylor and Floyd alive is important to enact change based on their untimely deaths, and it is what he hopes to see come to fruition.

“One of our goals is to keep this going and not to once this ends, to end it all together,” Riley said. “We want to keep a place of unity in this community, both with our Black brothers and white brothers and whomever.”