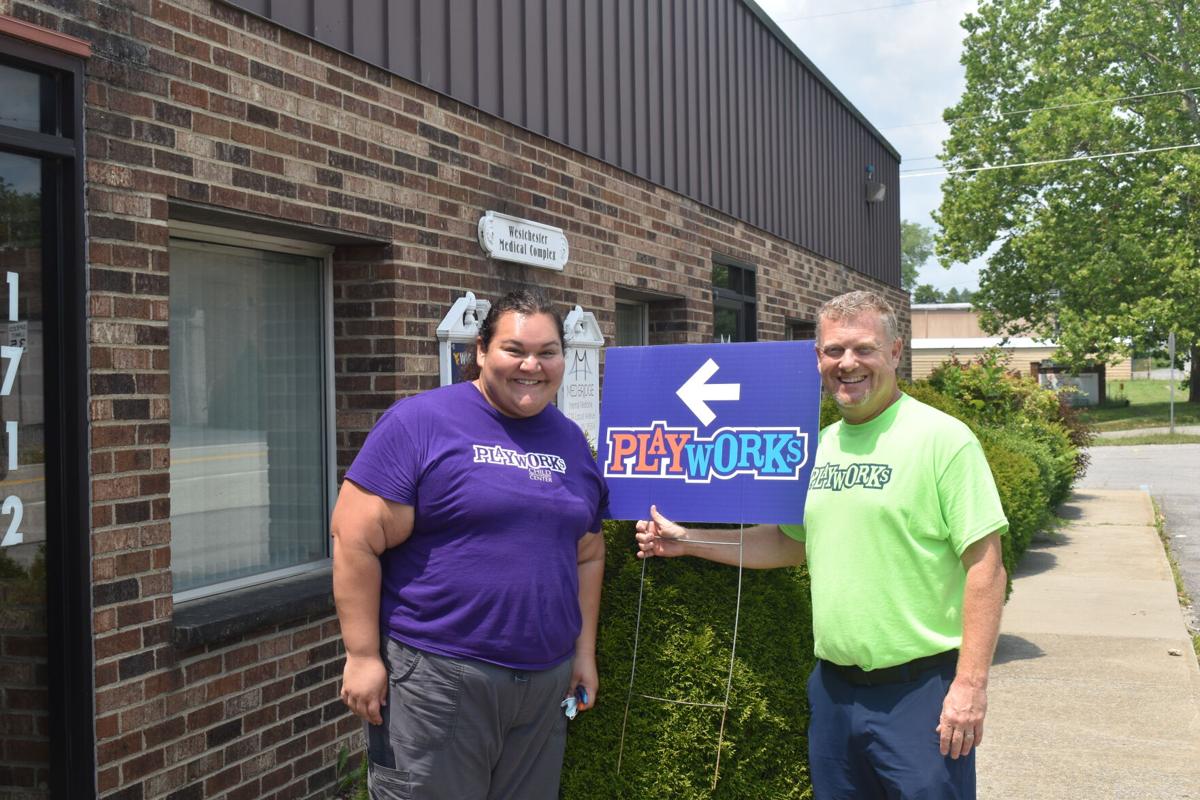 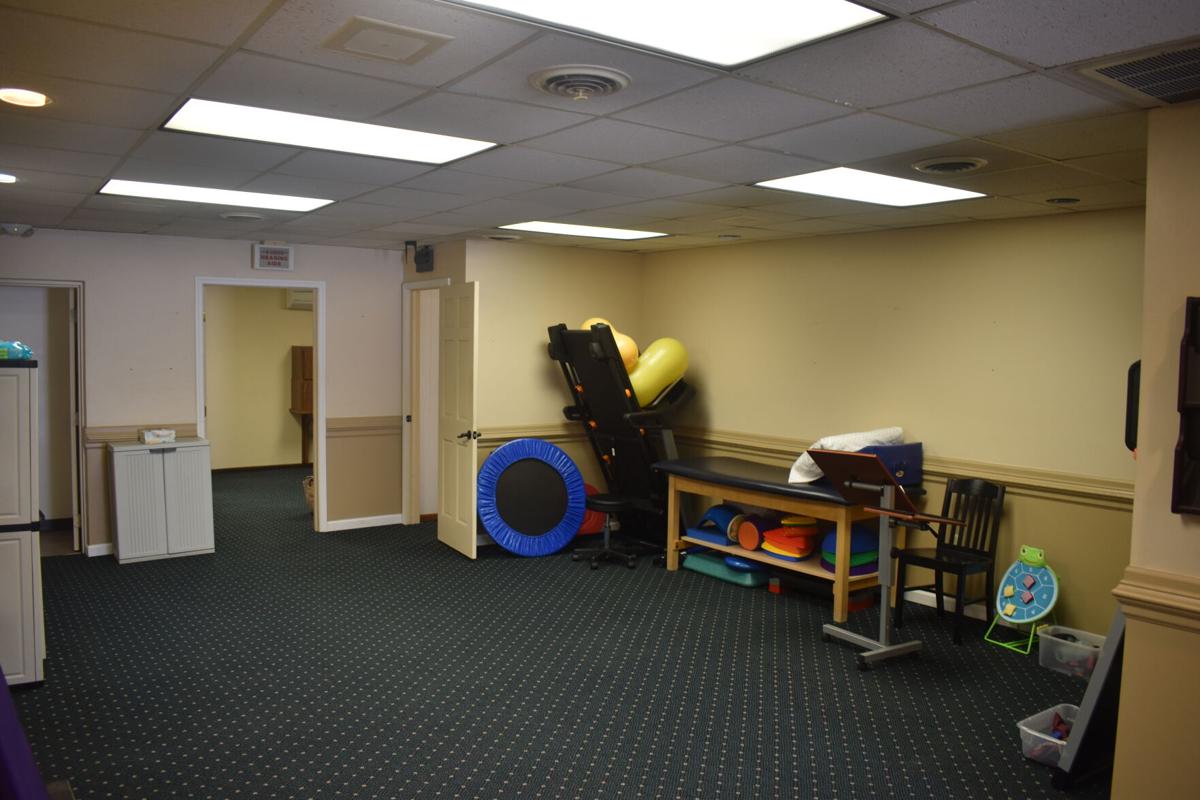 While the larger gym is under construction, the entrance area is being used as a make-shift gym for PlayWorks' current clients. 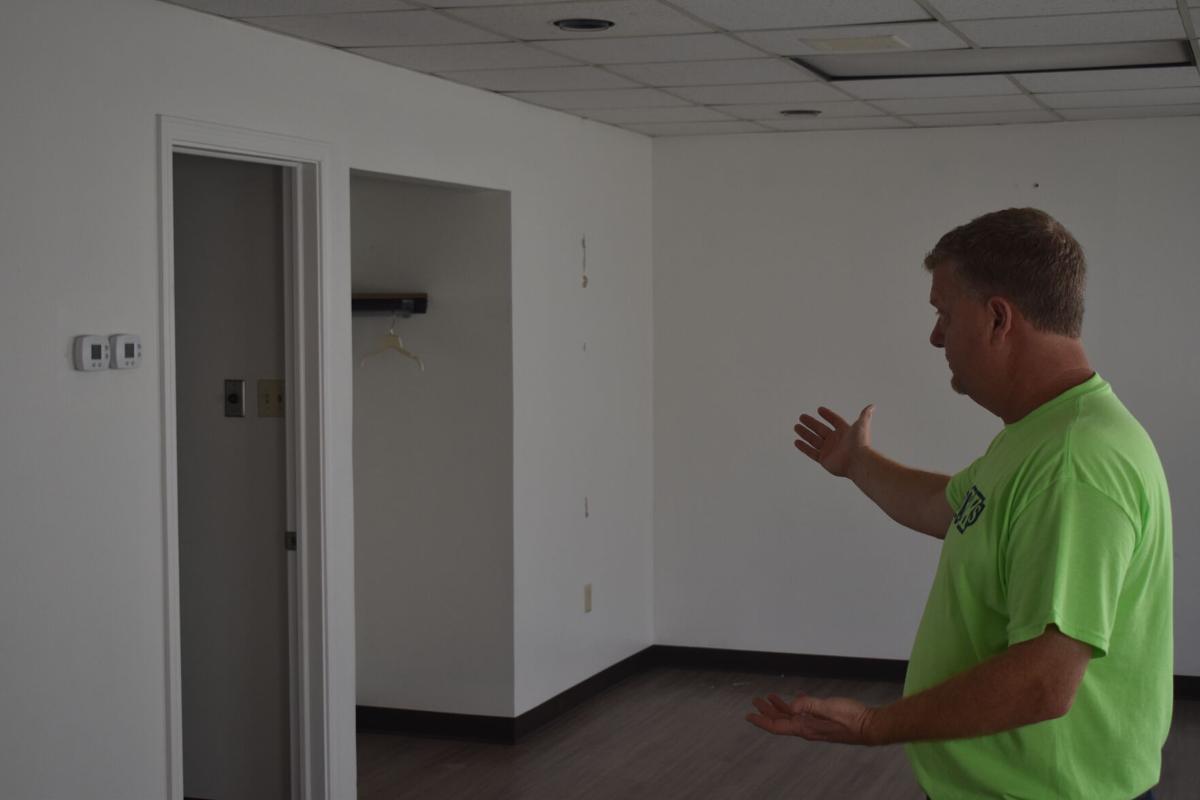 Mike Lentz points to where the new gym will be. He and his staff will have to knock down some walls and raise the ceilings to make it work.

While the larger gym is under construction, the entrance area is being used as a make-shift gym for PlayWorks' current clients.

Mike Lentz points to where the new gym will be. He and his staff will have to knock down some walls and raise the ceilings to make it work.

FAIRMONT — A company that provides various types of special therapy services to children is expanding.

Until recently, the Morgantown-based PlayWorks’ Fairmont branch operated out of the Disability Action Center. Due to the recent major flooding that struck the DAC, many of the rooms and facilities PlayWorks used in the building were left damaged and unusable.

However, PlayWorks was already planning to expand to a new location, according to Mike Lentz, owner of PlayWorks.

“We did outgrow the space we had at the DAC. They were fantastic partners; we would’ve stayed there forever had we been able to carve out more space,” Lentz said.

PlayWorks describes itself as a place that provides children, “A safe, encouraging and most importantly fun place to grow.” They provide services to mentally and physically disabled individuals, such as speech therapy, physical therapy, occupational therapy and preschooling services.

PlayWorks’ move was originally planned to happen much later, likely around Labor Day. However, due to the unforeseen flooding, the plans were expedited and PlayWorks was able to begin moving into the new building on Locust Avenue earlier than planned.

Many of the activities and programs PlayWorks runs require specialized facilities. In spite of this, PlayWorks is moving forward with their relocation and holding a soft opening.

Lentz and his team have big plans for the new, 5,800 square-foot building, which previously served as two doctors offices. One side of the facility, previously occupied by a WVUMedicine physician, will become the therapy wing.

The other half of the building, previously a branch of MedBridge, will become a large indoor gym area.

Next to the gym will be a full-scale apartment to be used as a Activities of Daily Living workshop. This will be used by some of PlayWorks’ older clients and show them how to complete many basic life skills.

The ADL workshop will require a full kitchen, bedroom and other basic living spaces. As of now, there is much work to be done, walls that need to be torn out and ceilings that need to be raised.

“But we’ll get there. We’ll have a full ADL apartment inside [the new location],” Lentz said. “We’ll also have a larger physical therapy gym. That will help immensely with some of the things we do.”

The new location at 1712 Locust Ave. had its soft opening June 6. The Fairmont branch will be building back up to full operation over the rest of the summer. For now PlayWorks’ staff continues to see their regularly scheduled patients. Lentz is planning a grand reopening event around the time school starts back in session.

“We’re going to do a big open-house, ribbon-cutting ceremony somewhere around back-to-school time,” Lentz said. “For now, we’re just going to do a soft opening, seeing what we need and kind of fixing things up as we go so we can have a big event for our clients.”

This move has been in the works for a while now. The Fairmont PlayWorks staff loved working inside the DAC, but space was becoming a restriction on how many people their services could help. To say they’re excited to have a full building to call their own is an understatement.

“I think we’re going to have a lot more space to work with clients who need their individual space,” said Karissa Gutierrez, an occupational therapist with PlayWorks. “We get to have an all-inclusive spot for the kiddos in the area, I’m really excited about that.”

Lentz and his PlayWorks team are passionate about their work, and it won’t take long to get the building into the shape that’s perfect for them and their clients

“We’re going to make it into our own home,” Lentz said.

“We’ll get to have needs met with new equipment, new spaces and new routines,” Gutierrez said. “Being able to offer new things we couldn’t in the old space for our clients to help them get their independence.”

For information about PlayWorks and their services, go online at playworkscdc.com.