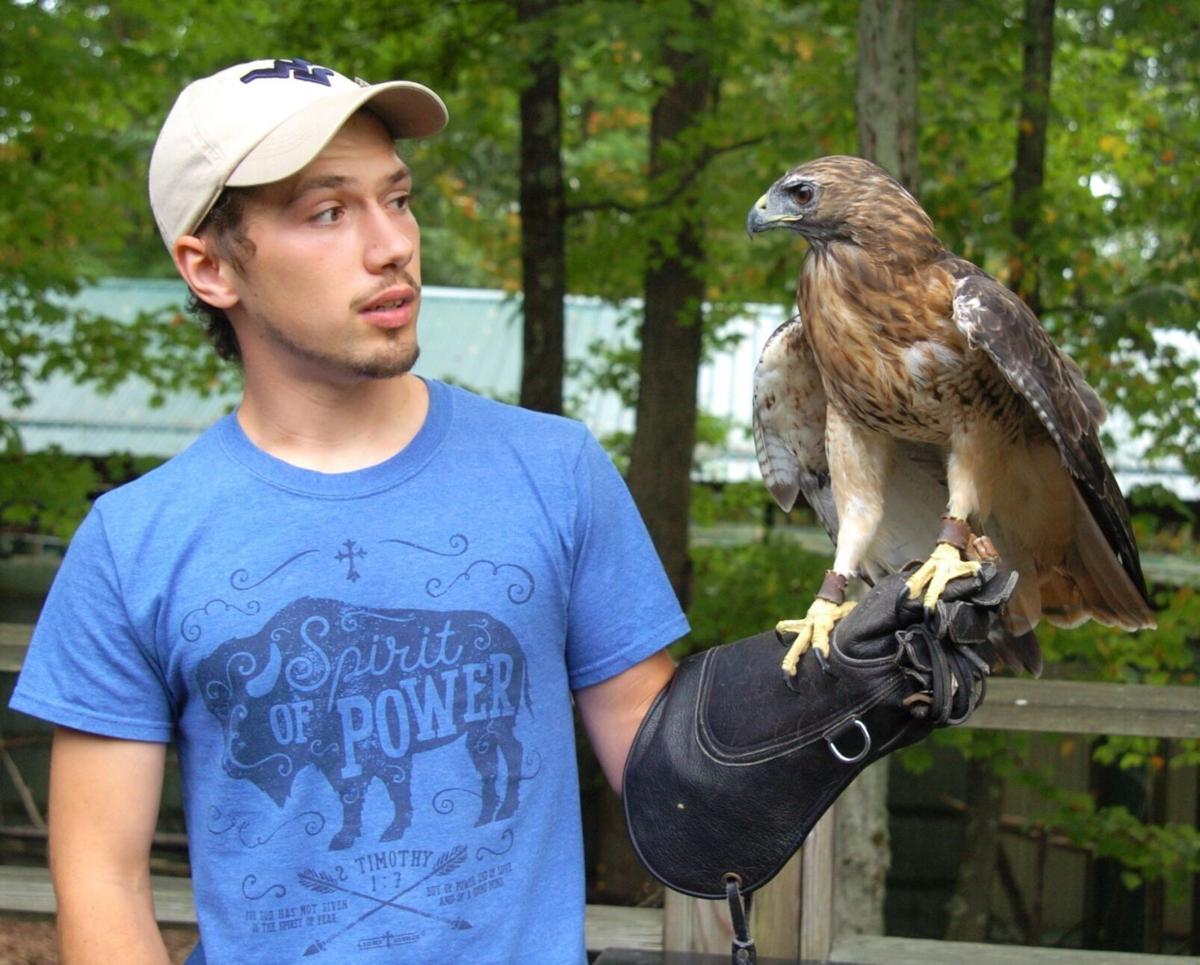 Collin Waybright is the new director of the West Virginia Raptor Rehab Center on Bunner Ridge Road. He is shown here with Rico a red tailed hawk. 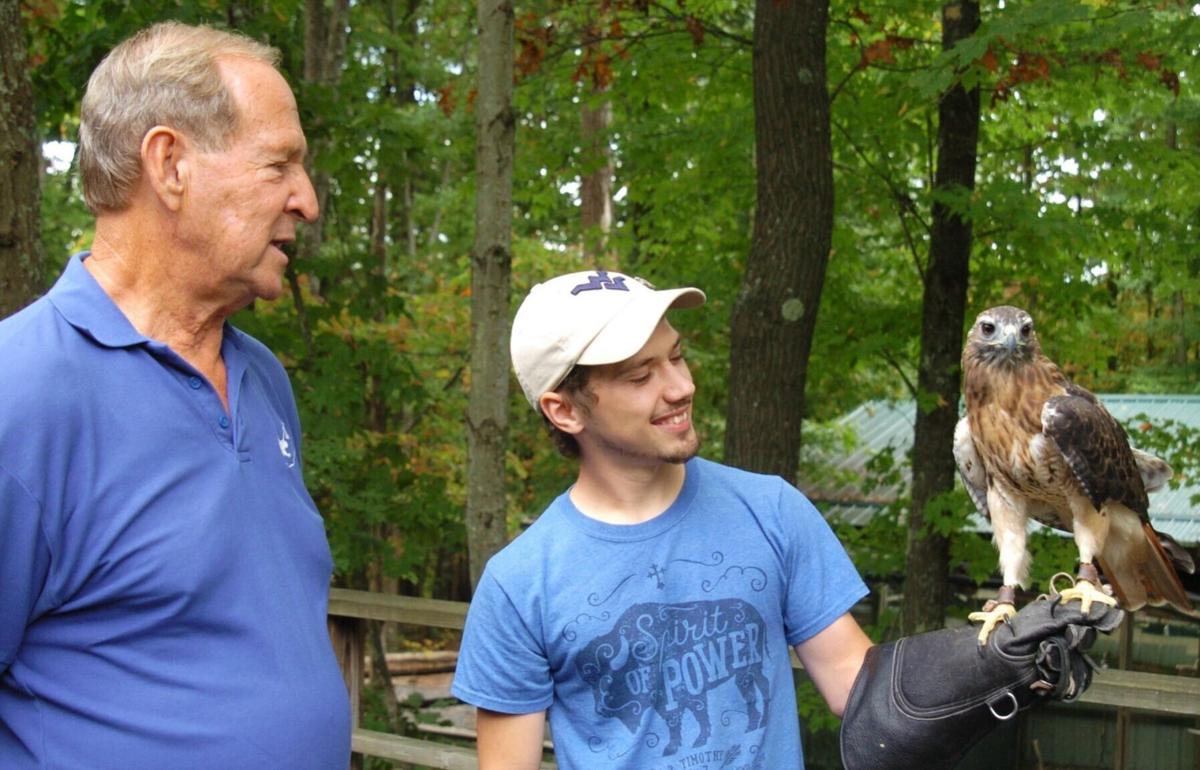 Mike Book, left, stepped down Wednesday as director of the West Virginia Raptor Rehab Center on Bunner Ridge Road in Fairmont. At right is his successor, Collin Waybright, and his friend Rico, a red tailed hawk, also shown below.

Collin Waybright is the new director of the West Virginia Raptor Rehab Center on Bunner Ridge Road. He is shown here with Rico a red tailed hawk.

Mike Book, left, stepped down Wednesday as director of the West Virginia Raptor Rehab Center on Bunner Ridge Road in Fairmont. At right is his successor, Collin Waybright, and his friend Rico, a red tailed hawk, also shown below.

FAIRMONT — Mike Book has been the face of the West Virginia Raptor Rehabilitation Center since 1983, but he is happy to hand over the keys to a new director.

“I can kind of retire a little bit,” Book said on Wednesday when Collin Waybright, 21, accepted the director position. “I wasn’t much older than Collin when I started doing this,” Book said.

Book had been a wildlife biologist with the West Virginia Division of Natural Resources at the McClintic Wildlife Station in Mason County.

“It was a district office but it was on a wildlife refuge, and I started rehabbing some birds there.”

When Book was transferred to the DNR district office in Fairmont, he continued to work with injured birds. “I had more birds and I needed some help, so we started the organization in ‘83.”

Since then, Book has been on countless calls in the middle of the night to rescue raptors. “All the birds we get are orphaned, sick or injured,” Book said. “Most are injured. The number one thing is they’re hit by cars.”

It was the endless calls, not working with the birds, that finally gave Book the incentive to hand over the reins. “You get tired of the phone calls,” Book said. “Someone hits a bird at night, and I get a call. We would be out at dinner, and I’d have to excuse myself to take a call. But I always answer the phone.”

After being a key player with the center for so long, Book won’t go too far. “He’s definitely going to be around,” Waybright said.

But Waybright is certainly qualified for the job. “I’m a falconer. I fly hawks and hunt with them. The year I got into falconry with my first bird — his name’s Ace — I ran into some issues with weight control, and I called Mike and he helped us out with that.”

At the time, Waybright was learning falconry through someone else who was not available for the story.

“It was 2014, and I didn’t know what to do,” Waybright said. “I was having trouble with how much I was feeding [Ace], so I called Mike. And he said just feed him more.”

Waybright has been a raptor center volunteer since then. The center currently has an owl and a red tailed hawk, although they recently released several birds. “We had about 38 different birds. We had eagles, screech owls, falcons, several varieties of hawks and vultures,” Book said.

Rico, the red tailed hawk that lives at the center, was a juvenile when he was found injured and brought to the center.

“He had his juvenile plumage,” Waybright said, “so that’s how they knew how old he was.”

Rico did not yet have his red tail, so they were able to determine that the hawk was less than one year old.

“He’s one of my most photogenic birds,” Waybright said. “He knows that he is a pretty bird.”

Rico won’t be released into the wild because of an injury that prevents him from being able to hunt. “Collin’s analysis in the end, if he can’t catch a squirrel — because squirrels go up trees and they have to be able to fly up — if he can’t fly vertically, he’s not going to survive,” Book said.

After working with Rico for several years, Waybright realized that the hawk is not interested in hunting.

“I worked with him in falconry for about three years, but he only caught two snakes and a muskrat during that time,” Waybright said. “And he was very proud of that muskrat.”

Rico accompanies raptor center volunteers to educational programs, and has become quite the companion to Waybright.

“Rico’s been with me all over the place,” he said. “I moved to Kentucky and worked at a zoo for a bit and he came with me.”

Birds at the center usually live longer than birds in the wild because “they don’t have to worry about where they get their food, and that cuts down on their stress,” Book said. “We had a red tail for 25 and a half years,” he said.

“We saved money for 28 years to pay for [the raptor center],” Book said. “We got money from donations, individual donations. We would do an educational program, and people would give us a couple hundred dollar donation.”

The raptor center opened its location on Bunner Ridge Road in 2013, and is known for its educational programs.

Alan Robert Romine, D.O., of Clarksburg, WV, passed away on October 13, 2021, surrounded by family. Alan was born in Elkins, WV. Alan was a Vietnam War veteran and served as a medic in the Armed Forces Medical Service 4th Division at the Eighth Field Hospital from August 1970 through October…

JAMES A. FOX James Albert Fox, 82, of Belington, WV died Thursday, October 14, 2021 in West Virginia Caring Hospice Center in Elkins. He was born December 16, 1938 at Littleton, WV, a son of the late Albert Fox and Wilda Kirkpatrick Fox. Jim formerly worked as a pipefitter and a welder and w…