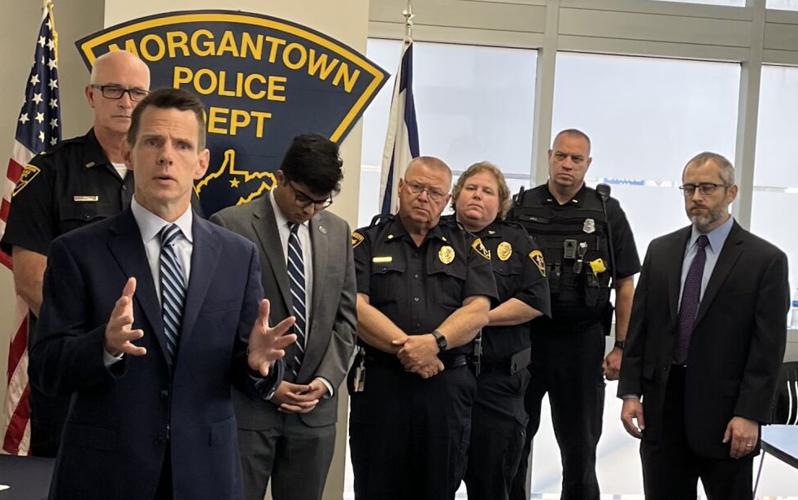 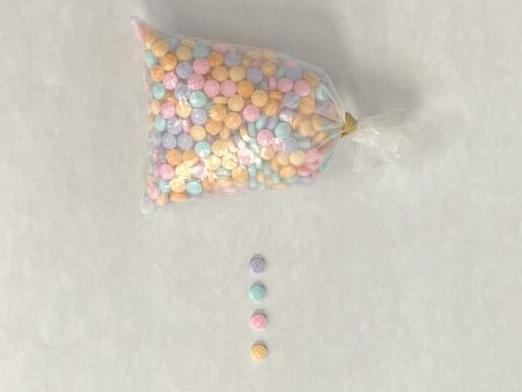 Candy-colored fentanyl in pill form was seized in Morgantown by the Mon Morgantown Drug and Violent Crimes Task Force last week. The pills were likely from Mexico, officials said. 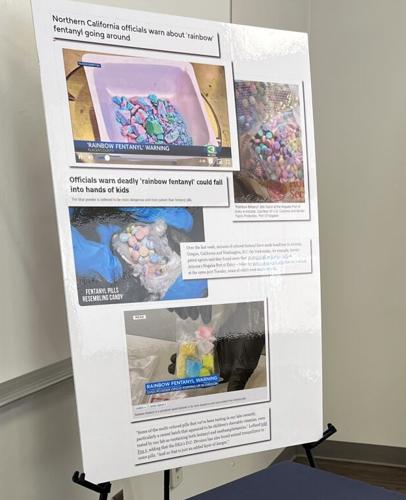 Rainbow “candy-colored” fentanyl in pill form that was seized last week was on display at the Aug. 24 press conference.

Candy-colored fentanyl in pill form was seized in Morgantown by the Mon Morgantown Drug and Violent Crimes Task Force last week. The pills were likely from Mexico, officials said.

Rainbow “candy-colored” fentanyl in pill form that was seized last week was on display at the Aug. 24 press conference.

MORGANTOWN — Members of the Mon Morgantown Drug and Violent Crimes Task Force removed one pound of candy-colored “rainbow fentanyl” from the streets last week, according to U.S. Attorney William Ihlenfeld for the Northern District of West Virginia.

On Wednesday morning, members of the task force and Morgantown Police Department and Ihlenfeld held a press conference to discuss the incident and how fentanyl is being presented to the public. While law enforcement did not provide an estimated street value of the fentanyl, they said around 15,000 pills were seized.

“The Morgantown Police Department truly recognizes that this is a very impactful thing that’s occurring within our communities and we’re really trying our best and working our hardest to make sure that we stop it from happening to a greater degree,” Morgantown Police Chief Eric Powell said.

The pills that were seized were stamped with M/30, like a conventional oxycodone pill, and are believed to be from Mexico, then smuggled into California, before making its way into West Virginia. The fentanyl in pill form is some of the best quality they have seen and their candy color makes them deceptive, Ihlenfeld said.

“These pills are part of a new trend that we’re seeing in that they are candy colored. ... Which is just another marketing tactic of the cartels, to deceive the public into thinking that these pills are something that they’re not — that they’re safe to take, that they’re oxycodone when actually they’re not. They contain some quantity of fentanyl, what that amount is, it’s hard to tell, right? The user doesn’t know exactly what he or she is taking,” Ihlenfeld said.

Officers also seized cocaine, crystal methamphetamine and powdered fentanyl during the incident. Ihlenfeld said charges will be announced in the future.

Ihlenfeld said federal officials are focused on stopping the spread before it gets to West Virginia and other cities around the state. Because Morgantown is a college town, it is targeted by the cartel, Ihlenfeld said.

“The word of the day is deception. The cartels are very good at this — they are deceiving the public in order to make profits and the profits they make are spectacular.Their marketing efforts are brilliant, as much as I don’t like to give them credit, they really know how to market to people here in America. Those cartels are our enemy, and we have to know what they’re doing, so we can respond accordingly and support people in our family and in the community,” Ihlenfeld said.

Azeem Khan, co-chair of West Virginia University’s Mountaineer Fentanyl Education Task Force, also discussed what the university is doing to prevent drug incidents. Khan said WVU students are an easy target. Khan said that he has heard from many students that they want to get high, but they don’t want to die and the reality with fentanyl, or any counterfeit pill, is that you might.

“We’re working hard every day to try and educate our whole community here about just how dangerous it is. Last year, over 70,000 Americans died from fentanyl poisoning, which is enough to fill all of Mylan Puskar Stadium and almost fill up the Coliseum, as well. So, it really puts it in perspective — just how dangerous this drug is,” Khan said.

Ihlenfeld said that to keep safe, don’t consume anything that isn’t from your doctor or pharmacist.

“I think we should assume and what you would say to someone who you think might be more likely to seek out a pill like this, that if you’re getting a pill from someone other than your doctor, other than a pharmacy, just assume that it contains fentanyl in it,” Ihlenfeld said.