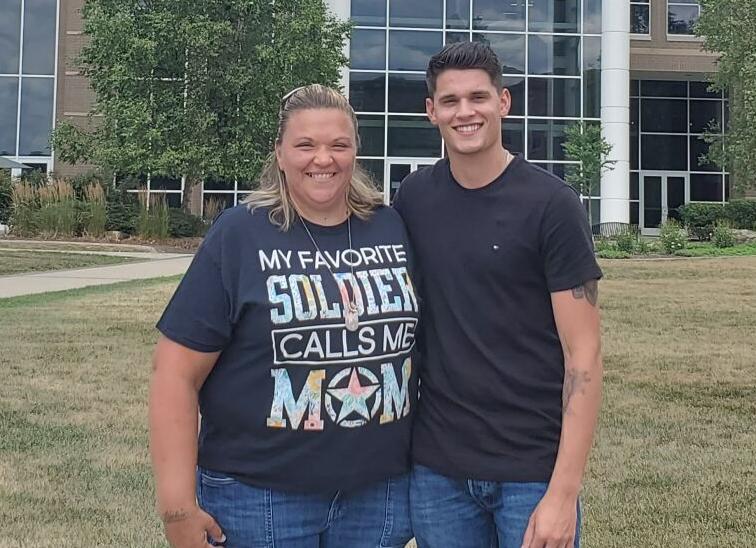 Nancy Stahl, left, stands with her son Kenneth Stahl on Fairmont State University’s campus, where Kenneth will be pursuing a bachelor’s degree now that he is home from serving in the National Guard. 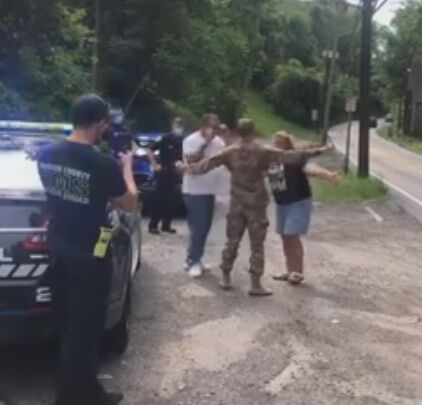 A still from the video of Kenneth surprising his parents shows him extending his arms to embrace his mom and dad, after exiting a police car.

Nancy Stahl, left, stands with her son Kenneth Stahl on Fairmont State University’s campus, where Kenneth will be pursuing a bachelor’s degree now that he is home from serving in the National Guard.

A still from the video of Kenneth surprising his parents shows him extending his arms to embrace his mom and dad, after exiting a police car.

FAIRMONT — Nancy Stahl and her husband were going to the grocery store this past Saturday to pick up some food for a barbecue when a police car pulled them over.

They were asked to exit the vehicle, and what Nancy saw next made her scream.

"I had no idea, all I thought I was doing was getting pulled over for a speeding ticket," Stahl said. "When the cop came up to the door, he said 'We smelled something on your car and we're going to ask you guys to get out.'

"I was mad I was looking down to the ground, I look up and there went Kenneth, and I flew."

Kenneth McDaniel Stahl is Nancy's son who had been deployed in Kuwait where he served as a private in the National Guard for 11 months. He was able to return home early after being admitted to Fairmont State University. A video showing him surprise his parents while coming out of the police car has reached more than 350,000 views on social media.

"My mom was still freaking out about what was happening, and until she realized she saw me," Kenneth said. "I thought my dad was about to get tackled because she came running to me pretty hard.

"I didn't expect my mom to scream like that. I knew she was going to cry, but when she screamed like that I was like 'Oh God.'"

Having been away for nearly a year, Kenneth said it was difficult to see his mom sad when they had to hang up from their calls. Now that he is back in the U.S., he reflects on those sad goodbyes.

"I was really excited to see my family," Kenneth said. "Every time I would call my mom, FaceTime her and had to let her go, you could kind of tell she was upset. I definitely knew she'd cry off the phone."

Nancy admitted she was sad from having her son so far away, although she believed he was doing well for the country.

"Every time he would hang up, I would just be really upset and cry," Nancy said. "It was very sad and upsetting, but I knew he was doing something for our country, so it was well worth it. I missed him a lot."

Kenneth said he was able to come home early because he was accepted at Fairmont State University. A graduate of North Marion High, he previously attended school at Glenville State College, but joined the military after believing it was a better option.

"Originally I wanted to go to college for football, and I did, I went to Glenville," Kenneth said. "I realized that's not for me, so I said 'You know what, let's try another part of my dream.' That's when I joined the military."

"I was in Kuwait for like two days, then I went up to Iraq for about five, six months. Then I was up in Syria a little bit, and after that I finished up in Kuwait," Kenneth said. "While I was over there I had a lot of time to think, and I thought education would be a great opportunity."

Having been through so much, Kenneth said he is just glad to be back home. While he will still be serving the National Guard in the months and years to come, right now, he wants to focus on the good he can do at home.

"I'm just really glad to be home again," Kenneth said. "I can't wait for my other guys to get back too."

Nancy, too, said she is just glad to see her son again, and is looking forward to seeing the journeys he embarks on from here on out.

"Just excitement that he is home safe," Nancy said. "He's home and he is safe, that's all that matters. He's home and safe in my arms."