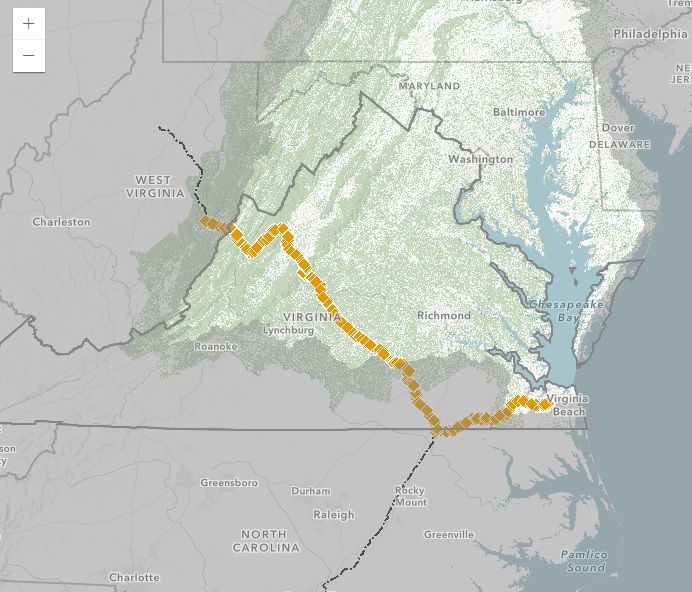 The orange line in this map shows the planned path of the now-halted Atlantic Coast Pipeline. 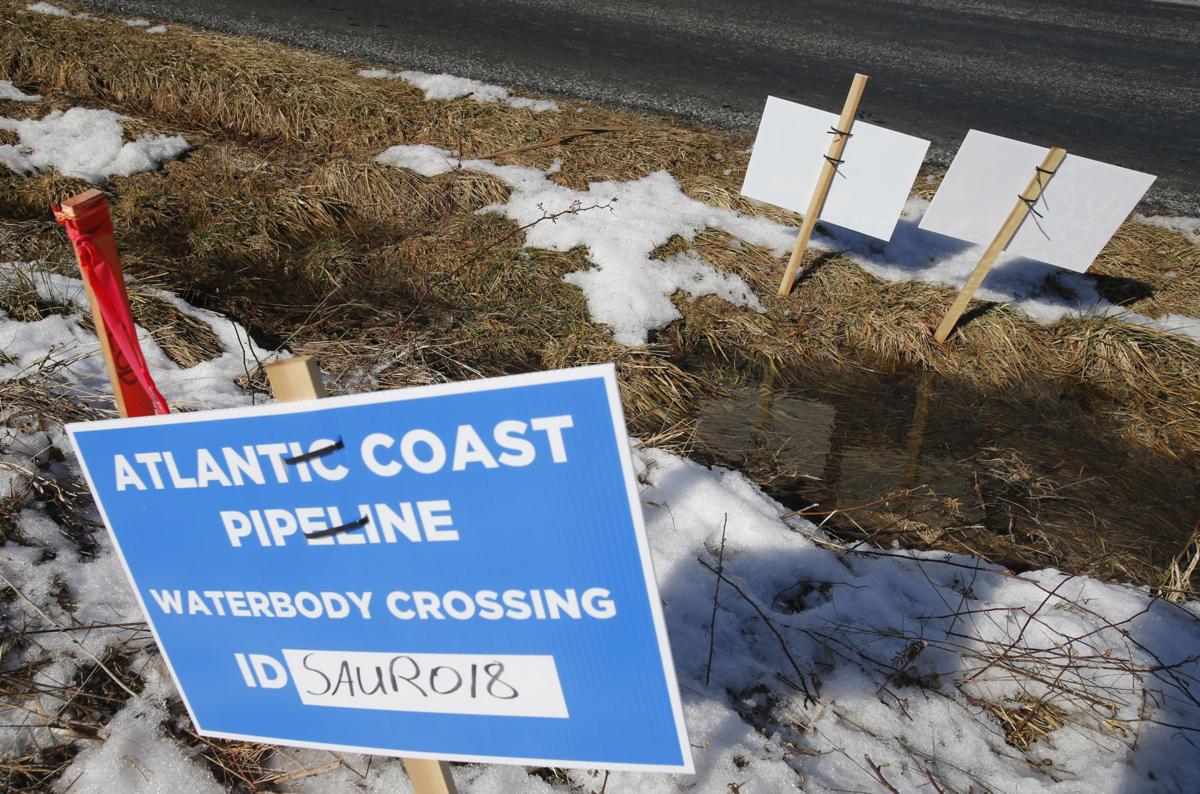 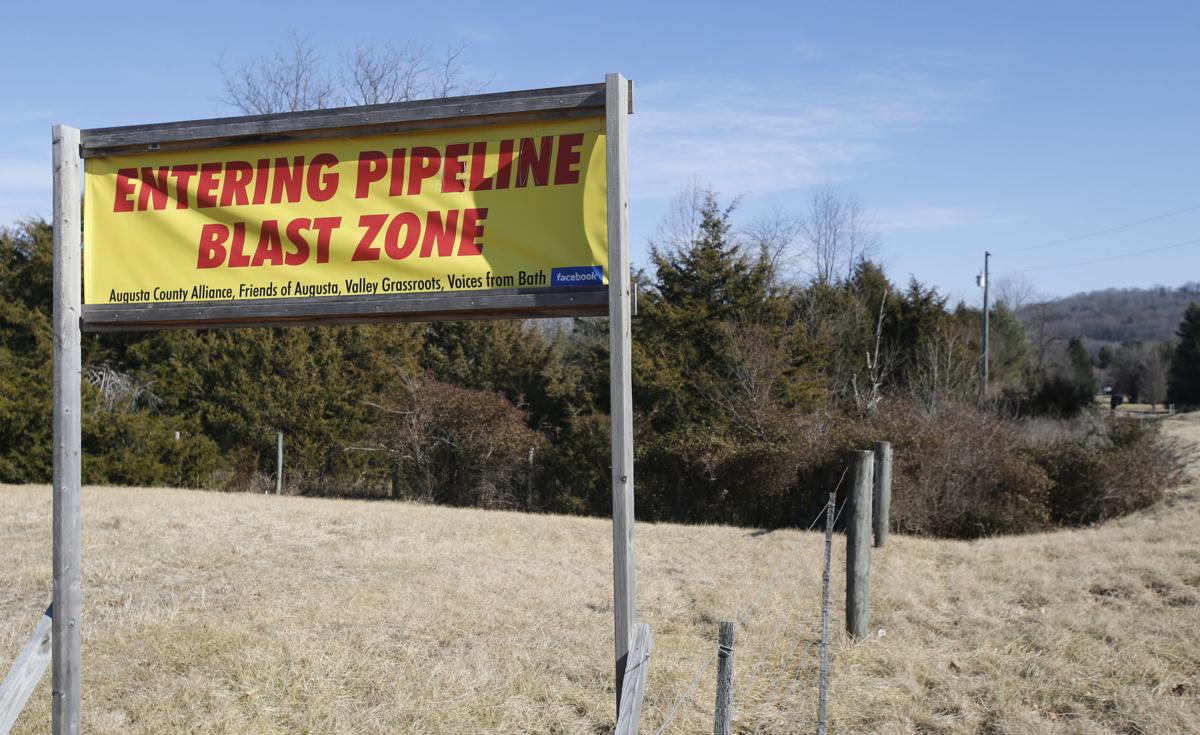 The orange line in this map shows the planned path of the now-halted Atlantic Coast Pipeline.

CLARKSBURG — When Dominion Energy and Duke Energy, the developers of the Atlantic Coast Pipeline, unexpectedly announced last week the cancellation of the $8 billion multi-state natural gas transmission project, most industry observers and those close to the project were caught off guard.

“It’s kind of a sucker punch,” said Greg Kozera, director of marketing with Shale Crescent USA, a nonprofit organization that helped promote the benefits of the pipeline. “I don’t think anyone saw this coming. What I sense by speaking with other organizations is nobody saw it coming.”

When he heard the news, the first thing he thought about was the loss of jobs, Kozera said. The timing of the announcement comes when unemployment — due to the novel coronavirus COVID-19 pandemic — is already at a record high.

“The sad and disappointing thing is, we need those jobs now. With COVID, we’re at 13 or 14 percent unemployment. These were good high-wage jobs,” Kozera said.

The pipeline would have carried Marcellus and Utica Shale natural gas 600 miles from West Virginia into markets in Virginia and North Carolina.

The energy companies said increasing uncertainty regarding costs associated with the pipeline, as well as regulatory delays in its construction, contributed to the decision.

Harrison County Commissioner Patsy Trecost said he, too, did not anticipate the cancellation of the Atlantic Coast Pipeline.

“I was confused. There had been a long fight to get it approved and then it seems the rug was pulled out from under us,” Trecost said. “I thought the decision had been made to move forward with it. Who put the brakes on this?”

The surprising cancellation of the project came just weeks after the companies won a victory in the U.S. Supreme Court allowing the pipeline to proceed. Other looming legal battles, however, continued to stymie the project, according to the energy companies.

In a joint news release, Dominion and Duke said recent developments had created an “unacceptable layer of uncertainty and anticipated delays.” The pipeline has long been opposed by environmental groups.

Announced in 2014, the project immediately drew the ire of a coalition of opponents, including environmental activists and landowners, who succeeded in slowing the pipeline’s construction.

The energy companies said those legal challenges were successful in putting the project years behind schedule and increasing its projected cost.

Trecost said the pipeline’s cancellation is an economic body blow to the region, especially to the workers who would have constructed it.

“What I cringe about most is the loss of opportunity for people to provide for the families,” Trecost said. “It all goes back to jobs and those were good jobs. We don’t want to lose jobs that are paying a good scale. Most of the time when a laborer is working on the pipeline, benefits are included for the worker and his or her family.”

Kozera said not only have well-paying construction jobs been lost, so have spin-off jobs that would have inevitably appeared.

“The jobs wouldn’t have been for just the people working on the pipeline, either. It would have extended to the people who support them, hotels and restaurants and convenience stores. All those side businesses are gone, too. It hurts. It hurts a lot,” Kozera said.

With the pipeline’s development suddenly stopped, Kozera said many West Virginians are now scrambling to find work during a periodic of unprecedented unemployment.

“I feel sorry for the families of the pipeline workers. These were construction jobs that were lost and there’s no magic bullet to replace them. A lot of good hard-working people who will now have to find other income,” he said.

Not everyone, though, is sad to see the Atlantic Coast Pipeline’s demise. Many people are downright ecstatic.

“We’re happy a pipeline of this scale did not get built recklessly,” said Rosser. “The first question to ask before you start spending $8 billion to build a huge pipeline across 600 miles and hundreds of headwaters streams is whether or not is will create a major disturbance and environment risk.”

As proposed, the Atlantic Coast Pipeline would span more than 600 miles through Virginia, West Virginia and North Carolina, according to the Chesapeake Bay Foundation. The planned route crosses Virginia waterways more than a thousand times, including many streams, rivers, and wetlands in the Chesapeake Bay watershed. The pipeline, as designed, would have disrupted the Appalachian Trail, according to many environmental groups.

Rosser said her group’s concerns were many and they didn’t end with the construction of the pipeline. She said West Virginia Rivers was anxious about long-term environmental impacts of the project.

“Beyond construction, once a pipeline is in operation, we’ve seen some bad things happen in terms of landslides and explosions,” she said. “We wanted to see the Federal Energy Regulatory Commission do better on assessing need and climate impact, as they have a responsibly to do. But we felt those aspects were glossed over all along.”

Rosser said environmentalists are often mischaracterized as radicals hellbent on costing other people jobs, but that is not the case. She said the pipeline is simply an outdated business concept whose backers were on the wrong of history.

“Transporting fossil fuels hundreds of miles is not the future of energy production,” Rosser said.

“We are delighted. This is good news for our members and for people who enjoy the Cowpasture River here in Virginia,” Brooks said. “Our members are very pleased.”

Brooks said the developers of the pipeline never addressed legitimate concerns regarding potential environmental damage it might cause.

While Brooks’ group protested the Atlantic Coast Pipeline from the start, he said his colleagues never imagined the huge energy companies behind it would retreat so suddenly from a project they’d touted for years.

“We had no clue they would abandon the project on the Sunday afternoon of a holiday weekend at 3:30 in the afternoon,” Brooks said.

Brooks said scrapping the pipeline is a positive development.

In its own separate announcement, Dominion Energy said it had agreed to sell “substantially all” of its natural gas transmission and storage component to a group owned by American holding company Berkshire Hathaway in a $9.7 billion deal that included Berkshire assuming $5.7 billion in debt.

Supporters of the Atlantic Coast Pipeline said the project would help economic development in parts of the three states through which it would run. Proponents also said its presence would help attract heavy manufacturing companies seeking to take advantage of the accessible natural gas.

While Kozera admitted his shock at the unexpected cancellation of the pipeline, he said this is no time for West Virginians to wallow in self-pity.

“We’ve got a choice. We can cry in our beer and wring our hands or we can begin to do something about it. Now is the time to say ‘enough of this’ and expand our own in-state industries using our own natural gas. I think we’ve got a chance to do something big in-state. We’ve just got to make up our minds to do it,” he said.