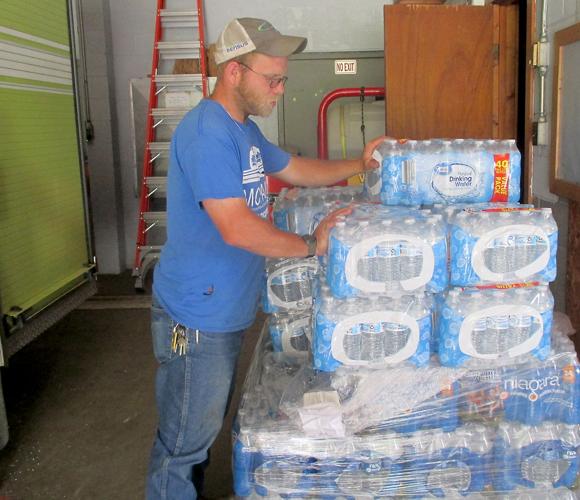 Customers of the Fairview water system were forced to use bottled water in 2019 when health officials detected E. coli in the water supply. Here, Tom Triplett, a street department worker, stands by a stack of cases of bottled water. 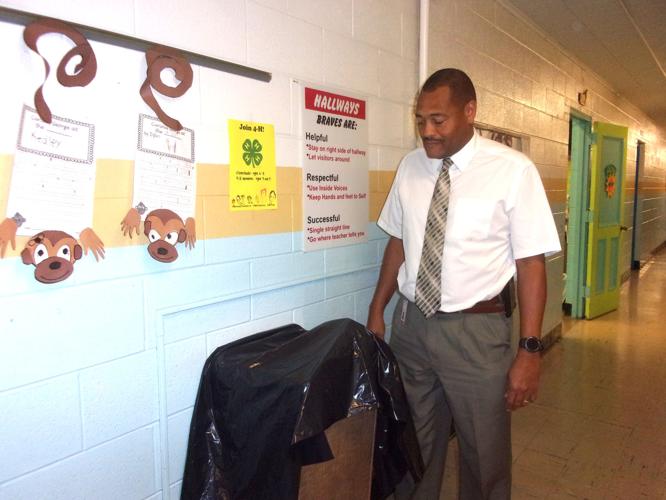 Customers of the Fairview water system were forced to use bottled water in 2019 when health officials detected E. coli in the water supply. Here, Tom Triplett, a street department worker, stands by a stack of cases of bottled water.

FAIRMONT — The soft deadline for municipalities to apply for American Rescue Plan funds was July 19, and as the first distribution of dollars takes place, local governments are planning spending.

West Virginia is receiving $1.35 billion dollars that can be used in response to public health emergencies, compensating essential health care workers, to recover programs that suffered due to the pandemic or for water and sewer projects or broadband infrastructure.

Since this is no small amount of money coming into the state, the various leaders are waiting to announce their official projects this money will go toward.

“My staff has been reviewing all the ways this money is needed, and is working on a strategic plan on how we are going to propose that it be spent,” West Virginia Gov. Jim Justice said in a statement. “Next, we will begin reaching out to all of our legislative leadership and working together to get this money out to West Virginians that need it.”

The state itself is receiving $677.7 million from the ARP as discretionary funds, according to the governor’s office. This money is to be used on state projects or to match funds for projects in smaller areas.

Although there are no official plans being announced, many in government positions have made their voices clear on the types of projects they’d like to see the money fund.

During his visit to Fairmont on Thursday, Attorney General Patrick Morrisey expressed his wishes for what he believes the money should be spent on, focusing on business recovery from the toll of the pandemic’s shutdown.

“In the context of the COVID money, there are opportunities to invest where we could put some people back to work pretty quickly,” Morrisey said. “That’s the thing I’d advocate for. A lot of times when money comes in from Washington, people are quick to throw the grant money out and do politically popular things. I would ask... everyone to invest in durable, capital expenditure. That’s going to make a difference long term.”

In the state legislature, it’s apparent that many of West Virginia’s problems run deeper than getting people back to work. A large portion of the ARP money in West Virginia, especially funds going to smaller municipalities, will likely be spent on infrastructure projects.

“Broadband internet and water infrastructure are the two I hear the most often from legislators saying about what they’ve heard from their constituents,” said W.Va. Del. Joey Garcia, D-Fairmont. “I think, with the local money, that is a lot of what we’ll see.”

Garcia hopes the state’s pool of money will go to programs to help vulnerable individuals and fund programs such as improving mental health and providing counselors for schools.

“I think that’d be an expense that’s permissible under the current regulations,” Garcia said. “I think that’d help teachers a lot and help students coming back to school this year.”

On the other side of the state legislature, W.Va. Sen. Mike Caputo, D-13, of Rivesville, said the issues around West Virginia, especially in more rural areas, are centered around infrastructure.

“One of the things that is certainly needed is infrastructure,” Caputo said. “There are still a lot of people in Marion County that don’t have good, high-speed internet. In cities, water lines are needing replaced, sewer lines that need replaced. Quite frankly, there are still some communities without sewage and water in Marion County.”

This picture of aging infrastructure is apparent all over the state.

“We all seem to have the same types of problems here in West Virginia,” Caputo said. “The one things we all should agree on — whether Democrats, Republicans or Independents — is West Virginia cannot move forward with out good, solid infrastructure.”

Garcia and Caputo agree that internet should be a major priority for the state, both speaking of high-speed, affordable broadband as being just as important as sewage and water.

“There’s already $138 million coming to us from the American Rescue Plan specifically for broadband,” Garcia said. “But I think we need to take potentially several hundred-million dollars, spread that out, and try to make sure we are focusing on getting that last mile connected to people.”

And the last mile has been cited for two decades now as the stumbling block for connecting homes to high-speed internet. The last mile is literally that — the space from the cable company’s line to remote homes, which are expensive to build and not as profitable for internet providers.

At the county level, Randy Elliot, Marion County Commission president, is looking to help many of the smaller and rural communities in Marion County with the $10.8 million coming to the county’s coffers.

While the county commission hasn’t met to officially designate projects for ARP funds, Elliot has a sort of wish list of things he believes the commission will look at when doling out the money. Many of the areas he mentioned line up with the areas the legislators said are pertinent all around the state.

“We want to focus on extending broadband to the citizens of Marion County that don’t have it or have very little of it,” Elliot said. “We’re going to look at... infrastructure as it applies to water and sewer. Marion County has one of the highest number of city pipe water users in the state.”

Elliot said that over 90% of residents in Marion County use city-type water and he’s made it a point during his time as commissioner to expand water service throughout the county.

“Unfortunately there are still a lot of people who don’t have [city water],” Elliot said. “With sewer we have many, many small communities that don’t have sewer. They flush the [toilet] and the sewage goes in the creek. Unfortunately in West Virginia that’s the way that it is.”

At the city and town level, most local councils haven’t gotten to sit and plan what the relief money will be directed toward, but most have an idea of the projects they’ll be looking at.

Fairmont is slated to receive $7.65 million but Mayor Tom Mainella said the council hasn’t had the chance to sit and discuss where the funds will be going, but he’s confident that the money will be used correctly.

Mainella is sure that the council, with the help of city administrators, will use the money wisely.

Just across the river, Pleasant Valley is set to receive $1.31 million in assistance. Mayor Emily Haddix is pretty set on the city’s plans for the money.

“We have a lot of different ideas that we’ve bounce around and the main bulk of our funding we’re getting is going directly back into the infrastructure of storm drainage fixes,” Haddix said. “That can be either road repairs from where we’ve had runoff and a lot of drainage projects.

“We’ve also discussed upgrading some of our waterlines that we have. We have a lot of waterlines that are smaller in some areas and need to be expanded, so infrastructure and some utility work is the direction we’re heading.”

Haddix said that the city has looked at broadband expansion, but, being located just off Interstate 79, the city is OK with its current internet speeds. However, if there is money leftover, that is a project they may look at.

In the west of the county, the city of Mannington is set to receive $840,000 dollars, but their newly-elected mayor, Lora Michael, said they don’t have any plans to announce at this time.

“As soon as we get confirmation as to how this money can be spent then we can start dreaming and start planning,” Michael said. “Right now, we’re just sitting tight for confirmation. I’m sure that my council and I will make a good decision and put it toward the best interest of our city.”

In 2019, health officials found E. coli in the water supply in the town of Fairview and two years later, the town still does not have a permanent solution. Last fall, then-mayor Brian Shuck said it may take a couple of years to construct a water main that will pump water from the Monumental Public Service District to the town. Fairview is set to get $170,000 in ARP funds.