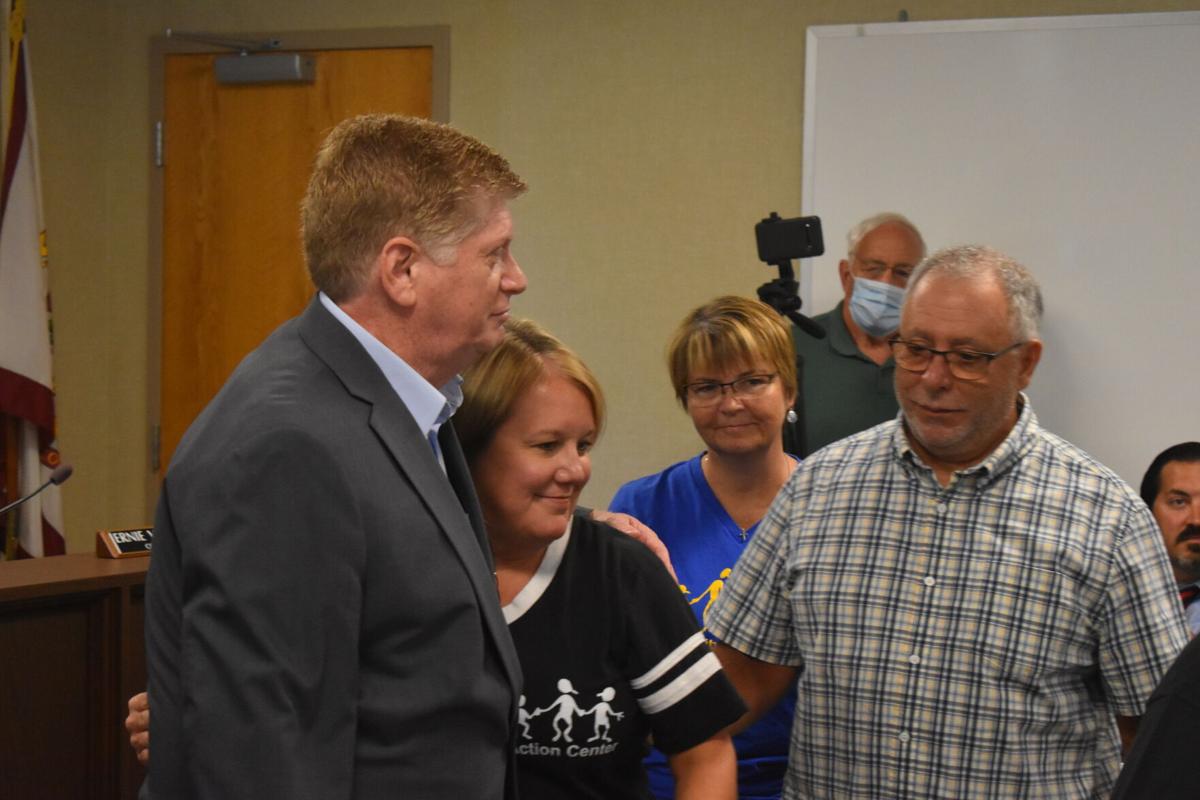 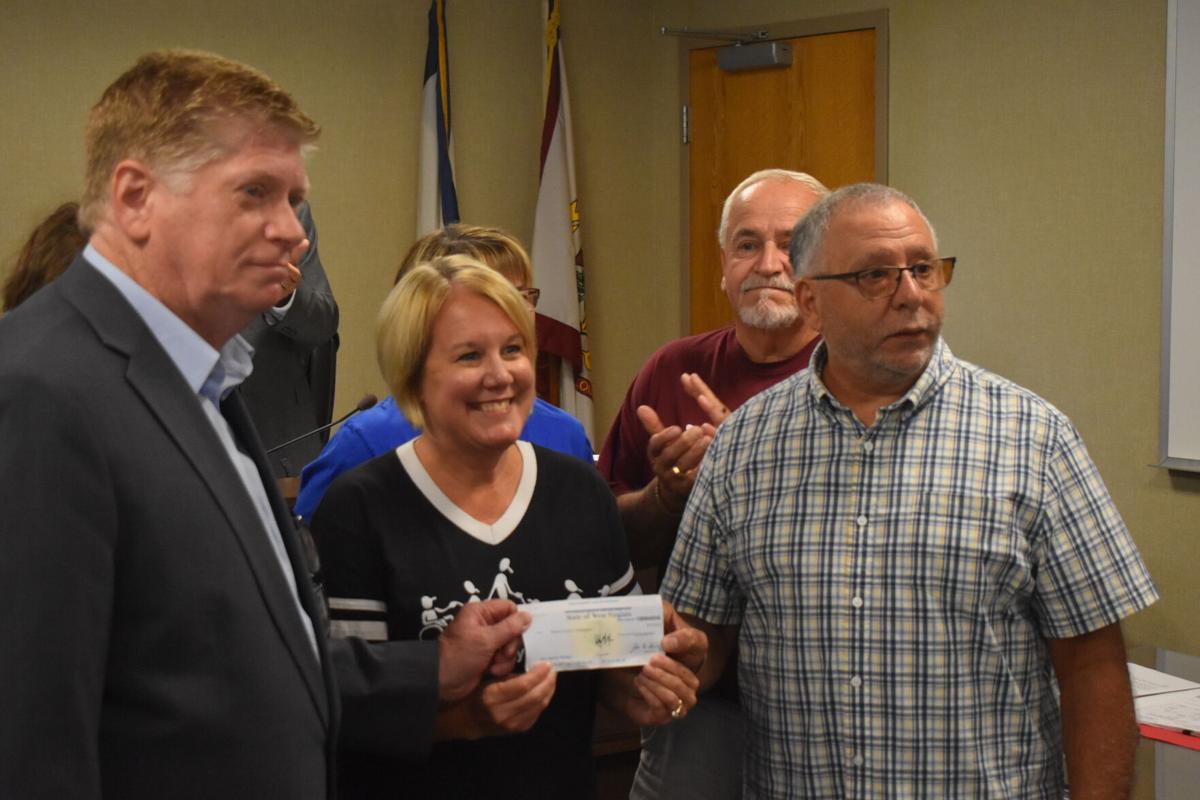 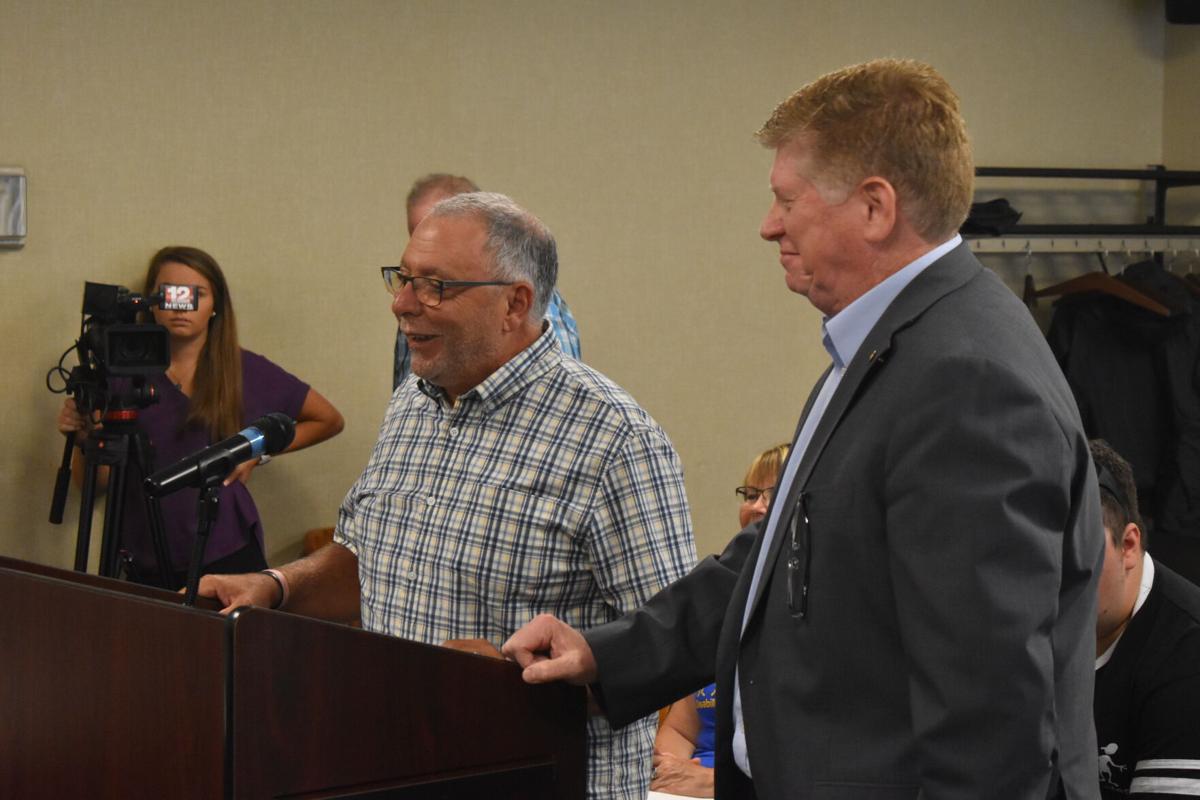 Sen. Bob Beach, right, and Sen. Mike Caputo speak to the Marion County Commission about their $200,000 donation to the DAC's relocation efforts on Wednesday.

Sen. Bob Beach, right, and Sen. Mike Caputo speak to the Marion County Commission about their $200,000 donation to the DAC's relocation efforts on Wednesday.

FAIRMONT — After being hit with heavy flooding in mid-June and pledging to forego expensive repairs to its building, the Disability Action Center is one step closer to having a new facility.

W.Va. Senators Bob Beach, D-13, of Morgantown, and Mike Caputo, D-13, of Rivesville, presented a check for $200,000 to Julie Sole, DAC director at the Marion County Commission meeting Wednesday. Under state rules, funds come from Charleston to counties, and then counties disburse funds to the end-user.

“The first allocation we were told we would have $44,000 each to allocate,” Caputo said. “Then that allocation went to $100,000 each after some accounts were swept. That’s when we upped the ante.”

After the flooding, the Marion County Chamber of Commerce quickly organized a meeting with local and state officials to brainstorm ways to help the DAC find a new location.

In that meeting, Caputo and Beach announced they would be donating discretionary funds to aid the DAC, but Wednesday, that number had risen to $200,000.

The senators’ donations are part of a discretionary fund given to each state senator for spending on projects of interest. Caputo and Beach donated their entire individual funds to the DAC.

“I wish we didn’t have to be here, I wish things were as they were before, but we’re grateful that we were able to respond as quickly as we were,” Beach said. “[The DAC] is an organization you can’t ignore. We often use the term ‘no brainer,’ but helping the DAC really was a no brainer.”

Sole said the DAC has found a new building and have a purchasing agreement drafted and ready to execute.

“That [new] site is on a bus line, it is a beautiful site, and it’s already accessible,” Sole said. “We’re really excited about it and it’s a fabulous fit for our organization.”

Sole was already elated at the senators’ initial pledge, but the news of the jump in the donation was a surprise.

In June, Sole said the floodwaters that accumulated over a three-day period from June 12-15 caused extensive damage to the interior and exterior of the 11,000 square-foot facility on Benoni Avenue at Coal Run Hollow.

Four classrooms in the DAC, the gymnasium, a newly-remodeled area, the front entry, the sidewalks and parking lots all were either totally ruined or extensively damaged.

And even after the state senators made their donation Wednesday, officials revealed more help is on the way for the DAC. According to Fairmont Mayor Tom Mainella, the city will be buying the DAC’s current location from them.

“There will be more information coming out about that soon,” Mainella said.

The county commission has also said they will make a donation to the DAC but have not settled on an amount at this time.

But all the parties involved agree that the DAC and the work it does is invaluable to the community. Caputo said that saving the DAC was “top priority.”

“The work they do, the training they do, the hands-on approach they do... for those folks that need that service, it’s just tremendous,” Caputo said. “I’m honored we could be a little part of this project.”

The DAC is also accepting private donations of any amount. To find out more about the work the DAC does or to send a donation, visit www.disabilityactioncenter.com/donate/.