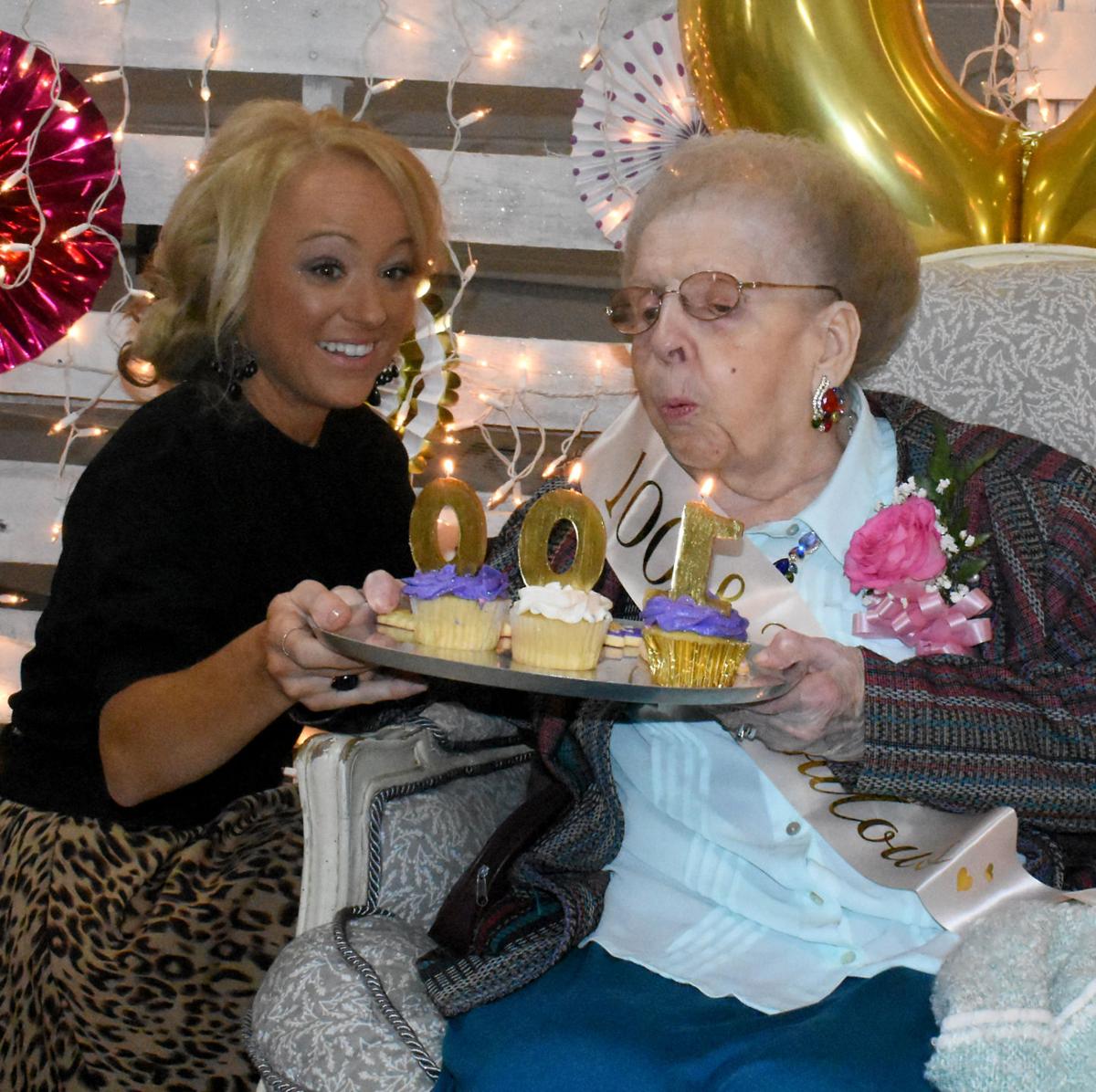 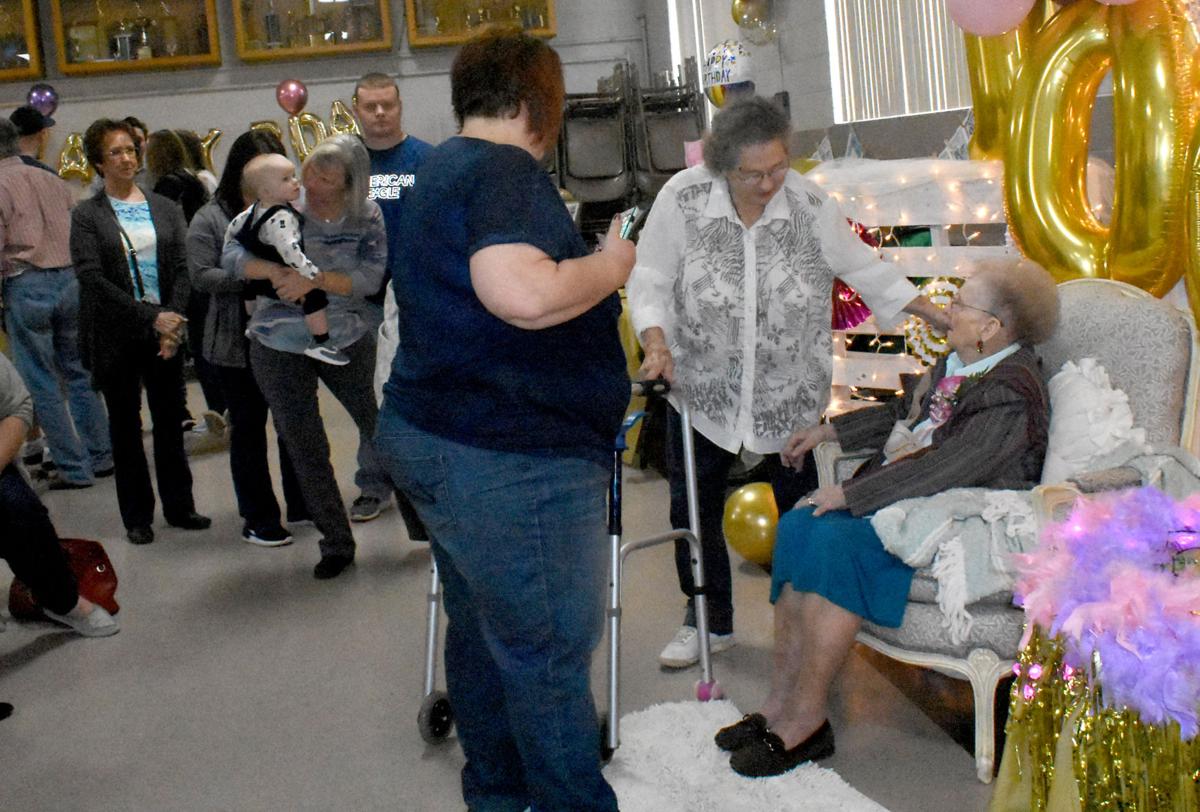 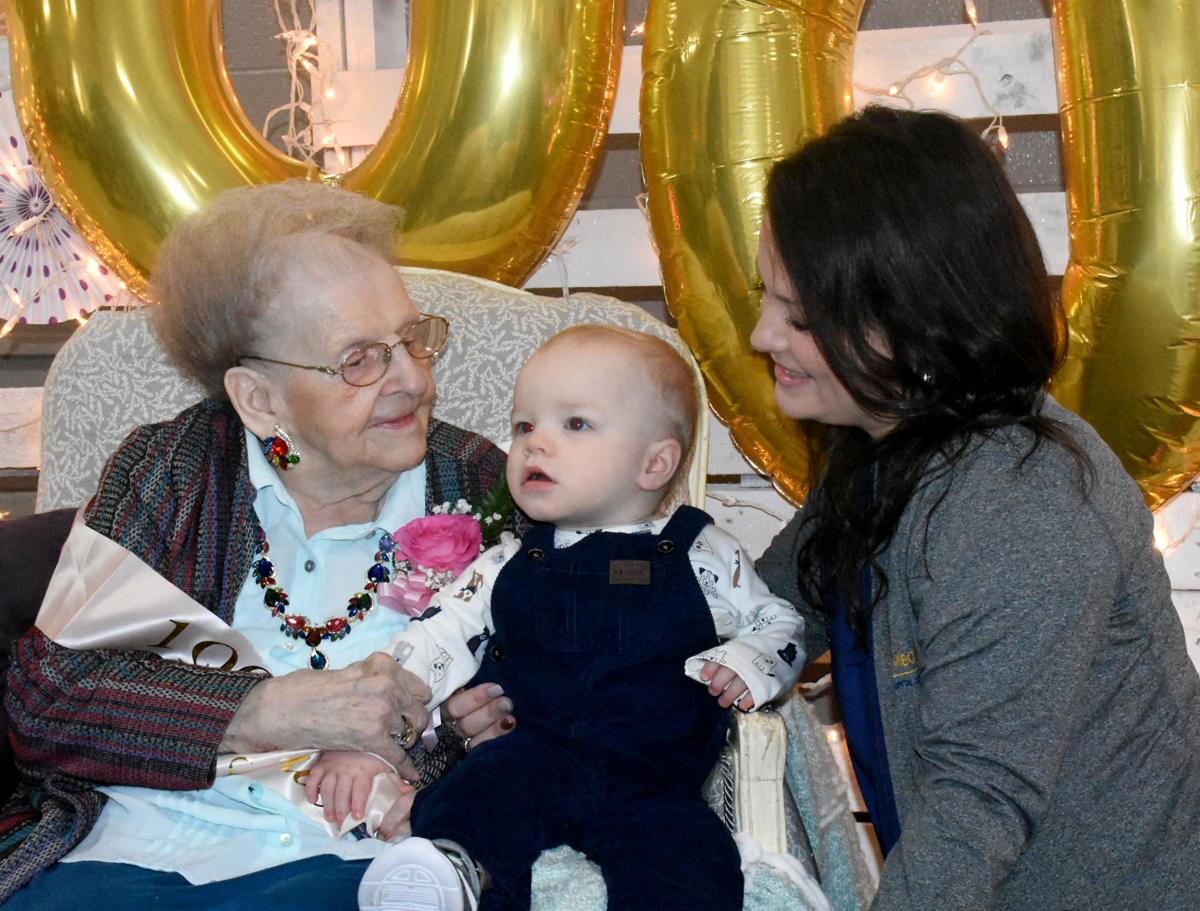 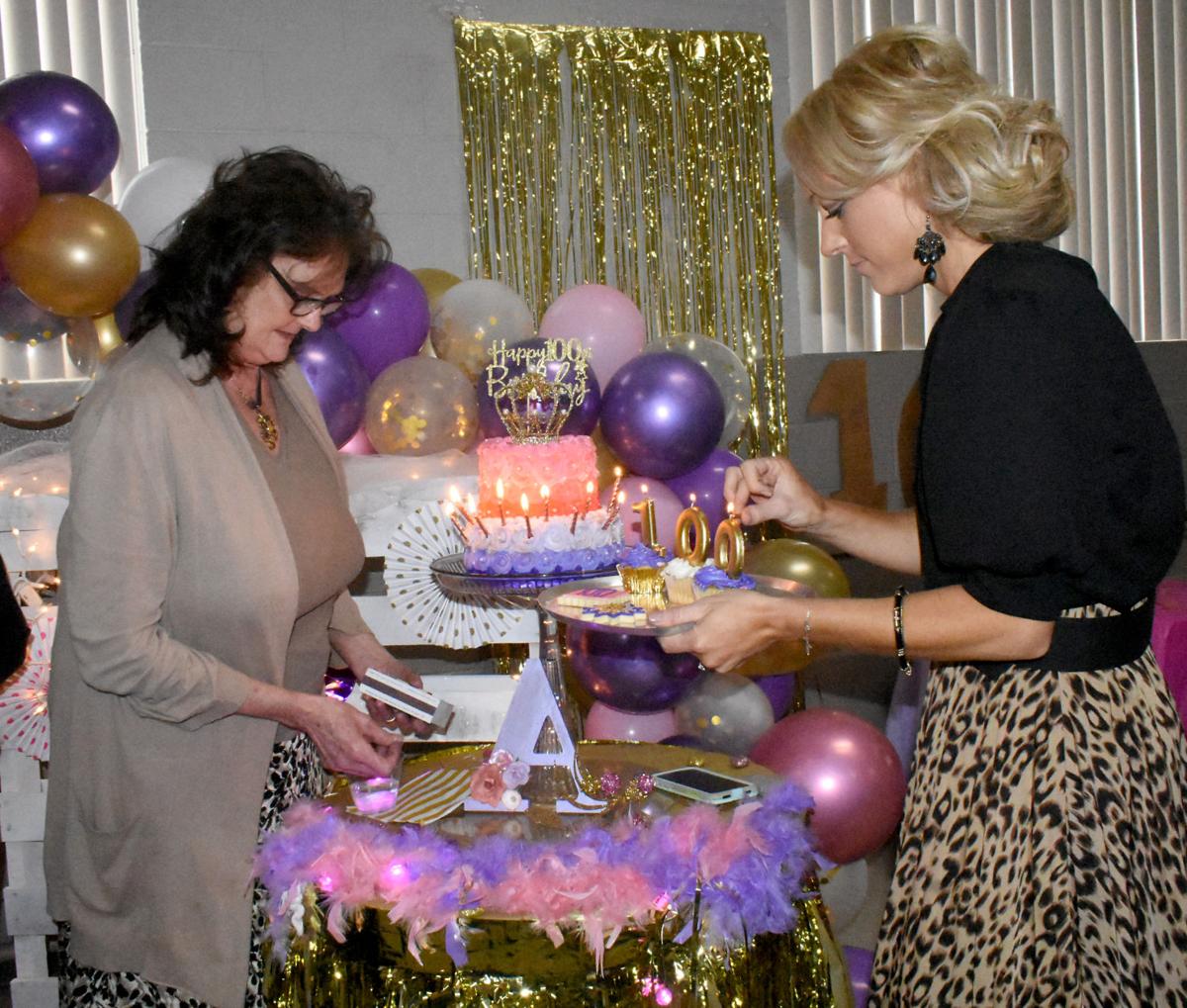 “The whole thing, I mean, it’s beautiful,” Zentz said of the celebration.

The town hall was all decked out for the party.

Outside, a banner building proclaimed “Cheers to 100 Years” while a display inside celebrated the centenarian’s life, including her encounters with stars like Marilyn Monroe, Ginger Rogers, and Fred Astaire.

Photographs, pinned up with clothespins like laundry, took people down memory lane while colorful balloons created a cheery atmosphere.

Then, in the signature moment of the day, people sang “Happy Birthday” as Zentz blew out candles on her cake to the hearty applause of the crowd.

There were written Happy Birthday messages from none other than the Pope and the President of the United States.

The blessing from Pope Francis provided an apostolic blessing to Zentz, invoking “an abundance of divine grace.”

“I was amazed,” Zentz said of the Pope’s blessing. “And then I got one the other day from the president.”

The card from U.S. President Donald Trump and the First Lady reads, “Happy Birthday! Congratulations on this wonderful occasion. We wish you and your loved ones a beautiful, glorious day. We hope your heart is filled with joy knowing you have experienced this country’s greatest blessing, the freedom and affection of family and friends over a long, well-lived life. Your American century is a proud part of our Nation’s remarkable story. We are inspired by your continued strength and spirit as we join your family and friends celebrating this tremendous milestone! God bless you and Happy Birthday!”

Jo Lynn Taylor of Fairmont, one of Zentz’s 27 godchildren, planned the party for Zentz, who she said is more like a grandmother to her.

“We wanted to make it so that it was something that people from the town, and then out of town, could come and visit her and speak to her and share memories with her,” she said.

She recalled Zentz’s time as a dancer, and Zentz’s experience dancing with The Radio City Rockettes, dancer “Bojangles” and the legendary Fred Astaire.

“She took dance lessons in New York City, and from that, she danced at, I think it was The Cotton Club in New York,” Taylor said. “I believe that’s where she met Fred Astaire. She danced all over the country.”

“Well, I won it,” Zentz recalled, with a laugh.

And she hasn’t forgotten her time dancing with the Rockettes. When asked about the experience Saturday, she kicked up her leg a little.

Athletics are something she excelled at in her younger years.

She was a bowling champ, a golf champ in 1953 and a “Softball Hero of the Game.”

“I played softball when I was in school,” Zentz recalled. “I was a first baseman.”

Taylor said Zentz baptized her and she remains close to her, visiting her every Sunday with her own family and listening to her stories.

“She’s more like a grandmother to me,” she said. “She’s a true inspiration.”

Taylor, who estimated that more than 100 attended the party Saturday, said she wrote a letter to Zentz as a birthday gift in which she wrote that Zentz was her “lifelong role model.”

She said it was “amazing” that Zentz has reached 100 years of age, noting that she remembers “everything.”

“She remembers more than I do,” she said.

But it was Zentz’s contributions to Monongah that perhaps drew the fondest memories Saturday. Zentz, her late husband, Bruce, and her parents operated a general store, P.P. Shenasky Grocery.

“The store was built in the 1800s and they wanted my dad to take it over, and in 1921 we took over,” Zentz said in a previous interview, back on her 96th birthday. “So when he (Bruce) came out of the service (in 1946), my dad said ‘So what is Bruce going to do?’ and I said ‘Well I don’t know what to do,’ so they asked us to join them in the store. So we went into the store business with my parents. After they passed away, we had it.”

At the birthday party Saturday, retired teacher Joyce Evans from Jayenne Elementary School said she had worked at the Dairy Kone in the early ‘70s when she was 18 years old.

Evans said Zentz helped a lot of young people in Monongah, and recalled how Zentz encouraged her to get her education.

As a birthday gift, Evans bought Zentz a book on angels.

“She lit up,” Evans said of Zentz upon receiving the gift.

“I think it’s fabulous,” he said. “If anybody was going to make it to 100, it would be Amelia because she’s such a positive lady, she’s a giving person.”

Susan Sanders of Monongah, a third cousin of Zentz and a member of Monongah’s Christmas light committee, attested to Zentz’s generous nature.

“She donates money to us, all the time,” she said of Zentz’s contributions to the committee.

“She is amazing,” she said. “I go up and see her at least once a week…and she will tell me stories, she can remember everything. She has every love letter that her husband wrote to her from the service, and she read a couple of them to me.”

Gay McDonald of Monongah, who also attended the party, said Zentz helped her when she was in need.

“My husband died when I was 32 years old,” she said. “If it hadn’t been for Amelia and her husband, me and my four kids probably would have starved to death.”

She said Zentz provided her family with food from her store and gave her money for utilities and her kids’ school expenses.

“There’s only one of kind,” she said. “She saved my life and my kids.”

Zentz’s great-nephew, John Henry III of Baltimore, Md., said, “Amelia’s always been a wonderful, generous person who would take care of you however she felt she could.” He recalled how Zentz would give children penny candy in her family’s general store and show them around the store. At the Dairy Kone, he said, she “would treat to you to largest ice cream you ever had.”

Monongah Mayor Johnboy Palmer was pleased that Zentz’s birthday was being celebrated.