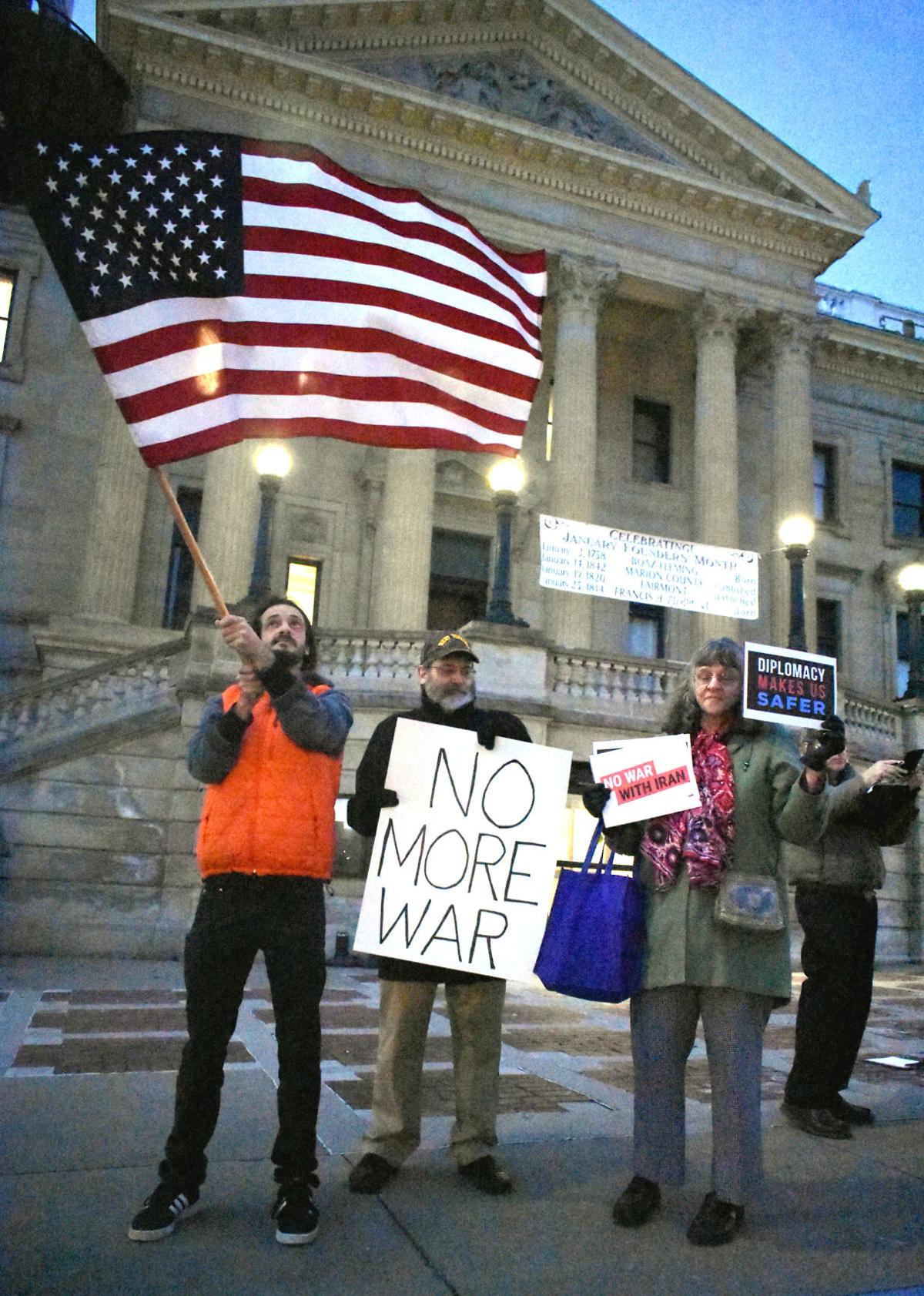 From left, Warren Hilsbos, Ken Hilsbos and Nancy Hilbos, all of Fairmont, protest in front of the Marion County Courthouse Thursday night. 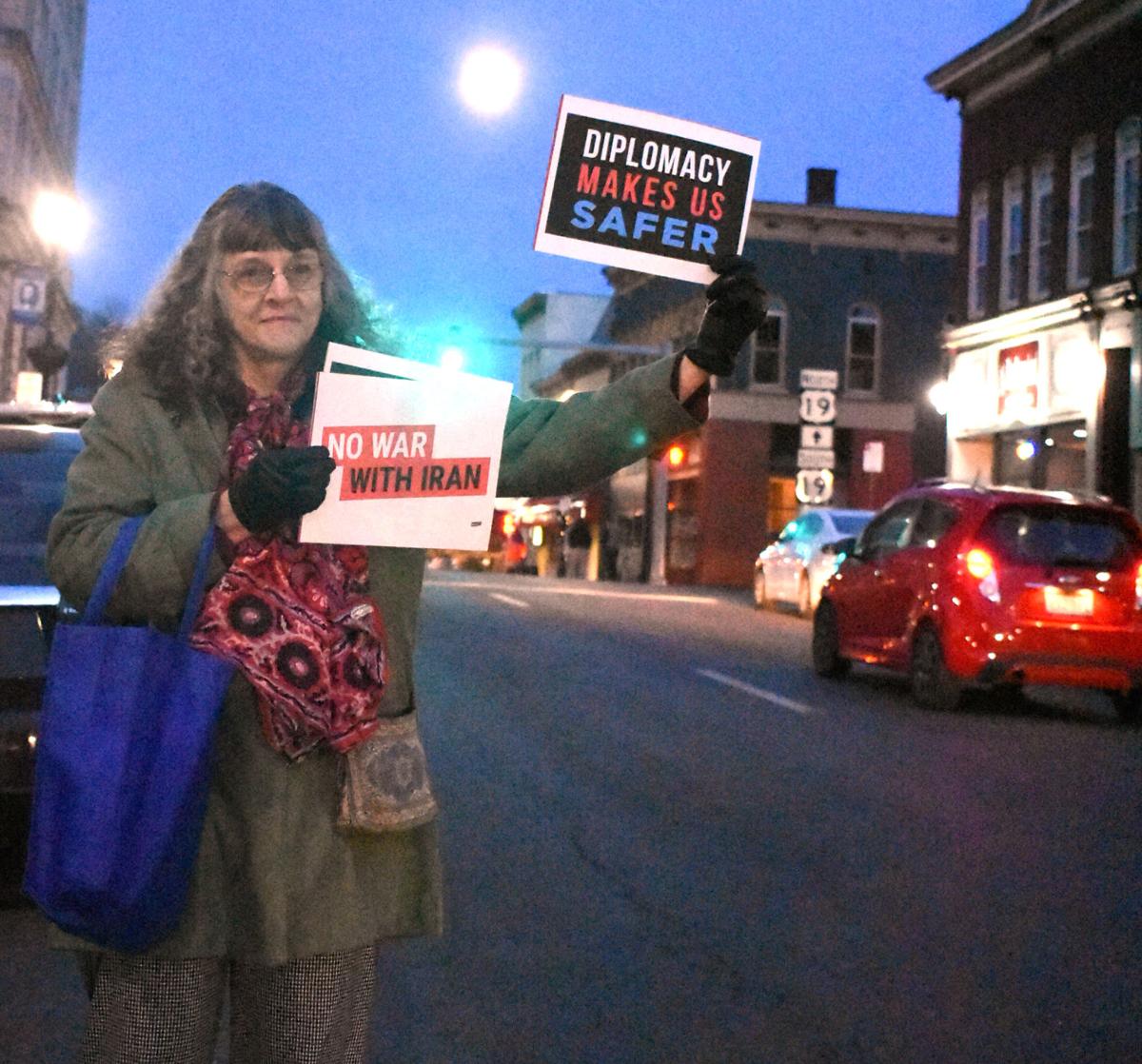 Nancy Hilsbos holds up signs during an anti-war protest Thursday night in Fairmont.

From left, Warren Hilsbos, Ken Hilsbos and Nancy Hilbos, all of Fairmont, protest in front of the Marion County Courthouse Thursday night.

Nancy Hilsbos holds up signs during an anti-war protest Thursday night in Fairmont.

FAIRMONT — A small group of local protestors staged a “No War with Iran” demonstration Thursday evening in front of the Marion County Courthouse downtown.

Their action was part of similar protests that were planned all across the nation for Thursday.

One of the five local protestors, Ken Hilsbos of Fairmont, recalled how it all came together on short notice.

“We organized within probably less than 48 hours locally,” he said.

He said it was part of a “National Day of Action” of protests that began being organized after the U.S. killed Iranian general Qasem Soleimani.

Hilsbos said he heard that protests were taking place in 350 locations in the U.S. Thursday.

“To my knowledge, this is the only one in West Virginia,” he said.

Hilsbos said the protestors feared the situation in Iran could get ugly, and they wanted to speak out locally.

He was glad there has been some de-escalation following the high tensions.

“Like her sign says, diplomacy makes us safer,” he said, referring to one of the signs at the demonstration.

The situation concerns him.

“Trump has been getting more and more reckless, more and more impulsive, he clearly has no plan,” he said. “The attack on Soleimani was without any evidence that has actually been presented to Democratic leaders in Congress. It’s frightening.”

His son, Warren Hilsbos, who was the driving force behind the local protest, explained why he thought it was important for those concerned about Iran to be heard.

“You’re familiar with the saying, ‘too little, too late?’” he said. “I didn’t want to put myself or anyone else around here in that position. I wanted to make sure people had an opportunity to show our commitment to peace.”

He was concerned about the long-term effects of killing Soleimani.

“It could take 40 or 50 years for the United States and the international legal order to recover from that,” he said.

Another protestor, Nathan Clouser, 25, of Fairmont, said he has always been “kind of a socially conscious-minded individual,” and has taken a “very hard anti-war stance” since he was a child.

His father was a veteran and two of his best friends are in the military. He said he remembers the “endless wars” that have taken place over the last 19 years.

“We are the generation that has seen more bloodshed and conflict, I think, than, you know, a lot of other generations — continuous, you know?” he said. “And it’s gotten to the point now that we’ve almost become desensitized.”

“On top of that, I’m very sympathetic and empathetic to people around the world,” he said. “I have a very global, far-reaching circle of friends and acquaintances, and I feel like that has kind of helped me. It’s been a privilege to me to help broaden and kind of help me understand and see the resounding effects that these kinds of conflicts and the military-industrial complex has on global politics and social affairs.”

David Sturm of Fairmont, who was also protesting, explained why he got involved in the local protest.

“I don’t think Iran is the greatest country, I think there’s too much religious ideas over there where they’re not really a good country for their people,” he said. “But I don’t think that’s an excuse for us to pick on them. And it seems to me that a lot lately we’ve been finding things to criticize Iran for and we’re picking on them and we’re trying to make this big case that they’re really so bad that we should start a war with them without even coming out and saying it for sure, although a lot of people are, and I just don’t think it really makes any sense for us to start a war.”

Another protestor, Nancy Hilsbos of Fairmont, who is married to Ken, said, “I feel like our government is not working together, and the last thing we need is another military adventure where the military is dragged in kicking and screaming. I don’t get any impression that anybody in the military wants this, except a few people that have always had a focus on Iran and were just waiting for their chance. This society is very focused now, or it should be, on our own problems. The state of West Virginia certainly has sent enough of our people into situations like this, and they aren’t even treated well when they come back.”

She wanted “everybody to understand that this is still your right to talk about what you really think, and try to stop something bad before it gets started.”

She thought 65 percent of the public Thursday was supporting their protest.