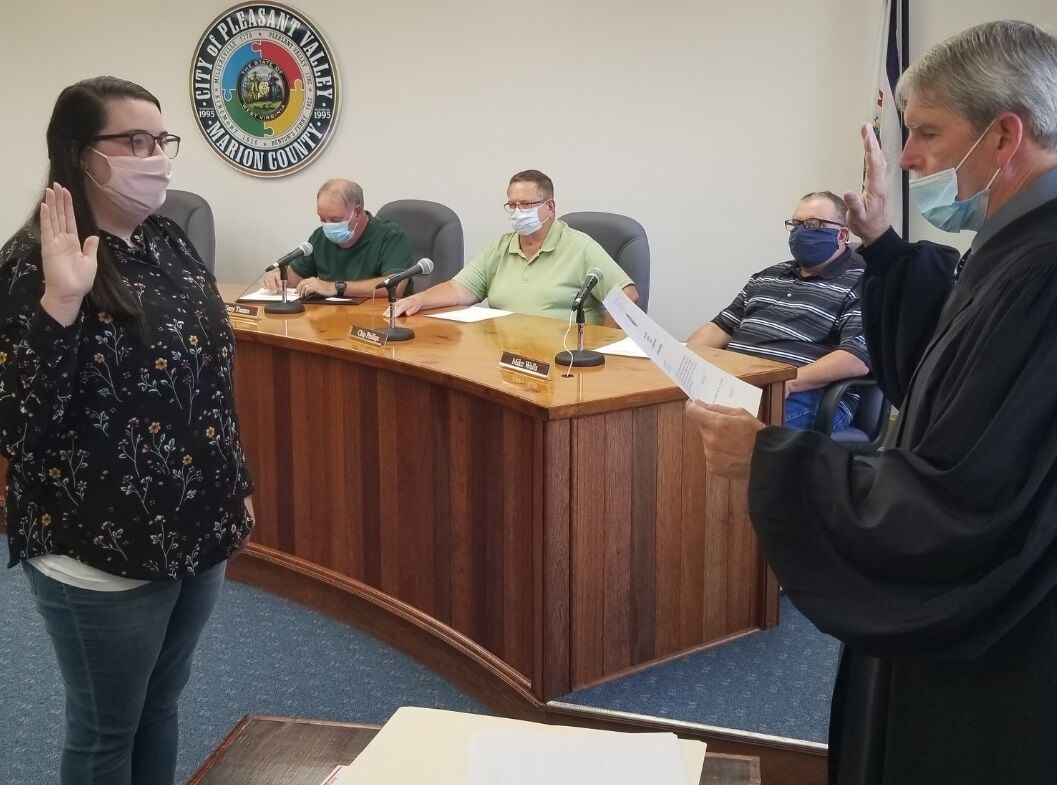 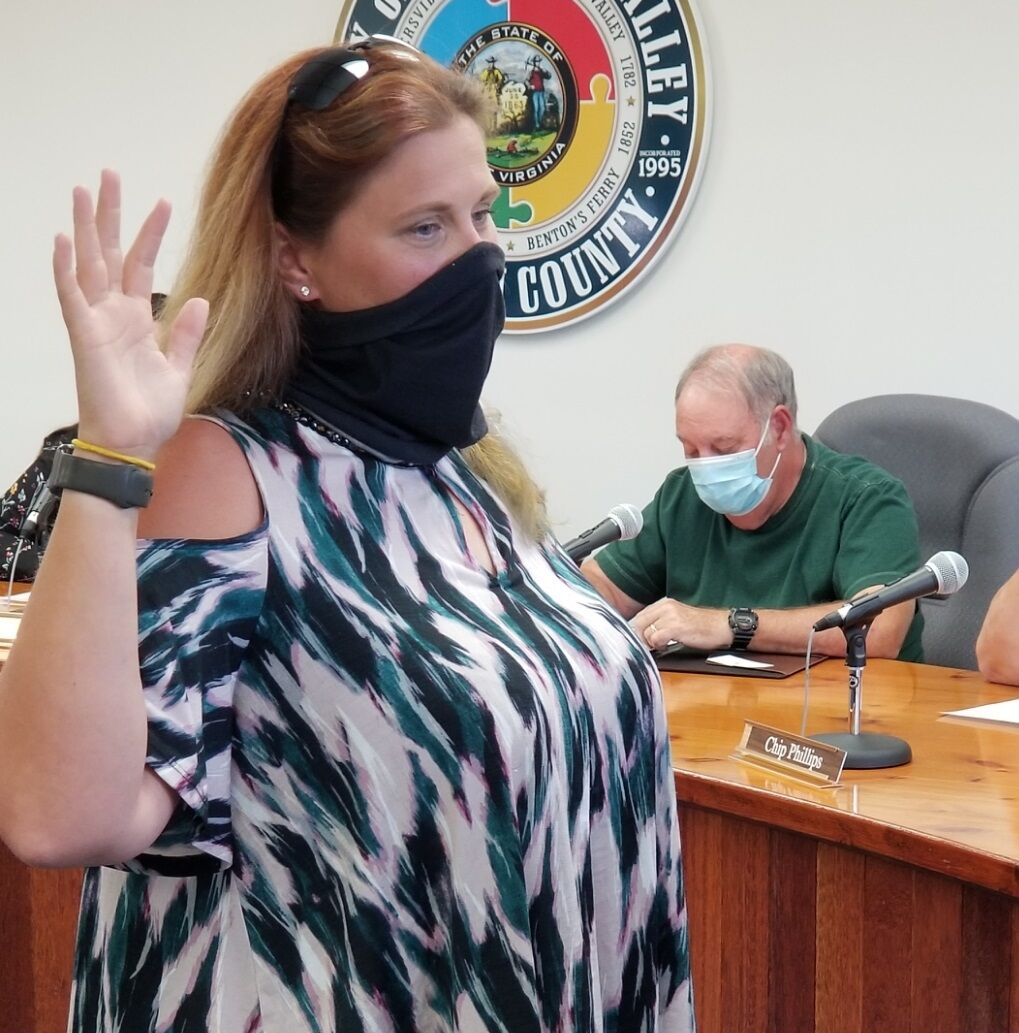 Council member Erin Henderson takes the oath of office Wednesday at a meeting of the Pleasant Valley City Council. 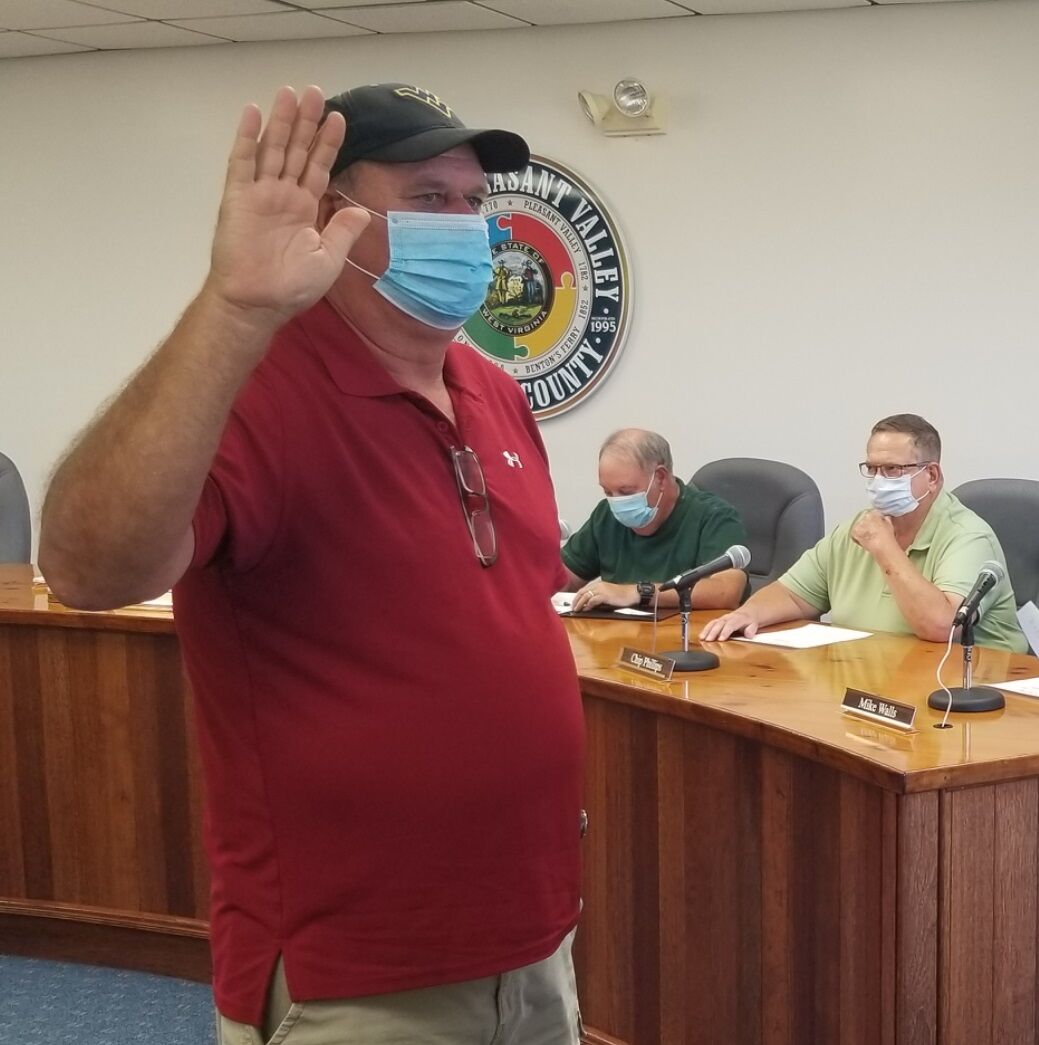 Ed Aberegg is sworn-in as a member of Pleasant Valley City Council Wednesday after winning in last week's election.

Council member Erin Henderson takes the oath of office Wednesday at a meeting of the Pleasant Valley City Council.

Ed Aberegg is sworn-in as a member of Pleasant Valley City Council Wednesday after winning in last week's election.

PLEASANT VALLEY — There was a changing of the guard at the City of Pleasant Valley’s municipal building Wednesday, as Judge Pat Wilson administered the oath of office to a new mayor and two new council members.

Haddix defeated Metcalfe by a count of 217-156. Aberegg narrowly defeated Dixie Sorenson by a 164-160 margin, while Henderson bested write-in candidate Dylan Yanero by a wide margin, 227-66.

Council members Gary Timms and Chuck Ledsome ran unopposed in their respective reelection bids, while Mike Walls and Chip Phillips’ seats were not up for re-election.

In winning the mayor’s seat, Haddix, 31, ushered in a new era in Pleasant Valley government.

“I encourage young people everywhere to run for these small offices because that’s where change happens, at boards of education, on small city councils. Change starts from the bottom up,” Haddix said.

The new mayor, who had been publicly critical of the previous administration while on council and later during her election campaign, said she was prepared to go to work.

Haddix ran on a platform to fix Pleasant Valley’s roads, potholes, and drainage issues. She said she will produce a comprehensive, staged plan to address each item.

“We’re ready to hit to ground running. I think we’ve got a great council. We’re all excited for this new era in Pleasant Valley. And it’s going to be exciting over the next two years as mayor to see the progress,” Haddix said.

Erin Henderson, 37, who had run for Pleasant Valley council in the past only to be defeated, credited the new mayor with inspiring her to run for office again.

“When Emily came in and took her seat on council, she finally started giving the residents of Pleasant Valley a voice. The council meetings started getting pretty heated, but things started getting done,” said Henderson. “When Emily said she wanted to be mayor, I knew I wanted to be there to help her. She wanted transparency. She wanted some of the power taken away from the mayor’s seat. And I was on board with that.”

Henderson said in order for the city to succeed, better communication and openness must be implemented.

“There were times when the budget was handed to the council people at a meeting and they were voting on it 10 minutes later. You can’t do that to council. They need to be able to think,” Henderson said. “This involves money people work for, the tax dollars. You can’t vote on something like that five minutes after seeing it. That’s not right. Emily wants to change that.”

Ed Aberegg, 59, who also has never held elected office before now, said he’s got a few specific objectives to accomplish in his two-year term and then he’ll “ride off into the sunset.”

“I’m one and done. That’s all I want to serve. There are a few things I’d like to help with and once we complete those, that will be it for me,” said Aberegg. “One of the major concerns is flooding. The other one is improving the roads. That’s the beginning of the list.”

The first order of business for the new council was going into special session to discuss filling two positions.

Following last week’s election, both City Clerk Pam Foster and Office Assistant Joyce Biddle resigned the next day. Both Foster and Biddle said their resignations were directly linked to Haddix’s win at the polls.

The resignations were effective immediately.

Haddix said her first act as mayor will be to post the job opening for the city clerk position. The office assistant position will be considered later, she said.

“I think we’ll probably just post the city clerk position right now to focus on getting someone in there and training them properly. My main concern with hiring two people at the same time is having to train them each for two different job positions. It’s going to be difficult for us to manage the office as well as train somebody when we’re learning ourselves,” Haddix said.