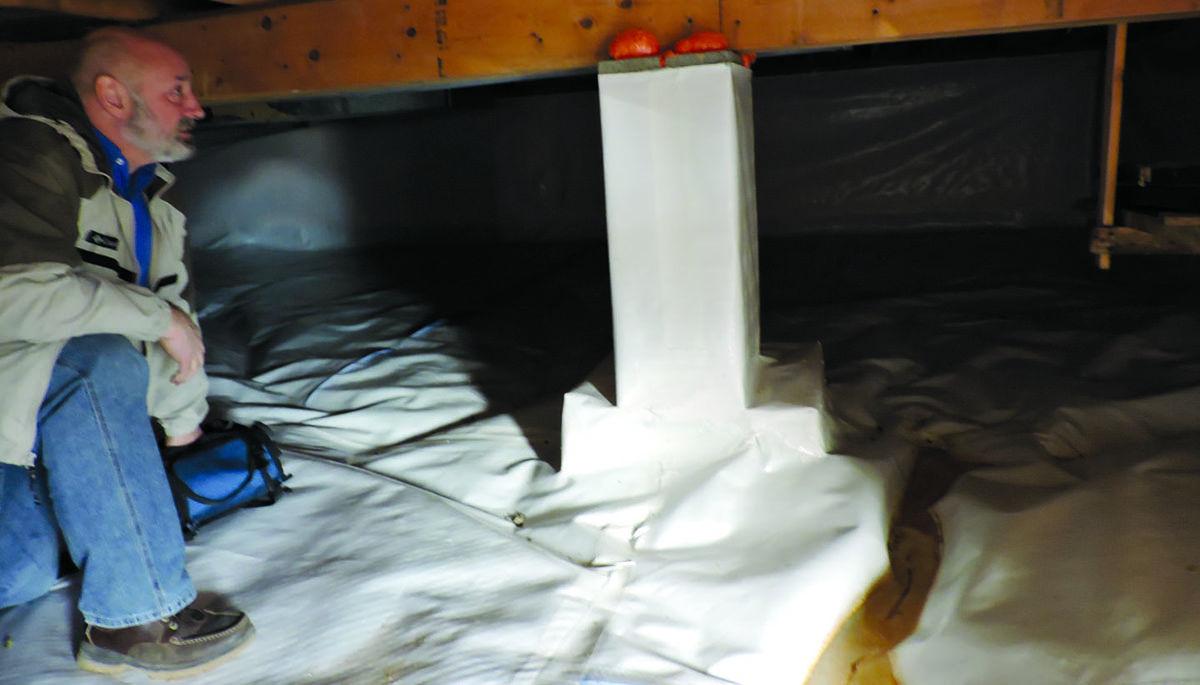 Randy Shillingburg, the director of business development of Basement Systems of West Virginia, said the home-improvement company focuses on quick, affordable and permanent solutions for waterproofing crawl spaces and basements. The vapor barriers they use in crawl spaces are 20 millimeters thick — about the same thickness of a pool liner — which ensures the space stays clean and dry for years to come. 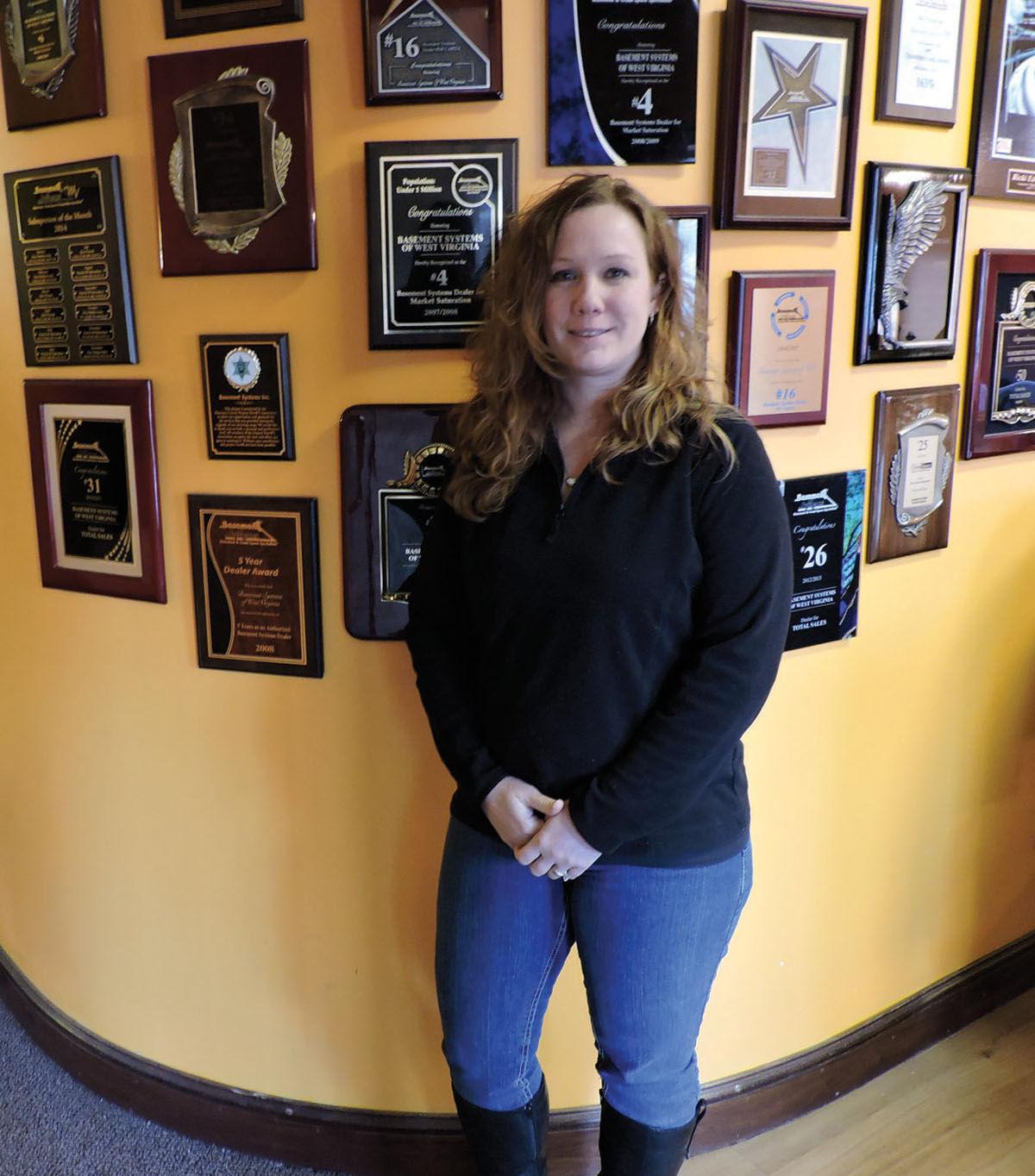 Ricki Edwards, the president of Basement Systems of West Virginia, said outdated crawl spaces can cause health and energy problems for homeowners. Unconditioned crawl spaces have foundation vents which were meant to keep moisture and humidity out of the space. However, research has proven that these vents do the opposite. She said building codes are changing, and people are beginning to realize the benefit of having an encapsulated or conditioned crawl space.

Randy Shillingburg, the director of business development of Basement Systems of West Virginia, said the home-improvement company focuses on quick, affordable and permanent solutions for waterproofing crawl spaces and basements. The vapor barriers they use in crawl spaces are 20 millimeters thick — about the same thickness of a pool liner — which ensures the space stays clean and dry for years to come.

Ricki Edwards, the president of Basement Systems of West Virginia, said outdated crawl spaces can cause health and energy problems for homeowners. Unconditioned crawl spaces have foundation vents which were meant to keep moisture and humidity out of the space. However, research has proven that these vents do the opposite. She said building codes are changing, and people are beginning to realize the benefit of having an encapsulated or conditioned crawl space.

FAIRMONT — Crawl spaces are notorious for being one of the worst places in a house.

Since it is out of sight, homeowners put the filthy space far from their minds.

But Ricki Edwardson, the president of Basement Systems of West Virginia, said crawl spaces don’t have to be dreadful places.

In fact, she said most of these spaces are outdated, which is why they cause homeowners so many problems.

“Since the science of building technology is changing, so are the building codes. Science and research over the past six decades have taught us how to build homes that are comfortable, safe and energy efficient,” she said. “Unfortunately for most homeowners, even for those building new homes, most crawl spaces are build and maintained much more closely to the standards of the 1950s than those of today.”

Her home-improvement company specializes in crawl space and basement waterproofing around the state, where they ensure homeowners have a clean and healthy environment.

There are two types of crawl spaces, she explained — an unconditioned and conditioned space. The main difference between the two deals with whether or not outside air enters the home.

An unconditioned space requires insulation, ventilation and a thin layer of material used to prevent moisture from damaging the interior of a building, which is also known as vapor barriers. In this space, air from the outside can freely blow in. An example of this is when windows are left open in a house in the spring and fall — air can freely enter the house.

A conditioned space is constructed and insulated so air cannot freely blow in. An example of this is when a house is conditioned with cool air in the summer with air conditioning and warm air in the winter with heating. The air is kept inside and can’t escape through an exposed area.

Edwardson said building codes years ago weren’t really based on science, but more on what people thought was right. This leads to a lot of problems in current homes.

“The general thought on crawl spaces was to put vents in it and blow air into the crawl space to dry it out. It sounds pretty good and sounds like it would make sense, but the problem is on hot, humid summer days — which is pretty typical for West Virginia — you are taking hot, humid air and blowing it into a crawl space that is 60-65 degrees and cooling it,” she said.

Edwardson said having an unconditional crawl space creates several problems because of those foundation vents. The vents were meant to keep moisture and humidity out of a crawl space, but research conducted by the Environmental Protection Agency (EPA) has concluded they actually do the opposite.

In the winter, even if the vent is shut, cool air will leak through the vent into the crawl space. The air cools heating ducts and makes a furnace work harder to keep the air in the house warm. By the time air leaves the furnace and runs the length of the house, Edwardson said it could have dropped anywhere from 10-15 degrees. Then furnace has to work harder to warm the house to the set temperature, which can raise the cost of heating a home.

In the summer, the hot, humid air comes through the foundation vents and cools, which produces moisture. When this humidity comes into the crawl space, it produces beads of sweat which drips off duct work, strips floor joints (also known as the crawl space ceiling) and damages pipes. The insulation in the ceiling absorbs the moisture and makes it heavy, which can cause it to sag and ultimately fall down.

Edwardson said moisture, when met with an organic food source, produces bacterial growth (mold). This is when pungent, unpleasant odors start coming out of the spaces.

In worst-case scenarios certain species of fungi can cause dry rot, or wood decay, on floor joists. This weakens the structural integrity of the house and produces sagging floors, and is an expensive mistake to correct. She said the humid, moist atmosphere is also a perfect environment for termites.

“There’s nothing good about a vented crawlspace,” she said, adding it can cause additional health problems to residents with asthma and mold sensitivities.

Edwardson said between one-half and one-third of the air in a house comes from the crawl space below due to the “stack effect.”

“Basically, if you think of your house as a chimney, hot air rises. So what happens is your air gets drawn up from the lower floor up,” she said. “You're pulling this air from your crawl space, which now has a lot of mold spores, and it's nasty. You're breathing that upstairs. Or you have duct work in your crawl space and it's sucking that air.”

Charles Roskovensky, a West Virginia homebuilder, said the process of building homes has changed dramatically over the years in regard to building codes.

In the 1980s sustainability became an issue of public concern and debate in the United States.

“(The IRC) did not come into existence until the year 2000,” Roskovensky said, adding the problem of not having a unified code. "But as far as building codes, (back then) there was nothing out there to tell people how to build houses.”

He said one of the biggest mistakes people make today when looking to purchase a new home is neglecting to look at the crawl space themselves, because typically home inspectors don’t physically go in the spaces and inspect them. He said this can be a costly mistake for homebuyers.

Inspectors and homeowners may be able to see if a crawl space has puddles of groundwater by sticking their head into the opening, but other warning signs aren’t that easy to detect. Humidity inside the space — which can be deceiving because the ground looks dry — hangs in the air and affects the integrity of a structure.

But there are warning signs in the house, above the crawl space, as well. Doors and windows that stick, or cracks above windows and door frames are indications there are problems below.

Roskovensky is currently leading training for the state on the 2009 International Energy Conservation Code (IECC), the residential code that became effective Nov. 30, 2013, which is the current code of the state. This code provides the minimum requirements for the energy efficient design of buildings.

West Virginia’s residential building code is mandatory statewide, and is enforced by the representative of a local jurisdiction. However, adoption by jurisdictions is voluntary, meaning smaller municipalities in the state can amend the IECC, making stricter building codes than required by state law.

Roskovensky’s work is designed to drive changes in how new construction is build and maintained, as well as focusing on energy efficient and healthy views of building services.

Ken Fletcher, a building inspector for the city of Fairmont, said he has seen an even amount of conditioned and unconditioned crawl spaces being built in the area in regard to new construction.

“The problem with vents is people don't open and close them like they should,” he said. “The sealed space is better in my opinion.”

Basement Systems of West Virgina employees use CleanSpace, a thick plastic liner similar to a pool liner. It is 20 millimeters in thickness. This can be fitted to seal off a home completely, and is put together with two layers of polyester cord reinforcement.

Dimpled polyethylene membrane is placed underneath the liner to allow water to flow to a pump in the crawl space to keep it nice and dry. The pieces of the liner are sealed together to ensure a strong, long-lasting crawl space.

Edwardson said her company provides free, no-obligation inspections to homeowners. They send an employee down into the crawl space, document the condition by taking pictures. After reporting and showing the pictures to homeowners, they determine how much money it would take to encapsulate the crawl space.

She said pricing varies depending on the difficulty of the project, meaning how easily workers can maneuver in the space to complete the job, but the money is worth the piece of mind.

“A little bit of prevention up front can save a lot of money in the long run. If you start getting structural repairs in the floor joists you can spend up to tens of thousands of dollars,” she said.

Randy Shillingburg, the director of Business Development of Basement Systems of West Virginia, said the three things they focus on are quick, affordable and permanent solutions for homeowners' problems.

He said even if he didn’t work for Basement Systems of West Virginia, this is an important issue homeowners need to know about.

“I think this is a very interesting story — and one that clearly hasn't been told,” he said. “If it were told, homeowners would demand that builders would construct their homes in another way — either eliminating crawl spaces entirely or fully encapsulating them so that water, moisture, bugs and mold don't have a place to thrive.”

Edwardson said the biggest challenge the state has to overcome is old-school thinking. She said we need to acknowledge the problems that come with unconditioned crawl spaces, educate inspectors, builders and homeowners about the benefits of these changes, and make sure building codes are up-to-date.

“Building codes are starting to change,” Edwardson said, adding people are beginning to realize a part of the moisture source comes from the ground and foundation vents. “You still see a ton of crawl spaces being built with vents, probably the majority are being built with vents opposed to treating it as a conditioned environment, but building codes have changed in a lot of other states. I think eventually they are going to change here to encapsulation or treatment of crawl spaces.”

For more information about Basement Systems of West Virginia, call 304-622-0048 or visit their website at www.basementsystemswv.com.