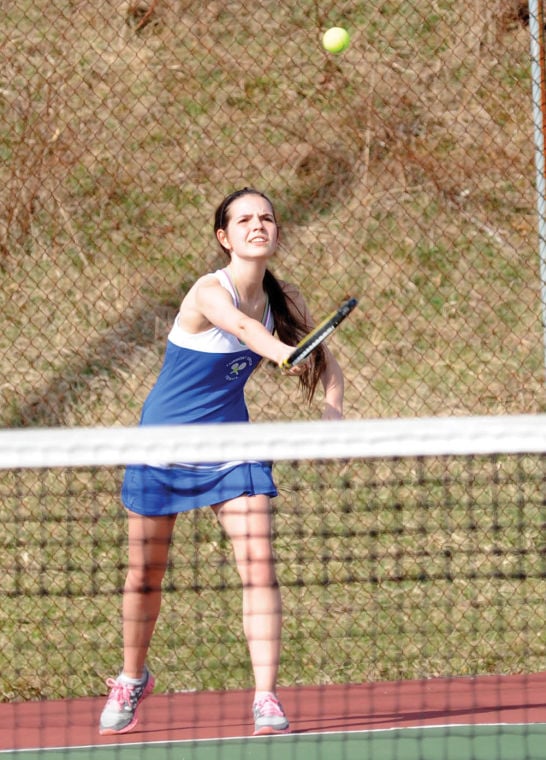 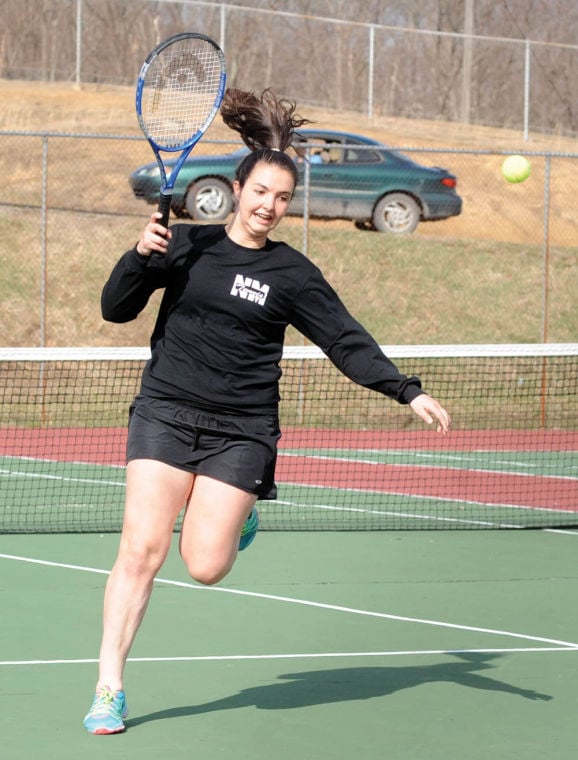 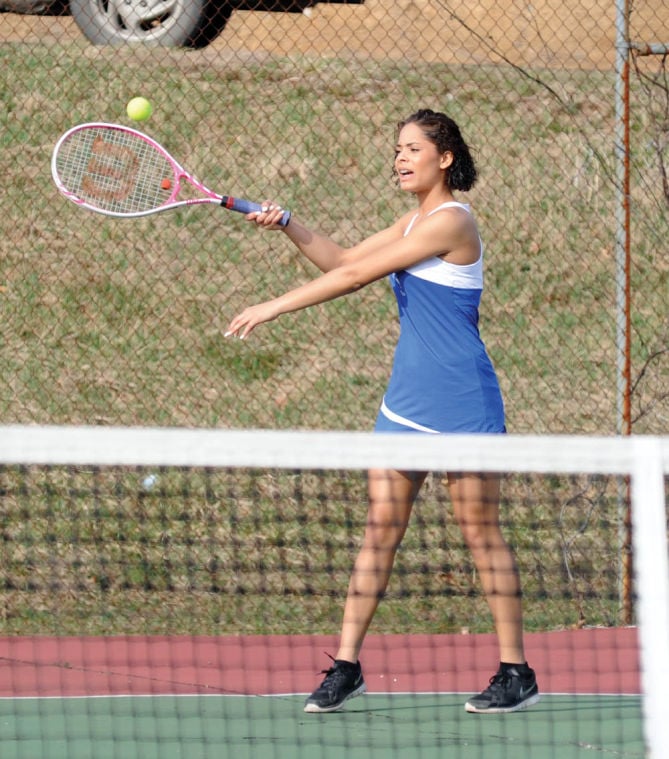 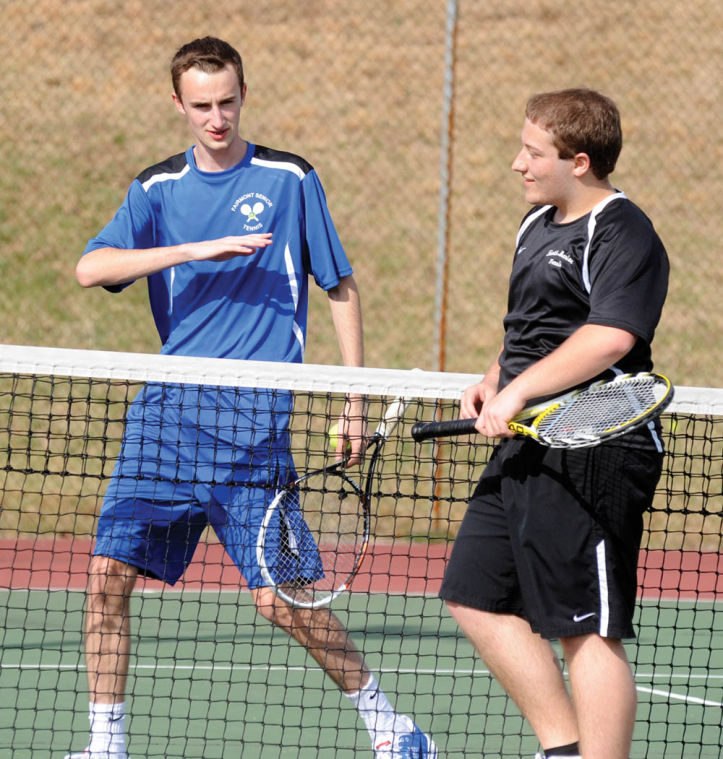 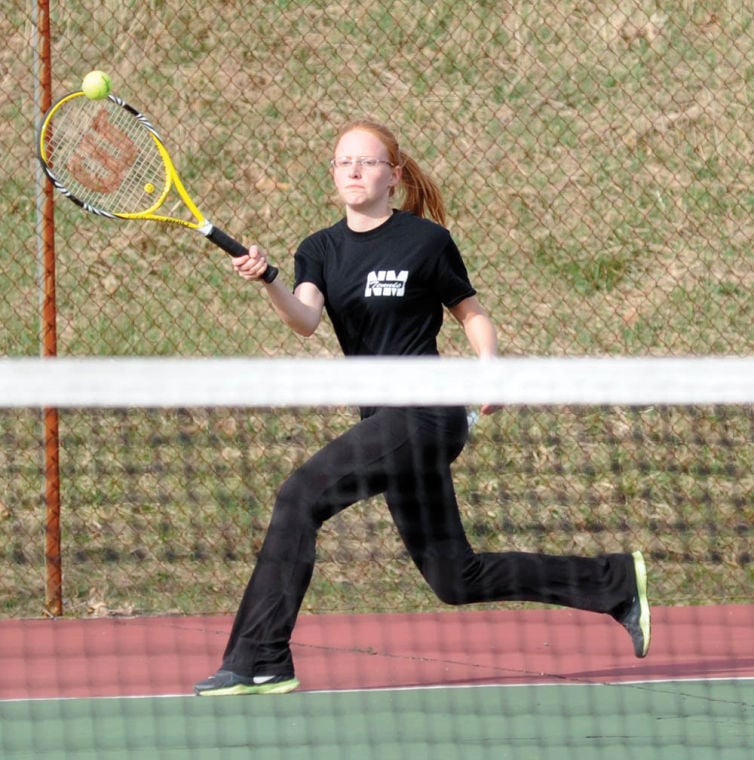 A neon yellow ball wasn’t the only thing bouncing back for Fairmont Senior Wednesday night as the Polar Bears bounced back from an off-day the day prior to beat North Marion, 6-1, in both the boys’ and girls’ circuits.

On the boys’ side, Fairmont Senior (3-1) swept the singles competitions to take an early 4-0 lead and solidify the overall match going into doubles play.

Winning all four matches was a confidence booster for the entire team, the players said.

No. 1 Logan Orton and No. 2 Blake Hoke make quick work of North’s Carl Nichols and Devin Hayes, putting them away 8-1 and 8-0, respectively.

Just one day after Orton was the only Polar Bear to win against Elkins, to start off with wins from their top two players was a sigh of relief.

“If you get the one and two wins, that’s the best because those are the toughest matches,” Orton said of the wins. “Three and fours are usually closer but I thought Trey and Taylor could win those matches.”

Giorcelli’s match went down to the wire, and it took some calming down and level-headedness to pull off victory.

“I wasn’t hitting my forehand right, and I wasn’t following through and putting topspin on it and kept putting it in the net,” Giorcelli said. “I just got down on myself, and that’s why it took so long.”

Despite Fairmont Senior wrapping the win up for the match, North’s doubles pair of Casey Schaening and Justin Alan was able to beat Fairmont Senior’s Isaac Cutright and Gage Monteon, 9-7, in extras.

Also on the doubles side, Orton and Hoke took down Nichols and Childs, 8-3, while Campbell and Giorcelli beat Hays and Humphreys, 8-0.

After Orton and Hoke both won their singles matches rather handily, Orton said the confidence was there for doubles.

North Marion’s boys’ dropped to 0-2 on the season.

On the girls’ side, Fairmont Senior came away with a 6-1 win after its first doubles match solidified the overall match.

“I’ve been trying to teach the girls strategies,” Fairmont Senior coach Mark Giorcelli said. “Kids lack a lot of strategy. They know how to hit balls, but they hit back to each other and back to each other because that’s all they know. No one’s really worked with them to show them the angles and how to lob it over the net or draw them over to the net.”

Those strategies paid off for the Lady Polar Bears.

The match going on beside them, a heated one between two No. 1s, finished up just after with the team of Megan Branch and Alissa Link of Fairmont Senior (2-2) taking down North’s Kate Doshier and CJ Porter, 9-7.

About a half hour before the game, coach Giorcelli sat down with Branch and Link and drew a strategy on paper for their doubles match. The outcome?

“They played it to perfection. It was an awesome match,” the coach said. “I finally saw two girls learn something that took their game up a huge notch.”

For the Huskies (0-2), Doshier was able to pick up the only singles win on the night with an 8-1 win over Branch.

“Her net play was excellent,” North coach Mary Ann Mullenax said of Doshier. “I think maybe we need to work on our serves, though.”

Moving forward, Mullenax said her girls can pick things up and progress as the season grows.

“I think the thing we can get is focus,” she said. “And maybe be a little more mentally ready, too.”

Towns and Hoke were also able to beat Autumn Helgeson and Saccara Lee in doubles action for Fairmont Senior.

Both squads will be back on the court tomorrow with Fairmont Senior hosting Buckhannon-Upshur at Fairmont State and North Marion hosting Bridgeport. Both matches are scheduled to begin at 4 p.m.