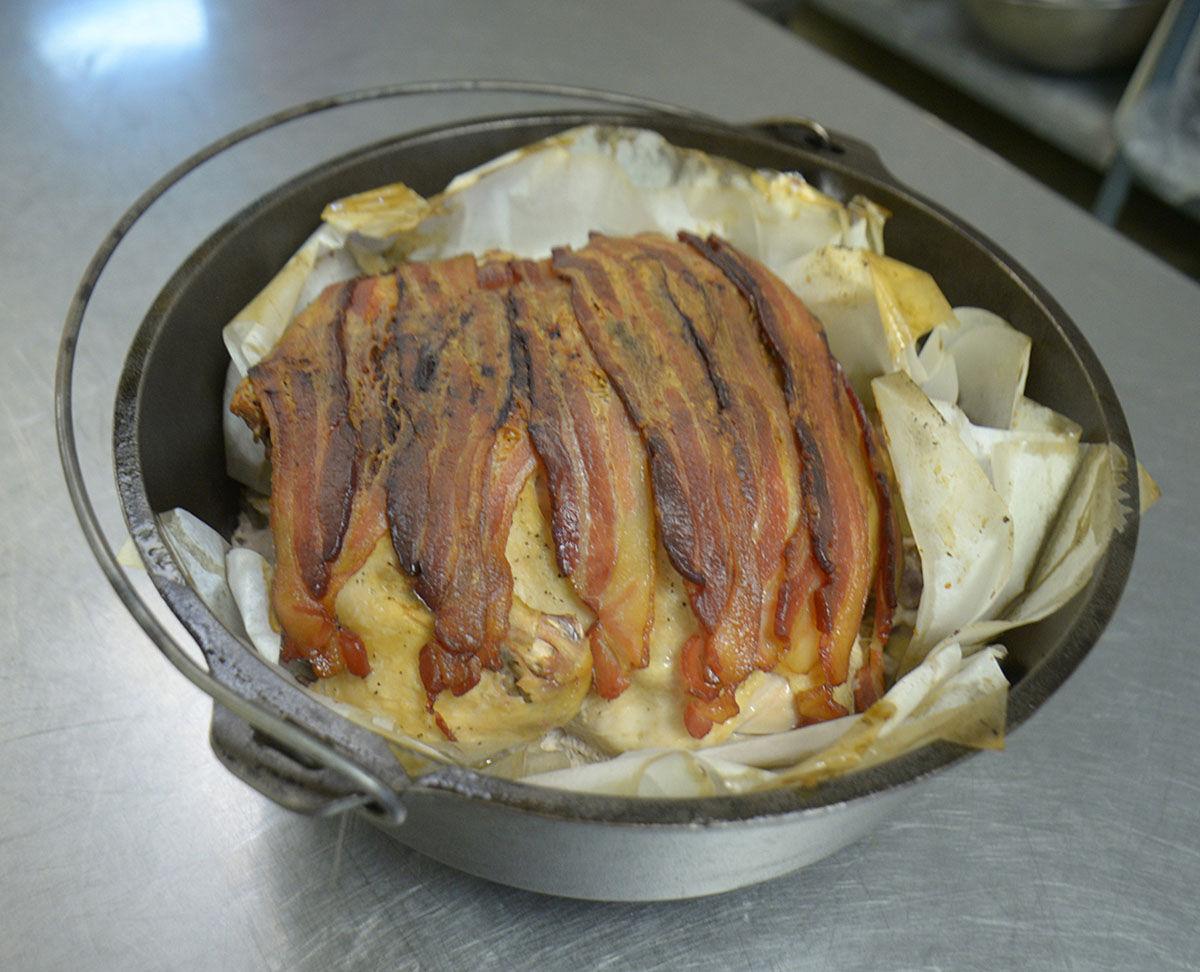 Pollo a la Roma, or chicken from Italy, is one of the recipes Antonini has had published in the Conners’ cookbooks. 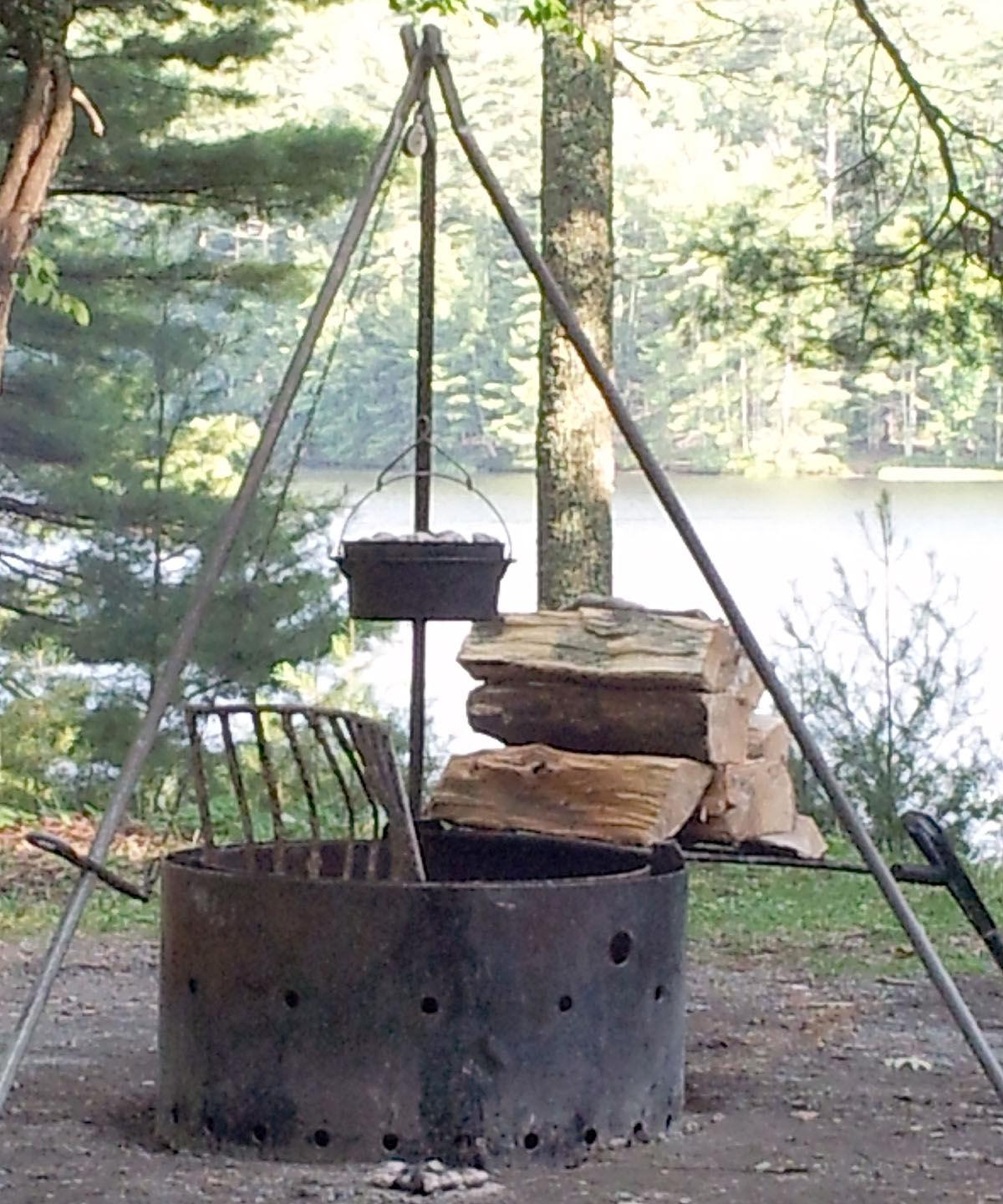 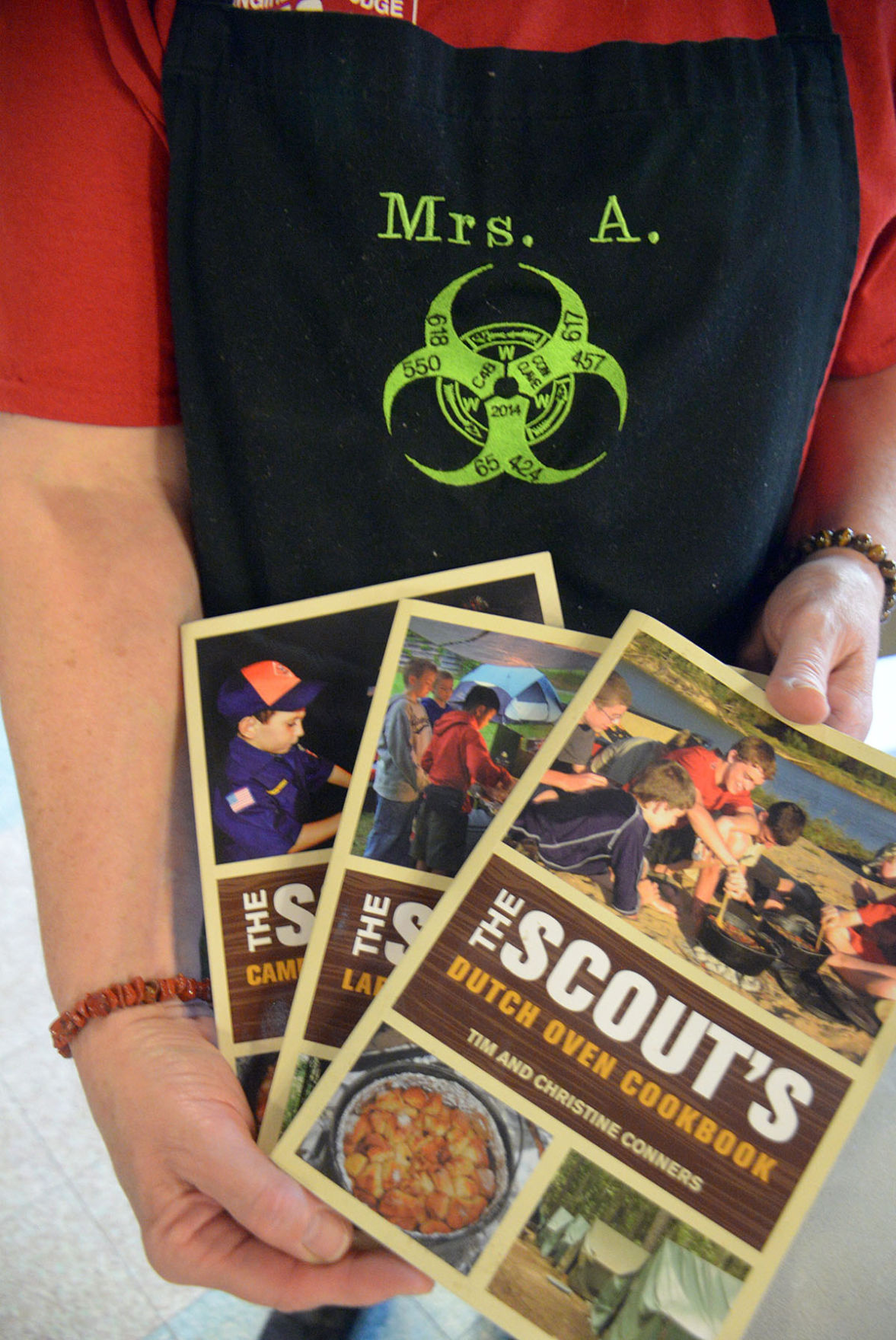 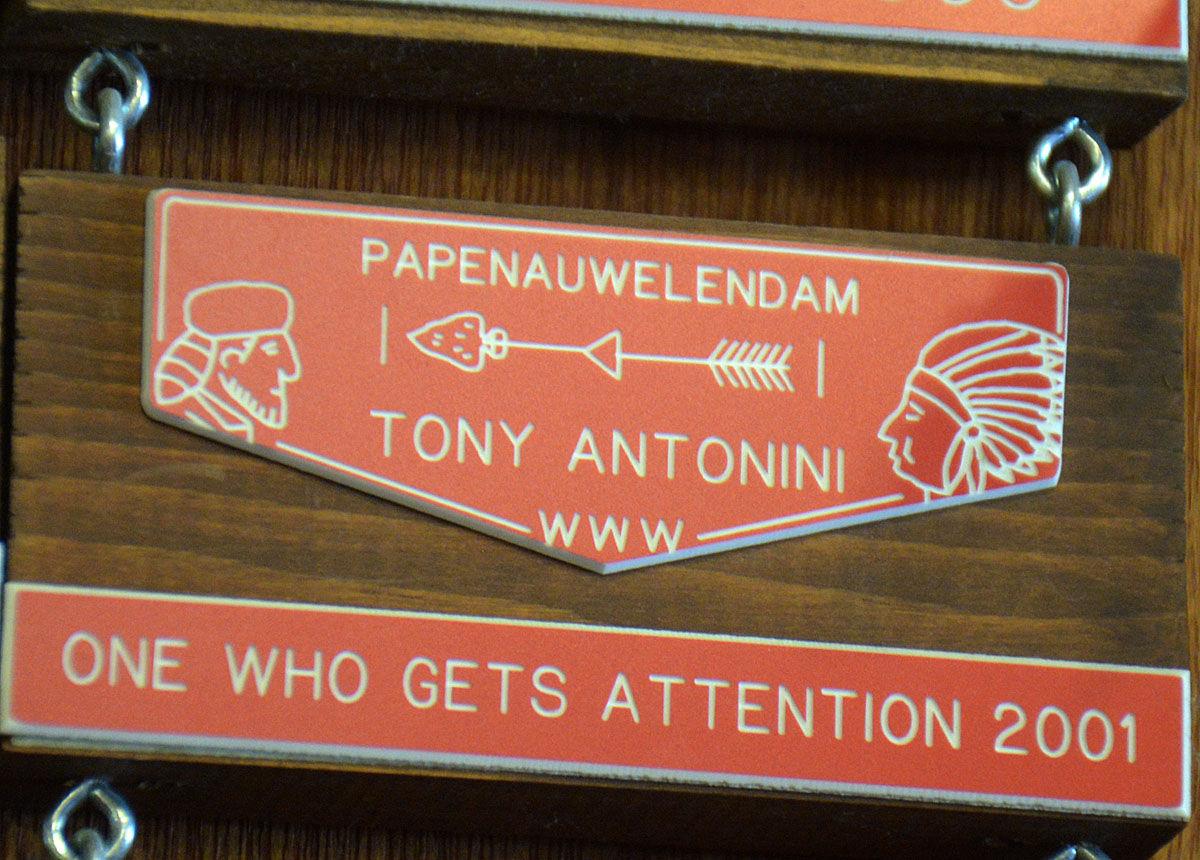 Bev Antonini’s son Tony became a Vigil Honor Member of the Order of the Arrow Menawngihella Lodge No. 550 in 2001. The plaque bearing his Indian name hangs at Camp Mountaineer. 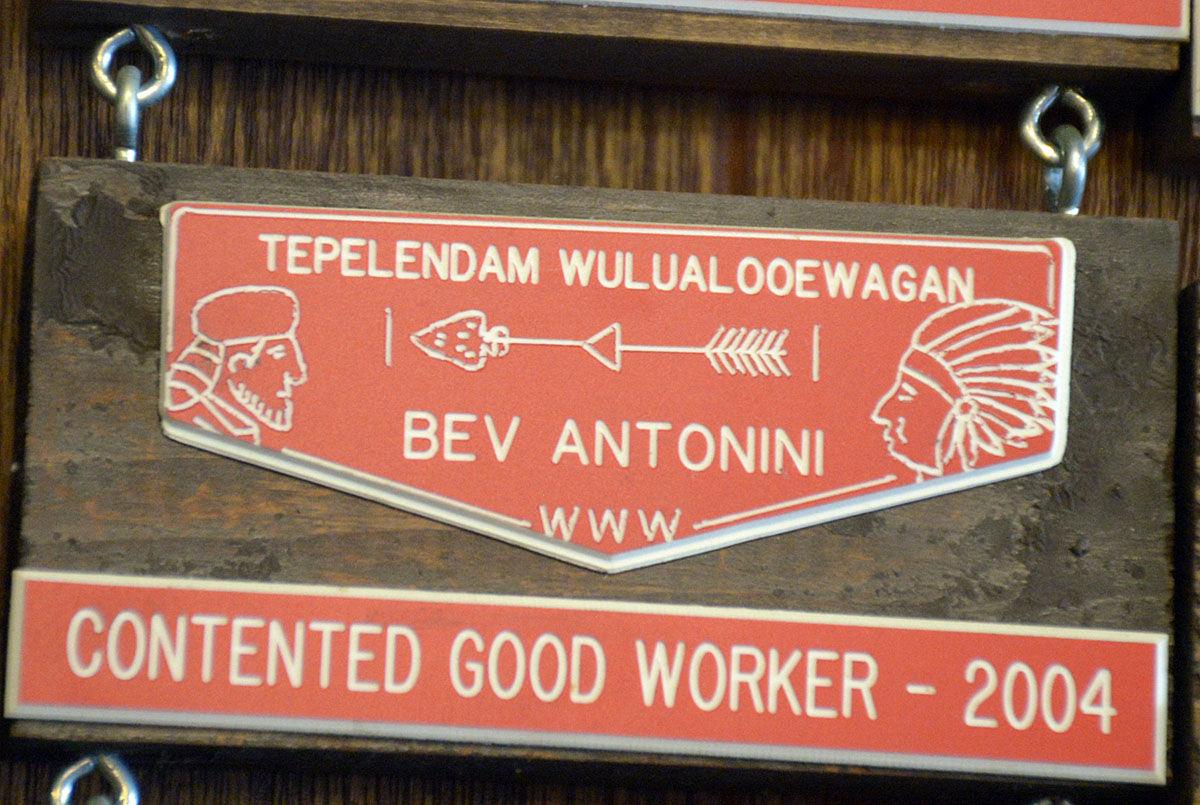 Bev Antonini became a Vigil Honor Member of the Order of the Arrow Menawngihella Lodge No. 550 in 2004. The plaque bearing her Indian name hangs at Camp Mountaineer.

Pollo a la Roma, or chicken from Italy, is one of the recipes Antonini has had published in the Conners’ cookbooks.

Bev Antonini’s son Tony became a Vigil Honor Member of the Order of the Arrow Menawngihella Lodge No. 550 in 2001. The plaque bearing his Indian name hangs at Camp Mountaineer.

Bev Antonini became a Vigil Honor Member of the Order of the Arrow Menawngihella Lodge No. 550 in 2004. The plaque bearing her Indian name hangs at Camp Mountaineer.

MORGANTOWN — Camping season is here, and although you may be roughing it without the modern conveniences of electricity or an oven, that doesn’t mean your meals are limited to a can of beans, peanut butter sandwiches and s’mores.  With a Dutch oven you can have a complete meal including dessert right over you campfire.

Bev Antonini has been in scouting for 28 years. She became involved with Boy Scouts of America when her son Tony was in the first grade and brought home papers to join the Cub Scouts.

In a sense, she joined the organization as well as an assistant den leader, then as den leader. As her son progressed through the ranks of scouting, Antonini also progressed.

Tony earned his Eagle Scout badge, and was voted into the Order of the Arrow, Menawngihella Lodge No. 550. Order of the Arrow is scouting’s National Honor Society. He is now a professional scouter with Boy Scouts of America working as a year-round camp director in Orange County, California.

“I am so proud of him,” she said. “His father, (Anthony), and I both are. (Anthony) has never been involved with scouting but has always been very supportive of Tony and I.”

When Tony turned 18 and was no longer in the Boy Scouts, his mother stayed on.

She is the assistant scout master of Troop 49 in Morgantown, the same troop her son was a member. She is also cook for the Order of the Arrow.

Antonini fell in love with Dutch oven cooking in 1997 when she attended a Dutch oven demo given by Annette Tanner at Camp Mountaineer.

“I asked her if there was anything I could do to help,” Antonini said. “She gave me some ingredients and a Dutch oven, and after that I was hooked. It is just so amazing. Whatever you can make at home in the oven or on top of the stove, you can do in a Dutch oven either with charcoal or right down in the fire.”

“I’ll make the same recipe at home with the same ingredients,” she said, “but when I make it in a Dutch oven, same ingredients, same everything, it tastes just a little bit different. It tastes like Boy Scout Camp.”

Antonini and Tanner will give a Dutch oven demonstration their week of Boy Scout Camp.

“On Wednesday we do a Dutch oven demo,” she said. “I will bring my three Dutch ovens and she will bring her four. We will invite anyone at camp to bring their Dutch oven. So we usually have seven to 14 Dutch ovens going that day. At four o’clock anyone who wants can come down and sample what has been made.”

It was through her demonstrations at camp that many have learned the art of Dutch oven cooking.

“I learned everything I know about Dutch oven cooking from (Antonini),” Mike DeMary, Scout leader in Fairview, said. “She is a premier Dutch oven cook. She is a master.”

“Nobody can touch it. She is so good,” Margie Krueger, registrar and shop manager at Mountaineer Area Council Boy Scouts of America, said. “I have never been to anything where she has burned the dish. Most of us, when we do Dutch oven cooking, we can make charcoal really quick. She produces amazing meals that you would never expect to come out of a Dutch oven — cakes, pies, everything.”

Antonini likes to take recipes and adapt them, make them her own and turn them into Dutch oven recipes.

“I do a recipe I call Troop 49 Orange Cake,” she said. “It is just a yellow cake mix with a small box of orange Jell-O mixed in, topped with a powdered sugar and milk drizzle for the icing. Tony’s chocolate cake is a chocolate cake with softened cream cheese and a can of cherry pie filling.

“Both cakes are moist and favorites of Troop 49. In fact, it doesn’t matter which flavor of Jello I add. If I add cherry Jell-O, they still call it orange cake.”

She has had a total of 12 recipes published in three cookbooks written by Tim and Christine Conners.

Antonini connected with the couple when they were judges for Scouting magazine’s Great Tastes in Camp Cooking Contest in 2009.

“I thought to myself, ‘I’m going to send one in,’ but I didn’t tell anybody because I thought they would tease me” she said. “Several months later I came home from work one day and Anthony said, ‘You got a call from the scout office.’ I thought he meant in Fairmont. I said, ‘Aww, what did they want?’ He said, ‘You won some kind of contest.’ ‘You mean in Fairmont?’ ‘No, I mean from Texas.’ I said, ‘Oh my heavens. Where's the number?’”

One of the things that Antonini won was the Conners’ cookbooks along with a BSA Dutch oven and $200.

After that, Antonini got an email from Christine asking her to send in more recipes for the Dutch oven.

“We started emailing each other and it was like we became friends,” Antonini said. “I think she was desperate. She just needed recipes to fill her book.”

“That’s right, “ Shirley Moore, one of the OA cooks said. “She wanted to fill up her book with good recipes from a good cook.”

One of the recipes in the Conners’ book is Antonini’s Pollo a la Roma, meaning chicken from Rome.

The recipe was one she got while visiting Italy, the home land of her grandparents, and adapted to the Dutch Oven.

1 14-ounce can of chicken broth

About 2 pounds fresh vegetables such as celery, leeks, carrots and potatoes, all chopped into bite-sized pieces

1. Place chicken on trivet or rack in the Dutch oven.

2. Pour broth over chicken and place vegetables in the broth surrounding the chicken.

3. Rub the herbs and spices all over the skin, then drape the pancetta or bacon over the chicken.

4. Cook for about an hour using 21 coals on the lid and 11 briquettes under the oven. Refresh coals as required.