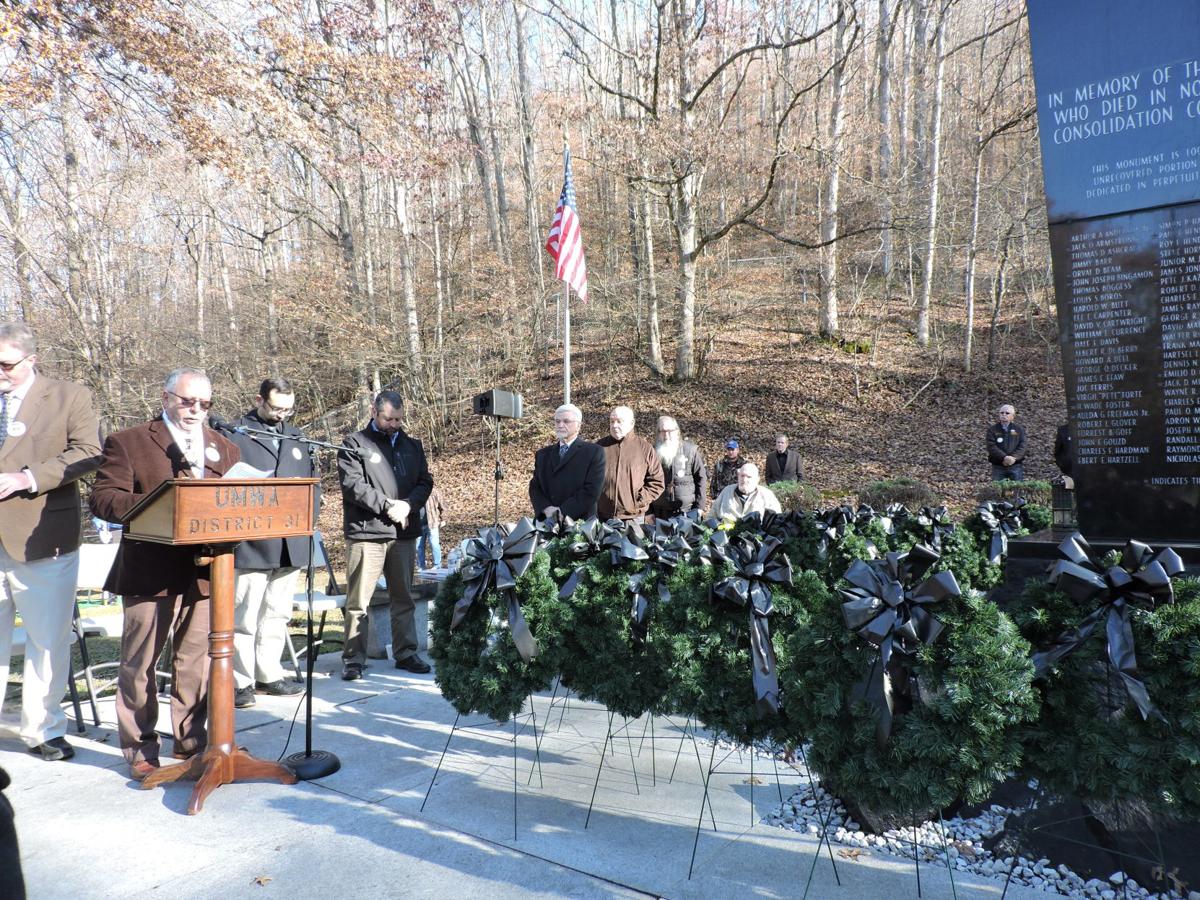 Mike Caputo reads the names of the 78 miners who died in the Farmington No. 9 mine disaster. 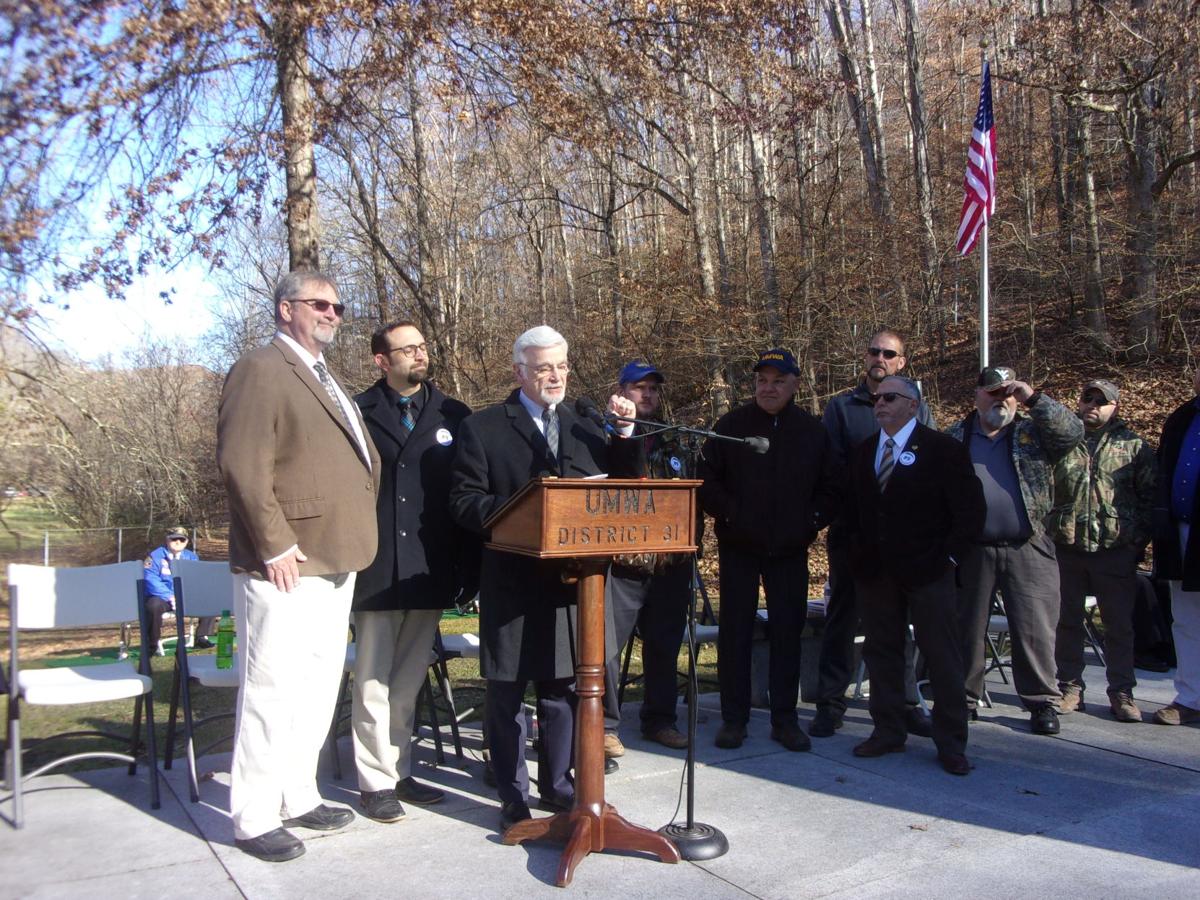 Mike Caputo reads the names of the 78 miners who died in the Farmington No. 9 mine disaster.

MANNINGTON — UMWA International President Cecil Roberts urged guests at the 51st Farmington No. 9 Memorial Service Sunday to never let the 1968 explosion that claimed the lives of 78 miners be forgotten.

“Continue to come here,” he told the estimated 250-300 people gathered at the Farmington No. 9 Memorial site near Mannington. “Don’t let them forget.”

About 50 wreaths with black ribbons were placed around the memorial, which is inscribed with the names of the miners who died. Each of the 78 names were read. Of those, 19 are entombed in the mine.

Roberts thanked the families of the miners who died in the 1968 explosion and fire at the Consolidation Coal mine for continuing to come to the memorial service each year. He said they inspire him to get up early and drive four and a half to five hours to the service.

“This event has grown every single year, as opposed to diminishing, and that’s generally what happens,” he said. “The farther away from something you get, the fewer people want to remember it, but not here.”

He told those attending that they were “doing a great service not just to the memory of these miners, but to their families and what this represents.”

Roberts noted how life-changing the tragedy was for the families of the miners who lost their lives.

“When they went out the door, his wife was his wife, when he went out the door,” he said. “She went to bed and before she woke up, she was his widow. That’s what happened here. While she was sleeping, she became a widow. You know what else she became? The head of the household. That’s what happened to her. While she was sleeping, she went from the wife to the head of the household, and then, in many instances, became an activist, a word she never used in her life and probably had to look up and find out what that meant. Widows started going to Washington.”

As the UMWA noted, Congress passed the nation’s first comprehensive mine safety and health legislation, the Mine Safety and Health Act of 1969, following the disaster.

Another speaker, David G. Zatezalo, Assistant Secretary for the Mine Safety and Health Administration, spoke about this aspect of the disaster.

“This tragedy from 1968 has ended up being a transformational event,” he said. “It’s provided subsequent generations of miners probably the best safety and health laws in the entire world, and that’s important.”

He added that it “resulted in the first time that we had an actual federal body with enforcement powers for health and safety laws.”

He said the laws continue to evolve.

Sharon Clelland, who sang the Star-Spangled Banner and Amazing Grace at the memorial service, was only 5 years old when her father, David Cartwright, died in the tragedy. She’s been coming to the service for many years, and has been singing the last eight.

Standing before the podium, Clelland’s voice carried over the grounds of the memorial, where trees stood sentinel in their fall coats and sunlight bathed the names of the fallen miners inscribed on the memorial. Many in the audience joined with Clelland as she sang Amazing Grace.

“It’s an honor,” she said of being able to sing at the memorial.

She remembered her father as an exceptional man with a strong faith.

“He was an outstanding man, good Christian,” she said. “He taught us all how to sing.”

Clelland said he had a love of Gospel singing.

She also has everyday memories of her father as he went about his routine.

“Most of the memories that I have, though, is like in the evenings when he got ready to go to work,” she said. She said she also remembers when he would come home.

When the tragedy that claimed the life of her father and the other miners took place, she said it was “very hard” for her family.

“There was a lot of hurt and a lot of hatred…knowing that this could have been prevented and it wasn’t,” she said.

Today, she said, it still hurts, but there is also some type of comfort knowing that other people’s lives have been saved as a result of the safety and health legislation that has been passed.

But Roberts reminded everyone that miners and the union must still remain vigilant, despite the gains in safety that have been incorporated into the miners’ contract.

“But you know right this minute, there are lawyers from New York and Chicago and advisors from other places, mainly from Wall Street, that say…’this company’s in bankruptcy and we’re terminating this contract when we get down to the bankruptcy court,’” he said. “We’re going to have to stand up, brothers and sisters, again. I hate to mention that here, but I would be derelict in my duty, I would be dishonoring these people who fought for these things.”

“We need safe mines so this never happens again,” he said, to applause and cheers.

At the end of his remarks, Roberts asked, “why is it that coal miners are always called upon to stand up and fight back?”

“I’ve got the answer for you,” he said. “Think about this tonight. Because God knows we can handle it.”

Levi Allen, UMWA International Secretary-Treasurer, was another of the speakers.

“And as we stand on this hallowed ground, we must remember that our foundations aren’t hollow…that the voids and the recesses in this earth are still being held up by the will and by the blood and by the souls of our brothers and sisters who defied gravity and braved the darkness and fought every single day for the simple things in life, the simple things that people take advantage of on a regular basis, like a roof over our heads and food on our table and clothes on our back.”

Some of the many others present at the service were Rick Altman, International District 31 Vice President, who served as master of ceremonies; Larry Knisell, who led the Pledge of Allegiance; Rev. D.D. Meighen, who said the invocation; House of Delegates Member Mike Caputo, who recited the roll call; Father Rodney Torbic, who said the benediction; and VFW Post #9916 with the rifle salute and Taps.