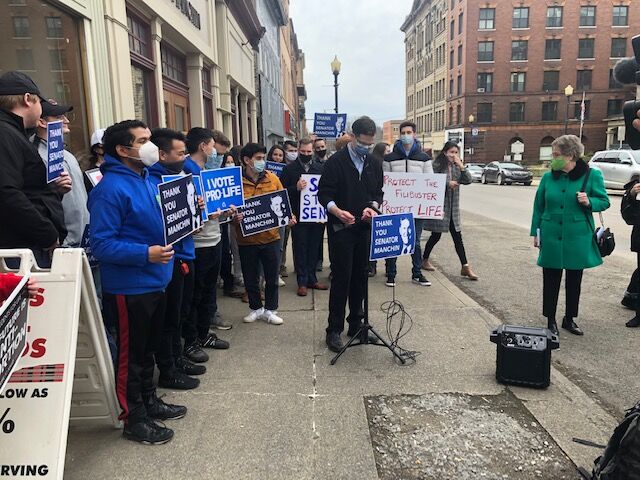 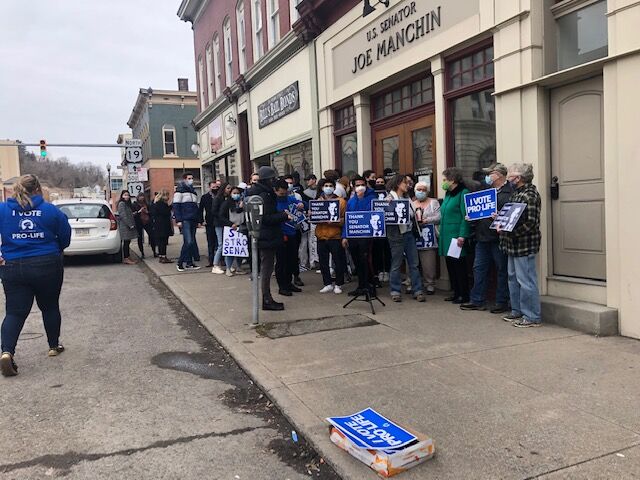 Activists stand in front of U.S. Sen. Joe Manchin’s Fairmont office Friday, to thank him for standing up for pro-life policy.

Activists stand in front of U.S. Sen. Joe Manchin’s Fairmont office Friday, to thank him for standing up for pro-life policy.

That was the cry of a group of activists Friday as they toted signs outside the Democratic senator’s office on Adams Street downtown, thanking him for standing strong on a pro-life filibuster.

The national pro-life group Susan B. Anthony List, which is based in Washington, D.C., joined state and local pro-life activists for a three stop tour in West Virginia, starting in Charleston and ending in Wheeling.

Marilyn Musgrave, vice president of government affairs for the organization, said the the filibuster is what is standing between the abortion agenda.

“And yet we have Joe Manchin courageous enough to stand up to his own party and say he’s going to do the right thing and I tell you the people of West Virginia agree with him,” said Musgrave.

Musgrave said a large majority of people have said tax dollars should not pay for abortions in the U.S. or overseas.

“This is so significant in saving babies that have not yet been born,” said Musgrave.

In the three-stop tour, Musgrave said she has been talking with people around the state who admire and respect Manchin’s courage.

“This is a strong pro-life state and he’s representing those values very well when he retains the filibuster,” said Musgrave.

The Susan B. Anthony List is a pro-life organization that works to elect pro-life candidates, said Musgrave.

“The thing about the filibuster that is so remarkable, it prevents the majority from enacting extreme things without any support from the minority,” said Musgrave.

Musgrave said she came to Fairmont on Friday to make a commitment that as long as Manchin stood with pro-life West Virginians she will continue to stand with him.

Several people spoke in favor of the pro-life movement and voiced support for Manchin. Tina Whittington, executive vice president of Students for Life of America said she took part in the event Friday to represent West Virginia students.

“Senator Manchin’s votes have been critical in federal policies and he has been in a unique position of representing his political party but also representing real West Virginians and sometimes they don’t see eye to eye,” she said.

Whittington said, without the filibuster, extreme legislation would be imposed on citizens that erodes the law and also the values of Americans. Students for Life represents Millennials and Gen Z.

“Usually people believe Millennials and Gen Z are the most supportive of abortion but we’ve found that this is just not true,” said Whittington.

She said the group had just commissioned a poll by Blankenship Polling that found overwhelmingly that West Virginians oppose taxpayer-funded abortion and oppose expanding the Supreme Court.

“Seventy-five percent of voters believe that Joe Manchin should stand with West Virginians even if it means voting against his party so that’s why we’re here today,” said Robertson.

The group out in front of Manchin’s office was a younger crowd and Robertson said when people realize the extreme precedence in the law they often reject it, even young people.

“When there’s so much going on in our country that puts women in danger. If Democrats get their way, abortion would be enshrined in national law. It’s so encouraging to see this message is one that resonates with young people, West Virginians and people all over the country,” said Robertson.