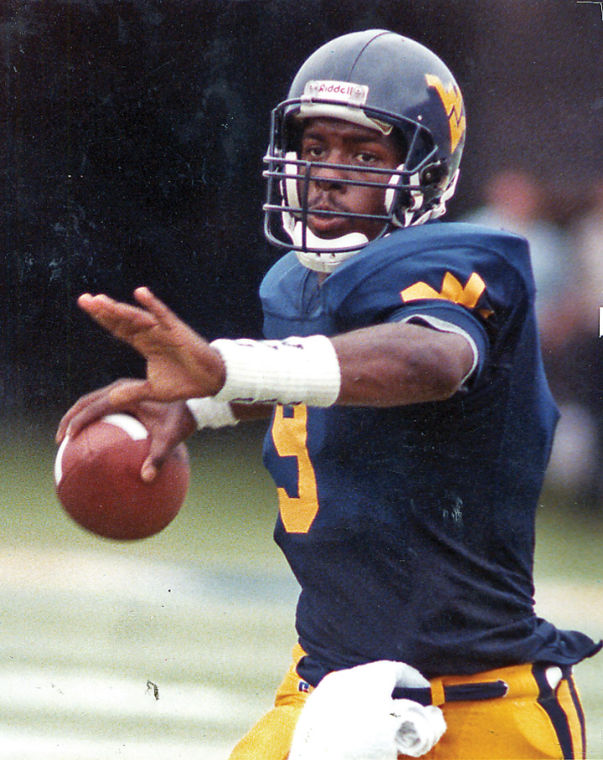 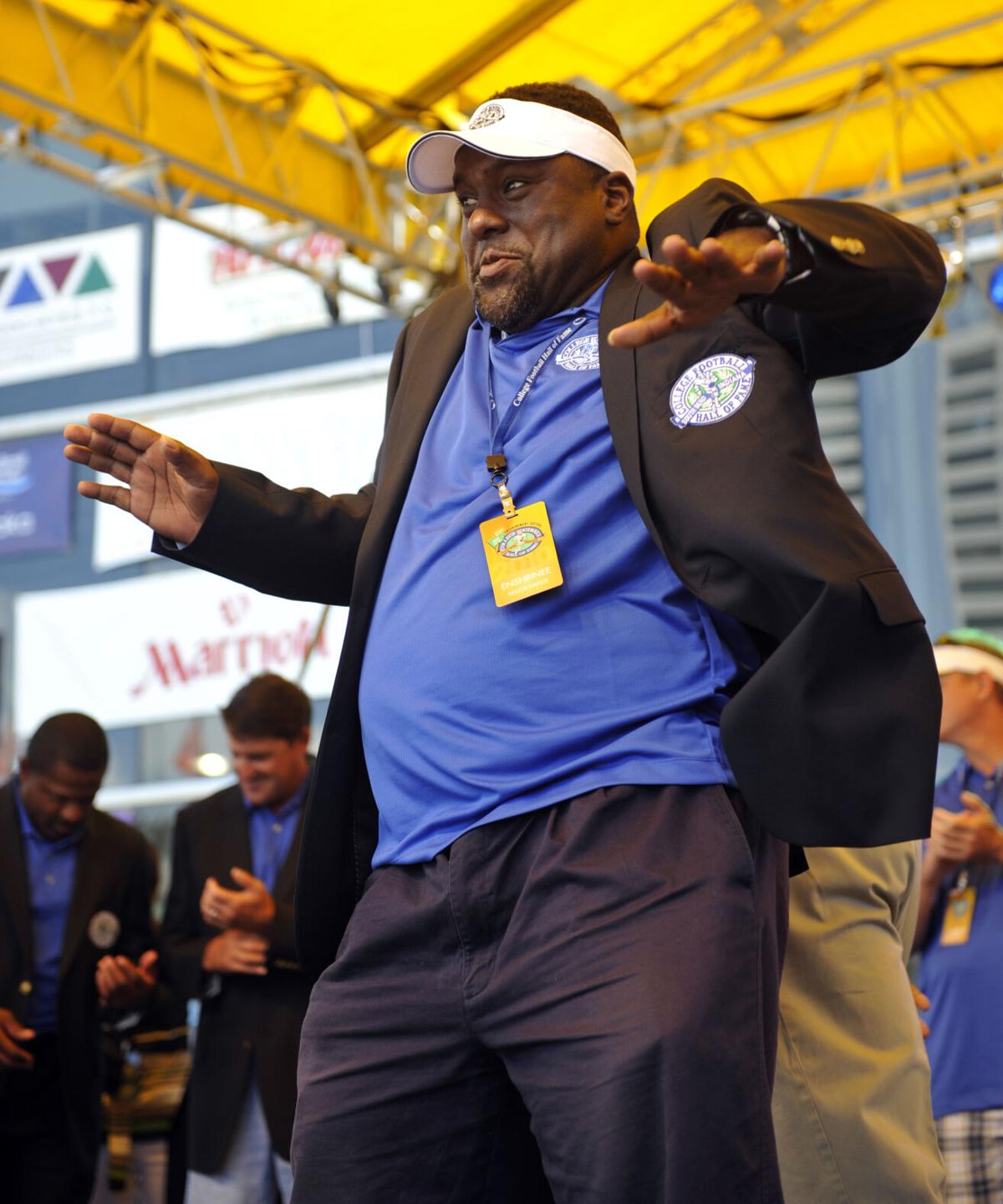 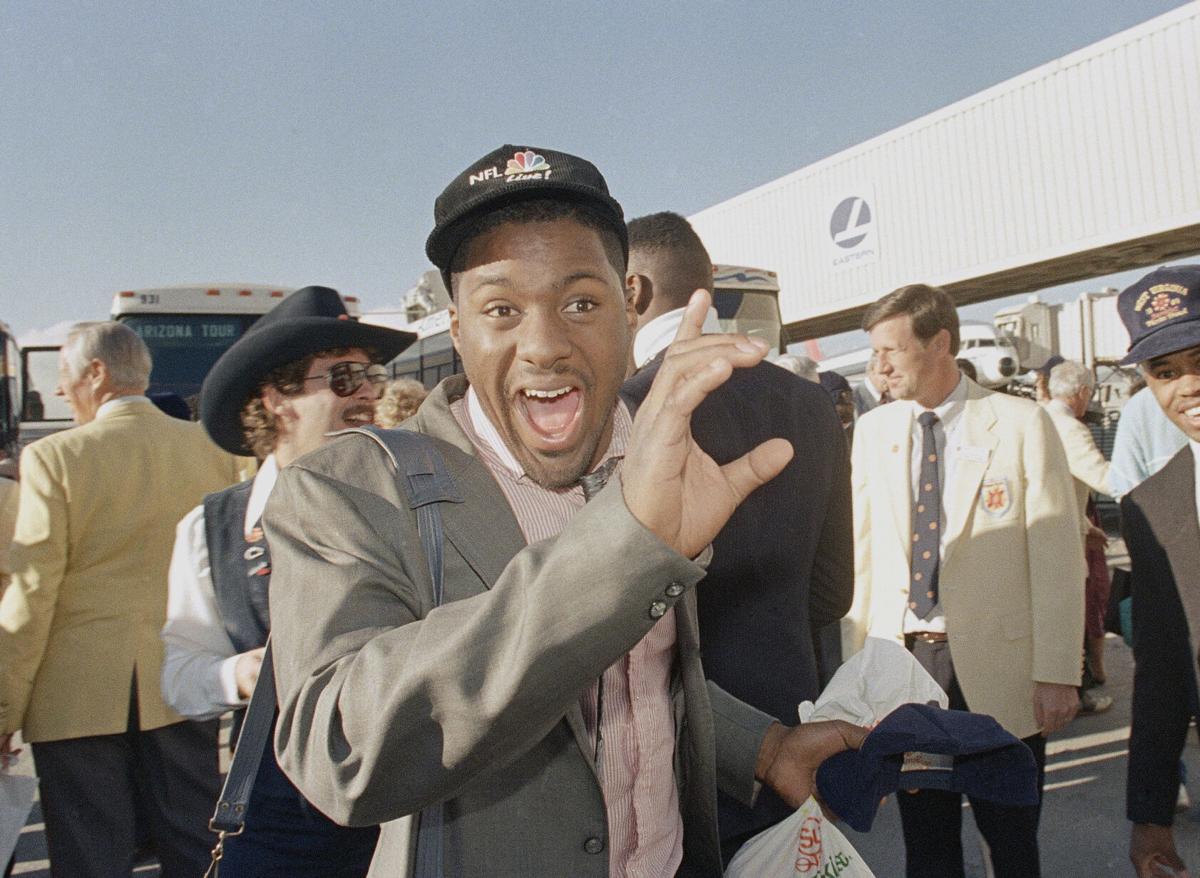 West Virginia quarterback Major Harris was in high spirits as he arrived in Phoenix on Dec. 26, 1988 in preparation for their game with top-ranked Norte Dame in the Fiesta Bowl. 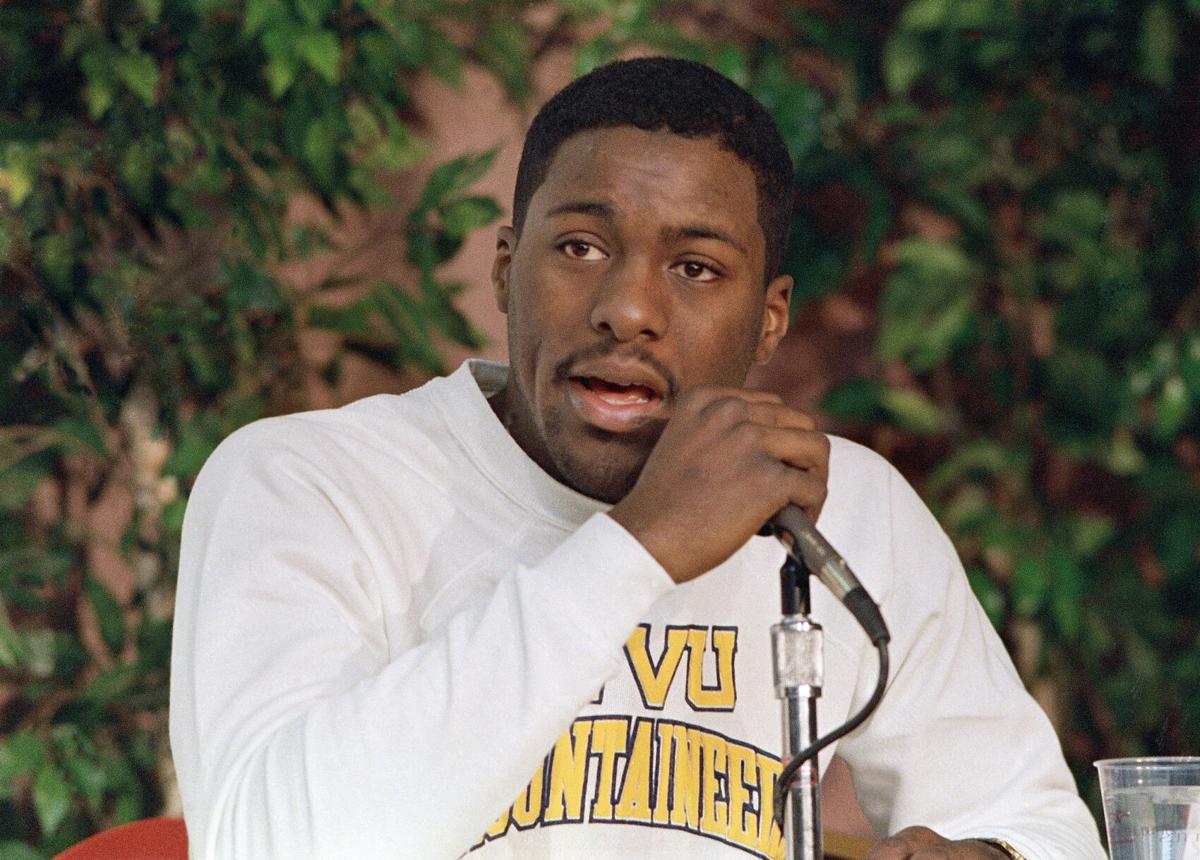 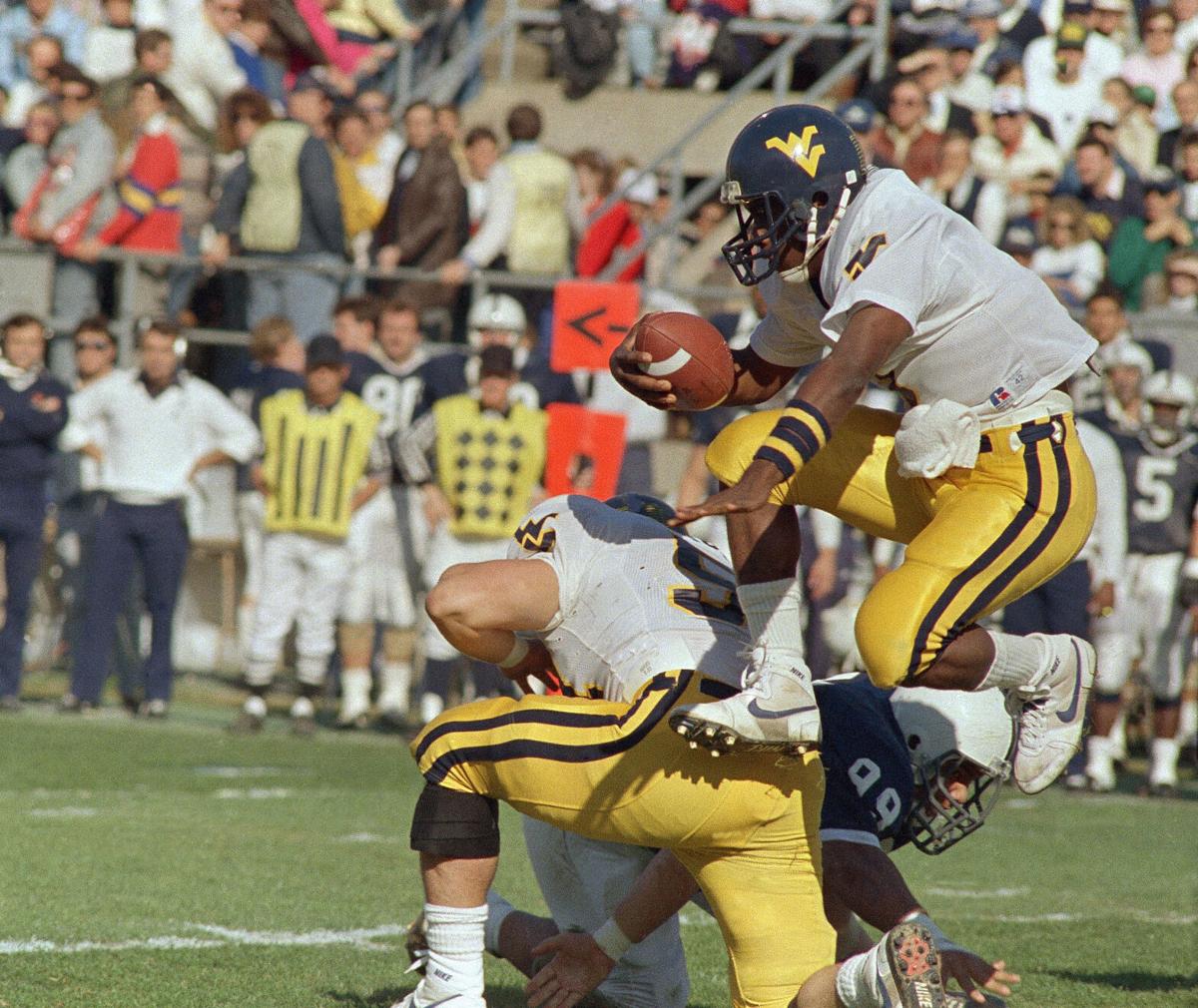 Major Harris, West Virginia quarterback, leaps over Penn State defender Aoatoa Polamalu gaining a 1st down on a play option run during a game at State College, Pennsylvania in 1987. 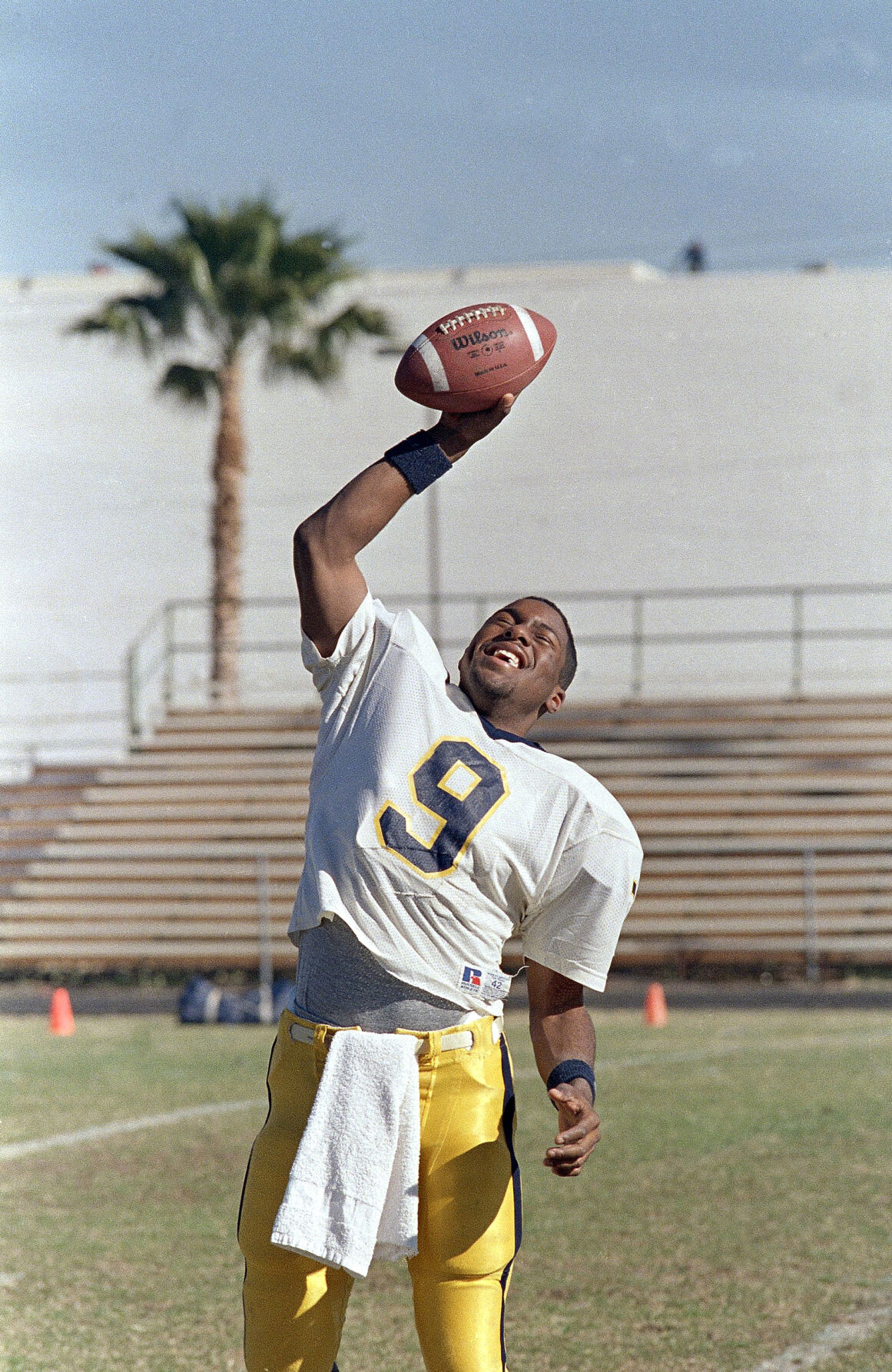 West Virginia quarterback Major Harris, tosses a football in the air during practice in Phoenix on Wednesday, Dec. 28, 1988.

West Virginia quarterback Major Harris was in high spirits as he arrived in Phoenix on Dec. 26, 1988 in preparation for their game with top-ranked Norte Dame in the Fiesta Bowl.

Major Harris, West Virginia quarterback, leaps over Penn State defender Aoatoa Polamalu gaining a 1st down on a play option run during a game at State College, Pennsylvania in 1987.

West Virginia quarterback Major Harris, tosses a football in the air during practice in Phoenix on Wednesday, Dec. 28, 1988.

West Virginia quarterback Major Harris, whose No. 9 uniform will be retired on Nov. 6 during the Oklahoma State game— the fifth such player to be so honored in Mountaineer history— was the quarterback of the future before the future arrived.

“Major was such a raw talent, if he were playing today where they spread the defenses from sideline to sideline, he would have been something else. It’s a shame, he was 10 years ahead of his time,” said his Hall of Fame coach Don Nehlen upon learning of the honor.

Harris, who would join his coach in the College Football Hall of Fame, was discovered by Nehlen in a touch football game at one of WVU’s football camps.

He went on to lead the Mountaineers to an unbeaten 11-0 regular season in 1988 before suffering an injured throwing shoulder early in a Fiesta Bowl showdown with No. 1 Notre Dame for the National Championship.

While Harris gutted it out and played on, the WVU offense that had scored 30 or more points in 10 of the 11 regular-season games was held to just 21 points in a 34-21 defeat at what was their best chance ever to win a National Football Championship. Harris ran 13 times and netted just 11 rushing yards and complete 13 of 26 passes for 166 yards with a touchdown and interception against Notre Dame.

As a player, Harris’ numbers are not at the level of some of those who came after him, most notably Patrick White, who had a similar style, but that was because Harris was before his time and the game was played quite differently.

But, as it was, he was the kind of performer who combined great running skills with a strong throwing arm. Each time he had the ball everyone within the stadium gasped in anticipation while the defense simply held its breath.

In that 1988 season, he accounted for 2,525 yards of total offense and 20 touchdowns, a school record at the time that he would break the next season.

He left school with a year’s eligibility left following the 1989 season with a school record 7,334 total yards, a mark that stood for a decade until Marc Bulger came along with his high-tech passing game. Even today, Harris’ three-year total offense figure ranks seventh in school history.

“He made a big mistake coming out early,” Nehlen maintains. “As a coaching staff we were going to experiment with him and start to do some stuff in the passing game we hadn’t done before.”

As it was, Harris was not seen as an NFL quarterback, not being taken until the 12th round by Oakland, who sent him off to Canada to play. Could he have played NFL quarterback? Well, his final game in Canada saw him run for two touchdowns and throw for two others, but his career was over.

“I’m not bitter about my career went because every time I was given an opportunity to play, I delivered,” Harris once said.

It took a visionary like Nehlen to see what Harris was capable of doing.

“Major is quite a story,” Nehlen began. “Here’s a kid who went to Brashear High School in Pittsburgh, played wishbone football, was not recruited. Because of the kind of football he played in high school, no one knew about him.”

So how he did wind up being recruited at West Virginia?

“To be honest, we found out about him in our camp,” Nehlen said.

“The camps today are centered on recruiting,” Nehlen said. “When we had our camps, we just had fun with these kids and we played touch football at night.”

It was one of those nights that Nehlen was down on the field, watching a touch football game transpire among the high school kids.

“I’m seeing this kid running all over and nobody can touch him. I’m thinking to myself, ‘If no one can touch him, how in the world are they going to be able to tackle him,’” Nehlen remembered.

Assistant coach Dave McMichael was recruiting western Pennsylvania then, and he went to Major’s coach and asked ‘What about this guy? He’s something else. His size, his calves, he’s some athlete. We’re going to recruit this guy. He’s an athlete.”

“He didn’t have all the big stats. Not many people knew about him. I think Arizona State was going to recruit him, but they wanted him as a defensive back. I mean, he was down the street from Pitt and I think if they would have offered him, he would have gone to Pitt.”

The only question left to Nehlen was not whether or not he wanted to recruit Harris, but how to work out what could have been a budding quarterback situation.

WVU also had recruited a quarterback named Browning Nagle, who was also made of the right stuff, as proven when he was drafted in the second round of the 1991 NFL draft with the 34th pick by the New York Jets after he had transferred from West Virginia to Louisville.

How good was Nagle? Well, the player selected with the 33rd pick in that draft was a quarterback you may have heard of, name of Bret Favre. His last game at Louisville under Howard Schnellenberger was the 1991 Fiesta Bowl where he won MVP honors with a record-setting performance of 451 passing yards against Alabama.

Nehlen was faced with a dilemma of sorts, having recruited maybe the two best QBs ever at WVU up to that point in the same year.

“So now I got Browning Nagle and Major Harris both in the same class and one is the complete opposite of the other. They don’t fit as far as the scheme of things are concerned,” Nehlen said.

So why did he lean toward Major, a decision he never would regret?

“It was a lot easier for Major to play in the system we were playing at that time than Browning Nagle. We were not a sophisticated passing team then. We didn’t have man protection and zone protections and all those protections you need in a drop-back passing game. We had play-action pass protection and we had option football, so we decided to go with Major.”

“I told Browning, you know what, if I were you, I’d transfer. You’re both in the same class and I can’t play two quarterbacks.”

And so it was that one WVU recruiting class produced two of the greatest quarterbacks to ever play at two different schools.

Harris’ accomplishments are legendary, including having made perhaps the greatest run in school history, a 26-yard touchdown as WVU beat up on long-time rival Penn State, 51-30, in 1988.

It came on a play when Harris ran the wrong way with the ball, zigging and zagging his way through the Penn State defense to the end zone.

“We called 37 and he ran 36. It worked like it did because Penn State was so well coached that when they saw everyone running 37, they went that way and by the time they realized Major had taken off and was running the opposite way with the football,” Nehlen said, laughing as he replayed that play in his mind.

And when he came back to the sideline, he wasn’t celebrating by any means.

In fact, he might have been the only player ever to apologize for scoring a touchdown.

“Major, don’t worry about it. The results were pretty good,” Nehlen said.

They always were. In 1988 he outgained Boston College in total offense, 372 to 319 totals yard while accounting for five touchdowns and the next year outgained Penn State in front of their home fans, 301 to 262 yards. That helped him finish third in the Heisman Trophy voting, which remains today the best showing ever by a Mountaineer.