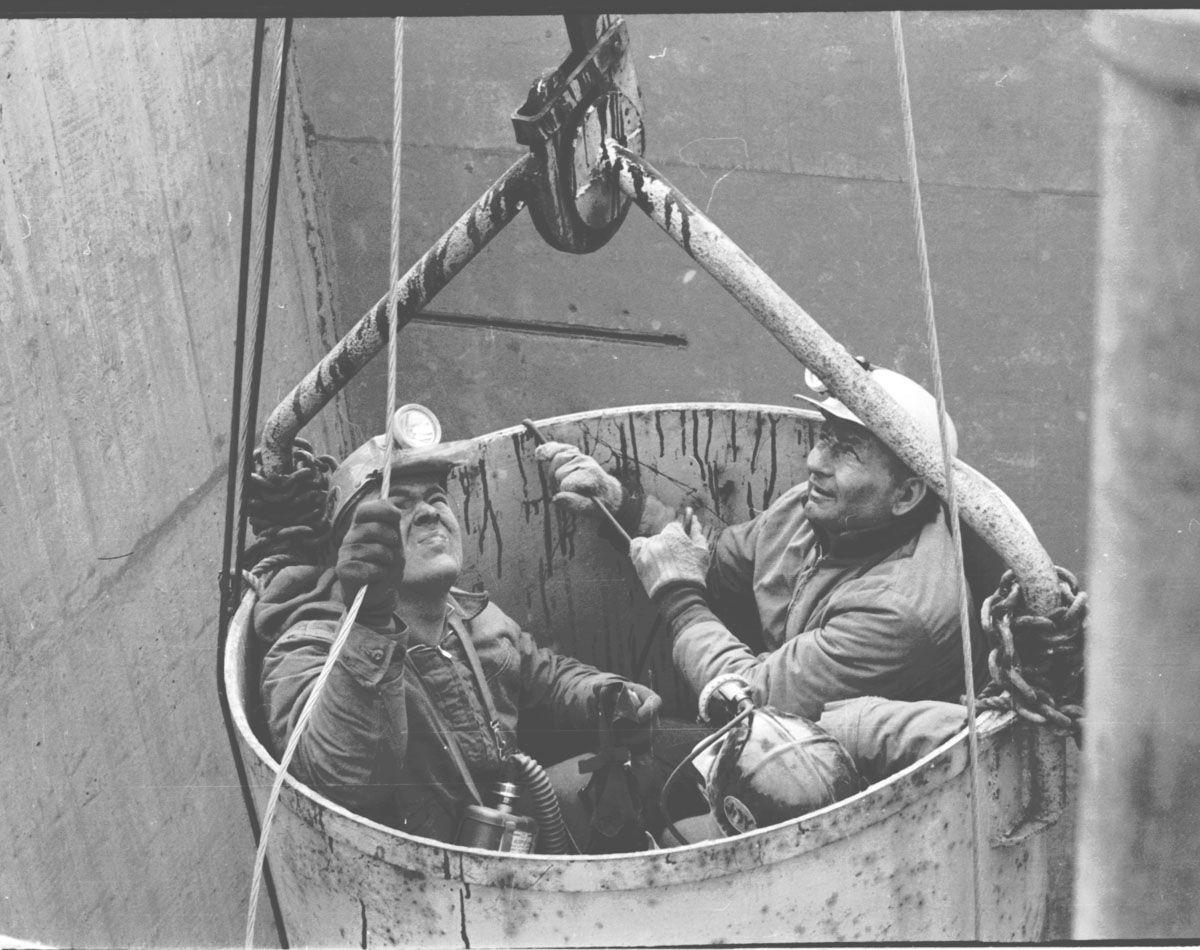 Gary Martin (left) and Bud Hillberry (right) and an unidentified man are hoisted from the Farmington No. 9 mine. They were the last men to escape the disaster alive. 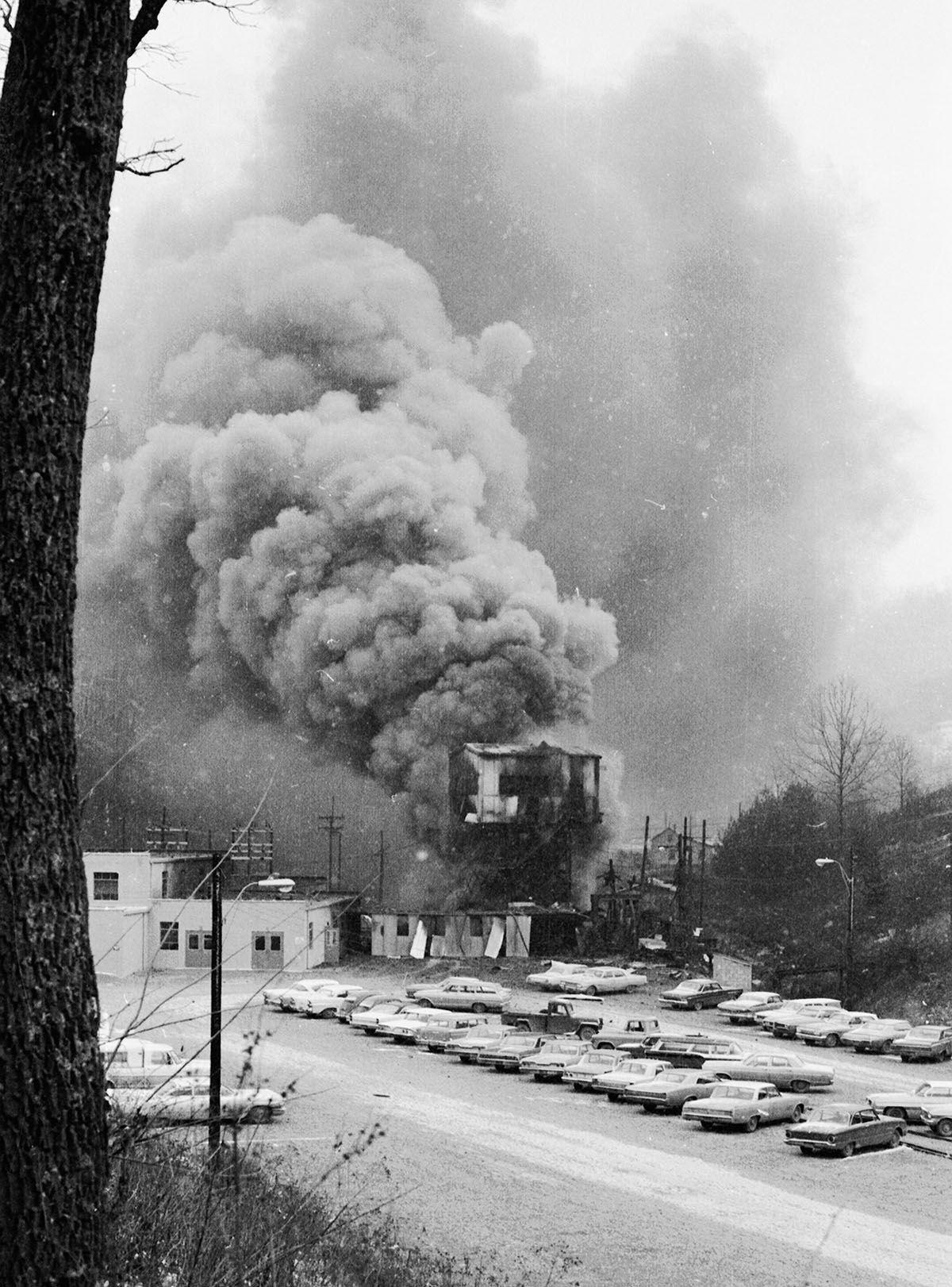 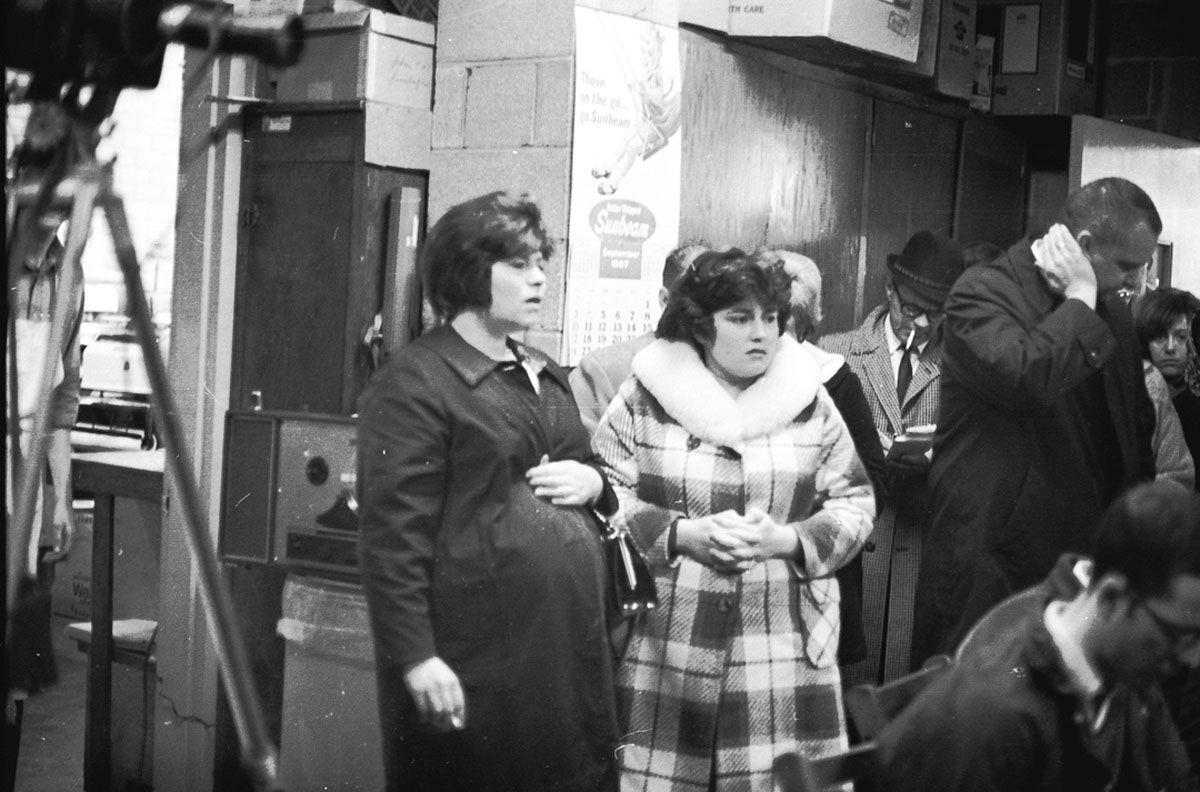 The pregnant wife of a trapped coal miner waits for news in the company store near the No. 9 mine. 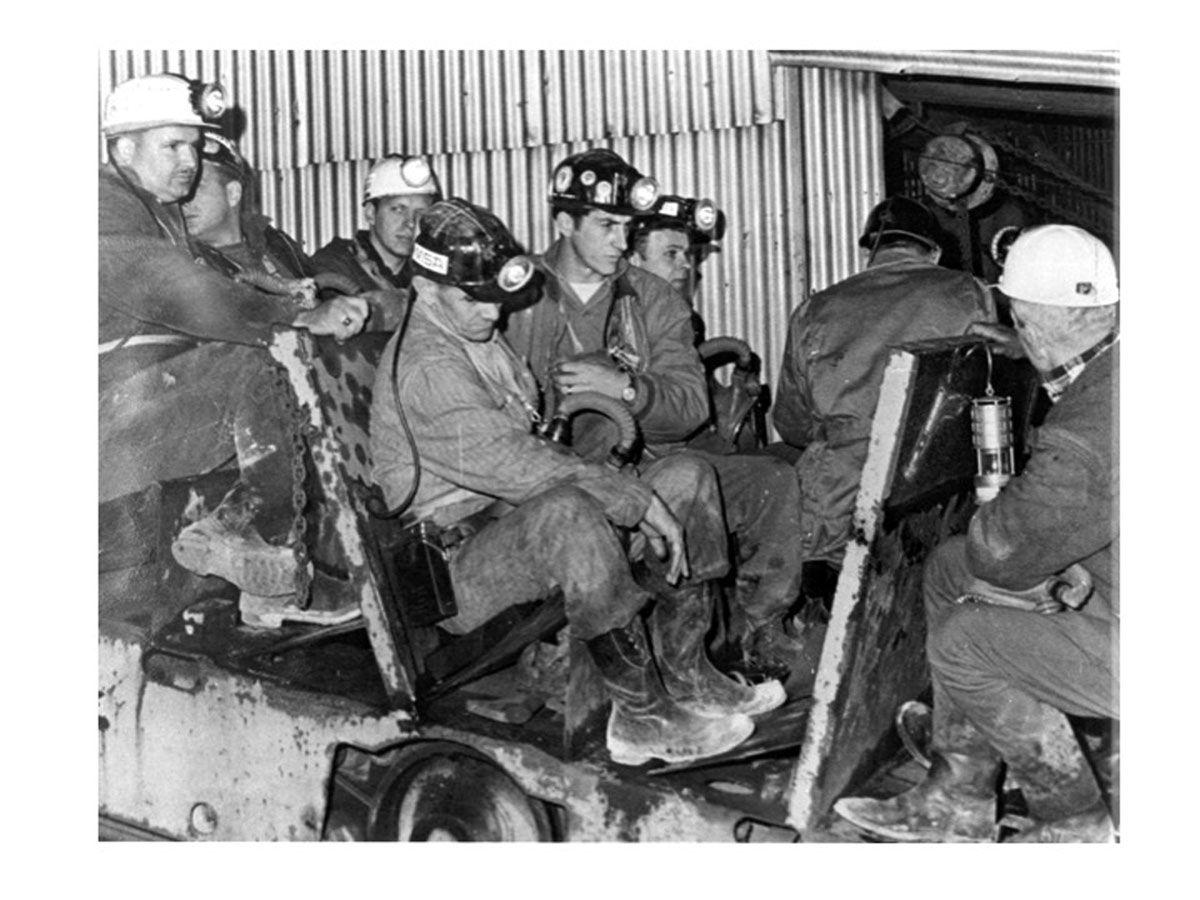 A recovery crew prepares to go underground at the No. 9 mine to begin looking for bodies. 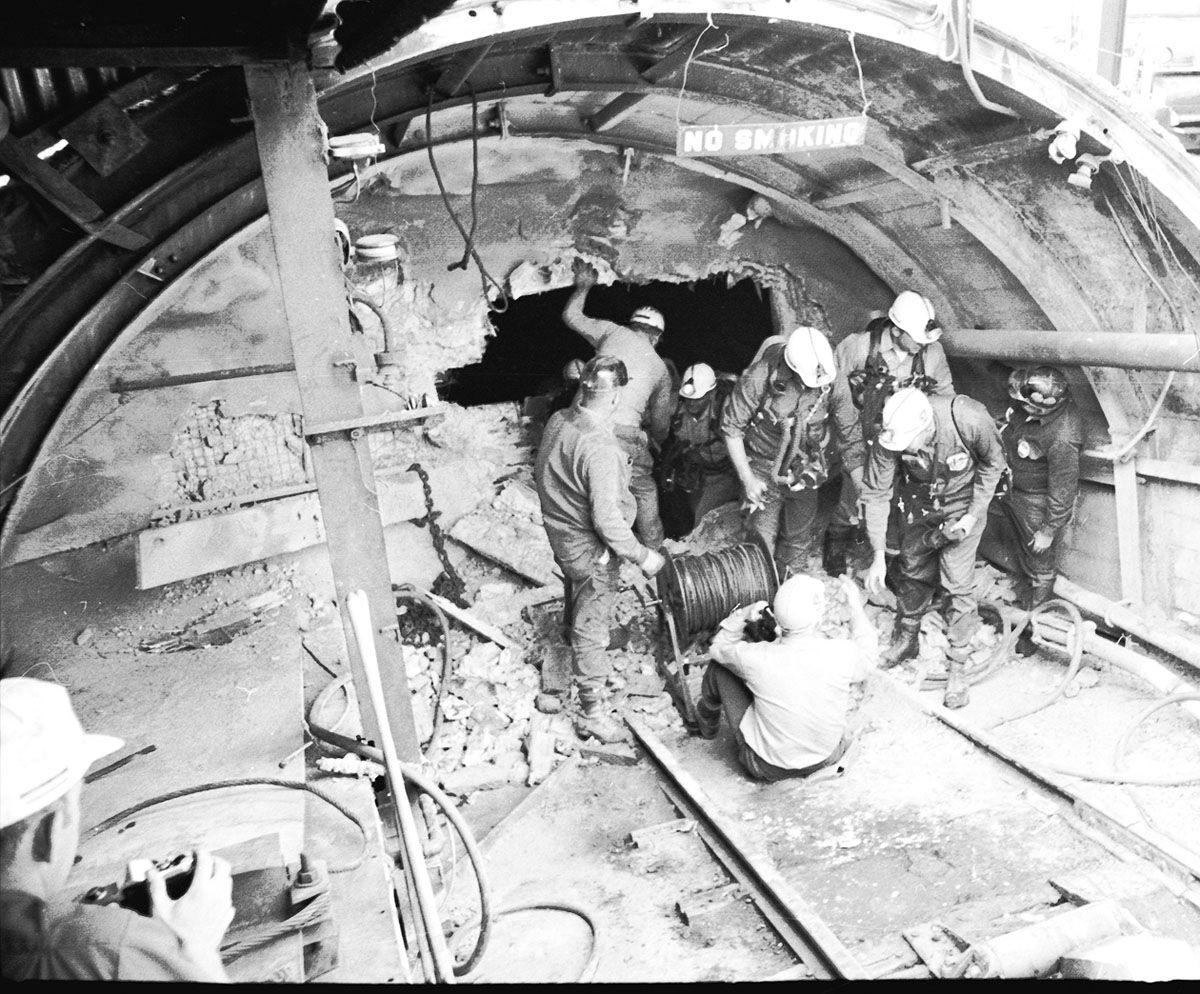 Recovery workers unseal the opening to No. 9’s slope. 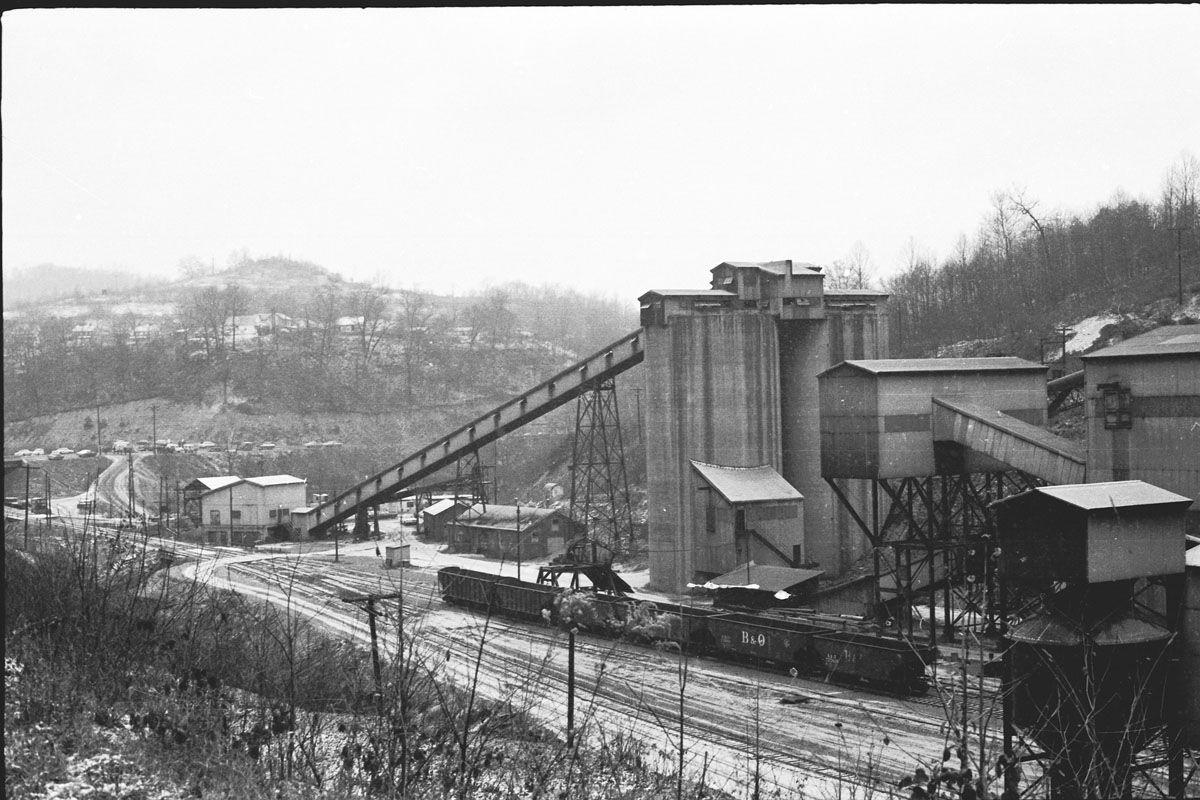 No. 9’s preparation plant operated near the No. 1 fan and the slope by which some men entered the mine. 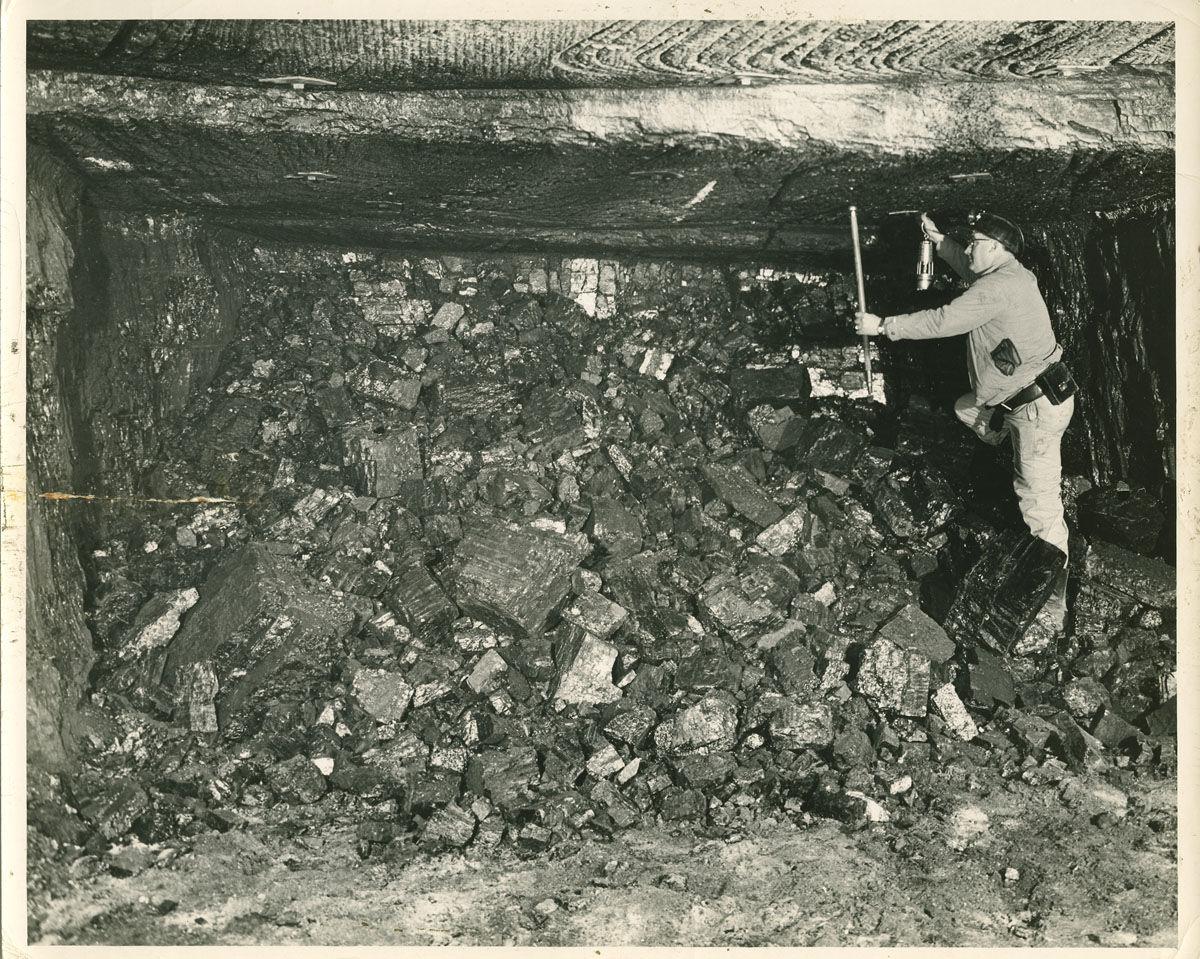 A coal miner uses a flame safety lamp to check for methane in an underground mine. A flame grows in the lamp in the presence of methane. 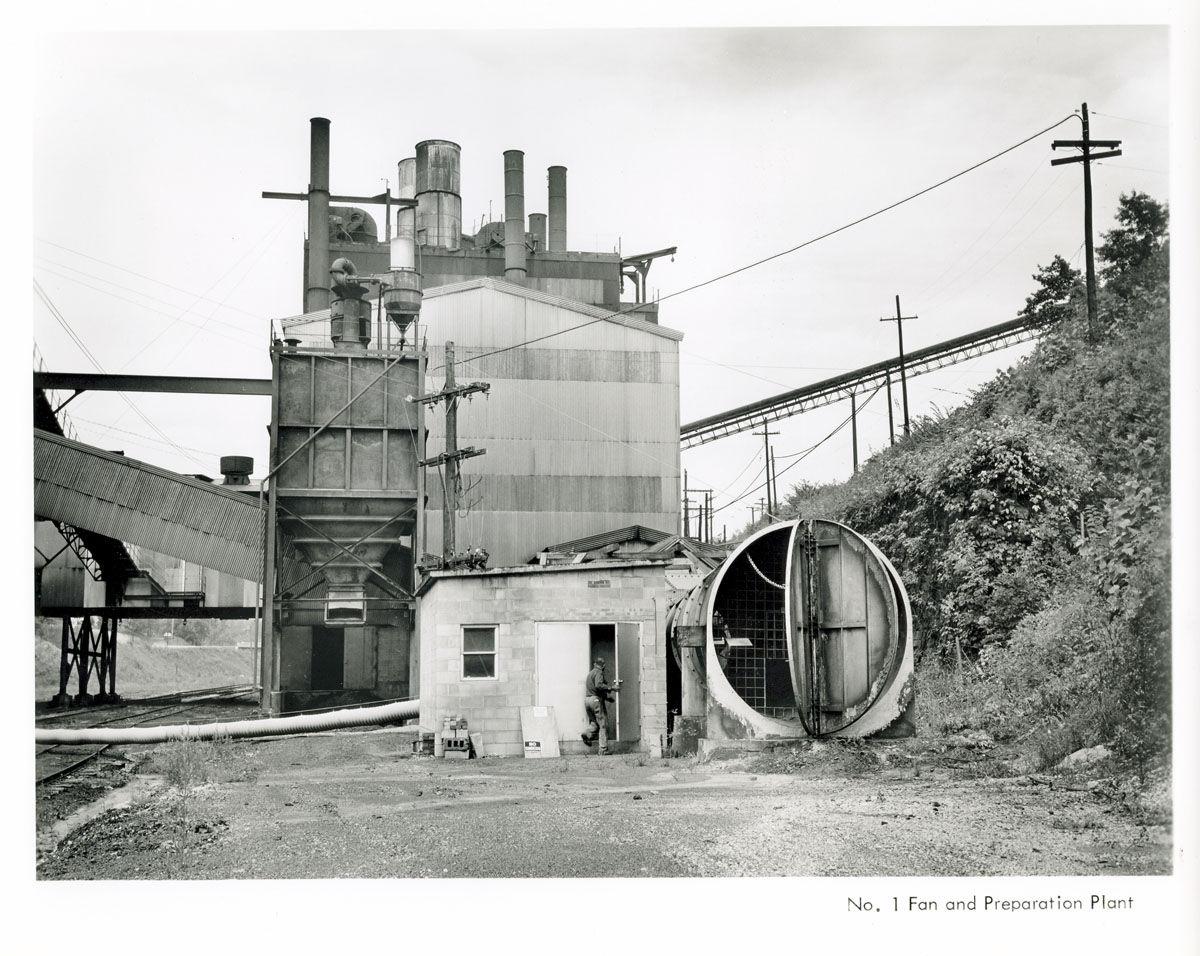 The No. 1 fan shaft (large circular figure) sits next to No. 9’s preparation plant, where the coal was cleaned and loaded for shipping. 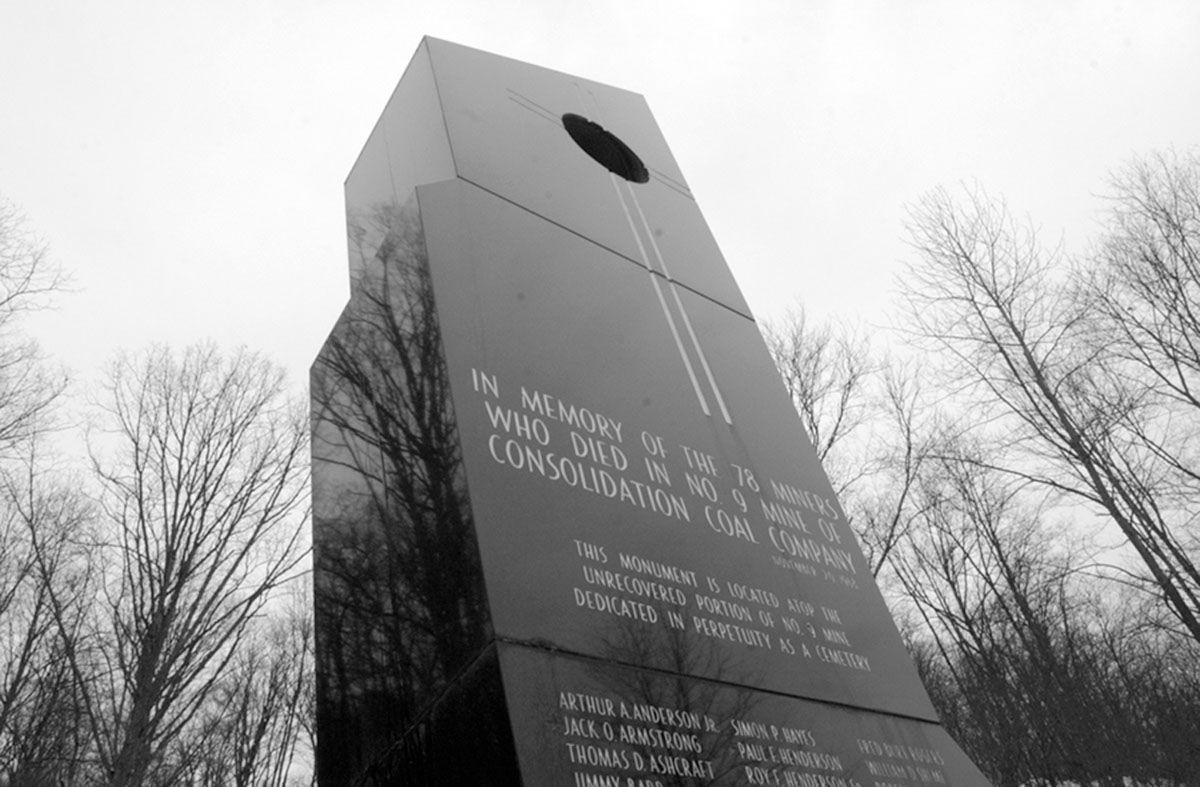 Each year, the loved ones of the No .9 miners gather to honor them at a memorial park that sits atop the abandoned mine.

Gary Martin (left) and Bud Hillberry (right) and an unidentified man are hoisted from the Farmington No. 9 mine. They were the last men to escape the disaster alive.

A recovery crew prepares to go underground at the No. 9 mine to begin looking for bodies.

Recovery workers unseal the opening to No. 9’s slope.

No. 9’s preparation plant operated near the No. 1 fan and the slope by which some men entered the mine.

A coal miner uses a flame safety lamp to check for methane in an underground mine. A flame grows in the lamp in the presence of methane.

The No. 1 fan shaft (large circular figure) sits next to No. 9’s preparation plant, where the coal was cleaned and loaded for shipping.

Each year, the loved ones of the No .9 miners gather to honor them at a memorial park that sits atop the abandoned mine.

The following story is from “Misfortune in the Mountains” and is printed here to commemorate the 47th anniversary of the Farmington Mine Disaster.

FAIRMONT — Rolling smoke, illuminated by flames, poured from the Llewellyn Run and Mod’s Run portals of the Farmington No. 9 mine on Nov. 20, 1968, after an explosion rocked the mine at 5:25 a.m. that day.

Following the explosion, 78 miners were trapped in the mine owned by Mountaineer Coal Co. at the time.

Reports from that day in the Fairmont Times, the Times West Virginian’s predecessor, state smoke and flames shot as high as 150 feet into the air and a threat of noxious gases filled the mine. Three subsequent explosions happened throughout the day until about 10 p.m., though mine rescue teams continued efforts to try to rescue all 78 men who were trapped.

Of the 99 men who went to work on the “cateye shift” at midnight that Tuesday in November, 21 made their way to safety following the explosions, five of which were taken to the hospital for treatment of smoke inhalation and injuries.

Six production crews of six men each were known to have been working on sections between the Llewellyn and Mod’s Run portals, and they were given scant chance of surviving the explosive forces that wrecked both facilities.

As officials organized the scene, family members of those on the shift waited anxiously to hear if their loved ones were alive.

It wasn’t until 10 p.m. on the day of the explosion that a list of those trapped in the mine was made available by coal company officials. That was due to the fact that personnel records were kept in the office at the Llewellyn portal. Those records couldn’t be reached because of the fire, smoke and wreckage at the facility, which was located four miles west of Mannington, West Virginia, and had been opened two years prior to the incident.

Other records in Mountaineer headquarters were searched during the day and a personal check on each miner carried on the rolls of the midnight shift was made.

Officials continued their planning efforts throughout the day, and no attempt to begin rescue operations was made. At the time, officials said it would have been necessary to wait until the fire, which apparently covered the mine between Llewellyn and Mod’s Run portals, at least two miles apart, “calms down.”

William Poundstone, then Consol’s executive vice president for operations, told the press later that day that rescue operations were still impossible because of the density of the fire.

Seven rescue teams at the time made of three from Federal No. 1 mine of Eastern Associated Coal Corp. at Grant Town, and one each from Mountaineer’s Loveridge, Williams, Robinson Run and Jordan mines, arrived on the scene before 9 a.m.

The teams remained on standby throughout the day. Additional crews were made available when a rotating shift system was established.

Since communication into the mine was totally lost by the explosion, Poundstone said there was no way of knowing if the miners inside were alive.

Poundstone said at the time, changes in ventilation had been made in an effort to calm the fire. It was understood that consisted of sealing the return air side of the Mod’s Run shaft, where the fan was blown out by a second explosion some 15 minutes after the original ignition.

Fresh air was going into the mine through the Mahan’s Run shaft. This flow was reported to have carried oxygen into the fire area. Officials didn’t want to shut all the fans off due to the chance that the miners were alive.

Multiple Farmington, West Virginia, residents, along with others residing in Fairmont, Barrackville and places surrounding the area, reported they either felt the concussion or heard the rumble of the underground blast.

Some of the debris from the explosion was thrown against cars of the miners working the cateye shift that were parked near the portal. The vehicles, soot covered and at times completely obscured by smoke, remained in the parking lot throughout the days following the incident.

At the time of the disaster, Michael Aloi was 10 years old and lived in Farmington.

Aloi, U.S. Magistrate judge for the Northern District of West Virginia, recalled the incident, stating that “the atmosphere was very surreal” following the explosions.

“Everyone had hope because that’s all you had,” he said.

Going to school in the following days, Aloi said there wasn’t a classroom where at least one student didn’t have a relative killed in the disaster.

To this day, when Aloi sees pictures from the disaster, it makes him sick to his stomach.

Farmington residents at the time reported a controversy about whether or not to seal the mine. Some thought it was a way of telling people that they were going to stop searching for survivors, and some thought it wasn’t safe to go any further.

By Nov. 28, eight days after the disaster, air samples showed there was no possible way to sustain human life inside the mine.

By Nov. 30, concrete was poured into the opening to seal off oxygen from the mine to stop the raging fire. That sealed the fate of the 78 men sill unaccounted for, and the hopes were dashed of friends and family members holding only fleeting possibilities of rescue.

In September 1969 the shafts were opened to recover the bodies of the mine disaster victims. After nine years of searching, teams were unable to locate the remains of 19 miners who are now forever entombed in the depths of the mine.

The disaster brought about big changes in mine safety regulations.

In 1969, the Federal Coal Mine Health and Safety Act was passed. It included provisions to increase the frequency of inspections, amplified federal enforcement powers and strengthened mine safety and health standards.

Eight years after the 1969 law, additional protections were created through the 1977 Federal Mine Safety and Health Act. The law came after additional tragedies at Scotia Mine in Kentucky and the Sunshine silver mine in Idaho.

Recently a lawsuit was filed by administrators of the estates of two miners killed in the explosion on behalf of themselves and the estates of 76 other miners.

In November 2014, Michael D. Michael and Judith A. Kuhn filed a class action suit in Marion County against Consolidated Coal and the estate of Alex Kovarbasich, who the plaintiffs said was the chief electrician at the No. 9 mine at the time of the explosion.

FAIRMONT — A class action lawsuit was filed late last week in Marion County, claiming that a…

The plaintiffs asked for $110,000 per member of the class action suit, interest and punitive damages “for the intentional, grossly negligent and reprehensible actions on the part of the defendants.”

The suit is partially based on a 1970 memo written by federal mine inspector Larry Layne, which states that a ventilation fan’s safety alarm was disabled prior to the explosion so “when the fan would stop or slow down, there was no way of anyone knowing about it because the alarm signal was bypassed,” the memo read.

The suit claims that on June 9, 2014, the identity of the person who intentionally made the fam alarm system inoperable was discovered and that “Kovarbasich was acting under the direction and control of defendant Consolidation Coal Co.”

The suit is ongoing in federal court.

An annual memorial service takes place at the Farmington No. 9 Mine Memorial on Flat Run Road in Mannington, just off U.S. 250.

Remembering No. 9: Original newspaper accounts of 1968 mine disaster

This is the original story that appeared in the Nov. 21, 1968, edition of the Fairmont Times…

Copies of “Misfortune in the Mountains: A Time Line of Tragedies that Shaped West Virginia” are available at the Times West Virginian. For more information, call 304-367-2500.

List of names of those killed in 1968 Farmington, WV No. 9 Mine Disaster