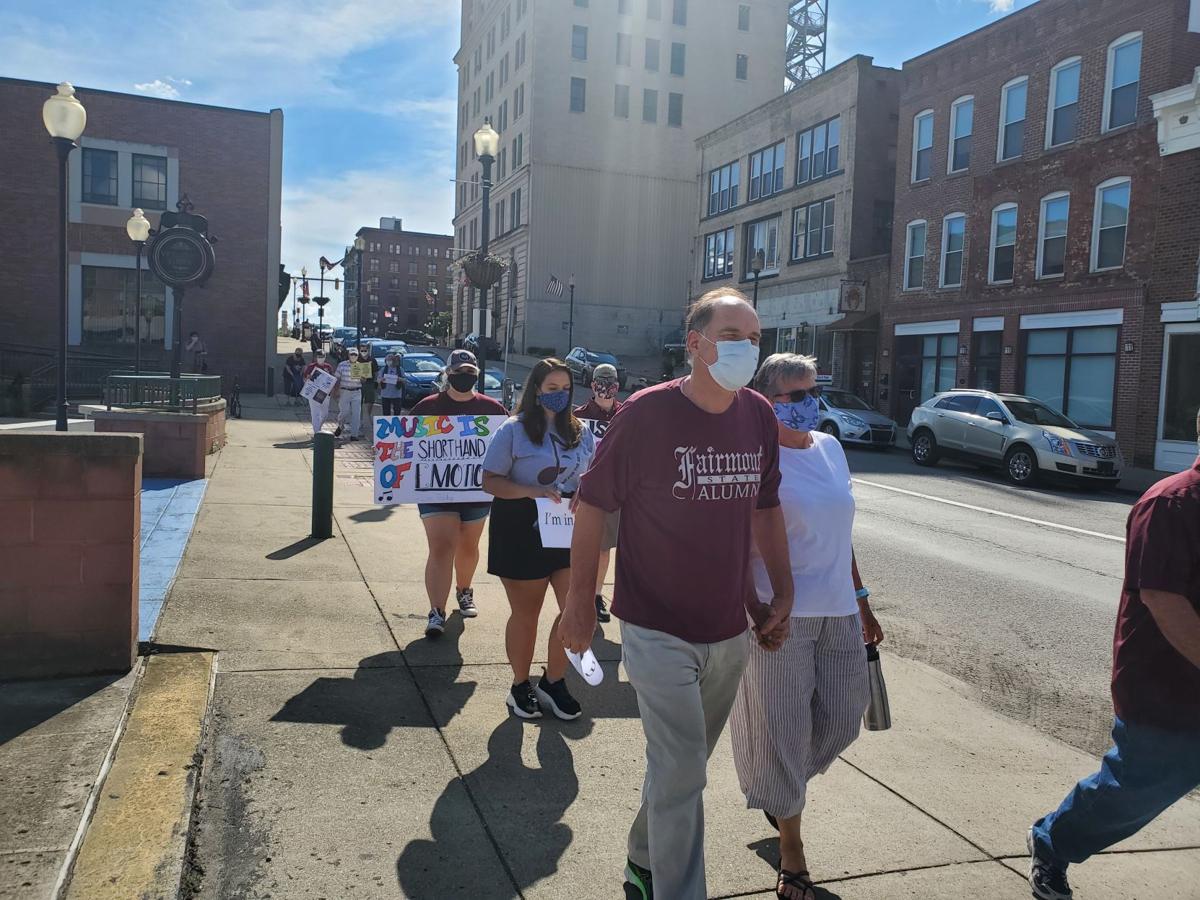 About 35 people attended a rally Monday is support of music and theater majors at Fairmont State, with some carrying signs down Adams Street. 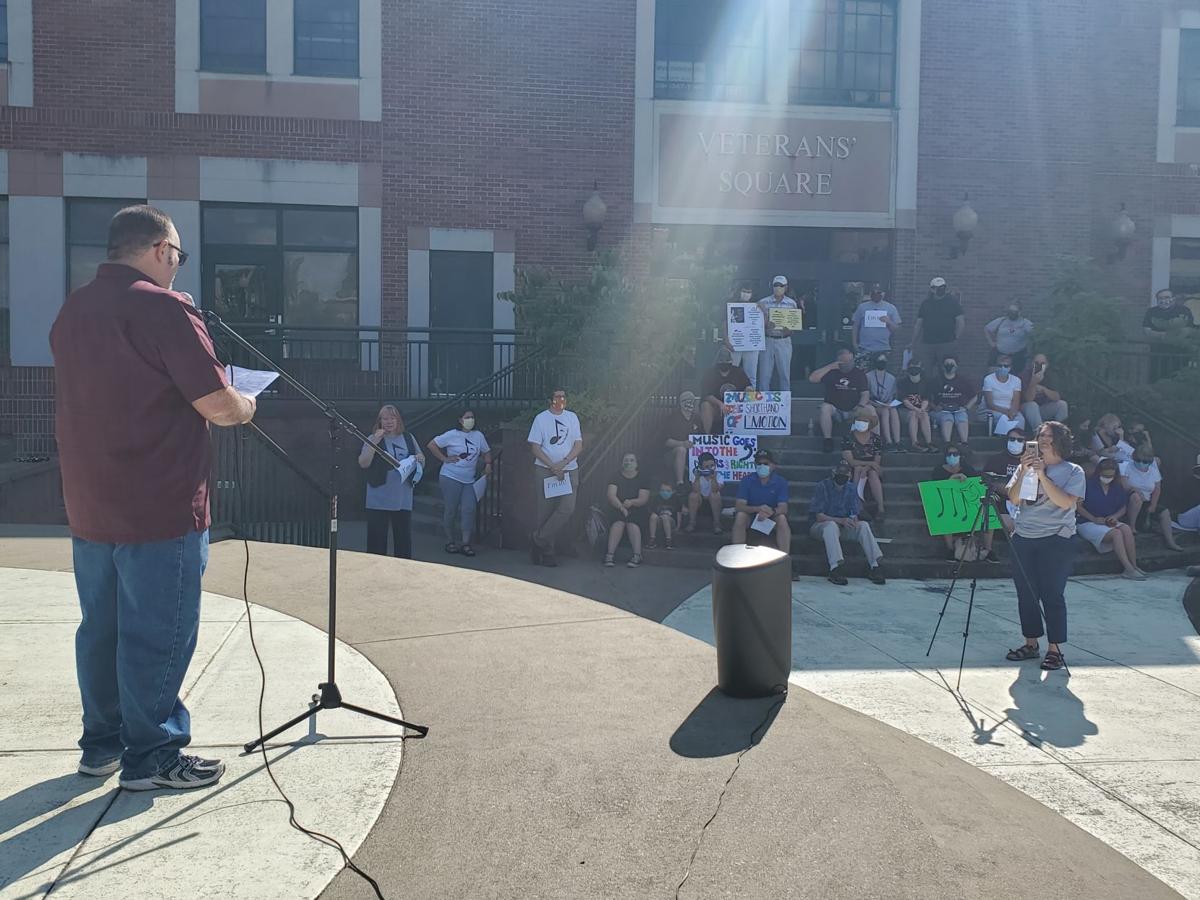 Sam Spears, director of choral and vocal activities at Fairmont State, left, speaks to a crowd at Veterans Square during a rally for the art majors at the university.

About 35 people attended a rally Monday is support of music and theater majors at Fairmont State, with some carrying signs down Adams Street.

Sam Spears, director of choral and vocal activities at Fairmont State, left, speaks to a crowd at Veterans Square during a rally for the art majors at the university.

FAIRMONT — Sam Spears, director of choral and vocal activities at Fairmont State University, said he will be losing his job at the end of the 2021 school year.

Spears’ job loss is a direct result of Fairmont State’s Board of Governors vote to end music and theatre degree programs at the school. The first vote was at a May 21 meeting, then again at a June 18 meeting.

At a rally led by Falcons for the Arts Monday in downtown Fairmont, Spears asked the crowd what this decision would look like if it was made about a school sports team.

“Imagine a sports team. That team’s school announces that they are going to cut almost the entire coaching staff... The team’s budget will be slashed all in an effort to re-imagine what sports can look like on their campus,” Spears said. “And, they look forward to increased support for the team from the local community. No one would believe for a second that a school that would do this, supports athletics.”

Falcons for the Arts is a group made up of community advocates who are fighting to reverse the board of governor’s decision on the programs. Some of the group’s leaders gave updates on what they planned to do next in their fight.

“We sent 30-days notice to the board of governors that we intend to file[for a restraining order]. We hope that maybe we can engage in a dialogue before we have to file anything again,” said Celi Oliveto, a member of Falcons for the Arts’ rapid response team, and theatre director at North Marion High. “We’re alleging that there were violations of the Governor Proceedings Act that weren’t followed correctly in the May 21 meeting. We hope that they would go back and review the programs from the beginning, involve the community in the decision, be more transparent about the process in which they communicate to the community.”

One reason the board made the decision to discontinue the music and theatre majors was because of the cost to maintain them versus the number of students who enroll and graduate from the programs each year. However, Oliveto said the costs the group found in 2019 program reviews don’t add up to the figure Fairmont State has claimed.

“We have a cost for the two programs,” Oliveto said. “They actually come from I think the 2019 program review for music and theatre, and those two numbers don’t add up to the $917,000 number that Fairmont State reported that they cost. We just want to find out where they’re getting that $917,042 number from.”

A group of about 35 people gathered in Veterans Square Monday afternoon, and walked down Adams Street with signs chanting about the importance of the arts programs.

Daniel Eichenbaum, assistant professor of music at Fairmont State, said the group demonstrated the importance of music and theatre in the community, because many of those who gathered had been students in the Fairmont State programs.

“We believe that a strong liberal arts university like Fairmont State deserves strong arts programs to give students a well-rounded education,” Eichenbaum said. “To look at that and say ‘There is no value there,’ is a swipe at the community at large.”

Eichenbaum also said the presence of arts appreciation courses at the university does not equate to programs that teach the arts themselves.

“Fairmont State would argue well, they do have their music appreciation and art and theatre appreciation classes,” Eichenbaum said. “We say ‘Yeah, but you’ve just taken out the rest of the music program. There’s not a lot of arts left on the campus.’”

Oliveto, too, has said repeatedly that the continued presence of programs like the Academy for the Arts at Fairmont State and the marching band will not be enough to provide students with opportunities for artistic engagement and performance. With no one to teach these programs at the school, students will not get the entire education around music or theatre.

“I think it really shows how much these programs are beloved in this community,” Oliveto said. “If they close down this program... There won’t be any more products coming out of that university to continue music and theatre, because we’re the ones that stick around and help make it happen.”

Eichenbaum echoed Oliveto, and said the faculty fighting to keep the programs aren’t in it for the jobs alone. They are in it to continue providing these opportunities to students and members of the community.

“We don’t go into music like this and theatre like this for the money,” Eichenbaum said. “We go into it because of our passion for it and because it’s a service to all these people in the community.”

While the future loss of his job is disappointing, Spears said the most disappointing aspect of the board of governor’s decision is that students who still attend Fairmont State for other programs may not get the music and theatre opportunities previously available to them. To him, that is the greatest loss.

“I am distressed, of course, to be losing my job,” Spears said. “What distresses me more is the students and this community will lose access to the educational, musical and artistic opportunities that Fairmont State music and theatre faculty have been facilitating, and have been doing for generations.”